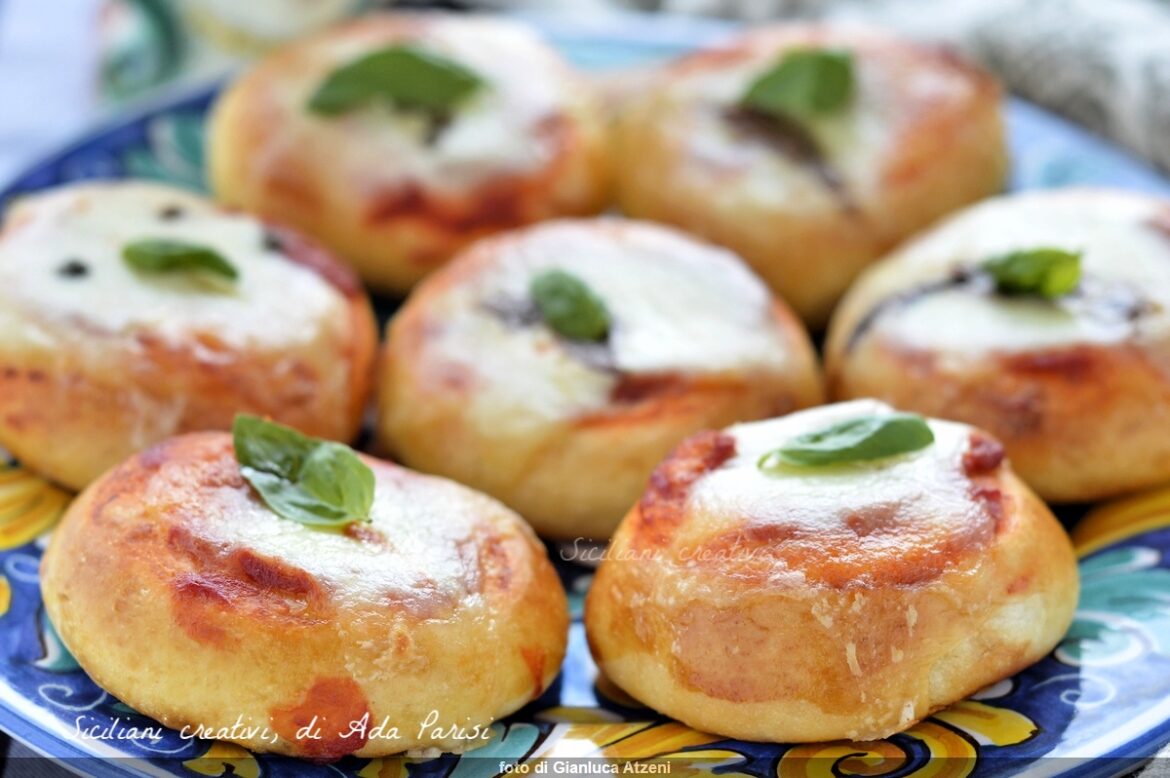 Anyone who is Sicilian or has been on holiday in Sicily will have come across Sicilian pizzas made with a special dough: soft, with a sweet aftertaste, lots of tomato and cheese. One pulls the other. These pizzas are part of those wonderful and tasty recipes of the Sicilian rotisserie, prepared with the traditional dial or bar dough. A flour-based dough, lard, Salt, water and sugar, a kind of soft brioche that becomes, from time to time and depending on the area of Sicily, pizza, rollò with wurstel, ravaized, rizzola, Calzone, baked pidon, driven away and much more. And I hope to be in time for you to prepare them for this First May in the house because of the health emergency.

Sicilian street food, rich in variations in every province, it's perhaps one of the hallmarks of my island. Its variety is such that it is almost impossible to know every single creation. From PANELLE function AI pythons Messina. In Messina the diner dough gives life to roll with wurstel, San Daniele and ham and cheese breeches, Mexican pizzas with scarola. Referring to the classic rotisserie version Focaccia MESSINESE with tuma and scarola. In Catania there are the rizzole, brioches stuffed with sauce and peas and fried. In addition to the famous driveway stuffed in a thousand ways. Palermo has the ravazza (equal to rizzole but baked) and all over Sicily there are flatbreads, pizzas, stuffed pizzas and breeches. All rotisserie pieces made with the mythical dial dough.

The secret of this soft and tasty dough is in the lard, which gives it an extraordinary softness and makes it easily workable. In addition to the presence of sugar: this dough, In fact, has a slight sweet tendency that makes it irresistible. Let's come to the leavening. As always I make a ripen in the refrigerator and a long leavening and then use little sourdough, or beer both fresh and dry.

But if you want faster rise, on the day, and without the stop in the refrigerator, then you'll have to increase the yeast (let's double the doses of yeast) and use a zero-type flour (00) instead of zero or Manitoba. Like this, after a first rise in bowl until doubling, you can form the rotisserie pieces directly and make them do the second leavening. You can make the dough by hand, but I advise you to use the the planetary, that will make your job a lot easier.

As for Sicilian pizzas with diner dough, are perhaps one of the most beloved pieces of rotisserie: the recipe only includes the use of tomato and mozzarella. But you can garnish them to taste with fresh basil or oregano, Capers, anchovies in oil, olives or ham. They are a must in the buffets (they're stealing) and jetted both in mignon version like the one I introduce you, both in maxi version. In the latter case they are practically a whole meal, although in Sicily they are more regarded as a 'breaker'’ to be consumed mid-morning or snacking. At this point, I remind you to have a look at all my SICILIAN RECIPES and I wish you good day. 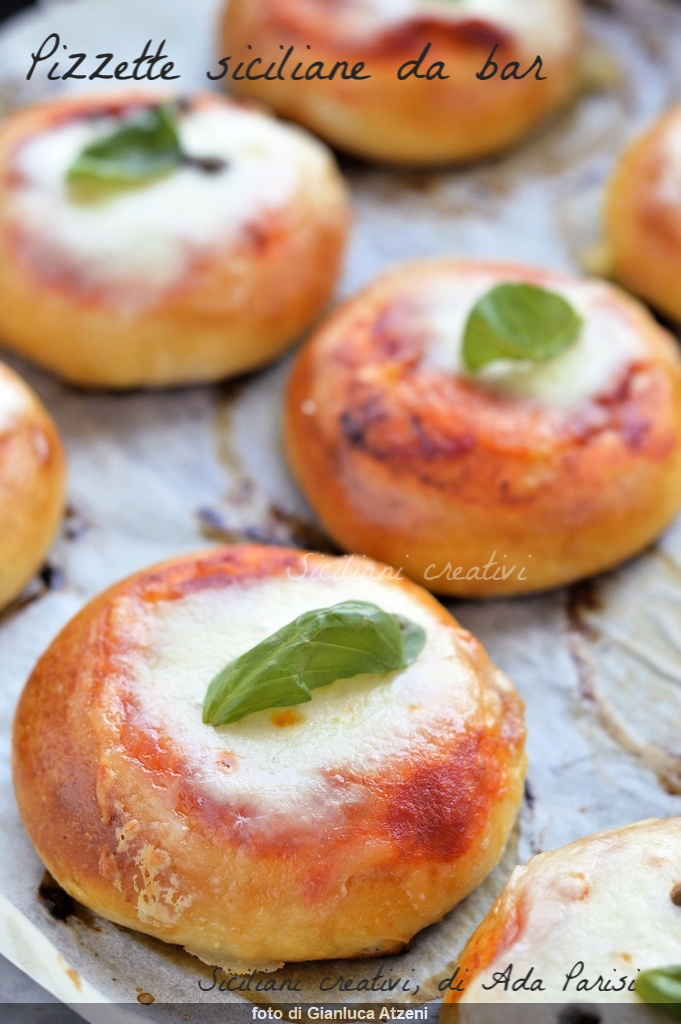 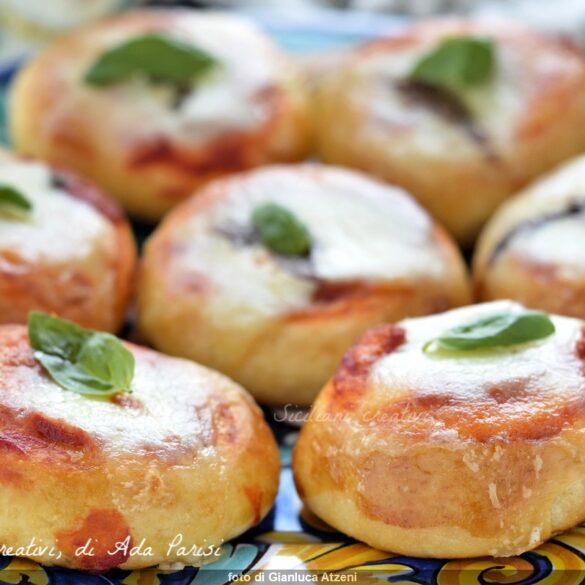 FOR THE SPECIAL DOUGH:

anchovies and capers to taste

an egg yolk and little milk to brush the pizzas 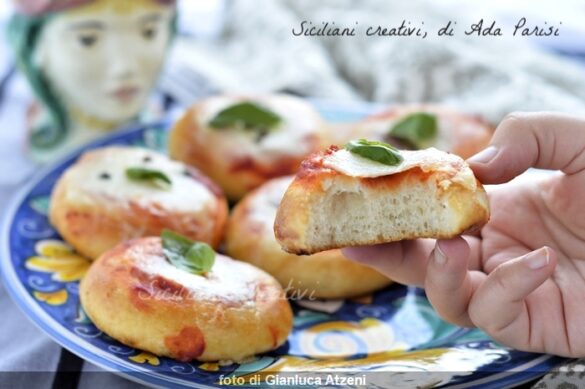 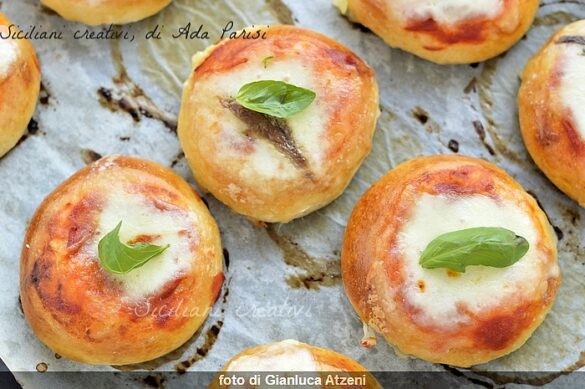 The diner dough is very simple to prepare. You can also work it by hand, but you'll need time, patience and elbow oil. If, instead, you have a planetarium, everything will be easier.

DOUGH WITH DRY BREWER'S YEAST. Put the sifted flour in the planetary, the dry yeast, sugar and salt. Add the water and start kneading at low speed until the water has been absorbed. When you've got a fairly homogeneous dough, add the lard slowly, in several takes. Work in the planetarium (or by hand) until the dough is smooth, homogeneous and strung. You will have to detach from the bowl. Once ready, put the diner dough on the work top and knead it for 5 minutes by hand, Vigorously. Put the dough in a bowl, cover with food film and refrigerate for 12-24 hours.

IMPASTO WITH SOUR OR FRESH BIRRA LIEVITO. Both of these types of yeast must be dissolved in water before being added to the dough. Water temperature should be 26-27 degrees (measure it with the indispensable Thermometer cooking) or at least use water at room temperature, never of refrigerator. Once the yeast has melted in water, you can add the liquid to the powders and proceed as I explained before. 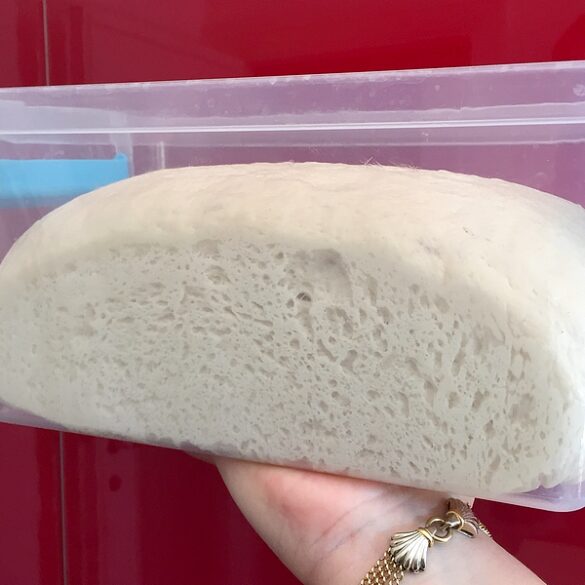 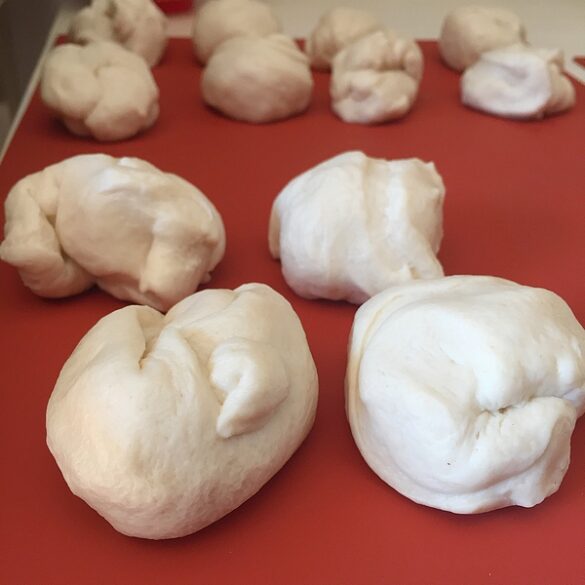 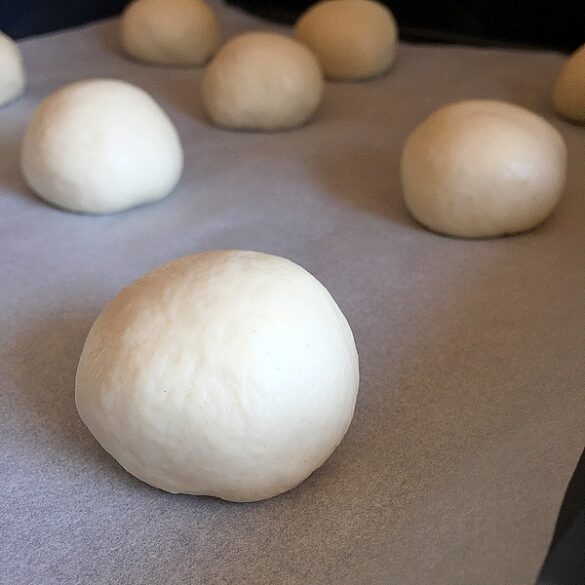 After resting in a refrigerator, put the dough in the oven with lit light to rise until doubled. Once doubled, divide the dough into small pieces weighing 50 grams each to make the pizzas mignon. Round each piece of dough until you get a smooth, even ball (pirlatura) and cover with plastic wrap. Leave to rise again until doubled. 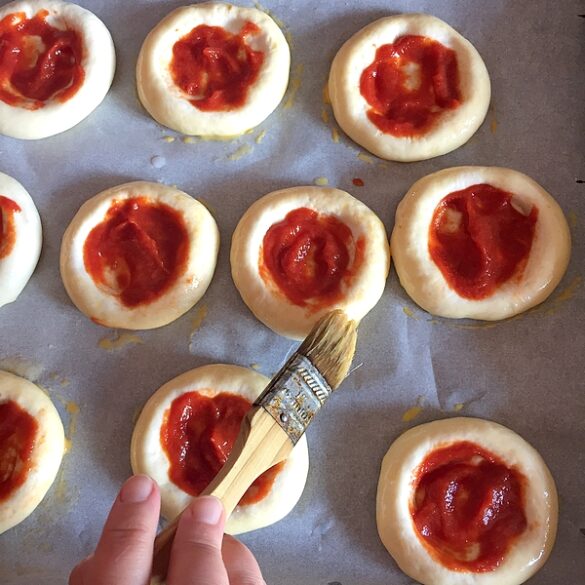 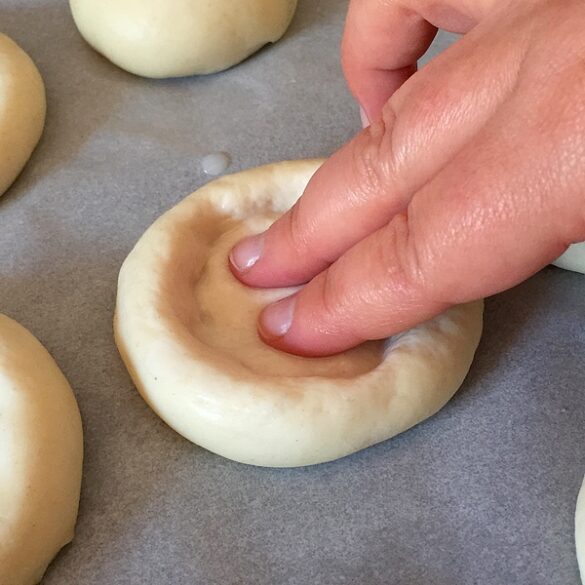 While the dough rises, put the tomato sauce in a pan with a drizzle of oil, salt and basil and cook for 10 minutes in order to restrict the sauce and reduce the presence of water inside the tomato. Slice the mozzarella (dab it well with paper towels) or the cheese you've chosen.

When the dough balls will be doubled, press in the center with your fingertips to deflate and enlarge them: you'll have to get a pizza with swollen edges and a cavity in the center. Spread a little tomato on the pizza (abundant, is the characteristic of soft Sicilian pizzas), cover with food film and leave to rise another 30 minutes.

Brush the edge of the pizzas with a little egg yolk mixed with milk.

Preheat the oven to 180 degrees static and bake the Sicilian pizzas for 10-12 minutes, until they are puffed and golden. Then add the cheese you have chosen and continue cooking for another 5 minutes or until the cheese is melted. If you want, you can add to the Sicilian pizzas an anchovy, some caper, olives, a pinch of oregano or a fresh basil leaf. Bon appétit!

ADVICE: Sicilian pizzas with diner dough are yummy both hot and fragrant, freshly made, both cold. You can also freeze them, Once cooked, and defrost them directly in the oven at 100 degrees.

Ada Bonjour! Your pizzas are beautiful! How many balls are obtained with this dough?
Thanks!

Hi Scarlett, thank you! Look accurately I can't tell you, but at least about twenty. It also depends on how big you make balls! A warm greeting
ADA

If I wanted to do them in the day how long it takes more or less to double? Just to know what time to start

Beatrice, if you use that amount you leave in about 3 hours

if I don't have the lard, what can I replace it with?

Erika, I would tell you to wait and buy lard. Not just for a matter of taste, but the dough's workability. In any case, you can use butter, but the taste will be different and it will be more complicated to work the dough. Let me know. ADA

Blessed the day I found your Ada blog… I adore you, You know that… I'll try your version of pizzas…
hello SIlvia

Silvia thank you very much. News aspect of the result. A warm greeting

Like my Galatea favorites (Palermo)… I never even thought I'd get close to that taste.. and instead they're pretty much the same!!! You're an Ada myth.. Thanks

My made a great compliment! And you've improved my day! A warm greeting, ADA