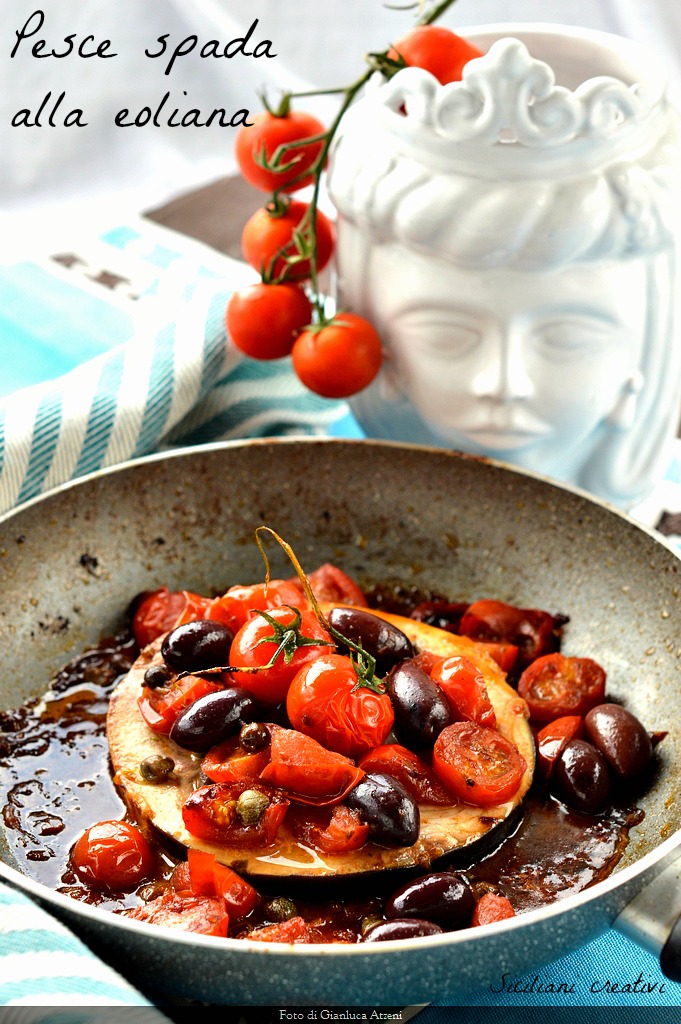 Sicilian Swordfish, or more specifically to the Eolian. The Aeolian swordfish is a second course of fish typical of Sicilian cuisine: widespread in the Aeolian islands, found virtually throughout the coastal Sicily. Today's recipe is for me one of the symbols of my summers and I'll show you step into VIDEO RECIPE on my YouTube channel. I'm from Messina, Since I was little, I remember the spadare that cross the Strait, between Sicily and Calabria, looking for this valuable fish. The swordfish eoliana, that has all the taste of the Mediterranean, is easy to prepare and has a unique taste, as long as you are attentive to cooking, to be short, otherwise the fish becomes stringy.

The seasonal swordfish is from May to October. Whereas before the gustavo for months, Today I'll give you that pretty much only when, the right time, I am in Sicily or, but very rarely, when here in Rome I find from my fishmonger trusted and I am certain that it is coming from the seas around the island of Ponza or Anzio. Although I love this fish literally, In fact, There are a few things you should know before you buy.

Swordfish, a very big size fish and live long, unfortunately suffers pollution of the seas and in its meats are deposited, over time, the molecules of methylmercury, toxic to the human body if taken in excessive doses. The swordfish consumption must, Therefore, be moderate (a weekly serving of one hundred grams) and it is better that children and pregnant women avoid it. The problem of the content of methyl-mercury is solved by purchasing young fish, small average size. 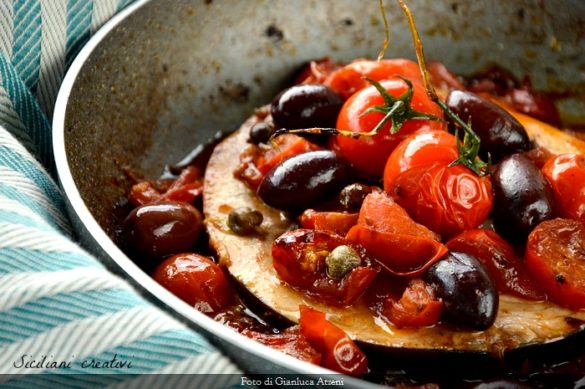 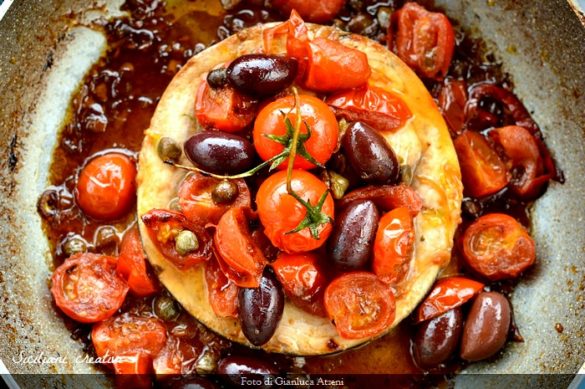 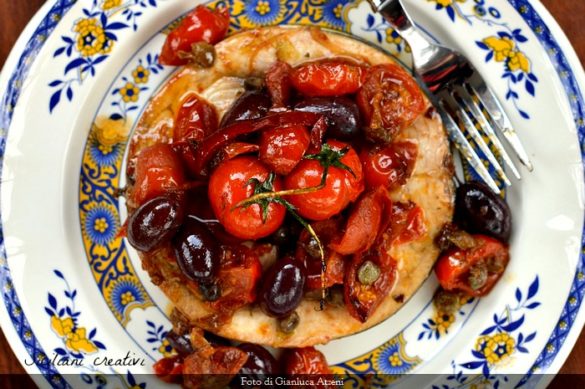 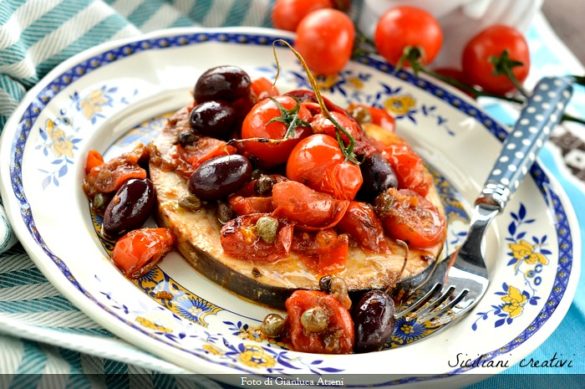 Capers in salt, to taste

green and black olives in brine, to taste

oregano fresh or dried, to taste

To prepare the swordfish Sicilian it really wants ten minutes of time. Look carefully VIDEO RECIPE with all the passages. Wash the tomatoes under running water and cut them in half. Desalt capers and dry. Slice the onion into thin slices.

Put in a pan a drizzle of extra virgin olive oil and the onion, cook on low heat until the onion becomes translucent. Add the Pachino tomatoes and raise the heat. Salt lightly and cook, always on high heat, for two or three minutes, until the tomatoes will not become slightly withered. Set aside the sauce of tomatoes and onion. 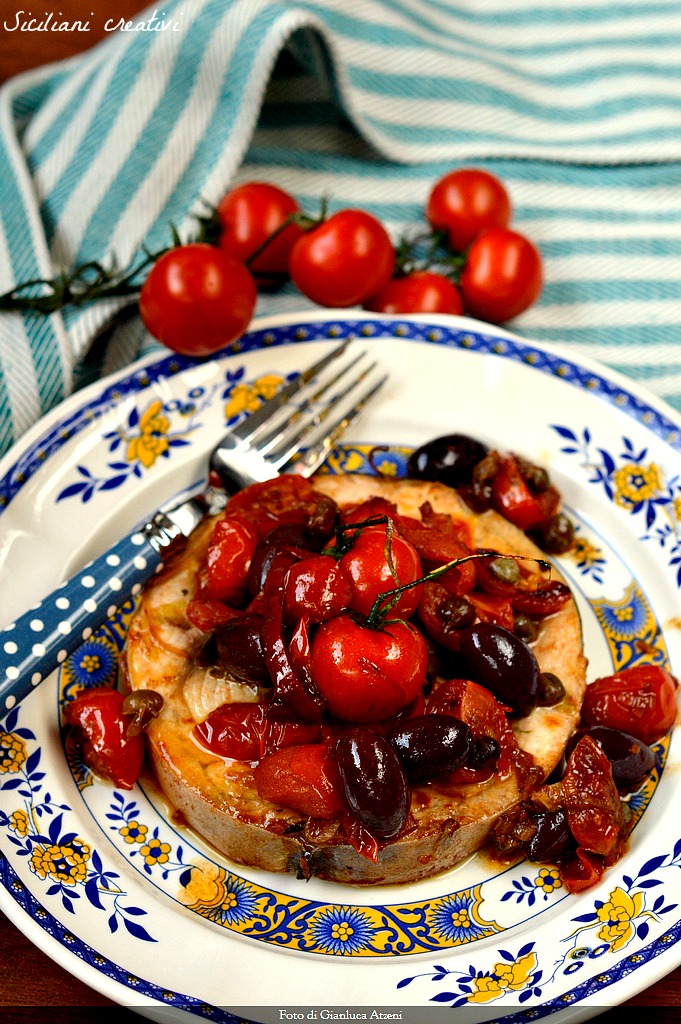 Add in the same pan a drizzle of extra virgin olive oil. Heat and place the swordfish. Fry on high flame for one minute. Turn the fish and brown on the other side. Season the fish and add the sauce of tomatoes that you previously put aside. Add the capers and whole olives. Cook over high heat, covered for 5 or 6 minutes, as you see in VIDEO RECIPE.

The only variable that you have to be careful in this dish is cooking fish: the swordfish, if cooked too long, becomes stringy and hard. The swordfish is a white and tender meat, it takes a very short cooking and at very high heat, in order to remain soft and juicy. For this reason I prefer to give a preventive cooking tomatoes, so that not Buttino their water in the pan by lowering the temperature and giving the fish that horrible sword 'boiled effect'.

MATCHING: Rosé of Etna "Poetry", produced by Cantine Valenti: smells of cherry and raspberry. The taste is very fresh and lively. A good match with this tasty recipe for this tasty wine made from vineyards on the northeast slopes of the volcano, around 750 meters above sea level.

Pie with vegetable in sweet and sour

My favorite
A big kiss