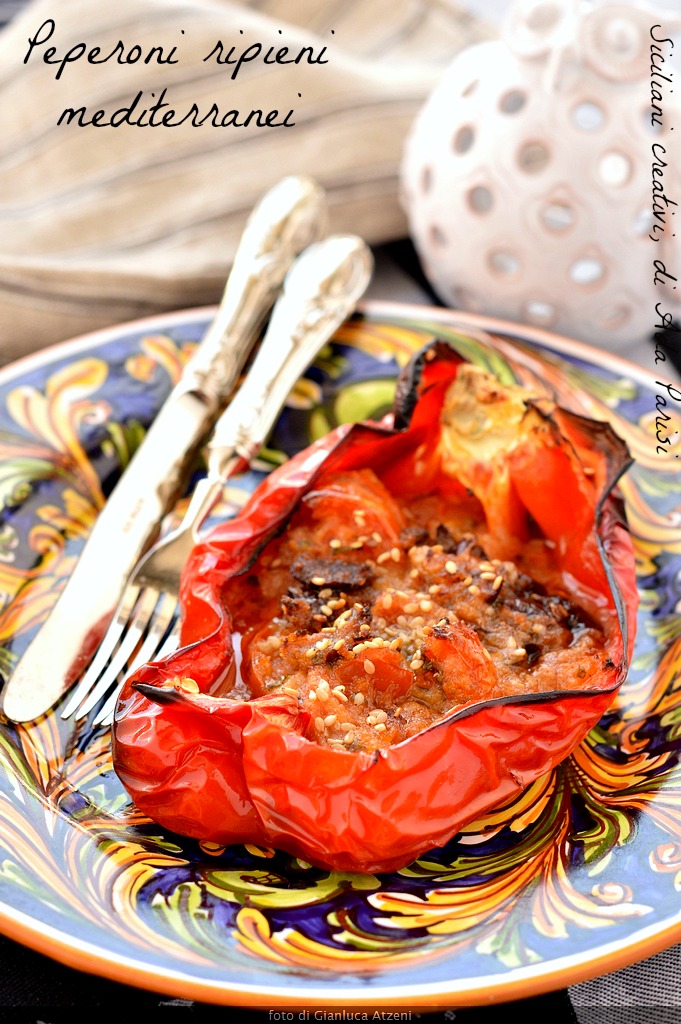 Baked stuffed peppers, a simple recipe that is a hymn to the Mediterranean. The stuffed peppers are a classic dish of vegetables Sicilian cuisine, used either as an appetizer or as a main summer, either hot or cold. Usually we use small round peppers, that they are quite hard to find outside Sicily, and we farciamo them with a filling made from breadcrumbs, cheese, oil and herbs.

This recipe, however, is different from traditional PEPPERS STUFFED SICILIAN. To prepare these fast stuffed peppers really takes a moment, You not need to fill them one by one, you can use any type of pepper (I used the classic long pepper), The filling is prepared in a moment and you only distribute the peppers with a spoon.

The recipe calls for the use of anchovies, but you can not put, thus you serve delicious vegetarian and vegan stuffed peppers. For the rest, the filling is made of simple ingredients: tomatoes, olives, Capers, herbs, crumbs and sesame bread. These peppers are hot but delicious cold sensational, perhaps accompanied by a tuna sauce, who marries beautifully with both the pepper is with the filling. At this point you just have to also watch VIDEO RECIPE fast peppers stuffed baked on my YOUTUBE CHANNEL (subscribe!). And have a look at all my RECIPES WITH PEPPERS to enjoy one of the most delicious vegetables of the summer and all my SICILIAN RECIPES. Have a good day! 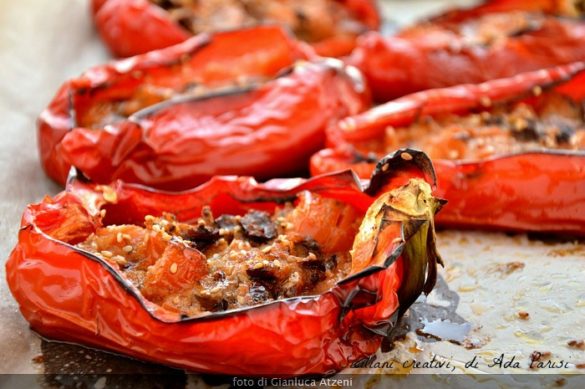 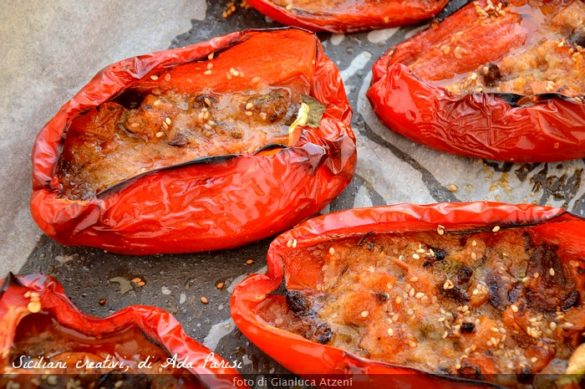 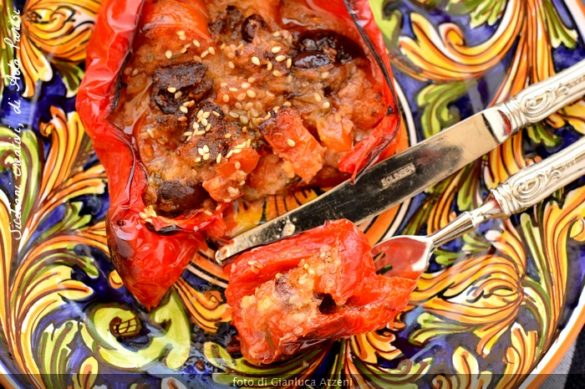 4 red peppers
4 San Marzano tomatoes or Perini not too ripe
8 anchovy fillets in oil
100 grams of bread crumbs
80 grams of black olives
Capers in salt, to taste
a small bunch of fresh herbs (oregano, Thyme, Basil, parsley, Mint)
extra virgin olive oil, to taste
the juice of half a lemon
salt and pepper, to taste
sesame seeds, to taste

Before starting to prepare baked stuffed peppers fast, Preheat oven to 180 degrees and look at the static VIDEO RECIPE fast peppers stuffed baked on my YOUTUBE CHANNEL. Wash the peppers, dry them and cut in half lengthwise. Anointing them with olive oil and season, both outside and inside, with a little salt. Put the peppers on a baking sheet lined with greased baking paper and sprinkled with a little salt until.

For the filling: wash the tomatoes, cut them in half and then into cubes. Finely chop the anchovies and capers, even then chop herbs (abundant, if you have not used the dry fresh oregano). Cut the olives into slices. Place the tomatoes in a bowl (avoid pouring vegetation water into it), herbs, capers and olives. Add the breadcrumbs and olive oil enough to blend the mixture. Season with salt and freshly ground black pepper. 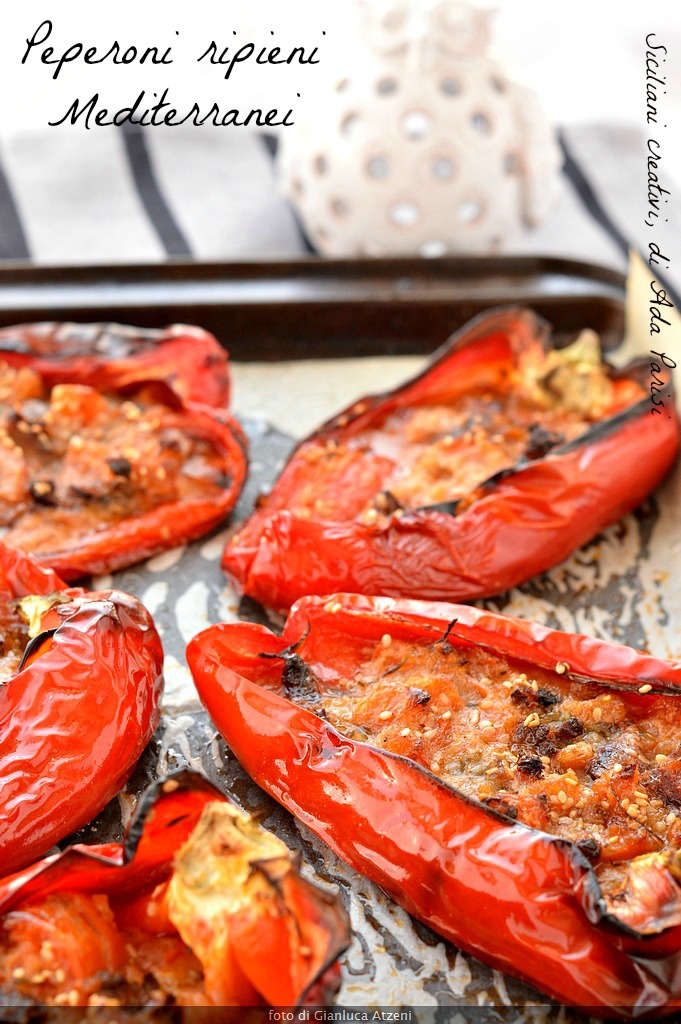 Spread the mixture inside the peppers, spray with a drizzle of oil and squeeze a few drops of lemon over it. Complete the peppers stuffed with sesame seeds. Bake in oven at 180 degrees for 40 minutes or until the peppers will not be soft, then put in the oven grill function for a few minutes so that the surface is formed a crust. You can enjoy fast peppers stuffed with hot oven, warm or cold, will still delicious. Bon appétit!

Dear Ada, now I make these your heart peppers and please note that I always check the recipes.
Of these peep after I prepared and run them to perfection.
Thanks always a warm greeting
Luciana

I'm so happy! Thank you and always a warm greeting, ADA

Hi Ada, I have all the ingredients and tomorrow I will do this wonderful dish. Thanks. From how to write looks like you throw in the oven peppers before you stuff them: did I get it right? If you for how long?
Thanks always dellla your succulent recipes
A hug
Luciana
Padova (but momentarily in Venice Lido)

Hello Luciana, first of all thank. And no you do not cook them first, I explain in the recipe that you simply have to cut grease seasoning peppers and place them on the baking sheet and preheat the oven, then in two minutes you make the filling and cook it all together. Let me know how it is, a warm greeting and say hello to Venice

Luciana I saw the result, fabulous. Thank you so much for sending me emails and photos. A hug. ADA

I love the baked peppers
Thanks
A big kiss