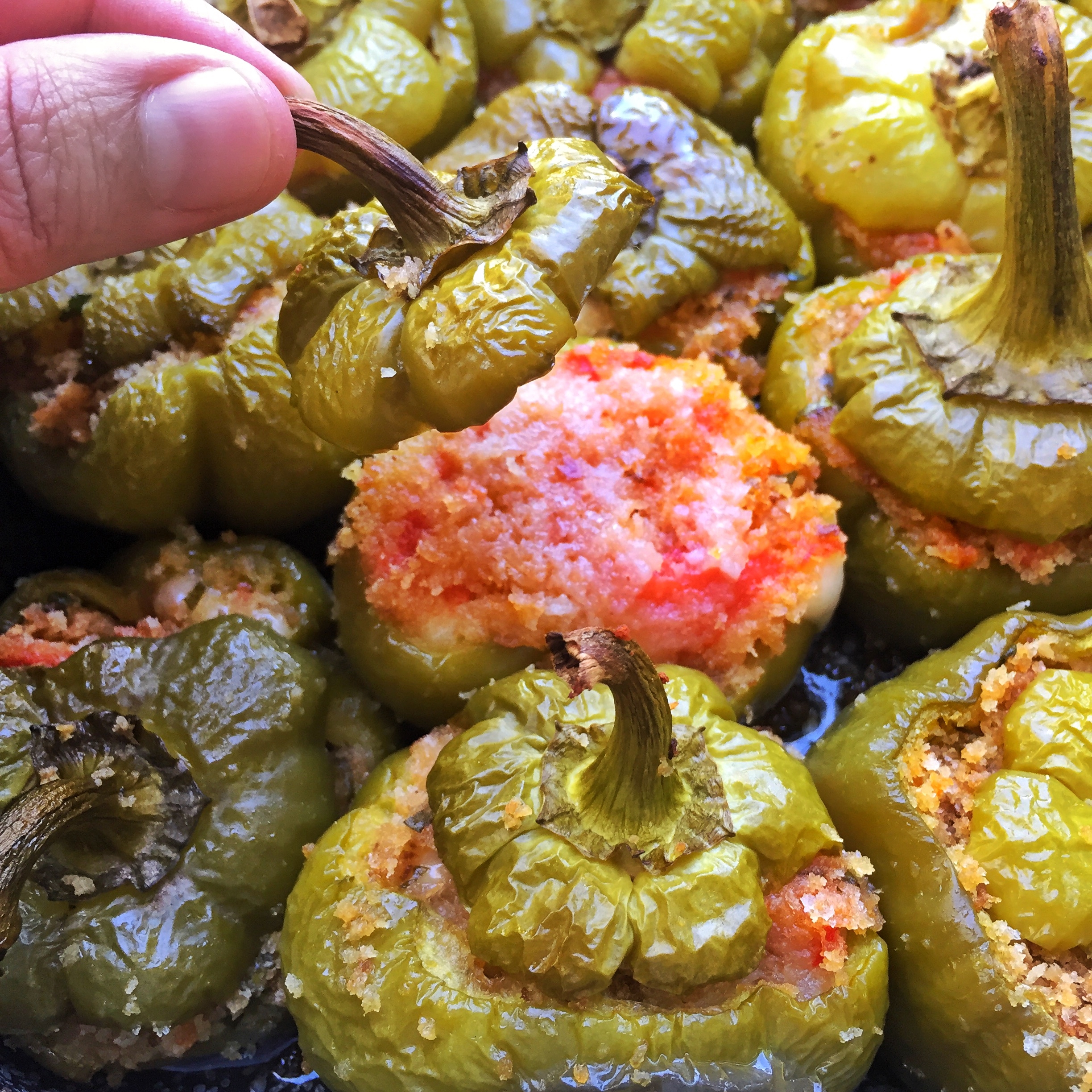 Today the recipe of the stuffed peppers Sicilian, which we call Buttoned peppers‘. One typical Sicilian recipe and all vegetarian but rich in flavor, I love preparing little round with peppers, sweet and tasty. On my You Tube Channel, to which I invite you to subscribe, you will also find the VIDEO RECIPE.

Among other things, we are right at the beginning of the pepper season. And this simple dish is another demonstration of how a traditionally rural and agricultural region like Sicily has managed to create masterpieces of taste and economy. Inside the stuffed peppers Sicilian is a fragrant and tasty stuffing of grated stale bread, parsley, parmigiano reggiano, pecorino siciliano, some small pieces of fresh tomatoes to give it moisture. I'll add also the provolone, typically using the Vastedda del Belice or provola di Montalbano, or the cheese. Is, If you like, you can add some chopped fillet of anchovies or capers from Pantelleria. The stuffed peppers are delicious warm but also cold, are exceptional when eaten the day after preparation.

If you like stuffed vegetables, I recommend (in season) also try Sicilian artichokes ammuddicati, the Tropea onions stuffed with sauce, the Champignon mushrooms ripienthe or the stuffed eggplant with tomato sauce, we call 'abbuttunate’ and do not forget to have a look at all my SICILIAN RECIPES. Have a good day! 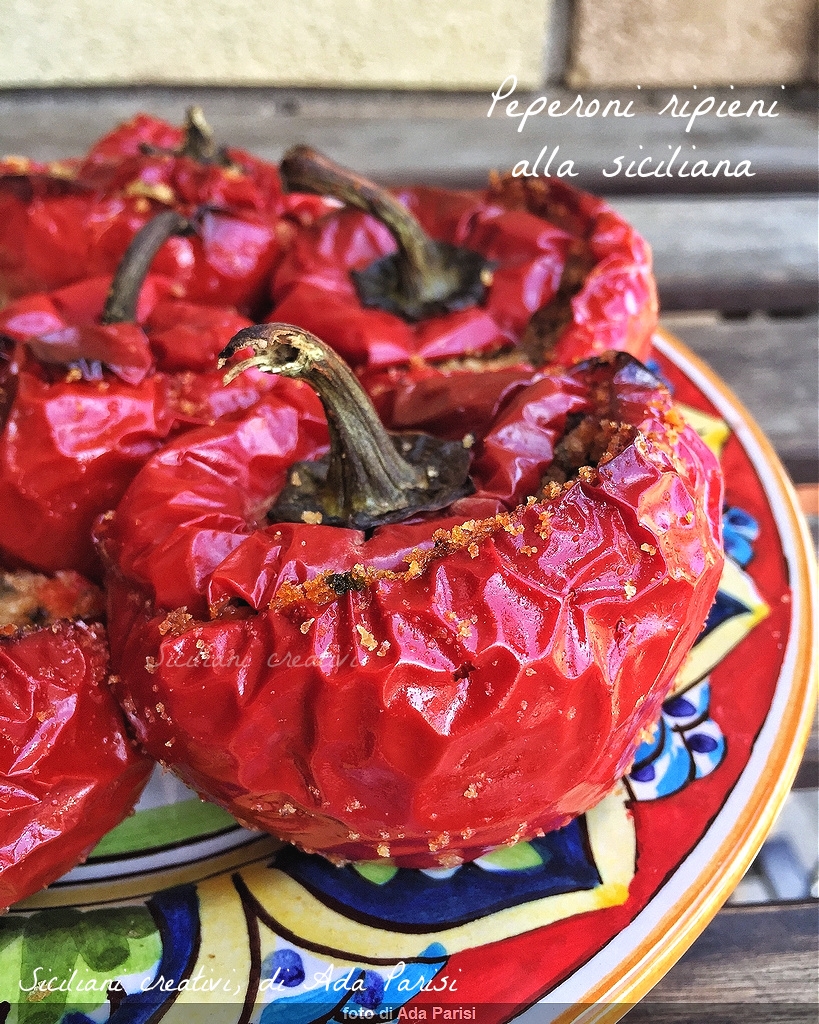 8 little round peppers to fill

a sprig of parsley

a small handful of capers (Optional) 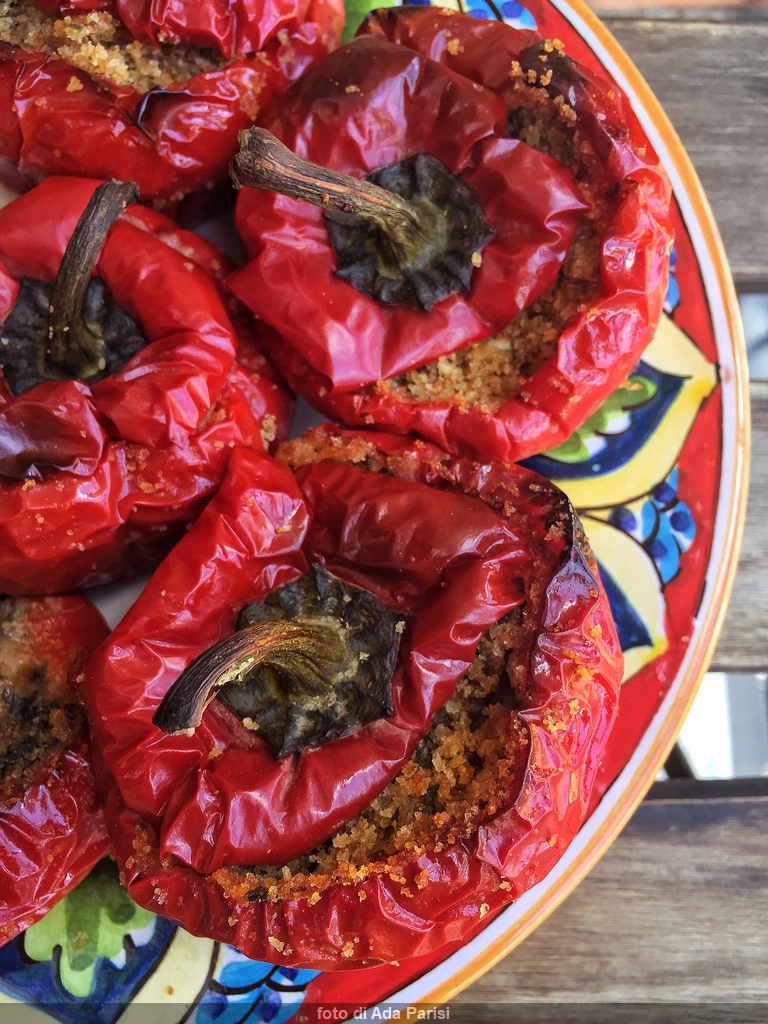 To prepare stuffed peppers Sicilian, after watching the VIDEO RECIPE you can find on my YouTube channel, wash the peppers, grooving with a knife to remove the upper part and set it aside; drain the peppers with care the seeds and white filaments.

In a bowl, prepare the filling by mixing the breadcrumbs, parsley and finely chopped capers (if you like). Add the grated pecorino and parmigiano, a pinch of salt and a grind of pepper and the tomato deprived of the peel and water of vegetation and cut into small cubes.

Then add to the mixture as much olive oil as required to moisten it all without making it ' sticky ': must be a grainy but soft stuffing. Just like the dough you see in my VIDEO RECIPE. Fill each pepper with a little filling, add a few cheese dadinos and then a little more stuffing, without pressing too much so that the filling remains soft.

Arrange the peppers in baking dish Sicilian, add their "lids" and cook for 20 minutes. Then scroll down to the breezy and bake another 5-10 minutes until the filling is golden, then bake.

Allow to cool peppers stuffed Sicilian and serve. The Sicilian stuffed peppers are also delicious the next day, in the unlikely event that someone's leftovers. Bon appétit! 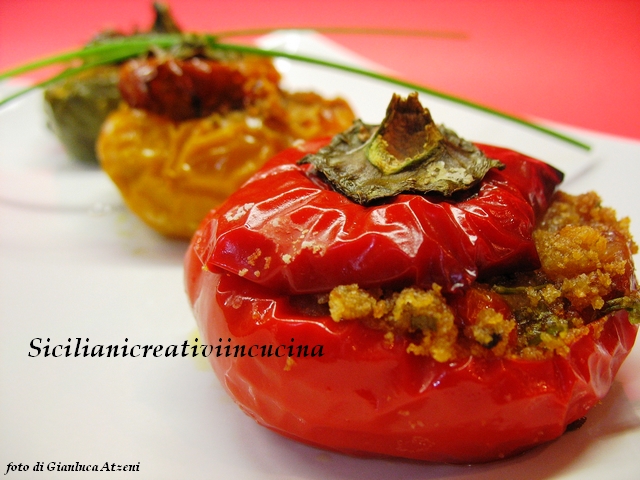 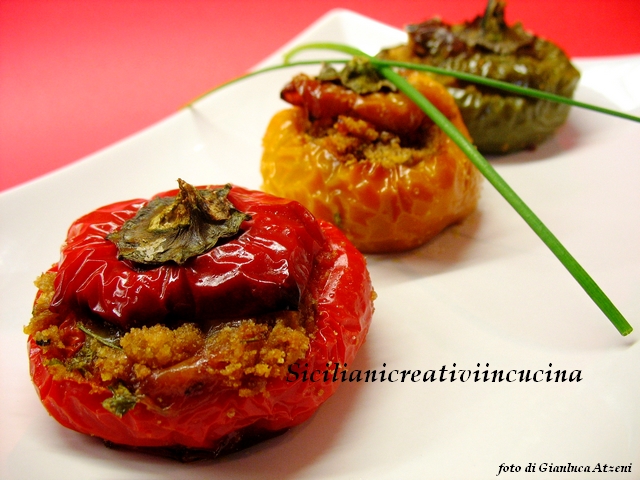 MATCHING: The stuffed peppers Sicilian combine well with a red wine, especially if siciliano, soft and round. We chose King Frederick, a PGI Avola produced by pupillo farm, in Syracuse.

Fiora I'm sure you're a Cook as good as me. From someone your son must have taken. Thanks always for your appreciation. Let me know of the frost of prickly pears. Kisses, ADA

Thank you for sharing this recipe Sicilian tradition and, in particular, of your family…prepare today for this delight, but with some variations, because I'm sure here I find those exquisite cheeses that I got to taste at land sicula.
A hug.

Hi Annie and thanks very much for your words. If you don't find the cheeses, You can retreat with honor on a provolone I have a smoked cheese not too cool. A pecorino romano, like grated cheese, However, it should be fine. I embrace you strong and until next time. ADA. Let me know!

I came across by accident, indeed nothing happens by chance! That yummy recipes. I'll start this dsa…. :)

Hi Valeria and welcome to my blog. We hope that the case has been favorable then, expect to know how it went! See you soon, ADA

Unless the recipe in “Favorites” :))

Dear Maurizia, in your hands will be delicious! I embrace you, ADA

We named so…My Favorites are melingiane and abbuttunate…but the peppers are equally fantastic! fabulous ada! Congratulations my dear

Aleeee!!! I also love the mulinciane abbuttunate!!!! We bake with tomato sauce and Mint… buonissimeeee!!! I kiss you strong dear!

If I find the peppers I already tomorrow I draw too , they are beautiful and definitely yummy

Anna dear thanks! The mother's and grandmother's recipe, It is the classic peppers alla siciliana, wishing you can also add a bit of anchovy if you like. A big hug. ADA

“Awesome!” …
Told by my son is the greatest.
Hello,ADA.

Hi Ferdinand! Thank you that you have prepared!! Already a little boy eating the peppers makes me cheer! A hug!