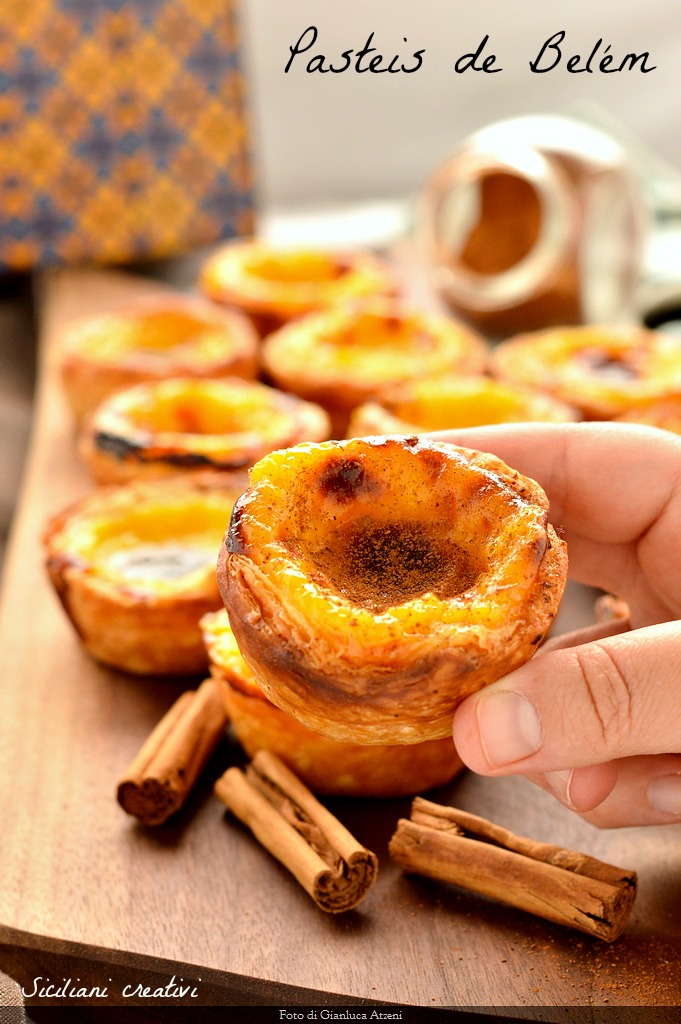 Pasteis de nata in the original recipe Portuguese. Born which in Portuguese means 'cream'. I can not say that today's recipe is easy to prepare and that all in a bowl. This recipe is dedicated to food lovers and those who have been in Lisbon and returned with pasteis in the heart. The original Portuguese recipe of pasteis de nata (or the pastel de Belém, the name has been registered and is a trademark owned by the shop Pastel de Belém that is in the eponymous neighborhood of Belém in Lisbon) It is long: We must make the pastry and make it in a particular way. But the result is wonderful. And the real gem is the VIDEO RECIPE OF pasteis de nata on my You Tube Channel: a step by step as I show you all the tricks and all the secrets to make pasteis de nata identical to the original Portuguese.

No and no custard puff pastry: the original recipe of pasteis de nata is this

Anyone who has been in Portugal, and especially in Lisbon, you will be in love with these little, gourmet pastries baked in the oven, the crispy shell, stuffed with a soft cream and fragrant cinnamon. Recreate pasteis de nata in Italy, following one of the many recipes you find online, It is honestly impossible. Because the recipes are incorrect. The suggested puff pastry is almost always pre-made and has nothing to do with the pastry of Portuguese pasteis de nata.

Using the puff pastry will not get a compact and crispy shell, but a shell peeled, unleavened, crumbled. On the other hand, the pastry of pasteis is not even PASTA CLASSIC BROWSE It does at home, but a different recipe. Even the cream of pasteis de nata has nothing to do with CUSTARD Traditional and even with baking cream, which it is indicated in most of the online Italian recipes. To recreate that unique taste, I documented thoroughly and I watched videos and translated recipes of Portuguese confectioners and bakers. Until you find the perfect combination for me. Up to regain my pasteis de nata in the taste of the original ones.

If you still want to do it, be patient and invite friends for a coffee with pasteis de nata: It will be an unforgettable coffee. This dose will get about 30 pasteis de nata (or the pastel de Belém), but if you met for the first time I recommend you to halve all doses, to manage the process faster and easier. And do not say you do not love. Have a good day. 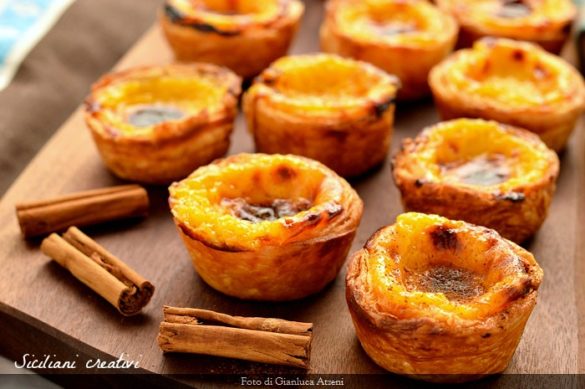 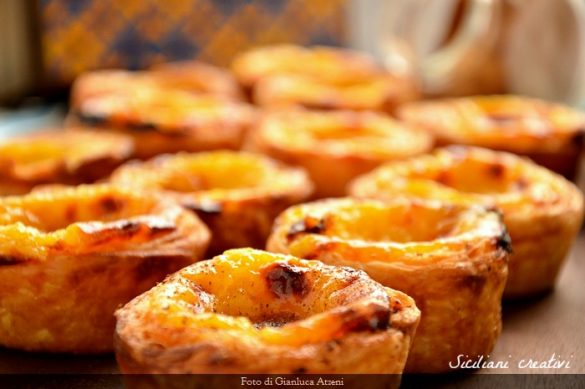 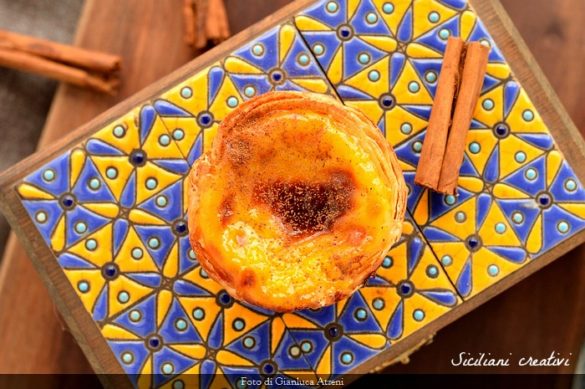 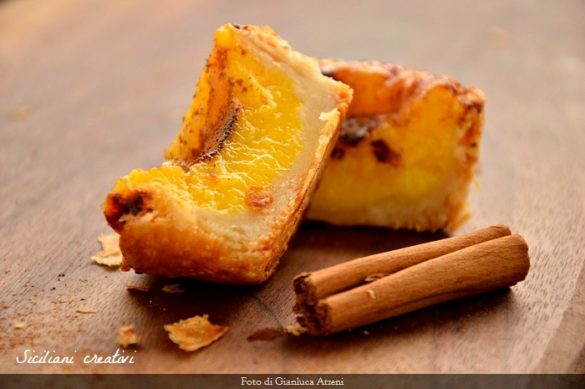 a large pinch of salt

cinnamon to sprinkle the pasteis de Belém, to taste

For PUFF PASTRY: put the flour on the work surface. Add a large pinch of salt. Combine the water working until you get a smooth dough without lumps. Wrap the dough in the food film and let it rest for at least 30 minutes at room temperature. When the dough is elastic, spread it with a rolling pin on a lightly floured work surface: you have to get the shape of a rectangle, often about half a millimeter.

Making again a turn three, wrap the dough in plastic wrap and store in the refrigerator for 1 hour. Spread the panetto in rectangle form for the last time and spread over the rectangle, in a uniform manner and coming up to the edges, softened butter left.

At this point, you have to roll up the rectangle tightly on itself, with a slightly oblique twist of the dough, until obtaining a cord. Wrap the dough in plastic wrap and place in the freezer for 30-40 minutes. After the interval of rest, cut the cord in thick pieces 2 centimeters. Put each piece of puff pastry in the molds (not buttered, not needed) and, with fingers moistened with cold water, press the dough from the center with a circular movement, to make it adhere to the edges and the sides of the molds: the pastry must be slightly above the edge of the mold. Store the moulds with the dough for the pasteis in the refrigerator until the time of use. 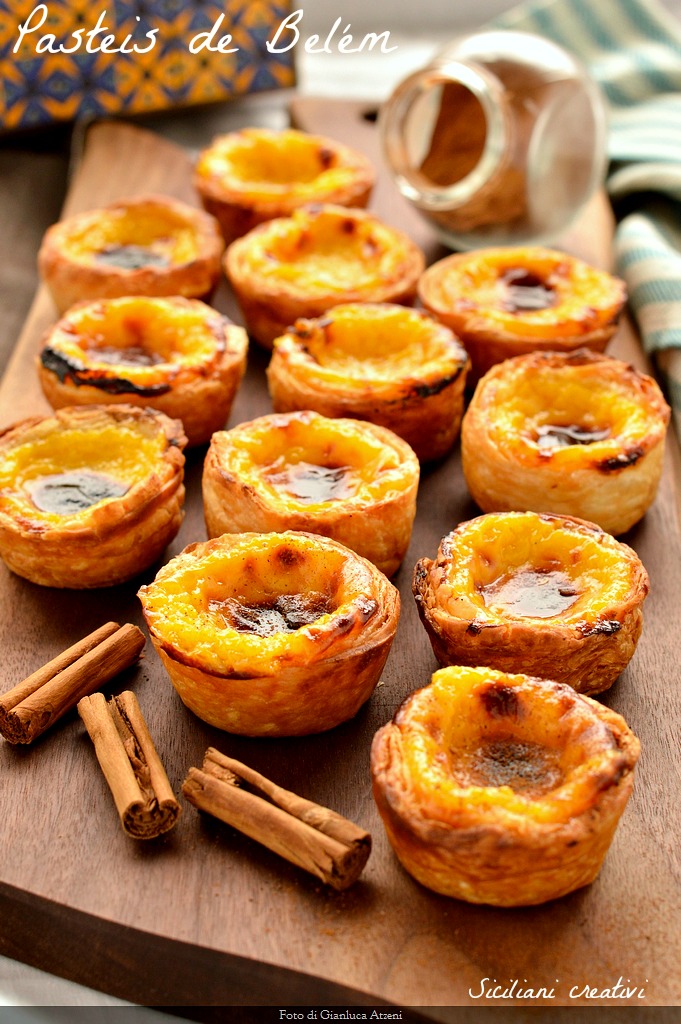 To prepare LCREAM of the pasteis de nata, you need to do before a sugar syrup: pour the water into a saucepan, sugar, add cinnamon and lemon zest. Boil the liquid and boil for a minute. Turn off the heat and let cool.

Mix the flour and cornstarch, Then add a pinch of salt and slowly add whole milk up to first create a sort of batter and then a mixture without lumps. Cook the mixture of flour, altte and salt on the fire until it will thicken. Pour this cream in a bowl. Pour flush cream in the mixture of water and sugar previously prepared, stirring with a whisk in order to obtain a homogeneous liquid without lumps. Add the egg yolks and whole eggs and, stirring constantly with a whisk, mix well. You will get a compound rather liquid: it's correct.

Preheat oven to 230 degrees static. Pour the cream for the pastais de nata inside the molds, reaching almost to the edge. Bake for 30 minutes and then continue cooking for 2-3 minutes depending on grill, so that the custard Gratini slightly. Once the pasteis de nata are cooked, immediately remove them from the molds and let cool on a wire rack. When ready to serve, sprinkle the pasteis de nata with a little cinnamon: savor the warm pasteis de nata, It will be a wonderful experience. Have a good day!

ADVICE: To cook the pasteis de nata can use the muffin tins. I do not recommend those single portion aluminum because they are too big and will get the giant pasteis, with longer cooking times.

Hello Ada,
I'll test your recipe, I have a very good memory of this specialty of Belém served barely warm, I'll tell you if it's close to the one tasted in Lisbon.
Beautiful afternoon
Friendly thoughts Maïté

I'd love to hear from you. It's a recipe I've worked on a lot, and I think I managed to recreate the original taste. A warm welcome, ADA

My darling, devo ammettere che già dalla foto i tuoi pasteis ricordano gli originali in maniera inconfutabile, Lisbona è nel mio cuore, it is one of the most bewitching cities I have visited and the pasteis eaten in Belem in the famous pastry cradle of the sweet in question are unrivaled anywhere else in Lisbon has taken them ; Thank you for the effort you have dedicated to this recipe, will be put in my casket of “to do” in a particular place.
One kiss

Dear thanks. I worked hard to recreate that taste, but above all I watched dozens of videos and recipes in Portuguese. For me the result is perfect, I'm proud of it. I'd like to have your opinion. A big hug, ADA

Hello and thank you for the recipe. I can prepare the cream the day before and put it in the fridge in a jar to cook the pasteis the next day?

Hello. I think so, but not having tried it I can't give you certainty. I still don't see any difficulties. Remember to mix very well before pouring it into the flakes. Let me know. ADA

Congratulations! For the dough was there almost, but the filling was on the wrong track. This really reminds me Ericeira! Thanks

Hi Davide, It is a recipe on which I studied so much and I've published because I was sure of the result. Your words confirm I had made the correct choice. Thanks. And see you soon. ADA

I wanted to try my hand at it and this recipe was the one that inspired me the most, and I made center! Congratulations and thank you very much for all the tips, the pasteis came perfect! With my eyes closed, I returned to Belém

Hello Gloria, make me happy because I'm so proud of this recipe, that I created stubbornly by trying it and documenting myself. When I say that it is the only real recipe in Italian of pasteis de nata not a joke. I'm really happy! Thanks, ADA

ADA, Today I followed your recipe of pasteis de nata and the result was exceptional: really good. Thank you, then, not only for the recipe, but also for the video on youtube because, not being an expert in the kitchen, It helped me a lot during the preparation!

I'm so happy! Is’ a recipe a bit’ long but I care very much because I have done so many times to make them as similar as possible to the original. Thank you for having tried! ADA

Hi Ada,thanks for the recipe for Pasteis
I should make a certain amount quite frequently,I could use the dough tell that found commercially
Thanks

Hi Monica, No, You honestly can not use the phyllo dough. To get the pasteis as similar as possible to those of Lisbon you should make pasta dough, and not good even that bought it because the result is completely different. Then of course my advice is, You do as you are better. Please try the phyllo dough and, since you were in Lisbon recently, you will see the difference alone. Let me know.

Take home from Lisbon they have conquered all
The problem was the pastry,but with your recipe will be fabulous. Thanks

Super delicious
Thanks
A big kiss

Thank you Dear, certain, eaten in LIsbona are even better….

They are fabulous, With great joy I was able to play the pasteis I ate in Lisbon and I'm so happy! If you do let me know! ADA