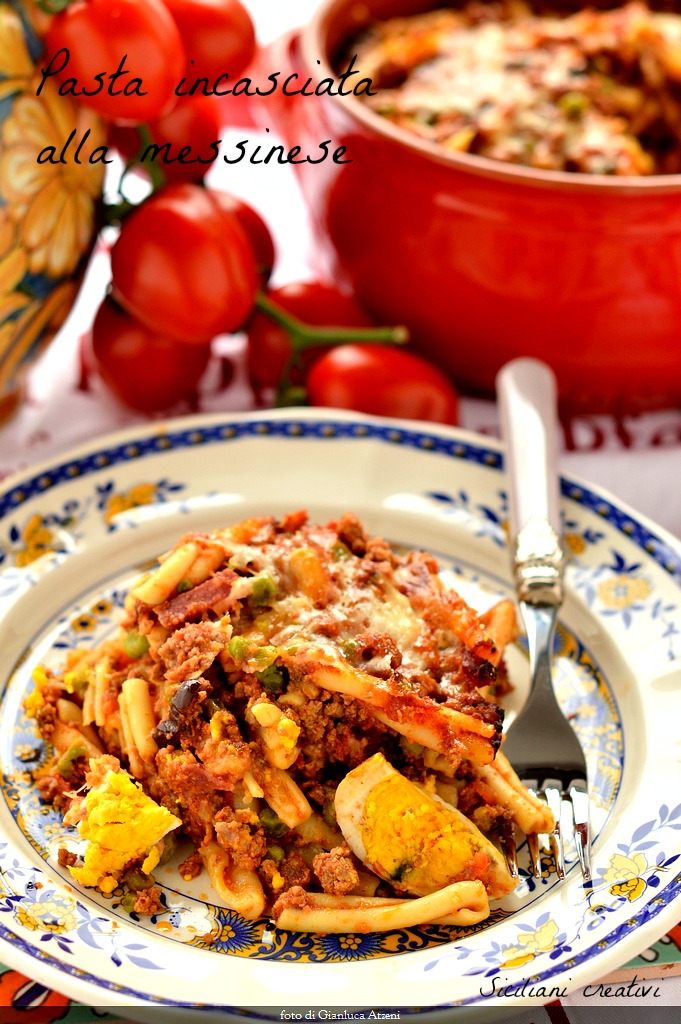 The pasta 'ncasciata Messinese it's an rtypical sicilian cuisine and precisely of my city, Messina. This is the authentic and traditional recipe, as handed down by generations La incasciata paste has become famous because it is often and willingly present on the table of the Commissioner Montalbano. The policeman devised by the master Andrea Camilleri, who died in July 2019, and masterfully played by Luca Zingaretti. The steaming trays of pasta 'ncasciata that prepares the faithful Adelina have introduced this dish to all Italy, but the pasta 'ncasciata has always been at the heart of Messina. In practice, is messinese's rival of the TIMBALE anelletti TO PALERMITANA (take a look also at the VIDEO RECIPE)

Pasta 'ncasciata alla messinese it's the party plate, Sunday, and the signature dish of August Messina. With pasta ‘ncasciata in Messina we celebrate the’Assumption and the Vara, one of the most colorful festivals of the city of the Strait. The recipe is presented today with numerous variations than the original, which he provided a sauce prepared with beef patties, chicken and chicken livers. With the sauce condiva the pasta and the meat was being served as a main dish. Today in the Messina 'ncasciata pasta is rigorously seasoned with meat sauce, also to mark the difference with the baked pasta and timballi the palermitano.

The name ” ‘cashed or cashed-in” could have two derivations, the first from the terracotta pan in which the pasta was cooked directly on the embers, the second from caciocavallo that covered creating a tasty crust. Today, cooking in the coals was replaced by oven, but it remains (where possible) the tradition of baking pasta ‘ncasciata with Mexican in terracotta containers. As for the shapes of pasta, those traditionally used are the meshes of maccheroncini, the Spaccatelle, sedanini or casarecce (more modern interpretation). All smooth formats: I have a strong preference for casarecce, which hold much better cooking.

Inside, then and now, local salami, cheese and / or provolone Nebrodi, Sicilian Style canestrato (do not use the Parmesan because Sicilian has nothing), peas (there is no unanimity on their use) and of course the inevitable fried eggplant. The vessel in which was cooked pasta was greased with the lard and then dusted with breadcrumbs. I used the extra virgin olive oil. The recipe is a little’ laboriously, but it's worth it. If you start now you are able to enjoy it for August. Take a look also to all my SICILIAN RECIPES and, if you like eggplant, my RECIPES WITH EGGPLANT. Have a good day! 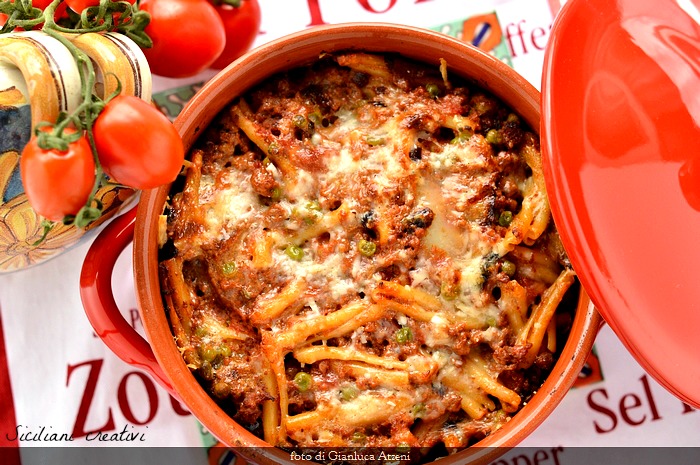 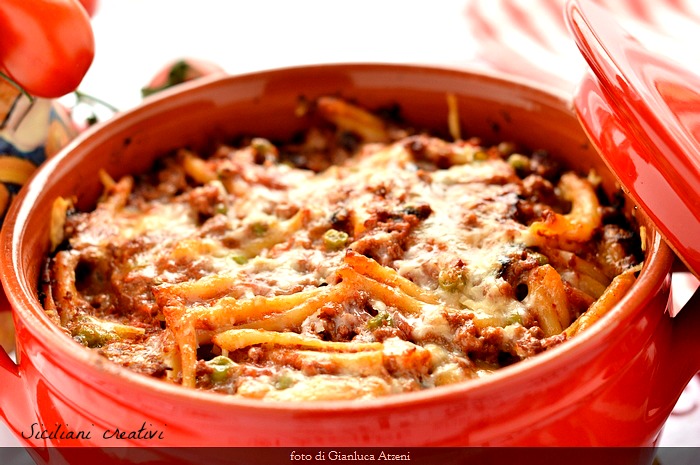 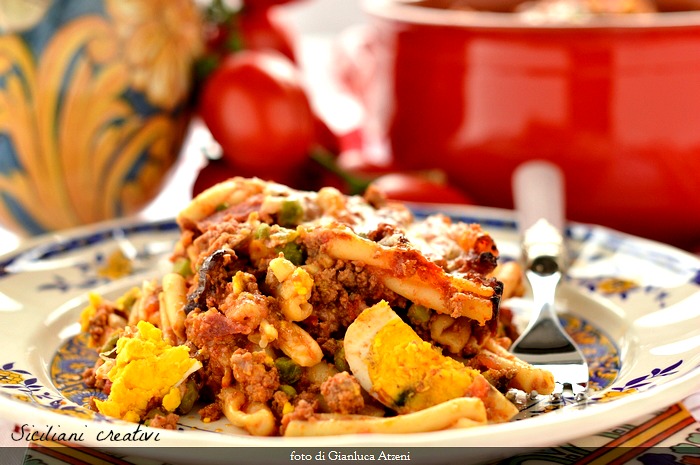 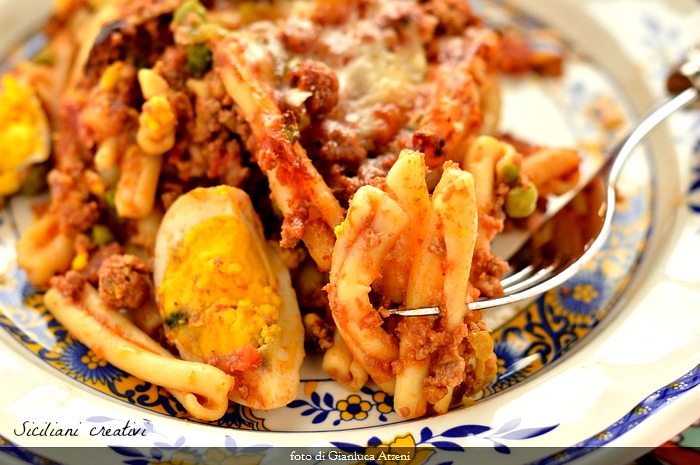 3 Eggplant (I use the violet Messina)

peanut oil to fry the eggplant, to taste

breadcrumbs to coat the pan, to taste 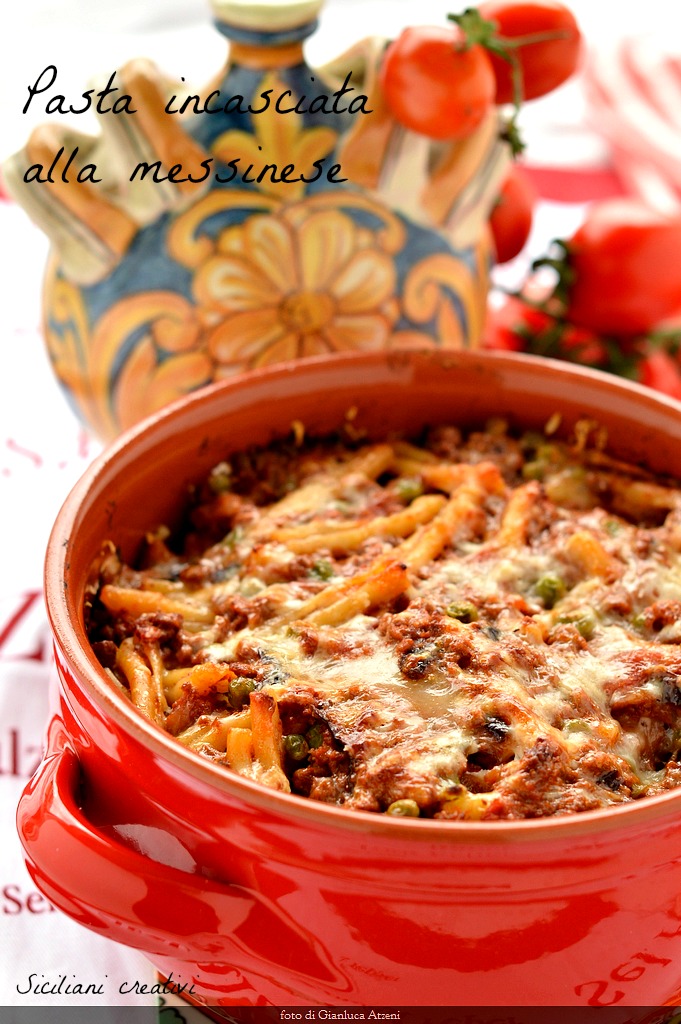 For the pasta 'ncasciata alla Messinese, you must first prepare the meat sauce: Brown the ground beef in a large pan in olive oil, over high heat, until the meat changes color. Add the finely chopped onion and saute for 5 minutes. Combine the meat and onions, tomato paste and mix well, then blend with wine. When the alcohol has evaporated, add the tomato puree. Salt and combine the laurel and basil. Cook covered and over low heat for about an hour and thirty or until the sauce is thick and fragrant.

While the sauce cooks, prepare fried eggplants for pasta 'ncasciata alla Messinese. Wash the eggplants, remove the ends and cut into slices half a centimeter thick. Put the eggplant in a colander, lightly season with salt and leave for at least half an hour, so they lose some water. Dab carefully each slice of eggplant before frying in Water Immersion in peanut oil. I recommend, aubergines must be dry before entering the oil, and the oil must be at a temperature of 160 degrees. Once the aubergines are golden brown on both sides, arrange them on a sheet of absorbent paper.

Dice the salami, sliced ​​the cheese and hard-boiled eggs into wedges. 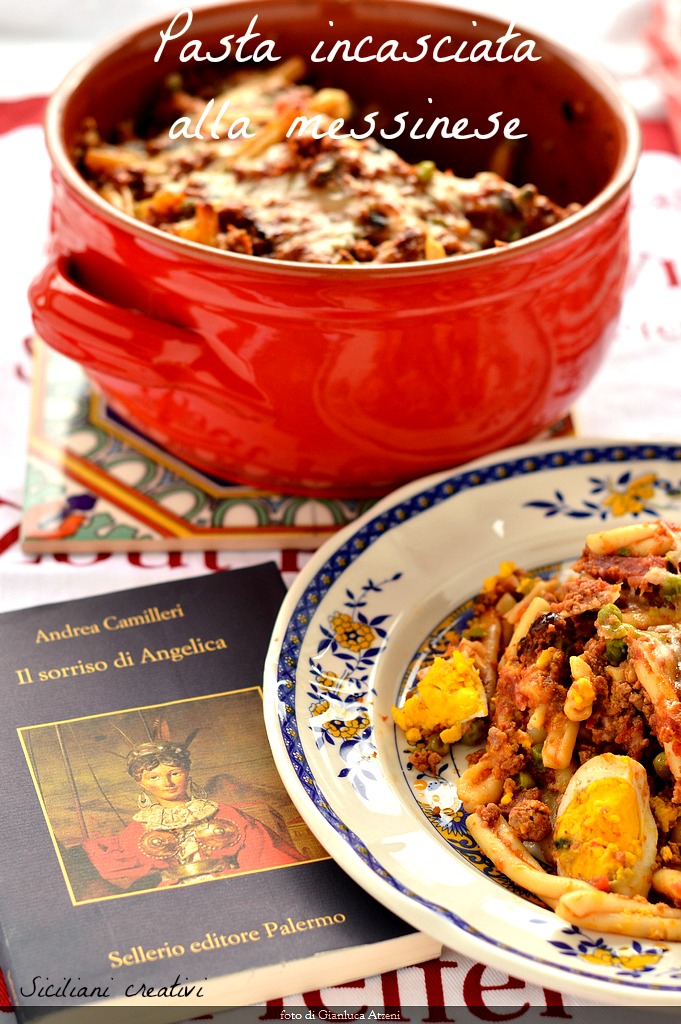 Boil the pasta in plenty of salted water for half the time indicated by the pack. While the pasta is cooking, oil the baking tray or terracotta pan in which you will cook the pasta 'ncasciata alla Messinese, then sprinkle with breadcrumbs.

Once drained pasta, season with the meat sauce, half the grated cheese and half of the chopped eggplant. Pour into pan a first layer of pasta (in earthenware dish in the picture I make three layers of pasta, in a tin can normally make only two), have some salami and caciocavallo, a handful of peas, a little more pecorino cheese, a layer of fried eggplant and some boiled egg slice.

Cover with another layer of dough and repeat the operation. Top with the last layer of pasta and finish with plenty of grated pecorino cheese. Cover up (If you have not used in a clay pot with lid, Cover the pan with a sheet of aluminum foil) and bake for 30 minutes, then remove the cover and use the grill function of the oven to create a superficial crust. Now you are ready to celebrate your Ferragosto with the pasta 'ncasciata alla Messinese. Bon appétit!

Prepare the 'ncasciata paste Ferragosto is one of the few traditions that the people of Messina still feel today. In many prepare it as a dish for the trip out of town. It wraps the still hot pan in two or three cloths from tight linked kitchen and then the paste is eaten outdoors. Also because this dish is very warm.

MATCHING: A succulent and great recipe structure like this pasta incasciata Messinese, It deserves a pairing with a red wine to equal facility. We offer wine Faro Doc, from the company the Casemates, in the Upper Faro fraction, in the municipality of Messina. This red is made from a blend of grapes Nerello Mascalese, Nerello Cappuccio and small percentages of Nocera and Nero d'Avola.

Spaghetti with tuna and onions, olive...

Rolls of semola paste with...

Good morning… basil is inserted into the ingredients but… when using? and the wine indicated and’ rosso (ingredients) or white (recipe text)?
Thank you very much

Hello, thanks to the clarifications, I corrected: Basil, if seasonal, should be inserted into the sauce, otherwise only laurel. The wine is red, as specified in the ingredients, but nothing happens if you use a good structured white. ADA

It seems heavier than the “anelletti al forno” Palermo, but I want to try it. For sure it will be very tasty. Hello, ADA

Hi Ferdinand, it is a bit 'heavier because it also has meat sauce and sausage, but it is very good!!

At Montalbano. I must try it, must be strabuona.
Thanks

Let's say you took it from Messina Montalbano, but the result is the same: heavy and delicious!