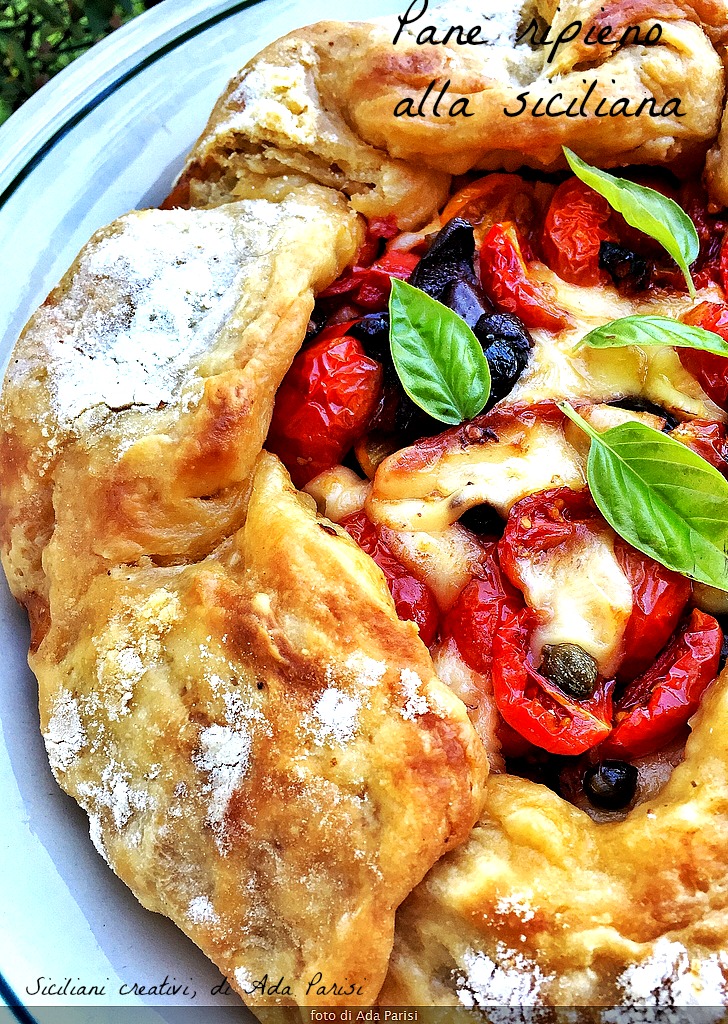 Today I present a stuffed bread sicilian style, stuffed with cherry tomatoes, Basil, olives, Capers, anchovies and caciocavallo. Stuffed breads are typical of the Sicilian tradition and other South Italy traditions. Just think of the pratzida or mustazzeddu in Sardinia (Bread dough made of semolina) or the many stuffed breads that are in Puglia and Calabria (stuffed with vegetables vary according to the season). In the case of the Sardinian pratzida, I know well for having recently enjoyed a Muravera, in Sardegna, the sauce is made only by cherry tomatoes tossed with oil, garlic and Basil. In this recipe, instead, I have enriched breads with ingredients typical of my Sicily: black olives, Capers, oregano, Basil, anchovies and cheese Ragusano Dop. As in all rural traditions, breads and stuffed buns are made with the leftovers of bread dough, that was prepared each week for the following days. The mixtures were not used for bread stuffed with seasonal vegetables, oil, cheese.

Now I know what you're about to ask me: the bread dough is prepared by hand? Yes, if you want to achieve this, you have to make bread. Though, because I do not like to leave you with no alternative, and what do due. The first: you can buy the bread dough from the bakery or supermarket, so skip the first step of the recipe. The second: you can buy a ready bread, eliminate the top, remove the crumb inside, fill with the same ingredients and bake for 20-25 minutes. Honestly, the result will not be the same, but the taste is still very good. In the bottom of the recipe, between the notes, found with the yeast doses of dry or fresh yeast beer, for a faster rise, without the maturation phase in a refrigerator. I recommend, have a look at all my SICILIAN RECIPES and have a good day! 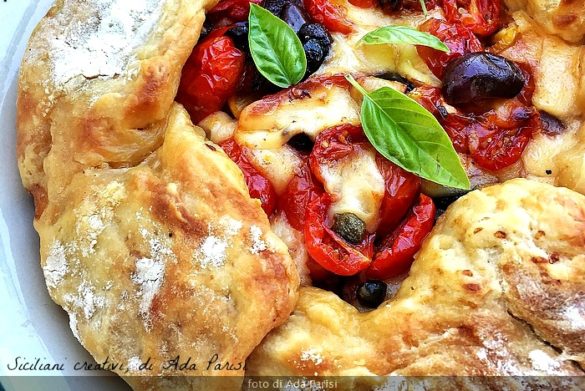 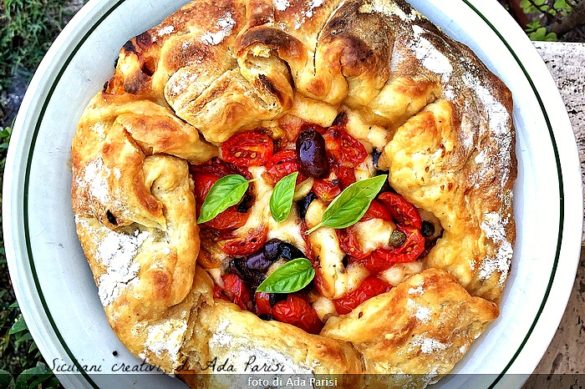 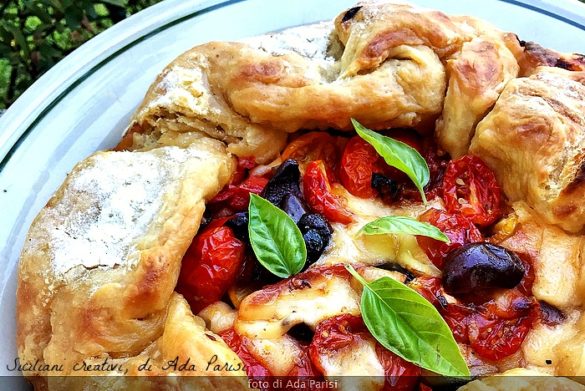 FOR THE STUFFING:
500 grams of tomatoes Pachino PGI and / or datterini
2 cloves of garlic
extra virgin olive oil, to taste
salt and pepper, to taste
a handful of capers
anchovies in oil or salt, to taste
fresh basil, to taste
black olives, to taste
oregano, to taste
150 grams of caciocavallo Ragusano Dop 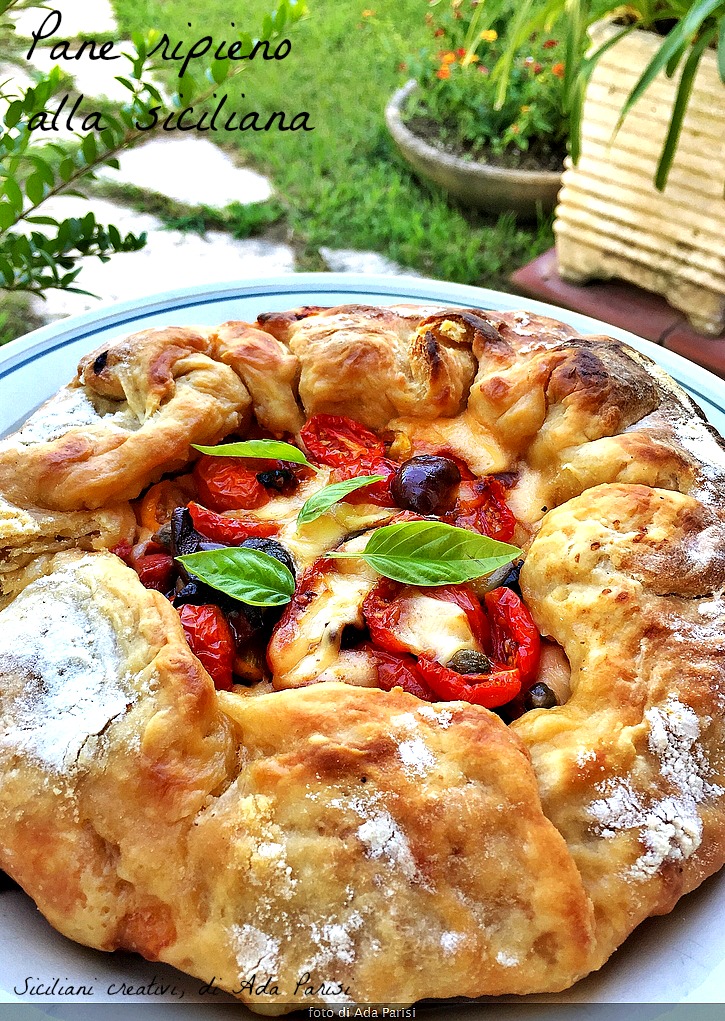 THE BREAD: To prepare the dough for sicilian stuffed bread, you have to put in the mixer 150 milliliters of water and flour. Knead for a few minutes, until the mixture is coarse, and let the dough rest for 30 minutes (autolysis). After 30 minutes, start to knead adding to the mass of the yeast into small pieces. or the dry yeast. Dissolve the salt in the remaining water and add it to the dough, then also add the tablespoon of extra virgin olive oil: work in the planetarium until the dough is homogeneous, smooth and fine wired.

Dall'impastatrice Remove the dough and knead for at least ten minutes hand, then let it rest on the work surface covered with a damp cotton towel for 30 minutes. Lightly grease a bowl and put the dough, cover with food film and store the dough in the refrigerator to ripen for one night. The following day, leave the dough always covered at room temperature and increase to 27-28 degrees constant until doubled. Obviously the rising times depend on the yeast you used, but also from the temperature of the room where the dough is located. Be patient.

DOUGH FAST: if you decided to use a larger quantity of fresh yeast or dry (in the notes at the bottom of the recipe found doses), you can skip the step of maturing in the refrigerator overnight and, after kneaded bread, go immediately to the rise in ambient temperature, which will take place in about 6 hours.

THE FILLING: While the dough rises, Wash the tomatoes, cut them in half and place them in a colander. Add salt and let the tomatoes in the colander for at least 2 hours, mixing them occasionally. Like this, tomatoes will lose most of the vegetation water and, Like this, the bread will not become damp while cooking. Place the tomatoes in a bowl and season with plenty of extra virgin olive oil, Basil, minced garlic and salt (sample to verify the flavor) and let it flavor in the refrigerator for an hour. Then add the olives, Capers, a little more basil, oregano, the chopped anchovies and cheese cut into cubes .

When the bread has completed its rise, grease a round baking tray and sprinkle it with a little reground semolla. Spread the bread on work surface to form a large circle twice the pan, because you will fold the edges over themselves. Place the dough in the cake bowl. Fill the pan with seasoned tomatoes: mettetene in abundance, because cooking the tomatoes will dry out and lose volume. Now you just have to fold the flaps on the surface of bread, making sure that it remains a central hole discovered. Pull gently and the bread of the folds formed on the surface of ordered seasoned bread. Sprinkle the tomatoes remained visible with a little extra virgin olive oil.

Cover the pan with plastic wrap, Leave to rise for about an hour or until you see that the dough for the bread will have leavened, becoming bloated. Sprinkle the edges of the dough with a little reground semous.

Preheat oven to 200 degrees static and bake for 45 minutes or until the surface of the filling bread is browned. You can enjoy the warm bread stuffing siciiana, with melted cheese, warm or cold. And the next day is even better. Bon appétit!

As you can see, the dose of yeast dry beer that you do is minimal: if you want a faster rise, you can increase (at the expense of digestibility) the dose in one sachet. Similarly, you can also use a fresh yeast in minimum dose (4 grams) or at higher dose, a maximum of 15 grams, if you want a faster rise. Increasing the dose of yeast to speed rising, obviously you need to skip the step of maturation in the refrigerator and move to a direct leavening at room temperature.
I always use very small doses of yeast (and rarely, because normally I use the yeast) and I'd rather have a maturity of one night in the refrigerator and to follow complete the bread to rise at room temperature.

The recipe for Sicilian cunzato bread

Bread with cheese and cranberries

Hi Ada, always using the same dough for bread I can change the filling and use, for example, blanched vegetables?

Hello Giusy, you can change the filling but the vegetables do not blanch them, they fill with water and make the bread chewy. Salt them in pans with extra virgin olive oil for a few minutes so that they remain crispy, much then they will cook again in the oven. Let me know

Hi I was wondering if I could add aubergine to this recipe and if so how would I do so?
Thank you!
Looking forward to trying this out!

Hi, welcome! Sure, you can add aubergine. If I were you, I would fry aubergine and than add in the stuff. Let me know! ADA

Wonderful! Thank you!!!
Also is there a different cheese I could use because I can’t find caciocavallo locally here in France
Thanks again!

Hallo, you can use any semi aged cheese as scamorza, provolone, provolone. Not mozzarella because it is too watery. Let me know.

Hi Ada!!!
What amazing recipe! I love bread stuffing mix and this is a triumph of Mediterranean, d’estate, the unmistakable aromas! I know that soon will prepare and let you know! Although I have not the slightest doubt about his goodness!
Question: bread with the flour I really like, but if you decide for a variant, I could use a 1 stone-ground flour?
See you soon! A hug ;-)
Antonella

Hello Antonella, thank you. Of course, you can use the flour you prefer! Best wishes and look news, ADA