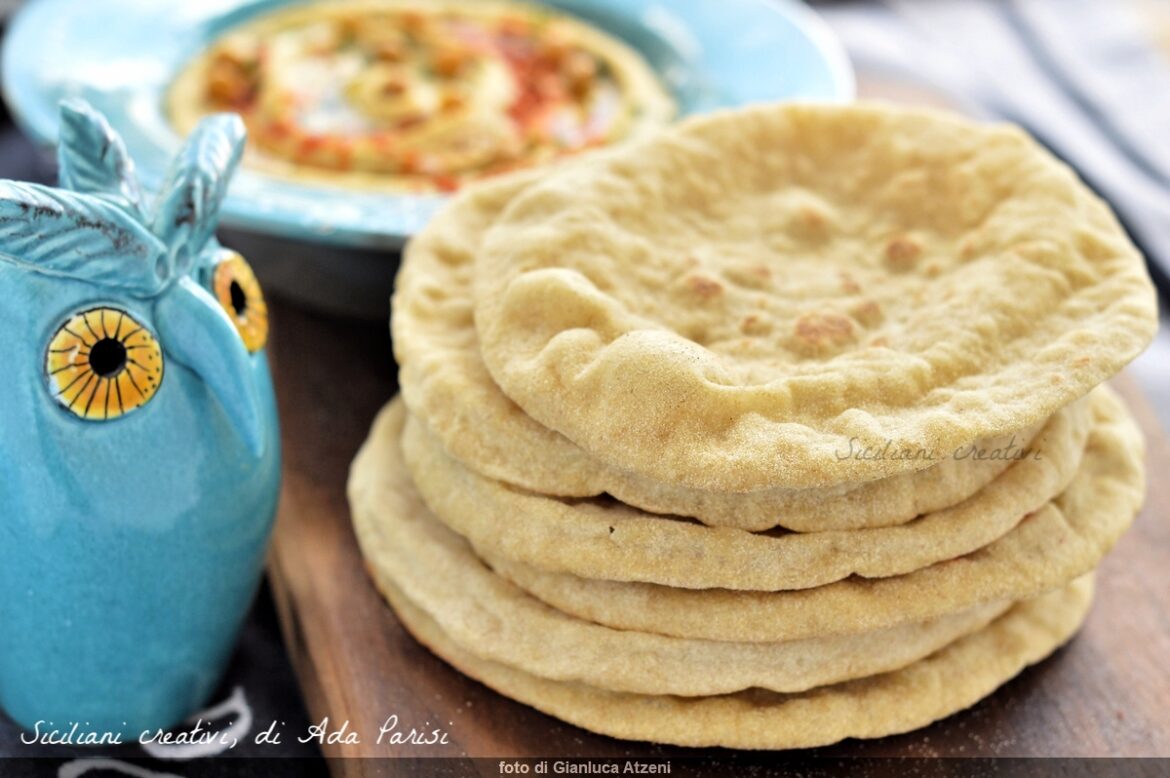 But as time passes and I delve into the yeasts I enjoy getting out of the national borders: today I leave you the recipe of pita bread or Arabic bread. A traditional Middle Eastern bread, common in forms more or less similar to the entire Mediterranean basin: Greece, Lebanon, Turkey and beyond. It's a round sourdough bread, pretty flat, but with the peculiarity of being virtually empty inside, so that it can be stuffed easily.

The structure of pita bread or Arabic bread

As you can see in this very short VIDEO TUTORIAL that I posted on my profile Pinterest, bread when baking, that raw has the shape of a small flatbread, Swollen. Bubbles are created on the surface, the top and bottom part and the bread takes the form of a balloon. When cold, pita bread or Arabic bread deflates. But the two parts remain separate and you just have to separate them to get a pocket to stuff as you prefer. Is’ the classic bread that accompanies sauce like l’CHICKPEA AND TAHINI HUMMUS, the sesame cream. Or the yogurt and cucumber-based tzatzichi sauce or the baba ganush (the AUBERGINE CREAM AND YOGURT). Not to mention falafel or kebab.

Now, the process is very simple and you see it in the step you find in the post. Just respect the leavening times. As always, with doses of sourdough, or fresh or dry beer that I leave you, you can make a ripening of the dough in the refrigerator, dividing the work into two days. Or make a leavening in the day by skipping the rest in the refrigerator. I used 100 grams of monocoque spe fare flour and 400 grams of flour 0, but you can also use only flour 0 or type 1.

Cooking, in the oven or in a pan

I would like to spend a few words on baking pita bread or Arabic bread. Traditional cooking is in a wood-proof oven, and one minute is enough. But since not all of us have a wood-baking oven (me included), baking at home should take place at the maximum temperature (my 270 degrees), better if on refractory stone. However, I have experienced pan cooking, or rather in a lava stone plate, and I think it's the best solution. Accumulated heat causes pita to inflate in minutes. You just have to be careful to cover the pan so that the heat develops as evenly as possible.

At this point, you just need to have a look at all my BREAD AND YEAST RECIPES, including the timeless BRAN BREAD BAKED IN POT (for which you'll need a cast-iron pot, that I suggest I buy because it's really useful). And I wish you good day. 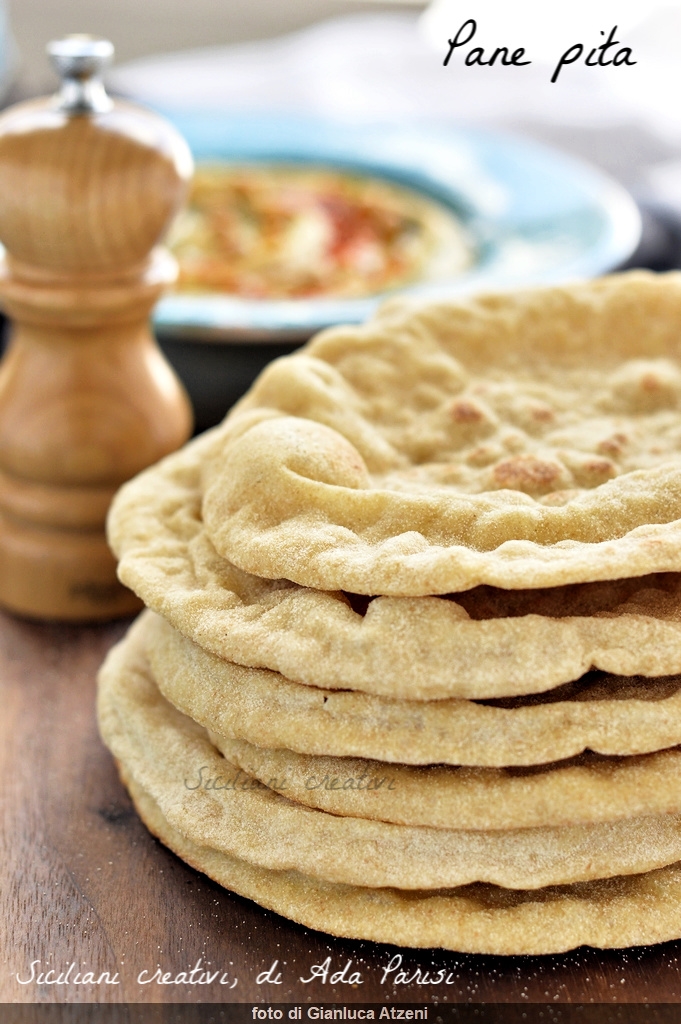 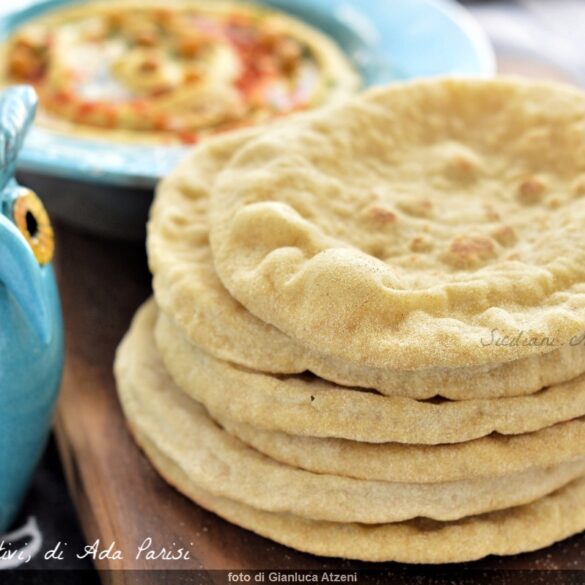 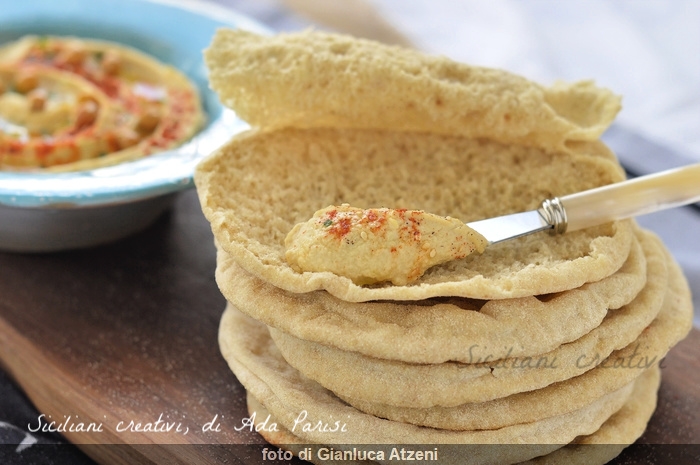 Pita bread or Arabic bread is very easy to prepare. For the dough WITH SOURDOUGH, put in a bowl the flour, add the sourdough to small pieces and the water. Knead, by hand or better with a knear or planetary, until the water has been absorbed and the dough begins to become homogeneous. Add salt first, kneading until absorbed, and then the oil. Once you get a homogeneous dough, transfer it to the worktop and knead by hand for 5 minutes vigorously, until the dough is smooth and elastic.

For the dough with FRESH BREWER'S YEAST it is enough to follow the same process but first dissolve the fresh brewer's yeast in a little water at 26 degrees (and here we go back to the kitchen thermometer that I've told you so many times to buy).

The dough with DRY BREWER'S YEAST is the simplest, because it is enough to add the brewer's yeast in granules to the flour and then proceed by joining the water and gradually as I described above.

Once you have made the dough, you can decide whether to cover it with food film and store it in the fridge overnight, so that the dough matures, or whether to leave in the day. In the first case, once you have completed rest in the refrigerator, pita bread should be brought back to room temperature and then it must rise until doubling. If you haven't put it in the fridge, just cover it with food film and wait for it to double.

When the dough has doubled, divide it into balls weighing 80-100 grams maximum. Round them up (pirlandole as for brioche or panettone) and cover with food film. The dough must double again, but it's going to take a little time.

When the dough balls will be doubled in volume, spread them with your fingertips on the worktop lightly sprinkled with semoless or flour. You have to get a flat disc, thin but not too (about half a centimeter). Cover the dough discs and leave to rise for 15-20 minutes.

For cooking, you can choose between the static oven at the highest temperature or (recommended) a cast-iron or lava stone plate. In this case, preheat the plate (better if with sheddingflamma on the stove) and, once hot, put on the pita bread and cover with a lid, so that the heat spreads evenly. When you see small bubbles forming on the surface, turn the pita and cook it for a few seconds on the other side. Then, turn it over again and let it cook over low heat and always covered: as you see in the VIDEO TUTORIAL, the surface of the pita will swell and the bread will look like a balloon. All cooking should last very little, 3-4 minutes maximum. Once cooked, put the pita on a wire rack. When you cook the other pite, stack them on the previous ones: this way the heat will keep the Arabic bread moist. Pite should be eaten fresh, because just made are very soft and yielding and you can open in half and stuff or even roll.

You can store the pite for one or two days locked in a frost bag while they are still hot, or freeze them already cooked and, once defrosted in the refrigerator, heat them in the oven to 100 degrees.

Crackers with oregano and Maldon salt (with...

Good evening Ada, half a millimeter ? it's not a little bit’ too thin ? It won't be half an inch ?

A hug and thank you for all your beautiful and good recipes.

Certainly, half an inch! thank you very much for reporting. A warm greeting, ADA