At the Beer Bread 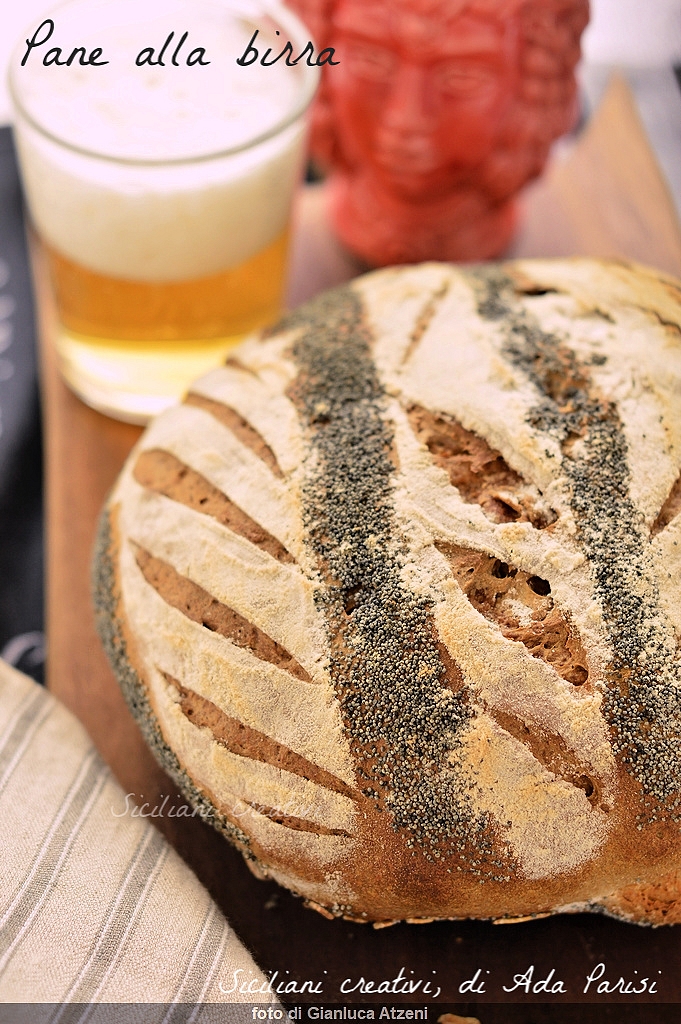 Have you ever tried beer bread? Is’ fluffy and long-lasting, thanks to the presence of a small percentage of alcohol. Is, depending on the type of beer you'll use, will have a scent and also a taste of malt and hops more or less intense. I used a wheat-rimacinata semola from perciasacchi type 1 and an Indian Pale Ale beer (Ipa), hops, with a bitter Ibu ratio between 40 and 50, that is, strong and alcohol grade 7. Another beer I recommend you try if you love more decisive tastes is the Stout. The dark beer will give your bread a very pronounced malted and toasted feature. Is’ a tasty and simple alternative to SEMOLA BREAD or the many BREAD AND YEAST RECIPES you find on the site.

Beer, used instead of water, makes the bread very soft and gives it an unmistakable scent, which varies depending on the type of beer you'll use. Given the taste, I suggest you use beer bread to accompany cured meats and cheeses. Or stews or meat stews, maybe prepare using beer, as the BEER CHICKEN or the PORK TENDERLOIN WITH BEER AND CHESTNUT. I used a Sicilian type 1 semola, because the characteristic of this bread is being very rustic. If you prefer, you can also use a flour type 1-2 or part whole.

As always, I used sourdough, but you can also use both fresh and dry brewer's yeast. The minimum doses of yeast allowed me to ripen in the refrigerator and a long rise at room temperature. But you can skip the ripening phase in the fridge and make a rise in the day straight at room temperature, using these doses or, to speed it up, slightly increasing them.

I said “slightly”: don't please put 25 grams of fresh beer yeast for 500 grams of flour. 5 grams is enough if you make the dough in the morning and want to eat your beer bread for dinner. On the surface I put poppy seeds, that go well with the aroma of beer. And I rested the bread on a layer of oat flakes, that give a sweet taste and a little’ crispy.

You can bake this bread in a cast-iron pot, pan or on refractory stone. Ready for dough? Have a good day. 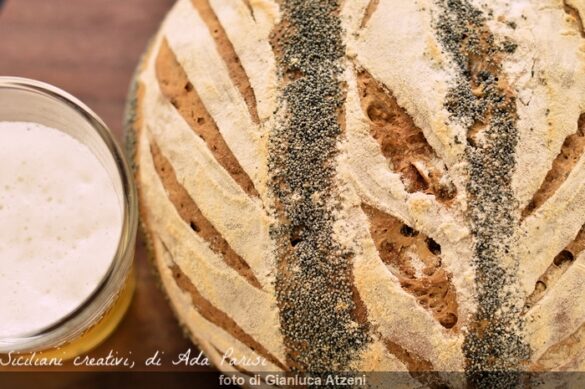 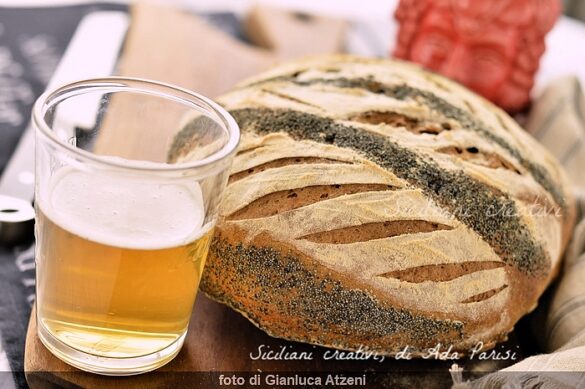 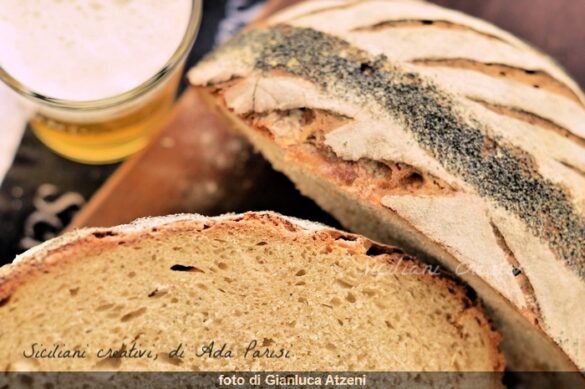 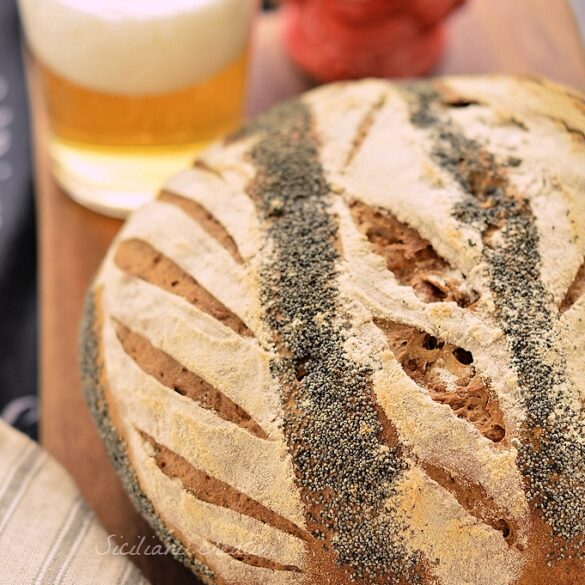 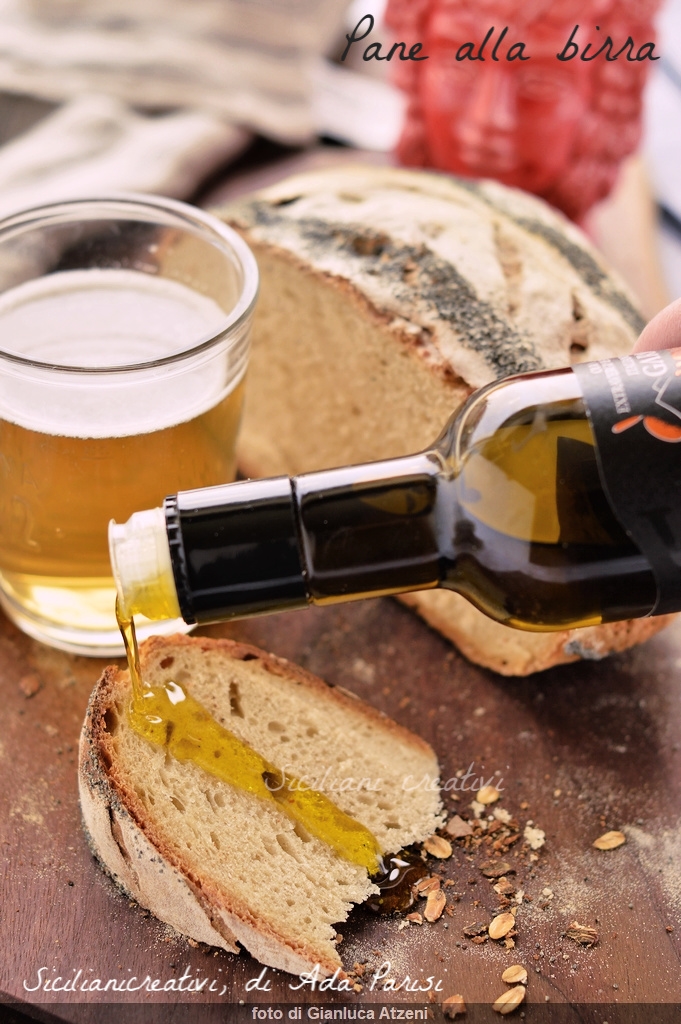 You can prepare the dough for beer bread both in the planetary both by hand (using a little oil on your elbow). I personally prefer the planetarium, especially for very hydrated doughs. Now, I advise you to put in planetary the sifted flours (without throwing away the integral parts, put them in the bowl), operate the planetarium at low speed and slowly add 300 millilitres beer at room temperature. Once you get a coarse dough, let it rest covered with film in the bowl for 2 hours. It is the so-called "autolysis", that is, a period in which water and flour interact and enzymes begin to break down starch molecules and protect them, facilitating gluten formation. It is a suggested method especially for doughs that contain sourdough. The advantage will be a particularly elastic and workable dough.

Once the two hours have passed, add to the dough the salt dissolved in the remaining 25 milliliters of beer. Knead until the liquid is absorbed, then add the oil and, once the oil is absorbed, combine the SOUR IN small pieces or the SECCO BIRRA LIEVITO. Knead the dough with the hook for at least 15 minutes.

If you use FRESH BIRRA LIEVITO, you have to melt it in the beer and in this case you have to set aside not only the 25 millilitres of beer for salt, but another 50 to dissolve the fresh brewer's yeast. Which will be added to the dough after autolysis and after putting salt and oil.

When you have obtained in the planetary a homogeneous and smooth dough. put it on the worktop and work it out for a few minutes by hand. If you want to ripen in the refrigerator, put the bread in a bowl covered with contact food film and leave it in the refrigerator for 12-24 hours.

Once the bread is returned to room temperature, make folds at regular intervals: stretch the dough and fold it on itself so as to incorporate air three times. After the last fold, form the bread by giving it its final shape and putting it in the pan, covered with parched paper and sprinkled with flour, semola and oat flakes. Preheat the oven to 230 degrees, when the bread will be yeasted and swollen, sprinkle it with a little flour. You can decorate it and make small cuts, If you want, but it's not important for its development. Cook for 15 minutes at 230 degrees, then lower the temperature to 190 degrees for 30 minutes and, Finally, at 175 degrees leaving the oven door slightly ajar. Remove from the oven, put it on a wire rack and let it cool. Bon appétit!