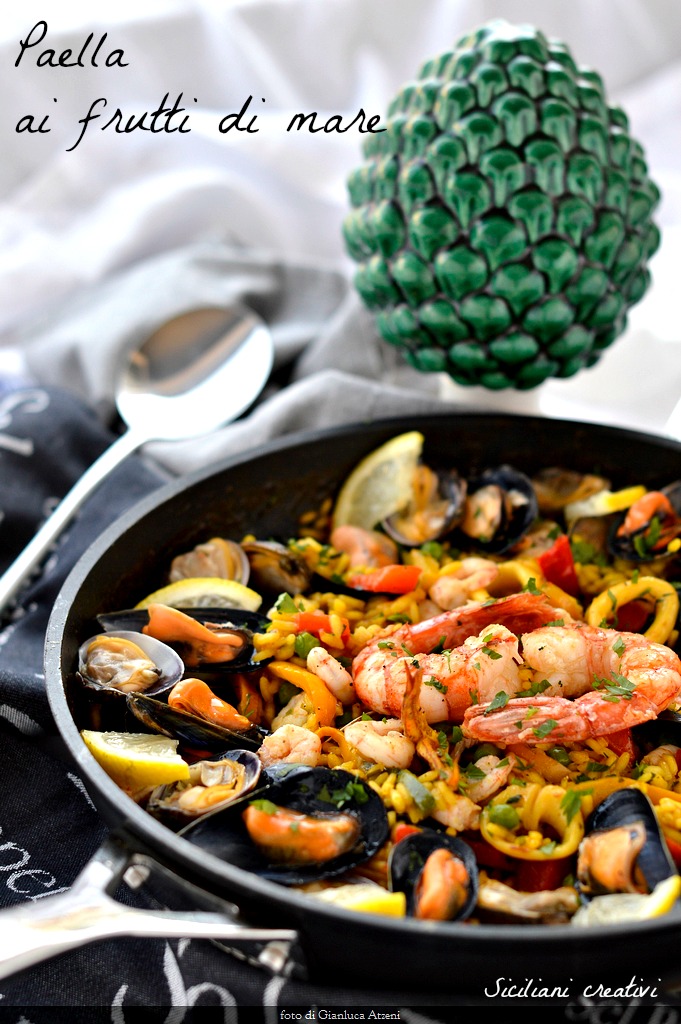 Today I bring to Spain, to prepare together “seafood paella”, or the paella with seafood. Purists call this Valencian dish “seafood rice”, because for them the paella is the traditional one, but in all of Spain it is recognized variant of paella with seafood. It is a wonderful dish, that takes some’ work but will leave everyone speechless. Alternatively, I suggest you try the RESOTTO TO PESCATORA or, if you want a particular dish, the Fregula SARDA SEAFOOD.

The original recipe of paella with seafood

The key ingredient is the fresh shrimp, absolutely necessary to prepare the balloon in which to cook the paella, and of course seafood, mussels and clams. Traditionally they also put the squid, but nothing prevents to add some rock fish to make more intense sauce, or shrimp or crabs. As plant, inevitable peppers and peas, but in the season you can also add snow peas or green beans.

The recipe that I present is the fruit of a long examination of recipes and videos in Spanish, to seek the closest possible to the original version, because honestly I think that the recipes in the Italian version jump numerous steps than Spanish ones. Prepare the paella with seafood is a job a little’ long, I will not lie to you: you have to clean the fish (and you have to do because you need the waste), open shellfish, making comics, cut vegetables, fry everything separately and then cook the rice, it must be cooked in the comics along with vegetables and squid.

Is’ important not to mix the rice in the last stages of cooking, so that the edges and on the bottom is formed the lightly browned crust of which every Spanish purport at least one piece in the plate: in Spain using the “paella”, a large saucepan and deep iron, Perfect to create this crust. In the absence, used a large pan, preferably non-stick. What else to say? Do not skimp on saffron, the paella must be yellow gold, and enjoy a garnish as Favorite, without forgetting the lemon slices. And now get to work, Have a nice day! 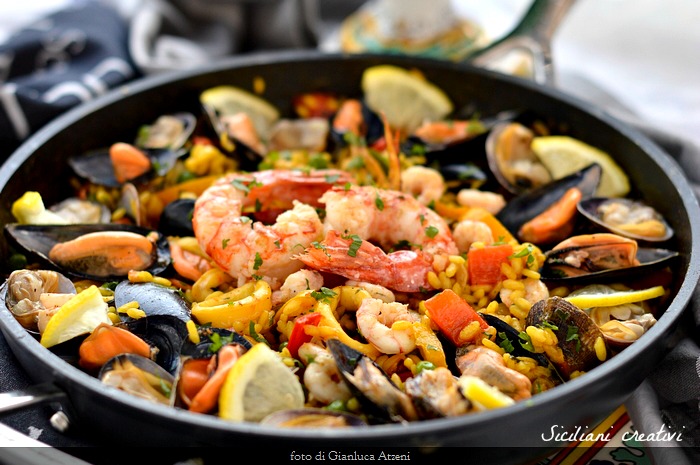 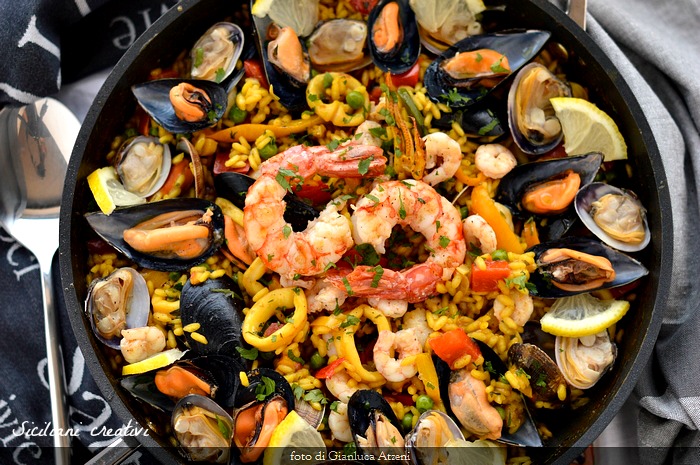 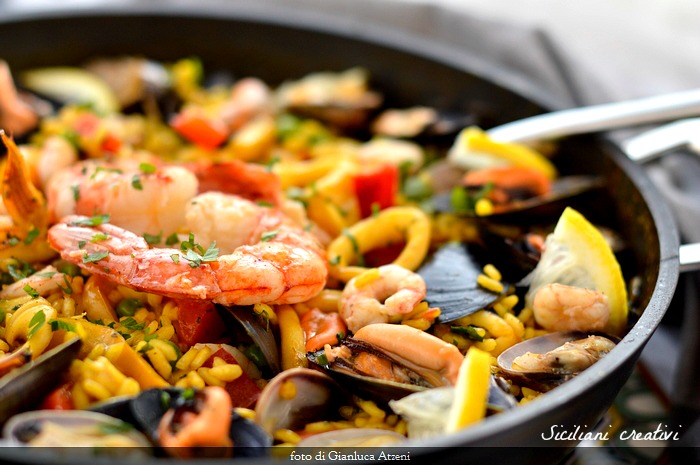 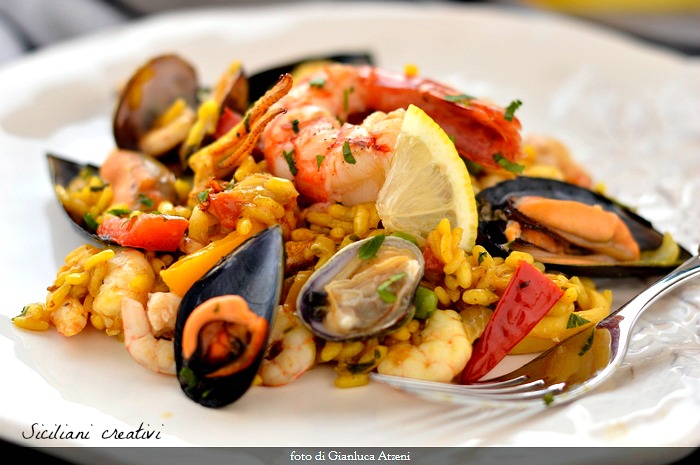 350 grams of rice Carnaroli
3 squid already cleaned
500 grams of pink shrimps (uncleaned)
4 prawns (uncleaned)
600 grams of clams (already purged)
800 grams of mussels
1 onion
1 red bell pepper
2 cloves of garlic
1 tomato
200 grams of boiled peas
a teaspoon of paprika
3 sachets of saffron or the equivalent in pistils
extra virgin olive oil, to taste
salt and pepper, to taste
fresh parsley, to taste
an organic Lemon
FOR CARTOON SEAFOOD
the heads and the shells of shrimps and prawns
a small carrot
a stalk of celery
a piece of onion
a few stalks of parsley
a bay leaf
a pinch of salt
100 ml of white wine
2-3 cherry tomatoes or datterini
extra virgin olive oil, to taste 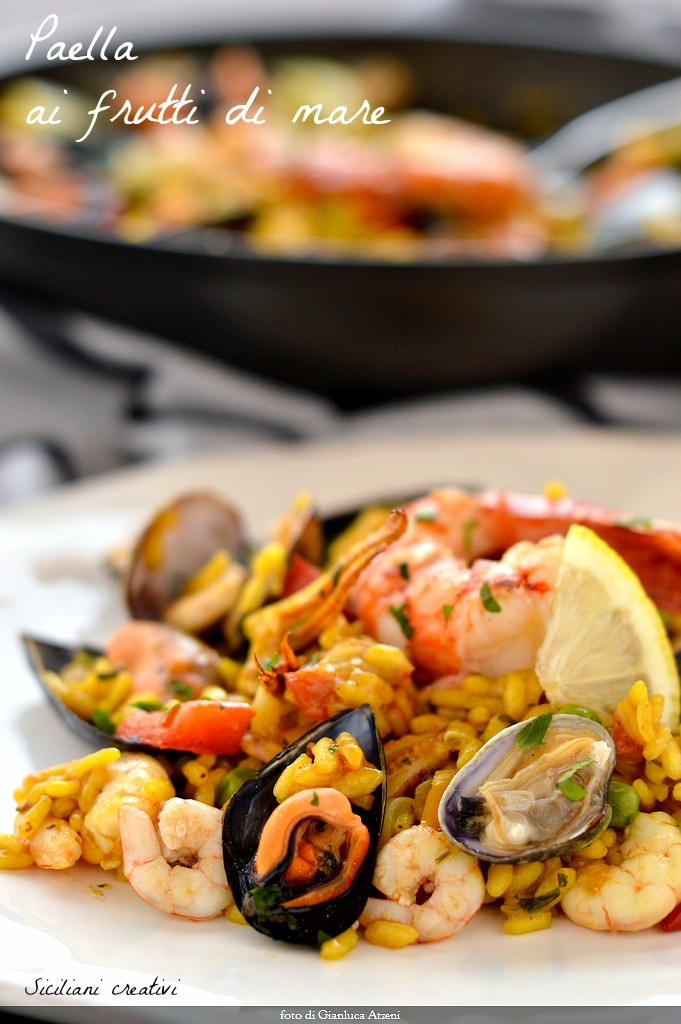 The preparation of the paella de mariscos (paella of seafood) it's a little long, but I assure you it's worth it. It all starts with cleaning the fish and preparing cartoon shrimp.

CLEAN THE FISH. Clean the shrimps by removing the heads and the shell that surrounds the crustaceans. Set aside the heads and shells. Also eliminate the dark thread of the intestine inside the shrimp: I use a toothpick to pull it out and then gently with your fingers extension. Cover the shrimp with plastic wrap and refrigerate. Wash the squid, then cut the body into washers and divide the code into two or three pieces. Cover the shrimp with plastic wrap and refrigerate. Wash clams already purged under running water. Wash the mussels and clean them by wiping the shells with a retina and stripping away the fine.

OPEN MUSSELS AND CLAMS. Place in a pan a little oil, a clove of garlic and a few stalks of parsley, heat and add the clams. Cover and cook over high heat until the clams are open. As soon as the clams open, immediately remove them from the pan. Strain the cooking water of the clams and set aside. Do the same with mussels, filter the cooking water and join it with that of the clams. Remove half the clams and mussels from the shells and leave the rest untouched (PHOTO 3). Cover all seafood with film for food in contact and refrigerate.

FOR SHRIMP BISQUE (CARTOON). Peel the carrot, Clean the onion and celery, then cut the vegetables into pieces. Put carrot, celery, Onion, some stem of parsley and tomatoes in a pan with a drizzle of extra virgin olive oil and saute over medium heat for a few minutes. Add heads and the shells of shrimp and, over high heat, Brown crushing the heads in order to bring out the mood of the crustaceans. Brown the shellfish and vegetables over high heat for 5 minutes or until they have changed color. Add the white wine to blend and the bay. Let evaporate the alcohol of the wine, then join the remains of shrimp and hot vegetables (PHOTO 1) to cover scraps of fish (consider about a liter of water). Bake for 30 minutes covered, then filter the sauce obtained in a colander meshed, fine crushing waste of shrimp and vegetables (PHOTO 2). Add to the prawn balloon the water from mussels and clams that you have previously filtered and set aside.

VEGETABLES. Clean the peppers by eliminating the whitish ends and filaments inside. Cut the peppers into regular pieces (I cut into squares red and yellow strips). Thinly slice the onion. Finely chop the parsley. 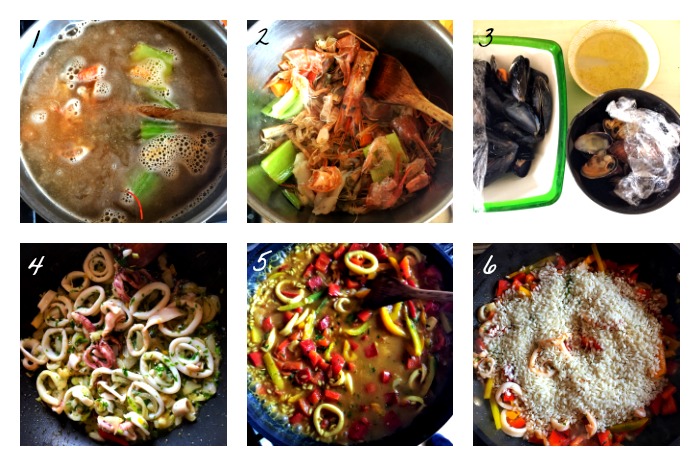 COOKING. Pour into a deep pan (As you find more similar to typical Spanish paella) a little extra virgin olive oil. Heat and add the shrimp and prawns. Blanch them for few seconds over high heat, on one side and the other so that they change color while remaining juicy. Set them aside. Add in the same pan abundant olive oil. Put two lightly crushed cloves of garlic in the pan and the onion and brown over low heat until the onion is slightly withered and the garlic golden. Remove garlic. Add the squid and saute over high heat for 2-3 minutes (PHOTO 4), then also connect the red and yellow peppers. Sauté the vegetables and squid for 4-5 minutes on high heat, adding some paprika and salt and, If necessary, a little fish comic. Consider that much of the flavor of paella is given by the caramelization of sugars in vegetables and fish, then the early stages of the paella with seafood cooking must be done at high heat, and without too much liquid.

Add the vegetables and squid rice (PHOTOS 6) and mix. Pour over rice the fish stock in which you have dissolved saffron and mix well (PHOTO 5) , then add 3-4 ladles of fish stock. Bring the rice to cook, often tasting for salt and check the cooking point. The paella provides a rice al dente and not creamed (therefore different from the risotto). If you really need, add even comic until desired doneness. Remember, in the latter stages of cooking, not to mix the rice and turn up the heat slightly, so as to form a slight crust on the edges of toasted rice, essential if you want to prepare a true paella with seafood. When cooked, add chopped parsley, mussels and clams that have taken away from the shell and pink shrimp. Mix everything.

Traditionally, paella of seafood is served at the table in the pan in which it was cooked. Decorate the surface of the arroz de mariscos with mussels and clams with the shell you've kept aside, add the red prawns and finish with a drizzle of extra virgin olive oil and some lemon slice. Enjoy the paella de mariscos immediately and enjoy your meal!

MATCHING: Rosé Champagne Boizel, obtained from a blend of Chardonnay grapes, Pinot Noir and Pinot Meunier. This historic house sparkling wine, whose underground cellars in Epernay are Unesco heritage, this produces Champagne with fruity scents (Strawberry), with a slightly spicy taste and a fine and elegant perlage. An ideal wine for the complex flavors of the paella de mariscos, especially in conjunction with Cartoon taste of shrimp, always in evidence across the plate.

Spaghetti with clams, courgette and bottarga

I was always afraid that compliments that made me after eating my paella were exaggerated, but the procedure described by you is exactly what follow, including vegetables and bisque. Now I'm a little’ more relaxed. Thanks, ADA. It is very good. Ferdinand

See? Good things are being recognized. And you're good at what is clearly established. A dear greeting, ADA

I really like the pealla., your recipe then it's fantastic.
Thanks
A big kiss