Paccheri pasta with tuna in tomato sauce and Mint 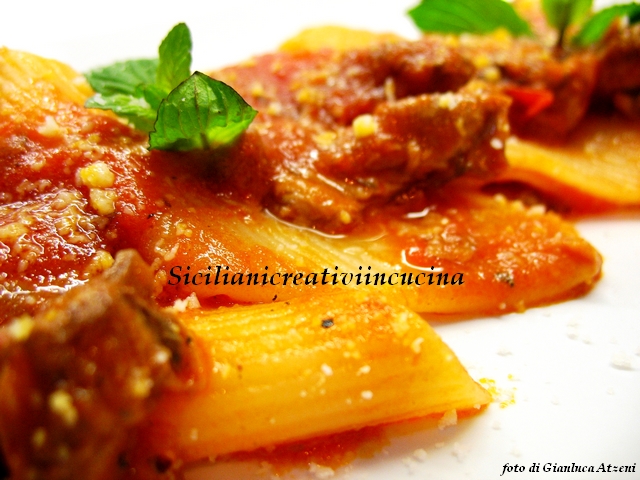 Tuna in tomato sauce, with the unmistakable scent of mint and garlic. Is’ a dish I prepared my grandmother, then passed down to my mother and now I ' step’ to you. The sauce is excellent with pasta. And I used it to flavor pasta rigati, but don't forget the tuna, You can see a picture at the bottom of this post: You'll love. Among other things, in times of crisis (of time and money), It's not cheap to do both the first and the second course with one preparation. The tuna's little Tunny’ (scientific name: Euthynnus alletteratus), among other things, is an eco-sustainable seafood, very versatile, tuna meat similar to those (but many smaller) and the cost really content: If you find it in pescheria absolutely don't let him get away.

Wash the tuna and cut it into 4 regular slices, excluding the parts closest to the tail and head, but don't just throw them away. Use a knife to make a hole in each slice is put’ inside a clove of garlic and a sprig of mint. Cover the bottom of a pan with olive oil and fry the slices of tuna, his head and his tail, on both sides. When they are golden on each side, set them aside. Remove the pan with the oil from the heat and allow it to cool.

Meanwhile, Finely chop a clove of garlic; merge it with oil, fry over low heat and add the tomato puree. Season with salt and pepper, and add mint leaves to taste. Cook for 10 minutes and, When the sauce has a little’ restricted, lay the tuna steaks in a pan, the head and tail. Cover the Pan and cook for 15-20 minutes, then – If the sauce will not be dense enough – uncover the Pan, turn up the heat and thicken for 5 minutes.

Set aside 4 slices with a little’ the cooking sauce, clean the head and tail, obtaining as much flesh as possible, and pour in sauce with which will be season pasta. Boil the pasta with salted water, drain and pour into the Pan, mantecandoli for one minute with the tuna sauce. Serve the pasta with the sauce and a sprinkle of grated pecorino cheese (the grandmother was this and I assure you that the pecorino is everything, but you may not put it) and garnish with sprigs of mint.

THE PAIRING: Despite this being a seafood dish we recommend a red wine, but to drink fresh: a Tuscan Docg Chianti Rùfina company Villa Travignoli, good structure, scented, soft and decidedly drinkable and paccheri with this tuna in red.

Swordfish in a Bain Marie Messina

Hello, I invite you to participate in my column this month's improvised: http://lamiacucinaimprovvisata.blogspot.it/2013/08/il-vincitore-di-luglio-e-la-mia-cucina.html, If you want of course… Kisses and see you soon, Martina

Hello Martina, are fully operational in mid-September. Maybe I can take part in the forthcoming…. Hi Ada

Your recipes are always so beautiful and inviting! Vist
Bye
Maurizia

Hi Maurizia. Thanks. As soon as you can, try this recipe and let me know. See you soon, ADA