Sicilian pickled olives, with the warning that they're addictive and you can't do without it anymore. The period is perfect: in October those lucky enough to have some olive tree reaps its fruits, but often (at least in the South) olives are also found in greengrocers and supermarkets. Of course you have to make sure that these are fresh fruits, healthy and organic. If you have already tried SICILIAN Olive SCHIACCIATE, a much faster but definitely delicious recipe, you absolutely have to prepare even the pickled ones, a simple preserve that will accompany you throughout the year.

The olive tree is a plant of ancient origins and his fruit, the olives, accompanied man and his feeding for centuries. And if it's true that extra virgin olive oil is one of the healthiest products, flagship of all the countries bordering the Mediterranean, olives don't exist just to be frant and give life to the oil, but also to be used in other preparations. 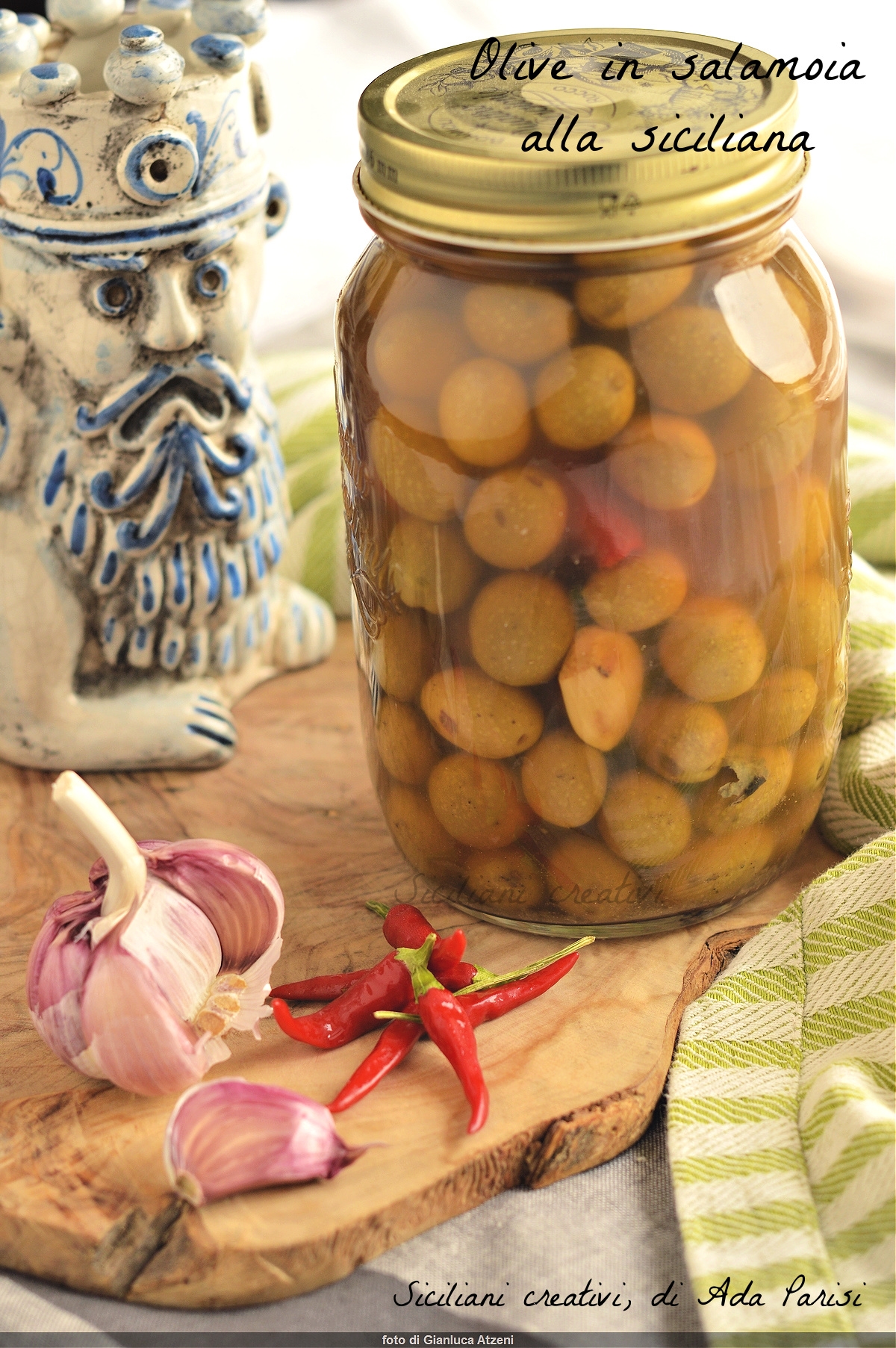 Pickled olives are a preparation that unites all regions of the South Central. With small variations from one to the other in the amount of salt, in the time of conservation and the use of spices and herbs to flavor them. Sicily and Calabria have very similar traditions: garlic, chilli and wild fennel are essential. Some add a few bay leaves or a lemon zest, which has the sole purpose of keeping the olives clearer. In Puglia and Sardinia they are more Spartan: the main aroma is that of wild fennel. In Campania they prefer laurel.

Some put olives in water for a few days (7-14 days) before you pick a picker, in order to make them sweeter and shorten storage times. We've never done that in the family, and neither does my father-in-law, who is Sardinian: if the brine is well made and give the olives the right time to rest, they won't love. On the other hand, I remind you that bitter and spicy are two of the hallmarks of a quality extra virgin olive oil and, then, the same note in the olives is a quality index.

Do not try to taste the pickled olives before 5-6 months: these olives have the value of storing themselves for a very long time, even years. Then, if you will prepare them year after year, like I do, you'll always have your pickled olives ready to be used.

How to use pickled olives

The most common use of pickled olives is as an aperitif snack (the classic Spritz chips and olives tells you something?), in Sardegna, Puglia, Calabria and Sicily there is no lunch that does not have among the appetizers its bowl of pickled olives or seasoned with oil. In the kitchen , Sicily but not only, pickled olives are used in a lot of recipes. Unmissable in the EGGPLANT CAPONATA, in GOOTTA FISH SAUCE (Here the VIDEO RECIPE with the swordfish), in the simple FISH IN A PAN WITH OLIVE TOMATOES AND CAPERS, in rice salads and so on. In short, opportunities to consume them will not be missed. Have a good day! 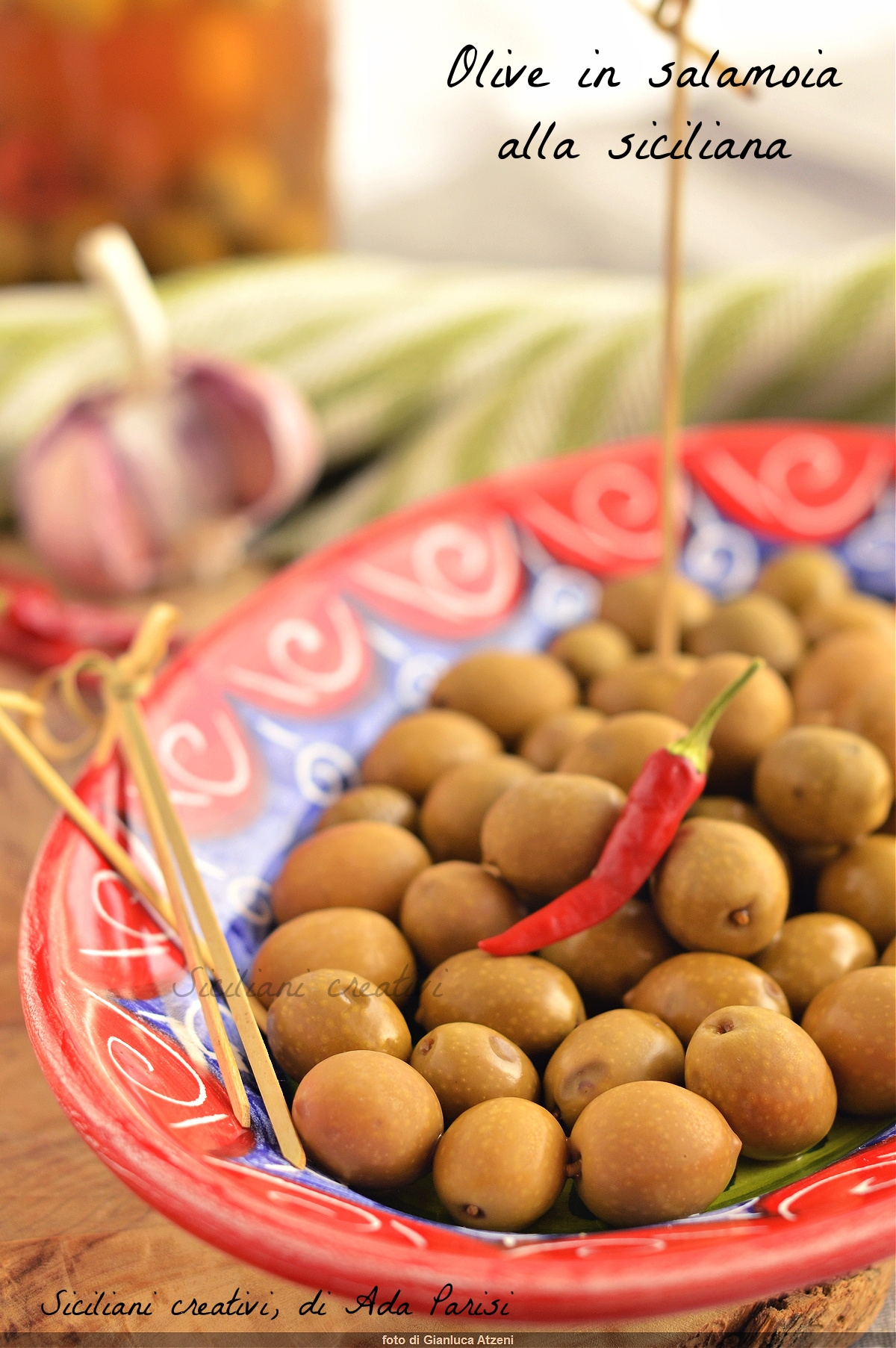 2 kilograms of freshly harvested olives
2 water
90 grams of salt per litre of water
garlic, to taste
Chili, to taste
Wild fennel, to taste
a few pieces of lemon zest

Sicilian pickled olives are easy to prepare. After washing the olives and eliminating those not perfectly intact, you simply have to put the water and salt in a pot , add a small piece of lemon zest and bring to the boil. This will melt the salt perfectly. Let the water and salt solution cool completely before using it.

As the brine cools, sterilized the jars: boil them, along with the lids, in a large pot for 30 minutes. Then, put them on a clean cloth to dry.

Place a few olives in each jar, add one or two cloves of garlic with the peel and a couple of chillies (Calabrian pickled olives, very similar to the Sicilian ones, abounds with chilli). Complete with the rest of the olives. The olives must reach almost the edge of the jar. If you want, you can also add a few bay leaves or a piece of lemon zest to taste.

At this point, take the sprigs of wild fennel and braave them making a kind of disc the same size as the jar in which you will store the olives. Place the wild fennel crown in the jar to cover the olives, pressing down firmly. Then, pour the brine of water and salt on the olives until completely covered. It is important that the wild fennel disc keeps the olives well immersed in brine. Close hermetically and store the Sicilian pickled olives in a dark place, cool and dry.

At this point the only ingredient you need is time: the olives will be ready in about 5-6 months: during this time, they will lose the bitter note while keeping the vegetable one. Pickled olives are preserved for a long time, even a year, so don't worry if you've prepared plenty of it. Serve them on the table with appetizers, how to tease with appetizers, along with roast meat in the Sardinian way and use it to cook. You will see that next year you will prepare even more. Bon appétit!