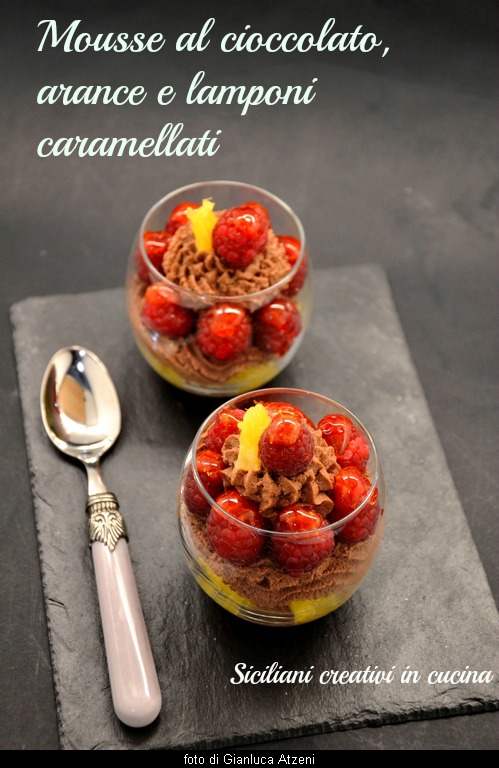 Chocolate mousse, Caramelized oranges and raspberries: This is a clever sweet, friend of the line but also of the palate. Clever because it looks so tempting and even a little’ Baroque, but in reality it is made mostly of fresh fruits, alternating a soft dark chocolate mousse. Easy to make, you will be surprised by the freshness of the Orange left to natural (I recommend, Sicilian Orange Pgi used!), with the intense flavor and creamy mousse and sour and sweet raspberries with crispy caramelized together. Then, I shouldn't say that, but served in glasses transparent is also awesome to see due to the alternation of colors and gloss of caramel. I'd suggest in case, for Valentine's day (party that I dislike, but that needs to be done…) , you had planned to organize a dinner nice, delicious but light. Let me know?

for the raspberries jacks

For the mousse, chop the chocolate fondant. Heat until boiling the 50 milliliters of liquid cream and pour over the chocolate. Let it sit a minute and then, with the help of a spatula, stir until mixture is glossy and smooth. Add the zest of the Orange and Cointreau. Combine the whipped cream until stiff up or get a frothy and swollen. Cover with plastic wrap and refrigerate for at least 3 hours.

For the raspberries jacks, prepare a caramel with the sugar, letting it cook over low heat until liquid and color amber, then carefully (the hot caramel is one of the most dangerous things you can handle in the kitchen), Dip the top of each caramel raspberry in lightly greased or parchment paper and leave to cool on the silpat, the silicone mats.

Peel oranges and peel the cloves in vivo, then make them into small pieces and baste them with a tablespoon of Cointreau.

Composition of the dish: in transparent cups alternate between a first layer of fresh oranges, one of chocolate mousse (use a sac-à-poche to facilitate your work), one of raspberries jacks, then another layer of raspberry mousse and garnish with a Crown and a piece of Orange. Refrigerate until ready to serve. Bon appétit!

Cakes and tarts to make in...

Hi Adina!!!!! Every time I come here I die a little’ for these wonderful recipes…This will also be easy for you but for me it's beautiful…and I would so much taste it oraaaa!!! I love raspberries!
TI sbaciucchiolo!!!!

Berry honey Hi! But as I'd invite you again at lunch to emotional overeating! You know that if you switch from Rome I'll wait with open arms! A kiss to Blueberry!

I pretend to make the caramelized otherwise ok. I'm trying on Saturday I'm going to see what I find. big kiss and good night

I'd really like to see you pretend to make the caramel! You lose some’ crusty but purchases in freshness and acidity. And it's even more light! Let me know!

I'm not good with sweets, but this seems to me to hand mousse. I'll try, Maybe not for Valentine's day I have other commitments! A warm greeting

Andrea Hello and welcome! Is this cake is definitely affordable, I guarantee it. Is’ easy and I'm sure you'll like it! Let me know! ADA