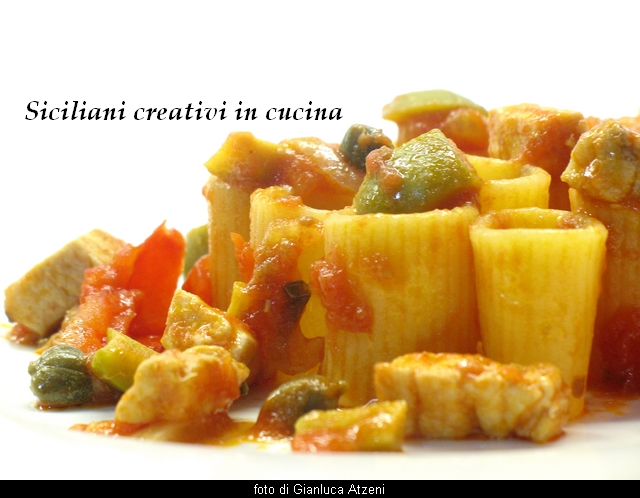 Pasta with swordfish sauce sicilian style. The pasta with glutton sauce is a typical Sicilian dish, indeed right in Messina, my city. What I have revisited in 'fast’ but without losing the taste and scents. Who is of Messina you can not not know the swordfish greedy (just to say, mentions in a book by Alain Ducasse also recipes that Messina is not). A riot of simple ingredients that, put together, become a sauce from the amazing flavor, linked by the thread of the flavor. Even without the fish would be a delicious sauce, but with swordfish or sword fish (Another cornerstone of traditional Sicilian cuisine), the flavor is complemented becoming heavenly.

Differences with the traditional greedy sauce

Now we come to the differences between the rigatoni with swordfish Messina style and the traditional recipe SWORD FISH AT A greedy MESSINESE, are first cooked in the sauce swordfish touches very tall and big. If you want to try it, look at the VIDEO RECIPE and you'll see how simple it is to do. Wanting to make a quick recipe, I used the slices of swordfish that I cut into chunks. For the sauce I proceeded according to the traditional recipe. Once cooked with vegetables, I added swordfish. After a net minutes, I extinguished the fire and covered, to do to remain soft fish but make sure it's sent to the sauce its flavor.

This is a dish of my children ', I really love. I find that this fast version, perfect for those on a budget (let's face it, swordfish is not a cheap fish) and wants to prepare a first course of elegant and fast fish. A perfect combination of tradition and modern tastes, because it's easy, light and tasty. That being said, if every time you want to eat swordfish, have a look at all my RECIPES WITH SWORDFISH for inspiration, all my RECIPES WITH BLUE FISH and my SICILIAN RECIPES. Have a good day! 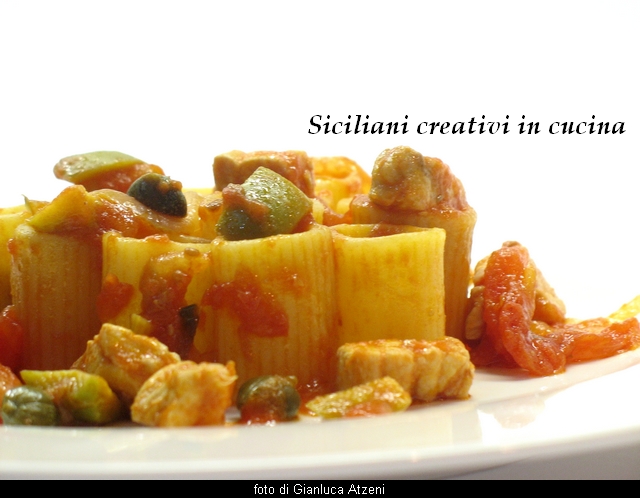 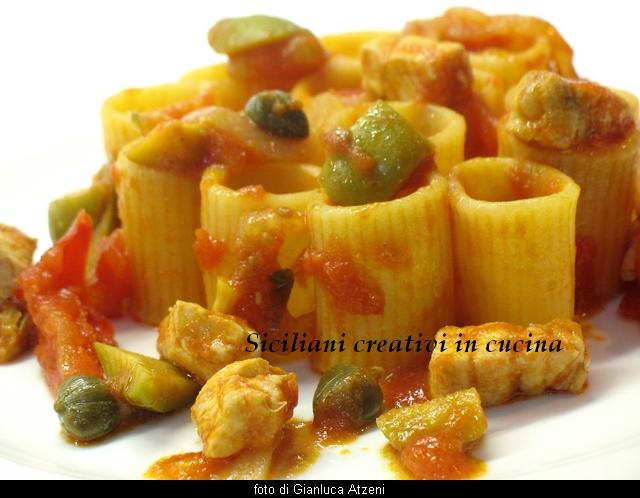 340 grams of rigatoni means (or pasta you prefer)

a large onion or 2 small

a handful of capers from Pantelleria IGP

400 grams of the Straits swordfish 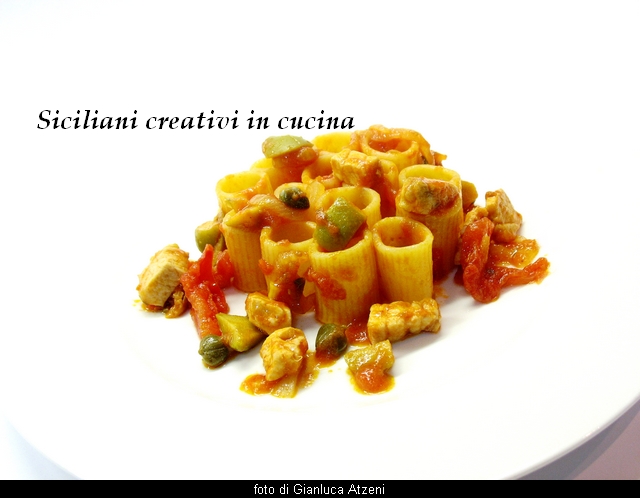 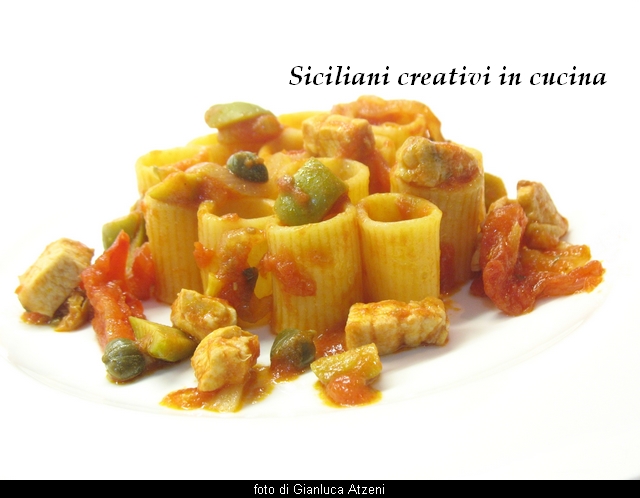 To prepare the pasta with swordfish sauce greedy, clean the celery, removing the filamentous parts, and onion, then finely slice. Put celery, onion and olive oil in a pan. Add a little water and simmer the vegetables over low heat until they are translucent. If necessary, so it does not dry out too much sauce, cover the pan. Once the vegetables are translucent, add the capers and dried, the olives cut into slices and the Pachino tomato fillets. Add wine, to evaporate the alcohol medium heat, salt and cook over low heat until the sauce will not become full-bodied and dense.

Meanwhile, diced swordfish. When the sauce is ready, add the swordfish and raise the heat to maximum. Cook for a minute, turn off the heat and cover, making rest the sauce for at least half an hour: in this way the fish will stay soft and the flavor will amalgamate.

Boil the pasta in salted water and drain it al dente, putting aside cooking water. Season the pasta with swordfish sauce with messina, joining if necessary (but in this case the sauce is very humid, should not serve) some cooking water.

Serve the pasta with swordfish sauce greedy immediately: know that there are some, and I am among them, who like to dust the dish with a little Sicilian pecorino Dop grated. Have a good day!

In Messina the traditionally used pulp for swordfish are greedy Spaccatelle, I hate them cordially and rarely found outside Sicily. I much prefer short pasta or even spaghetti. Another format used, but even that hard to find outside Sicily, are the daisies.

MATCHING: To find the right match for this dish we move on Etna volcano, in Randazzo, where the winery Al-Cantàra It produces pinkish "Amuri", made of native grapes Nerello Cappuccio and Nerello Mascalese. It smells of red berries and pineapple, with a fresh taste and pleasantly fruity. Serve chilled, around 10 degrees of temperature.

But thanks… for so little! You knew this traditional recipe from Messina???

wow adina! that dish!!!! meravilgiosa choice, wonderful reinterpretation for career women like you :) and wonderful selection of ingredineti! basins

I knew you to be 'sicilian lover’ you would have appreciated. They threw Elena! So much!