Made in Italy. The quality rice in Sardinia: bet Rice Srl 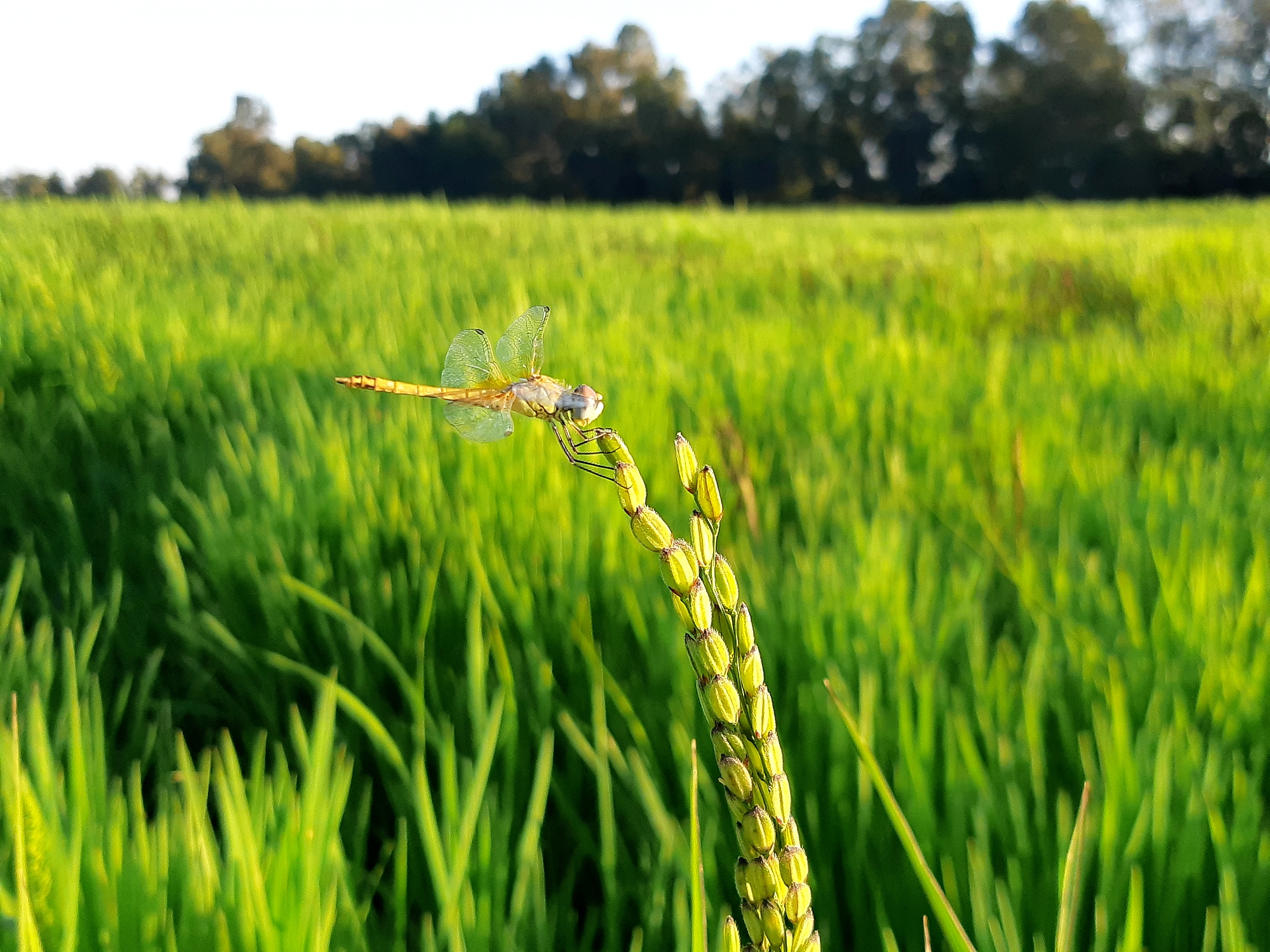 Sardinia is a region full of surprises, not only naturalistic: Perhaps not everyone knows that it is the fourth region in Italy to the area and rice production, after Piedmont, Lombardy and Emilia Romagna and, even, It comes before the Veneto, known for rice “nano avenue”, what I will always recommend to use all my n RECIPES FOR RICE for your risotto as an alternative to Carnaroli. Perhaps not everyone knows that Sardinia is the first and only region in Italy in the rice seed multiplication, thanks to the high quality of seeds that are obtained in the fertile plains around the town of Oristano. In this vast area, north and south of the city, between 1920 and 1930, Mussolini's government carried out the massive land reclamation works, to eliminate the marshes and swamps that made the area inhospitable and malarial, transforming the area into one of the most fertile of all Sardinia. Here, for many decades, you grow maize, vegetables and vegetables and dairy cattle are raised. And that rice is now a reality in strong growth. In Italy, between Pavia, Vercelli and Novara produces over 90% of all Italian rice. However, Also in Oristano this cereal is grown and packed in decades: always used by Sardinian families, Today the island Rice tries to climb the 'Continent', as they call Sardinian. We chose to tell the Sardinian rice seen through the eyes of a young and small company, from 2015, It has decided to launch its own family brand: Riso Liabilities. 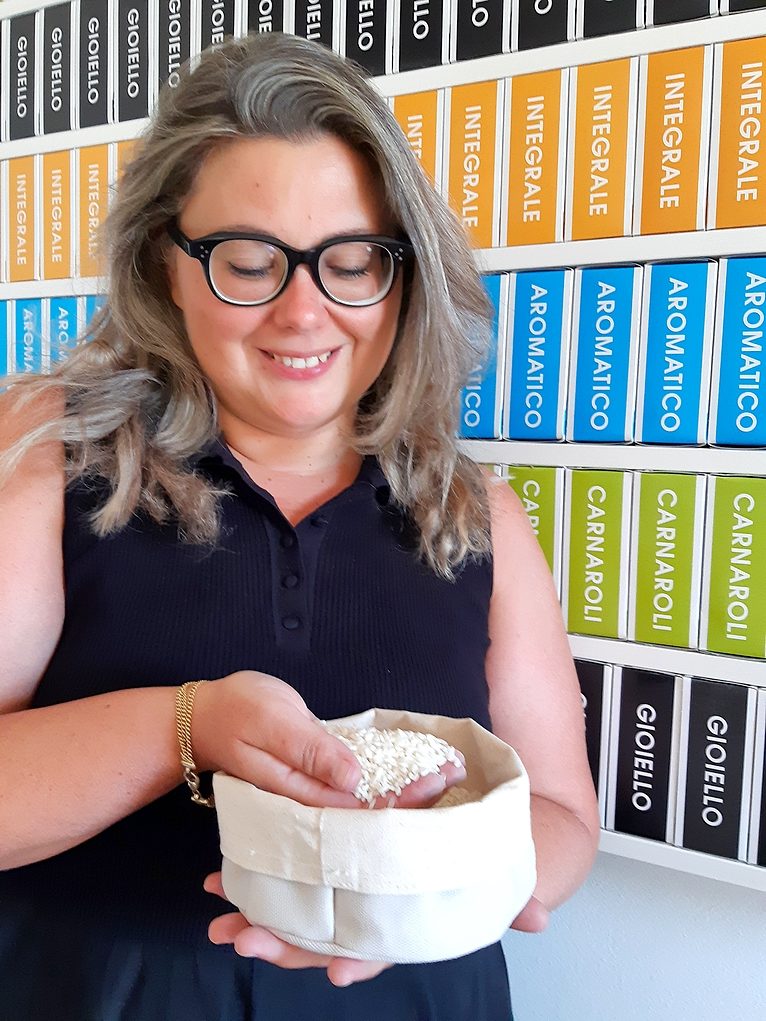 Leading the company there are Genesio Passiu and two sons, Andrea (for the agricultural part) is happy (for the commercial part). The history of this small family business began in 1975, when Dad Genesio, He succeeded his father (Felice Liabilities) and uncle (Gaetano Casu), It takes a far-sighted decision for the time, to not breed more sheep and cows but to plant rice. A revolution. The varieties “Balilla”, “Lido”, “Aries”, at the time widespread, were the first to be cultivated, but soon others were added. In 2000, It is the renovated family farm, in territory Nuraxinieddu (fraction of Oristano), in the heart of the Tirso river plain, where fertile land after the reclamation allow to obtain high yields and quality. For years, Passiu the family sold the rice to other processors, but in 2015 another important decision: It decided to produce a high-quality rice with an original brand, Riso Liabilities, recalling Sardinia and positive emotions with a smile. As of Carnaroli rice Classic, that the family had used, until then, as a personal rice for home consumption. 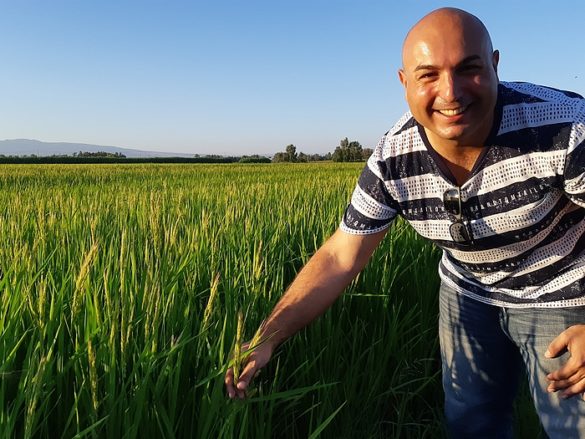 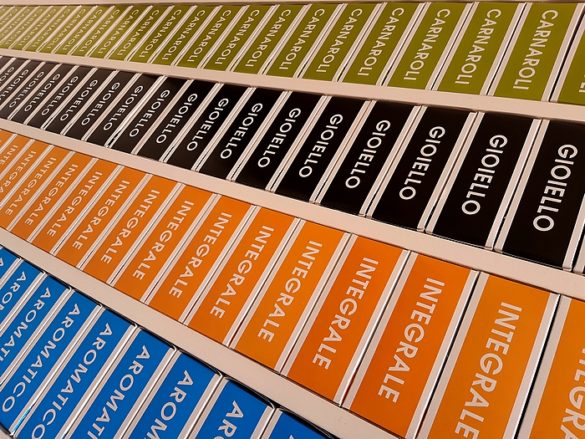 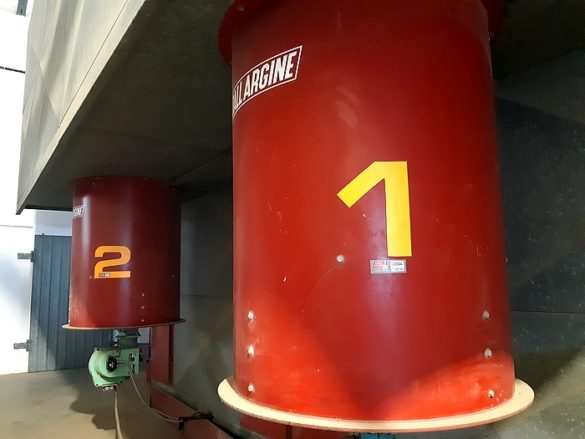 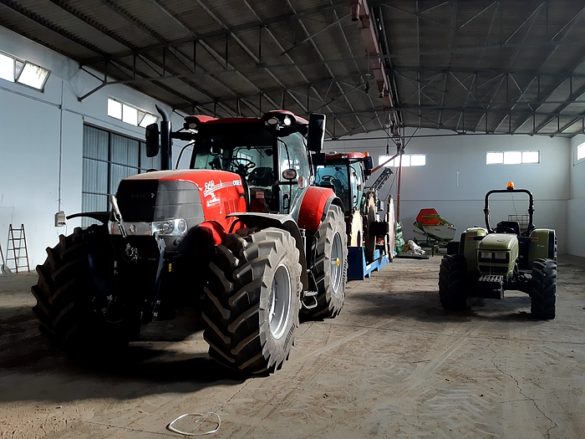 Four varieties marketed, obtained from a careful selection among the 130 hectares of rice paddies: “Whole wheat” (Elettra), “Aromatic” (times), “Carnaroli Classic” and “Jewel”. Felice, commercial manager, tells us that the rice for packaging from the best land, After careful selection and machining with modern tools. innovation, of the rest, It is one of the most significant aspects of Rice Passiu: threshers, tractors, seeders, graders with GPS systems, solar energy for feeding a portion of the structures. A modernity that joins the long dads experience Genesio, careful guardian of the traditions. The productive heart of the company is still a drying dating back to the eighties, but perfectly functional and particularly effective in the production processes. “Innovation is one of our traits. Our product is sold to many other companies, but what we choose to pack the family brand, our rice 'cru', we do not sell it to anyone”, says Felice Srl. 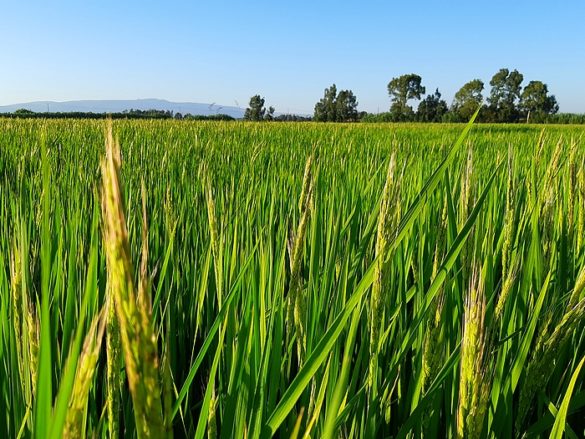 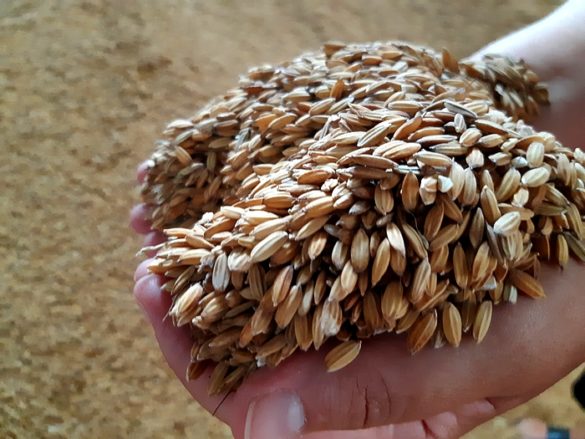 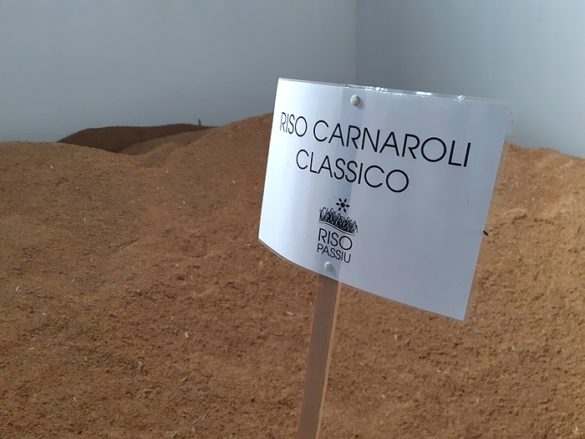 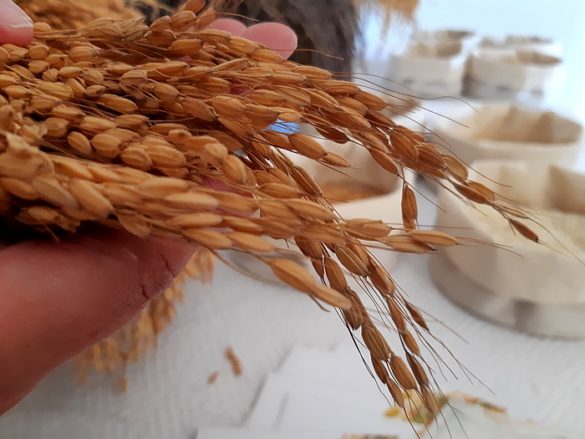 Two strengths on which the company is investing in Oristano. The varieties of rice “Carnaroli Classic” and rice “Jewel”. The Carnaroli Classic, recognizable in the field for the typical mustache poking the end of the plant, has been for over ten years, the family rice, what Felice, Genesio and Andrea have always consumed in private. Appreciated by chefs and consumers for his goodness, for the ability to hold up well in cooking, for the wealth of starch in the phases of creaming. Created in 1975 by crossing varieties of rice “Vialone” and rice “Leoncino”, Carnaroli is now considered the king of risotto. Within a few decades, many similar varieties have been created, because the Classic was a little Carnaroli rice production, which he tended to 'have the pleasure', or to bend because of the high and slender stems and to remain stuck in their machinery because of those 'mustache’ that make it so recognizable. Among the main varieties like Carnaroli, the Carnise, he Karnak, early Carnise: All these varieties are sold with the words “Carnaroli” and account for most of the Carnaroli is produced and sold in Italy, while the original Carnaroli today is identified by the word 'classic Carnaroli'. “We focus on pure varieties” says Felice Srl “and the label we use the word 'classic'. For some years, l’Ente national rice He has created an album of classic Carnaroli rice growers, which lists the companies that produce it. We are present in this book and the rice we produce is protected and is fully drawn”. 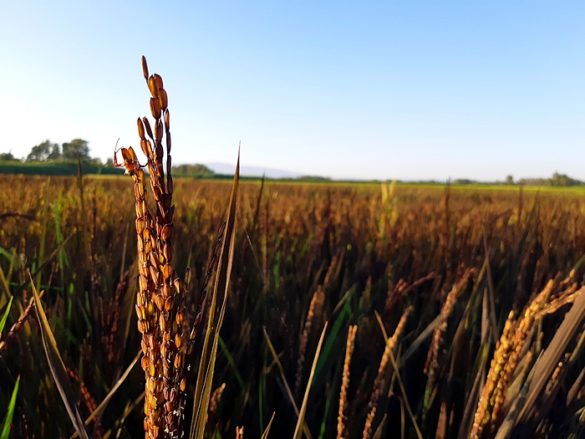 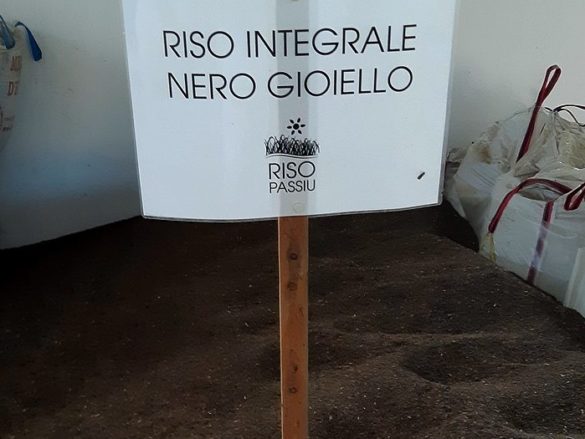 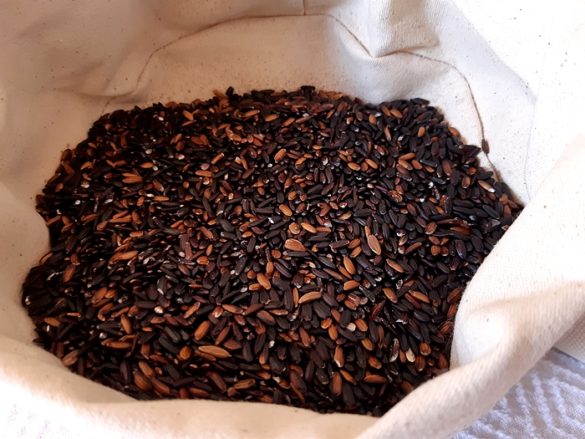 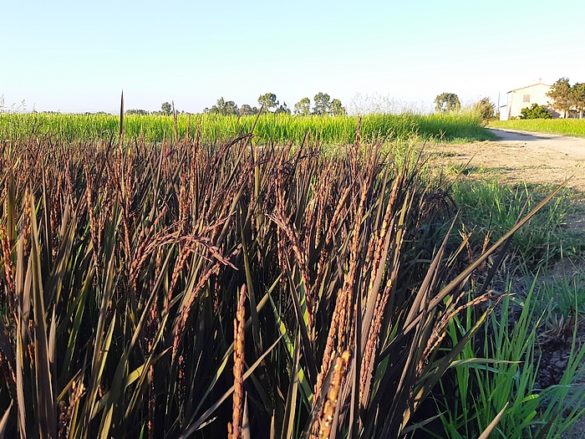 The Jewel Rice is the boast of Rice Passiu. This variety has been discovered by the company in Piedmont “Risi Precious”, in the province of Novara. It is not the result of induced intersections but she was born in the field by a natural cross. The company cultivates Passiu in Sardinia Rice Jewel exclusively and was the first in Italy to cultivate in open field. Today, in Italy, Jewel rice is grown only by Rice Passiu and by the discoverers of the variety . It is a very recognizable black rice, because it has a completely dark plant: purple in the leaves, black and black on the cob in the grain. The Venus rice and Artemis, other varieties of black rice, For example,, but they have a dark cob green leaves. In the field, the expanses of rice Jewel are spectacular and easily recognizable from other varieties, like Carnaroli or Vialone Nano Classic, the newest home Passiu and still experimental. This variety, from Northern Italy and founded in 1937, perfectly fit in the plain of Oristano. 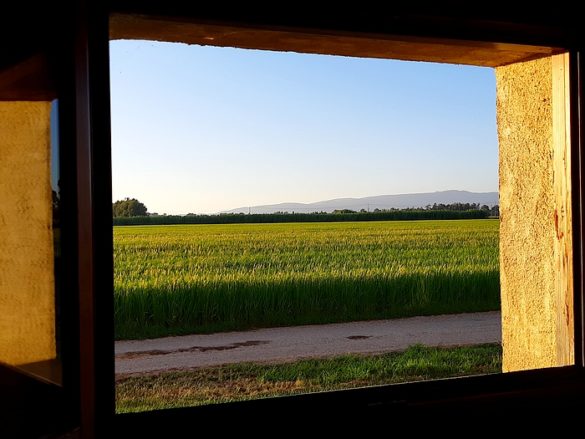 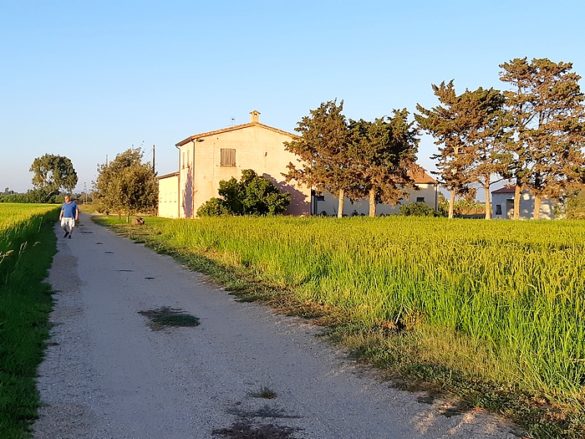 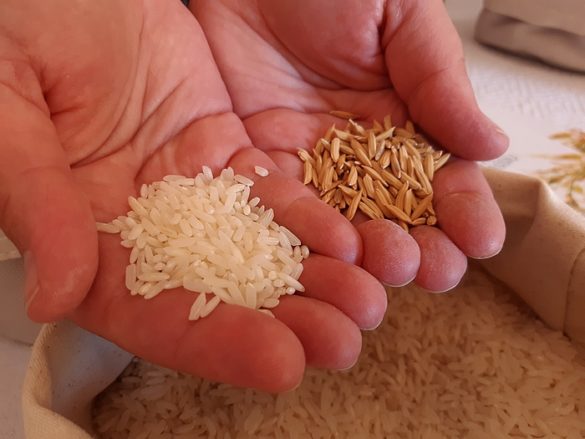 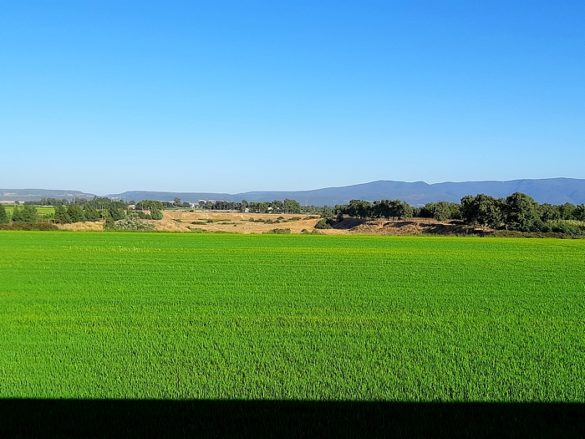 The future of Rice Passiu see on the horizon another milestone, Tourism rice: if we want to say it in a more modern way, rice-tourism. The company's goal is Sardinian host visitors at the family farm, promote weekend in the rice fields, also for training purposes, to explore closely the productive reality and the world of rice. To do this, it will take investment, which also depend on an effective marketing policy. The bet of Passiu family is the one to establish itself on the market as a high quality company, with rice suited to the tastes of the consumers of the third millennium, but also to taste the chefs and haute cuisine both regional and Italian.

Risotto with truffle scorzone with lemon...

Risotto with artichokes and bottarga