NEW POST
The apples in the kitchen: Property, tipologie e ricette
Pizza in a messina pan
Tiramisu with persimmons (without eggs)
Meatballs in broth with fresh vegetables
Stringy spinach in a pan
Chestnuts: Differences, characteristics and properties
The copper of Naples (Sicilian recipe)
Chickpea and mushroom soup (Vegan recipe)
Autumn savoury cakes: 12 recipes
Pizza with stracchino ham and artichokes
Home » The Osteria del maiale nero: the Nebrodi on the table

The Osteria del maiale nero: the Nebrodi on the table

L’Osteria del Maiale Nero, on the Nebrodi, in Sicily, does not betray expectations and brings to the table the essence of these wonderful places. This venue, opened in 2019 by the Borrello family, manages to combine tradition and quality in a rustic but well-kept environment. In this SHORT VIDEO I invite you to enjoy together a typical Sicilian lunch, you should almost smell the scent.

The name of the Borrello brothers is a guarantee: the Trattoria Borrello of Sinagra has always been a point of reference for catering in the province of Messina. Custodians of the gastronomic traditions of the Nebrodi, starting from the black piglet, bred in the wild or semi-wild. Its feeding is left to the forest and integrated, in case of need, with legumes and cereals of local production. The Osteria del maiale nero was born in Raccuja by one of the two Borrello brothers, thus doubling the local dining offer, since between Sinagra and Raccuja there is only a handful of kilometers. The structure is new, opened in 2019 and then renovated in 2020. The fulcrum is a stone farmhouse with large indoor and outdoor spaces. Here is the kitchen, Modern, fully visible. The absolute protagonist is meat: that of black pig, from ribs to sausage. But also beef and castrate.

Unlike Trattoria Borrello, grown a little’ messy as the popularity of the place increased, the Osteria del maiale nero is built on top of a hill, organically and on the basis of a project: enhance in every aspect the territory of the Nebrodi and its productions. The goal is to produce 100% of what then arrives on the plate. Starting of course from the black pig, bred in the woods in semi-wild state, passing through the orchard and the vegetable garden with eggplant, tomatoes, cherries, cucumbers, pumpkins, Zucchini, nuts, onions.

Elegant exterior decoration made of Mediterranean scrub plants and aromatic herbs: Myrtle, Rosemary, Sage, Mint, wildflowers. Beautiful white chairs and tables, the classic checkered tablecloths, the ceilings with the beams of the countryside, the colored buckets with chili peppers and aromatic plants scattered around the terrace, wooden benches and wrought iron tables, peasant-themed ceramics. A rustic but well-kept environment, where it is pleasant to eat and take a break between the courses admiring the green mountains of the Nebrodi. The menu is available a la carte. But you can also choose the classic menu of the Nebrodi Mountains, for strong stomachs and hungry palates. 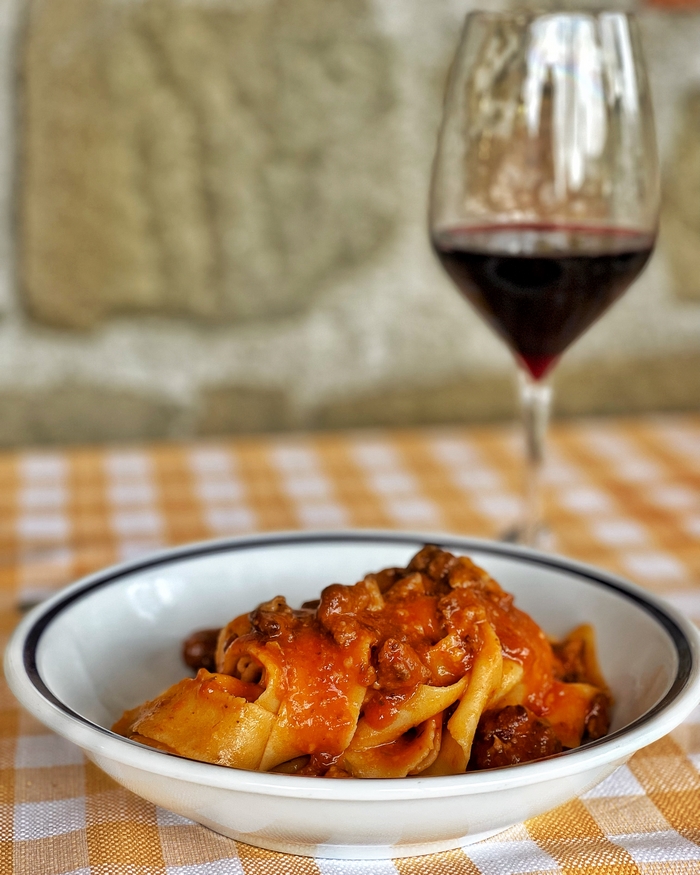 The traditional menu of the Nebrodi

Starting from appetizers: a nine-course series in addition to the traditional platter of cheeses and cold cuts. Everything changes according to the season. The cured meats are all made on the farm with black pork: mortadella, Ham, lard, cooked ham and salami. Then the cheeses: provola of the Nebrodi, The peppered, fried bread, sausage in a pan with eggs and friggitelli (green peppers), beef tartare, mushroom and hazelnut soup.

And still: Fried mushrooms, saffron arancini stuffed with lamb stew, black pork meatballs with sweet and sour sauce, focaccia with lard and caponata (the only thing not up to par, for taste and textures). Apart from the goodness, it should be emphasized the effort to present the dishes of the kitchen of the Osteria del maiale nero. Especially in less traditional courses ,like meatballs, arancini. An unusual effort in trattorias and taverns like this, where often the food is good but a bit’ 'left to itself'. 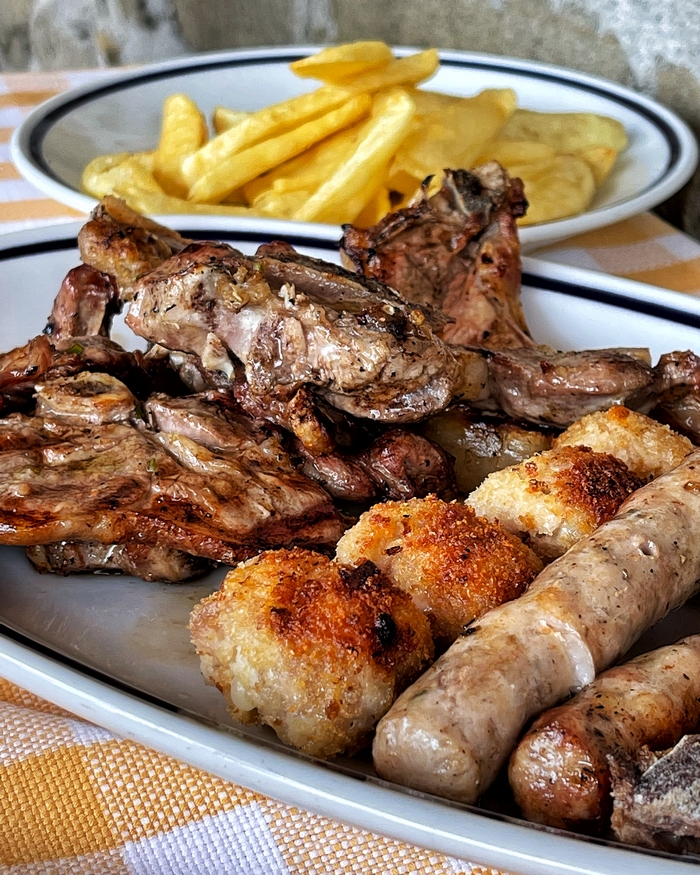 The first courses are the most typical of Sicilian hill and mountain cuisine. Pappardelle or homemade macaroni with water and durum wheat semolina, seasoned with black pork or rabbit sauce, lasagne with sheep stew.

Don't go overboard, because it is mandatory to arrive with a little’ of hunger to mixed grill. Pork ribs and ticks, Sausage, castrato ribs and the traditional Messina-style chops (really well done). The meats cook over high heat and remain soft and juicy. Alternatively, ribs of beef or sliced beef. The embers, As always, makes the difference in aroma and taste, although meat, especially that of black pig, has an exceptional taste. Fat melts in the mouth: it is no coincidence that this is one of the finest pork in the world. 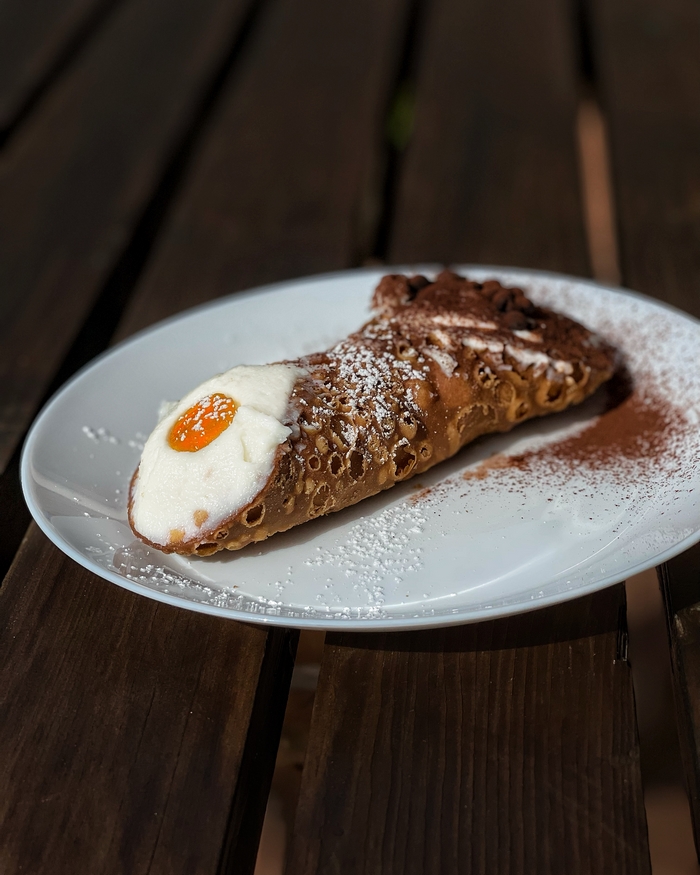 For dessert, at the table has arrived the inevitable Sicilian cannolo: the zest is homemade, ricotta is sheep's. All done the right way. The price? We paid 82 euros, including wine, a Frappato of Salaparuta at a cost of 12 euros. The wine list, almost exclusively Sicilians, it has medium-low mark-ups and inside there are bottles really for all budgets. Young and very friendly staff. On days of 'great crowding', or on weekends, it may happen to wait longer than expected after enjoying the appetizers. An address to save, to mark, to recommend, to taste the true cuisine of this green and fertile corner of Sicily.