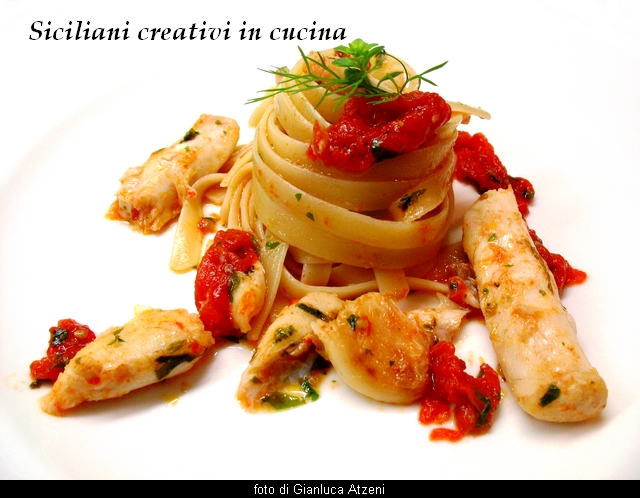 Linguine with flag fish sauce or spatula fish, as we love to call it in Sicily. It is a fish similar to a silver ribbon, season from June to September, spread mainly among Sicily, Calabria, Campania and Puglia. Is’ a fish with white meats, firm and un thorny, suitable for any kind of preparation, including fish sauces. Precisely in this case, the simplicity is charged. A nice plate of linguine with cherry tomatoes, fish flag or any other white fish, herbs, garlic, a pinch of lemon zest and white wine for me represents a delicacy which I don't resist. It is a classic Sicilian sea first, today, rarely found in restaurants.

In the linguine with the flag fish sauce, the flavors of the fish are enhanced to perfection by the acidity of the tomato and lemon and the scents of garlic and herbs immediately transport me home, in Sicily. I used parsley, wild fennel and lemon thyme, but you can also use only parsley and the result will still be a delicate and tasty sauce. How do I know I'm a huge admirer of banner fish, I buy whenever I can: I find that the sauce made with fish flag is particularly tasty and yet gentle. Moreover, If season the pasta as I do, with lots and lots of fish, is also a great dish. Or you can prepare with fillets a second among those that I will list you shortly, and use the bones to make the sauce.

If you want to experiment with some other recipe with the spatula, you're spoilt for choice. You can range from classics FRIED SPATULA FILLETS IN CUTLETS up to the spatula in GRATIN TORTIERA or for Rolls. With the spatula, you can even prepare Parmigiana or the gluttonous BAKED S GIRELLE stuffed. I gave you some ideas? Have a good day.

360 grams of linguine or other long pasta
800 grams of fish filleted flag, with the bones and the head apart
300 grams of tomatoes or Piccadilly
parsley (or wild fennel or lemon thyme), to taste
2 cloves of garlic
salt and pepper, to taste
extra virgin olive oil, to taste
half a glass of dry white wine 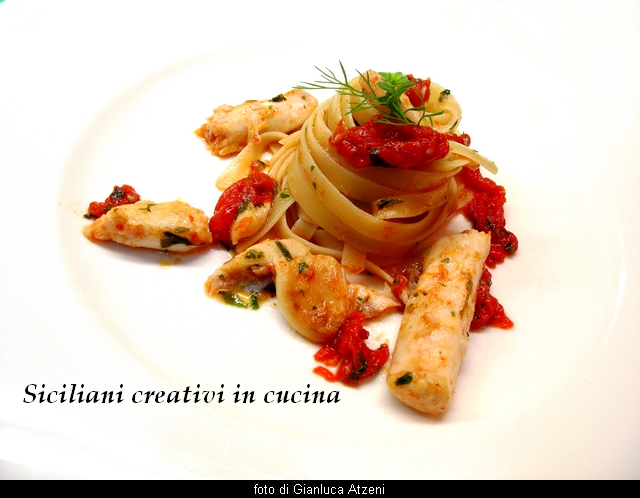 Bleed the head of the spatula for 15 minutes under running water, then dry it with care. Put the oil in a saucepan, poached garlic and a few branches of aromatic herbs and fry until you feel the scents release, then join the bones and head of the spatula. Season with salt and add the tomatoes peeled and internal (Cross slit and plunge them in boiling water for a minute, you will Peel without doing tantrums). Deglaze with white wine, evaporate the alcohol part, cover and cook for 20 minutes.

At this point, remove the tomatoes and set aside, then filter the fish sauce through a strainer to mesh netting. Place in a pan the fish sauce (It will be quite liquid) and tomatoes, combine one tablespoon of chopped parsley and bring to a boil, Next, add the fillets of spatula, that in the comic lesseranno absorbing any flavor. Fire off, adjust the salt if necessary and add the grated lemon rind.

Boil the pasta in salted water, drain it al dente and finish cooking in the Pan mantecandola with fish sauce and fish fillets. Complete with a little more chopped parsley and serve. Bon appétit!

MATCHING: In this combination, does the Bill all the subtlety of a Pinot Blanc, a vine widely used it finds favorable climates in South Tyrol to the ultimate expression. We chose the Pinot Blanc produced by Cantina Caldaro (300 acres of vineyards and over 400 members). This wine is characterized by scents of golden Apple and PEAR, with a mild taste, tangy and fruity finish.