Made in Italy. The tradition of the Pythons Messina at the bakery Laganà

It had been a long time since I wanted to show you how pythons or pythons are made messina, one of the typical recipes of my city, Messina. And show it to you in a VIDEO RECIPE tell you about the perfect python. But first I needed to find one that represented the best of tradition and the ancient recipe, of which I cherish perfectly image and taste in my memories. Many samples, dozens of locals tried, but many disappointments. Two principal reasons of my disappointment: l & #8217; dough and the filling. The Python (or pidone) is a kind of fried and stuffed hot Pocket, made with an Unleavened dough made from flour, lard, wine and water. A slurry that must be peeled, pulled into a subtle and that FRY must be full of bubbles, becoming crispy but not greasy. Inside, the filling is made of Endive salad, salted anchovies in olive oil or #8217 and;, cheese tuma or first Sicilian sea salt, black pepper and extra virgin olive oil (There are those who also adds some tomato fillet in shell). Now, for many years now in Messina this kind of Python is almost nowhere to be found, because it was put aside in favour of a Cornish pasty dough, coarse, with a thick paste, No anchovies (retailers say consumers don't like), without the tuma or primo sale because they are too expensive and have been replaced with a cheese, cheaper, that makes it tasteless. This type of Python is completely different from the original of my childhood: I still remember the taste of most Python voucher of Messina, made by focacceria “Oliva”, via Tommaso Cannizzaro, Unfortunately now closed by time. 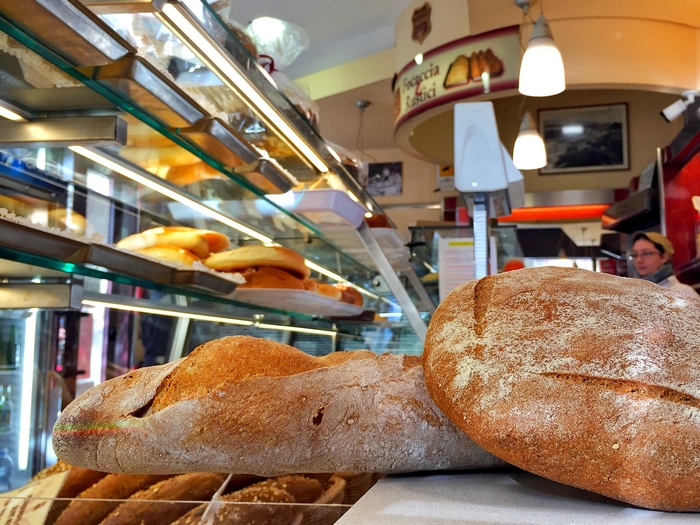 Gianluca and I in #8217; last year we shot dozens of & rottisserie and takeaways of Messina, by purchasing, tasting and often throwing dozens of pythons. Even where the dough was approaching all & #8217; original (rare event), all internal we always found only #8217; & cheese, a low cost product that is obtained with the scraps of the processing of milk, representing the massification of modern taste. Our research was interrupted when we arrived at the Bakery Laganà via Garibaldi. Here, to our great surprise and satisfaction, We found the taste and appearance of the traditional #8217; l & Python. And decided to do some to question the proprietor, Christmas Lace, Young Entrepreneur of 35 years, with very clear ideas on his work and on his city's culinary tradition. Christmas arranged quickly a practical demonstration and handmade (given the large numbers of the bakery, Pythons Messina are typically made using mechanical mixers and dough Sheeter) by preparing this emblem of the Sicilian street food. And finally I can show you the video of how the Python maiden.

The bakery Lace was born in Messina in 1968, opening it is Giuseppe Laganà, Christmas dad. The venue was always in Via Garibaldi, and in the change of venue made in 1972, four years after & #8217; opening, has moved a few hundred meters in a newly constructed building, where it remained until today. In 164 square meters of shop, they are on two levels, work 12 people between lab and sales staff. Christmas began working at the bakery as a child, doing all the way up: from the cleaning of trays up the mixes in the night. When his father fell ill and could no longer hold the ranks of & #8217; family activity, Christmas took over the driving of & #8217; company. Today he is married, He has two children and still has so much passion for his work, for the Sicilian tradition and good things. Even his sister, Consolata, working in the family business #8217 &;, as well as his cousin who just met bakery l & #8217; love of his life. And in the bakery is not difficult to find even the cashier Mrs. Concettina, sister of Giuseppe Laganà, who likes to stay in business despite his 80 years.

The bakery Laganà prepares approximately 150 Pythons per day (costs 1,5 euros and weighing about 180 grams, of which 80 of dough and filling 100), including the traditional ones with cheese tuma and anchovies, but also great Sicilian arancini Messina style, get a pyramidal shape and served with meat sauce and bits of mortadella. The ingredients used are all Sicilians, Why is Christmas on the origin of the raw materials is not willing to compromise: The flours, salted anchovies by Benedetto Scalia in Sciacca, l & #8217; olive oil (cultivar Nocellara), primo sale cheese. For frying, Christmas Lace uses only peanut oil. The healthiness of frying is supervised by a system (called “Vito oil”) that monitors the concentrations of potentially harmful substances, allowing a correct change of & #8217; oil.

The bakery does not just produce bread with sourdough and ancient grains Sicilians, including Tumminia, Perciasacchi, Russello, but local tradition is also a deli that offers, for lunch and dinner, the famous arancini Messina, the mozzarella in a carriage, La focaccia maiden (with cheese tuma, Escarole, anchovies and tomatoes to shell). In terms of desserts, the laboratory produces some of the most typical Sicilian pastries and Messina: Queen cookies with Sesame, the nsudde and #8216; piparelli & made with almonds, toasted, but also sweet tarts and leavened by breakfast as Apple pies, croissants, Tarts. Inevitable Sicilian cannoli and pignolata maiden, But even some minor refinement that is rare to find in bakery, as the Cray-fish with fresh ricotta or custard. During the holidays, Christmas also produces large leavened products such as panettone and colomba, all Sicilian ingredients in & #8217; dough and suspension, by #8217; raisins candied all & Malvasia. Is, If you find yourselves in Messina at the right time, You can find the rare mustard (made with red wine and grape nuts) and Quince jelly. Is, If you want to taste some local specialities, for lunch you will find some ready meals typical of Messina as pasta incaciata, Eggplant Doublets, the braciolettine of flesh, maccheroni alla norma, l & #8217; seafood salad rapier.

Made in Italy. Sapori di Sardegna:...

That good news Ada! I hope to return to Sicily in 2018 (We have 2 No 3!) and I will certainly go to the bakery Laganà: This year in Trapani unforgettable quick lunch at a bakery. Tasty Sicily wishes!
Luciana
Padova

And we in Sicily we are waiting! And if you let me know where to go I give you a couple of pointers so you will love my island even more! Happy holidays Luciana!

That good that Nice and tasty recipes that you have in Sicily, It's a blessing in disguise your blog that makes known Sicilian delicacies

But thanks! I think that Italian cuisine is all so wonderful, from Valle d'Aosta to Sicily. I don't deny that I have a soft spot for my island, but I also love contaminate dishes with ingredients from across Italy. You're a sweetheart! Happy holidays!