Made in Italy. Robiola di Roccaverano Dop, Excellence goats in the hills Unesco 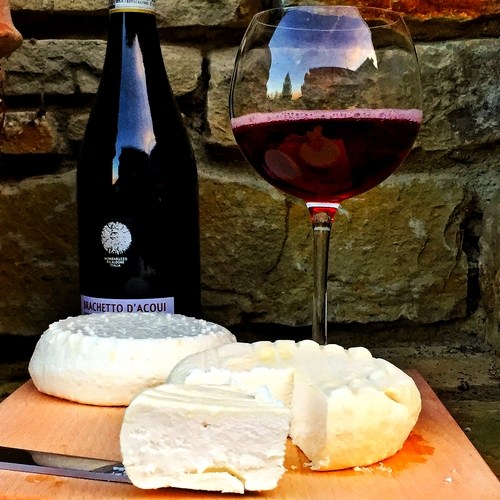 Soft, slightly sour taste, with notes of yogurt and fresh cut grass when it is freshly made and, via via, more flavor and hazelnut-prone when he spends a few days, even spicy if seasoning gets extended. Is’ the Robiola di Roccaverano Dop, a Piedmontese cheese extraordinary in its simplicity, that is becoming increasingly demanded by top chefs and consumers. I had already decided that in my four days in Piedmont, in the hills of Monferrato Asti and Alessandria that have become Unesco World Heritage, I would have absolutely witnessed the production of this cheese. With the help of a young producer, Machinjili, and of the Consortium of Brachetto d'acqui, I could not only see up close the productive cycle, but also to turn a video the different stages, starting from the origins: herds of goats. The first traces of this robiola are presented in a manuscript ecclesiastical 1899, that shows the history of the parish of Roccaverano from 960 to 1860: Here we speak of robiola, that was being sold in local fairs and considered a product “excellent” and already exported in France.

But let's start from the beginning: the Robiola di Roccaverano Dop regulations, that has obtained the protected designation of origin since 1996 (goat's milk cheese first to have obtained the Dop), is very restrictive, in order to protect consumers but also for the manufacturer. First of all, It starts from the obligation to use for at least 50% of the whole raw milk cheese of goat, integrated with a 50% in variable amount of whole raw milk from cows or sheep: currently more than 99% of production, though, is done using as in antiquity the 100% goat's milk because it is on this trait that link producers and two products (100% Goat or mixed), they are also distinguished by the mark. Today we produce about 370 thousand forms of robiola and just 400 are mixed milk. Producers are fifteen, While they are 19 municipalities in the provinces of Asti and Alessandria where it is allowed to produce the robiola di Roccaverano Dop. 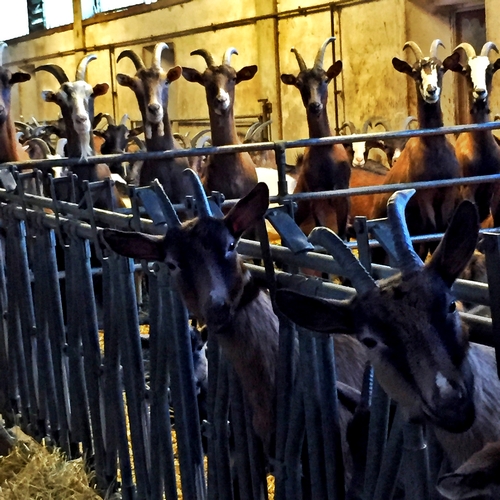 Robiola can only be produced from the milk of goats Roccaverano and race Camosciata Alpina and their intersections. The sheep must belong to the breed of the Langhe, While cattle breeds accepted shall be the Piedmontese, the Bruna Alpina and their intersections. The number of goats must match a specific quantity of land for grazing, required for cattle from the month of March to October. There are also rules for animal feed: at least 80% of forages, Greens or preserved, must be from the production area and be free of Gmo, While the remaining 20% of the feed can come from the Piedmont region. Is’ clearly banned the use of maize silage. From the point of view of quality goats live in a natural environment, feeding on grass of the field, or forage in the stables during the winter months. Produce a special flavour milk and closely linked to the territory of production. 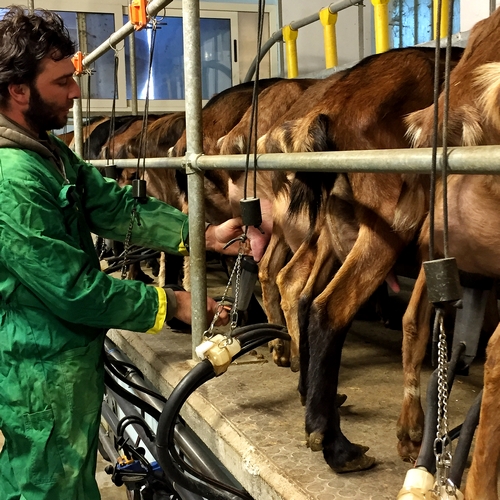 Now, I like all animals and of course I fell in love with Matthew's goats, from the smallest, almost as soon as nate, until those already considered ' old ': are bright and extremely intelligent animals, Matthew knows them one by one and so did his wife and his child, that doesn't even have a year and that the barn is completely and wonderfully at ease. Milking, in the small company of Matthew, It produces about 100 robiole per day, is made with an automatic system of last generation, a great investment done partly with European funds for agriculture but mainly with the sacrifices of their own work and that of his father Gabriele. The 180 goats of Matthew produce about 200 litres of milk per day and to make a 250-300 grams weight robiola, It takes 1,8-2 liters of milk. 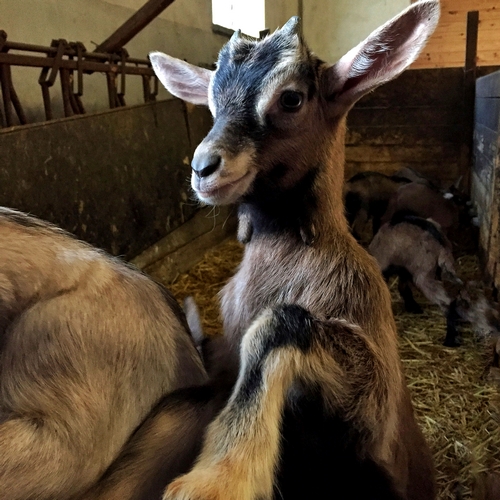 Robiola cheese is produced with two consecutive milkings, one in the morning and evening stars. The proceedings, as you will see in the video, is extremely simple: the milk will be added before the natural whey Starter (a part of serum preserved by treating the day predetente) and then the rennet (veal). The milk is left to rest from 8 to 36 hours to promote acidification, in one-liter containers until it forms the curd. At this point the cottage cheese, usually weighing 300 grams and a diameter of 16 cm, is transferred into molds and left to drain for draining, with continual turning to favour the Elimination of serum. Then dry on both sides is salted and allowed to mature at a temperature between 15 and 20 degrees for at least three days. Only after the fourth day from production we can define this cheese a Robiola di Roccaverano Dop. 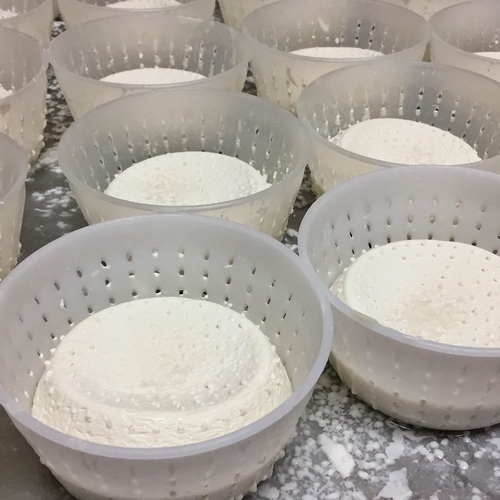 Robiola di Roccaverano Dop (which is also Slow Food) has no crust (the most refined natural bloom of mold can have a), from candid color inside and that, outside, ranges from pale yellow to reddish brown depending on age: You can eat fresh, already the fourth day, or you can leave it to mature. By the 10th day onwards is considered aged, but the seasoning can also get amazing time periods. 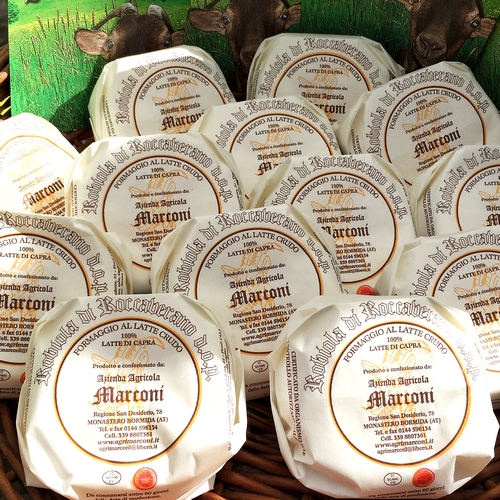 I tasted it in six weeks (more than 40 days), with a strong taste and full-bodied, and more than 3 months, pungent and complex, perfect to be grate. There are also honed in for six months (180 days), completely dehydrated, offering an amazing taste. Can be combined with mustards, honeys, composed and accompanied by special wines as Brachetto d'acqui Docg, Vernaccia di Serrapetrona, but also of still wines passiti red Sagrantino di Montefalco raisin wine, or white wines from dried grapes as Passito di Pantelleria, Torcolato di Breganze, Picolit friulano, Recioto di Soave. Obviously, My advice is to experiment in the kitchen: for a delicate fondue, a risotto or a sweet amazing you only need the Robiola di Roccaverano Dop and your imagination. 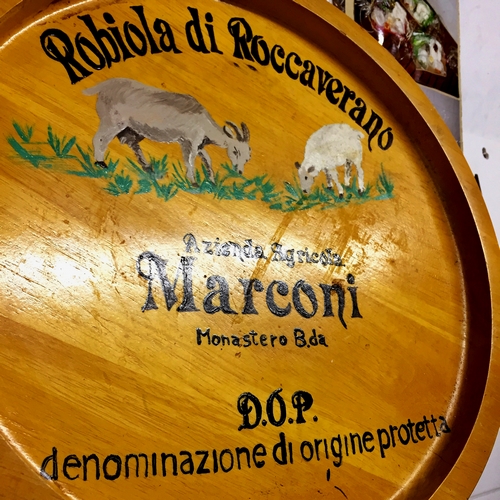 The pumpkin in the kitchen: variety, property...