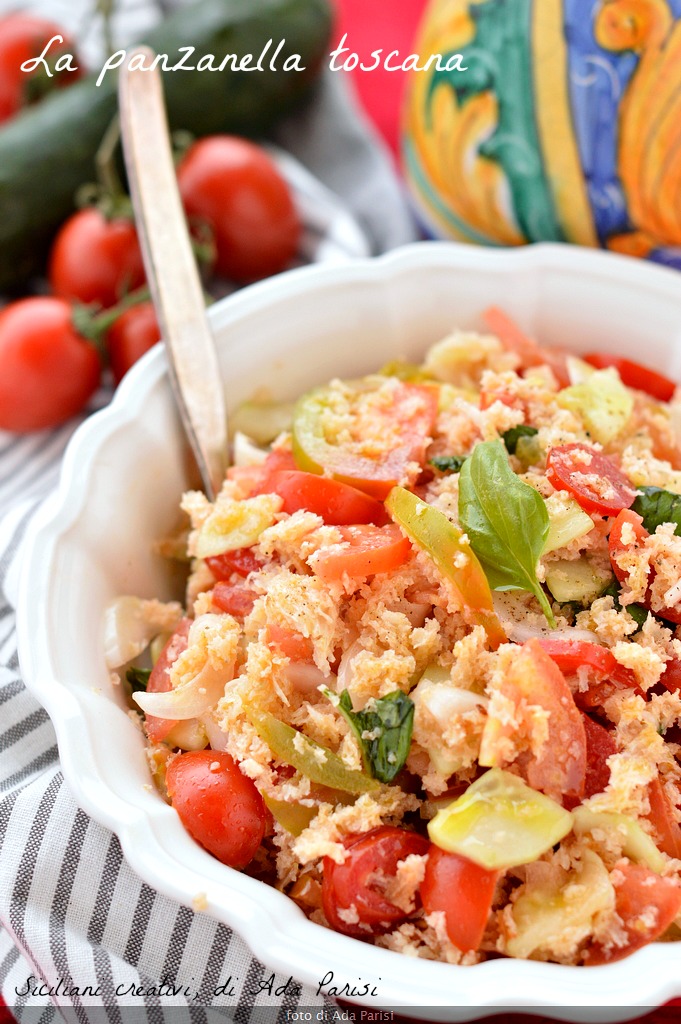 Today Tuscan panzanella, a poor and summery dish really extraordinary. The panzanella is a typical Tuscan recipe and it's a recipe farmer, tasty, nutritious and vegan. Born as a single dish, originally just made with stale bread (strictly unsalted Tuscan bread), onions, extra virgin olive oil and salt. The tomatoes came after, as well as cucumbers and basil. Tuscany is a land of great dishes made with little, as the Pappa al pomodoro, the Ribollita or the ACQUA COOKED WITH MAREMMANA.

Today the version considered more traditional is precisely this one with old bread wet in water and vinegar, tomatoes, Basil, cucumber and onion, but there are countless variations and additions with which you can customize the panzanella: tuna in oil or fresh, shrimp or other fish, olives, with different vegetables. In fact, Tuscan panzanella lends itself beautifully to become a canvas on which to draw your favorite dish.

The key ingredients of panzanella

I would not be respectful of traditional Tuscan cuisine if you do not you indicassi, among the ingredients, it is mandatory to use the DOP Tuscan bread (the one without salt) and Dop Tuscan extra virgin olive oil. But of course in the absence of these ingredients you can replace them, provided that the bread is wheat (the bran has another grain) and the oil is 'character'. As for onions, green light to hold and sweet onions such as Tropea or to Cannara Umbria, nearest territorially. With regard to the tomatoes, My advice is vary, using multiple types to get different tastes and textures: I used Datterini, Pachino IGP, Camone and cluster tomatoes.

Panzanella is a fresh summer dish, also thanks to the use of vinegar. The bread, In fact, it should be kept soaked in water and vinegar for 10-15 minutes, then wrung out and finally crumbled with hands coarsely. Then they will think oil and vegetation water Tomatoes dampen further. The execution is simple, just choose fresh ingredients and great quality and the Tuscan panzanella it keeps perfectly in the refrigerator up to 3 days. Indeed, There tips to prepare at least 3-4 hours in advance, It will be much more flavorful. At this point I suggest you take a look at all my OF SALAD RECIPES and I wish you good day and good Ferragosto! 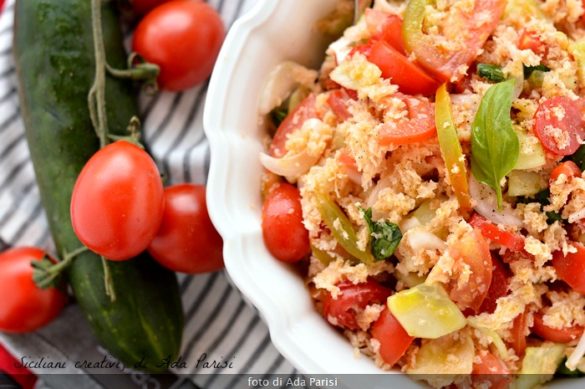 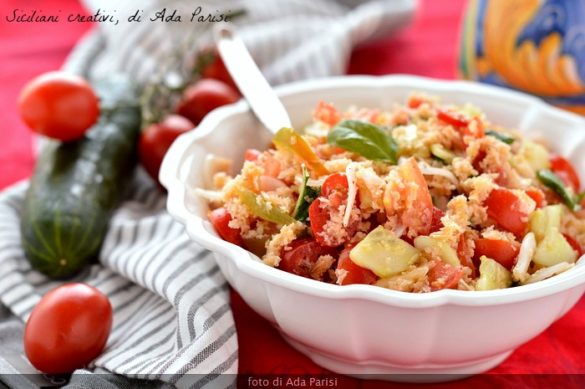 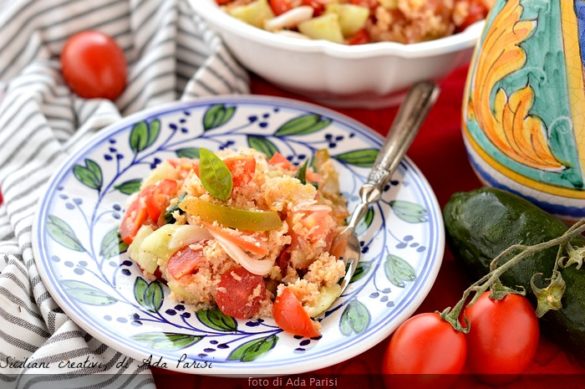 3 tablespoons More other wine vinegar for seasoning to taste 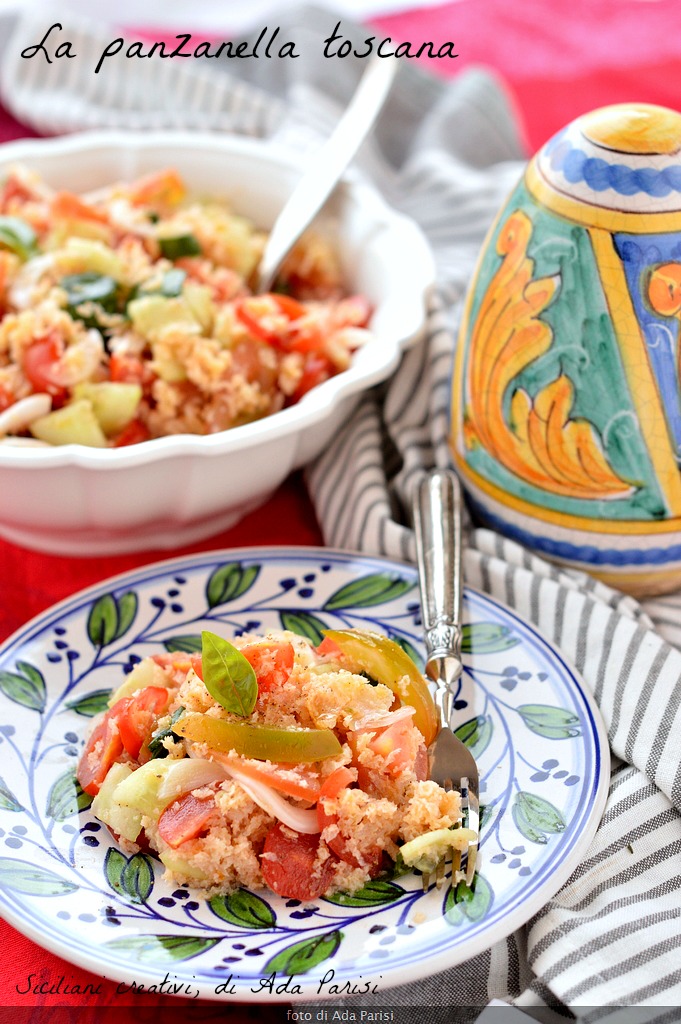 I suggest you prepare the Tuscan panzanella with at least 2-3 hours in advance (you can also safely prepare it the day before). Put the stale bread soaked in water and vinegar. While the bread softens, wash the tomatoes, peel the cucumbers and onions.

Slice not too thinly onions, Slice cucumbers and chopped tomatoes (in half if they are very small, or in quarters or slices, It depends on the tomatoes that you have chosen). Add lots of fresh basil broken hand and drizzle with extra virgin olive oil, salt and freshly ground black pepper.

When the bread will be softened, wring perfectly (otherwise the panzanella be aqueous) and crumble roughly with your hands directly into the bowl with vegetables. Mix well and, after sampling, season according to your tastes with a little more extra virgin olive oil, salt and a splash of white or red wine vinegar.

Cover the panzanella with foil for food in contact and store it in the refrigerator for at least 2-3 hours before serving. Panzanella Garnish with a few leaves of fresh basil and good appetite!

OPTIONS: i remind you that this is the basic version of the panzanella, but you can really enrich it as a favorite: fresh tuna or in oil, other vegetables, pieces of cheese, grilled chicken, pickles or pickle, hard boiled eggs. In short, enjoy yourselves.

Browse fast with tomatoes and feta

A delicacy for the summer
Thanks
A big kiss

hello Elizabeth, Thanks to you