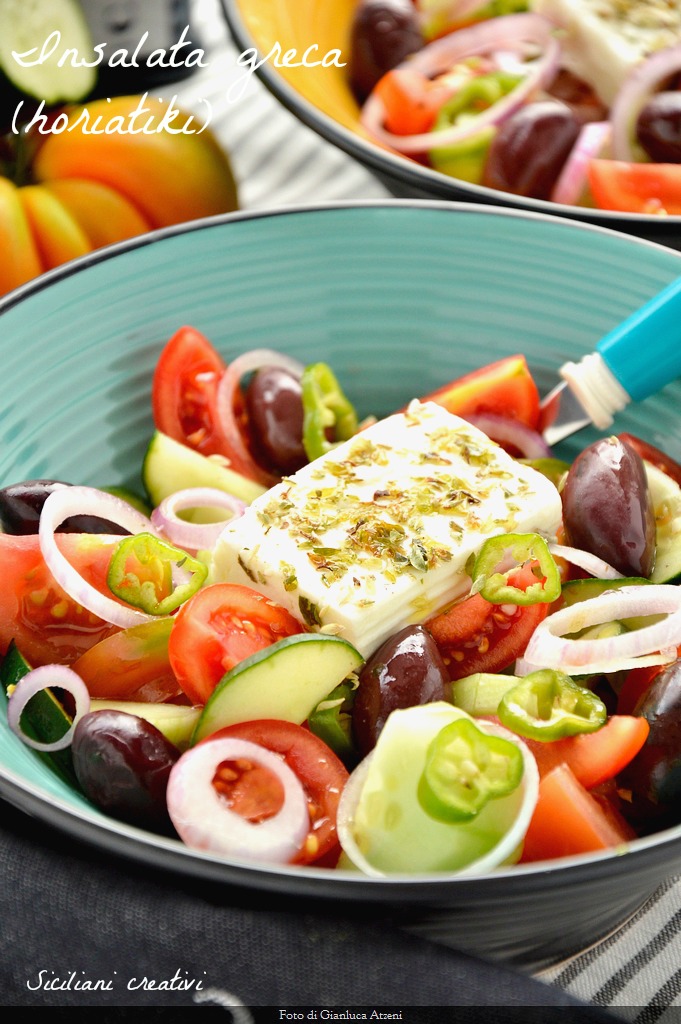 Greek salad: original recipe of the so-called “horiatiki”. I was long undecided whether or not to publish a recipe as simple as the recipe for Greek salad. But in the end I thought that summer in many prefer the salads and not everyone knows about the Greek. A salad that actually is really a joker in the kitchen, for its simplicity and rapidity of execution. So are many OF SALAD RECIPES easy and tasty.

So, here is the original recipe of horiatiki, ie the Greek salad, prepared with tomatoes, cucumbers, Onion, green pepper, Greek black olives, Greek feta and oregano. Is, Obviously, extra virgin olive oil, how to take a dish of one of the most beautiful towns overlooking the Mediterranean Sea. We used a light fruit farm Cannavera (Dolianova, South Sardinia), obtained from the typology (cultivar) Bosana.

Unfortunately for me, I ate authentic Greek feta on site, the industrial one that arrives in our supermarkets is only one version of a quality less than the original, salty and gritty. But we must make a virtue of necessity. Although I found a similar vaccine cheese, you obviously can not call “feta”, produced in Sardinia, in the village of Thiesi, which it is a true poetry.

That being said, do not skimp on extra virgin, Be Parks with vinegar (a drop is sufficient), sbizzarritevi on tomatoes because they correspond to different types perfumes, tastes and textures and this will make it more appealing salad. Good day and good appetite. 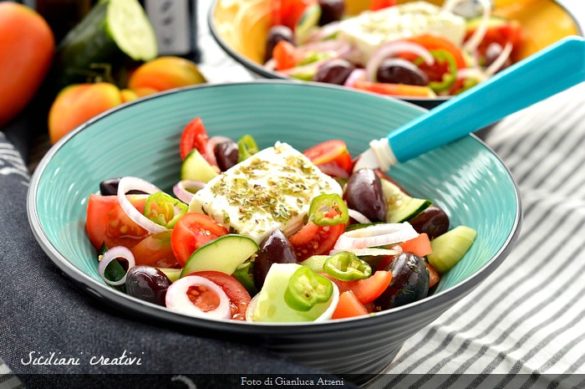 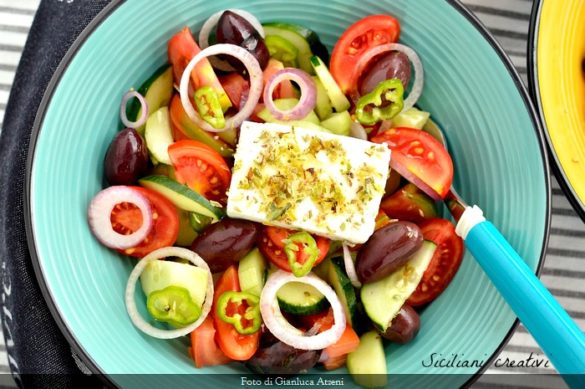 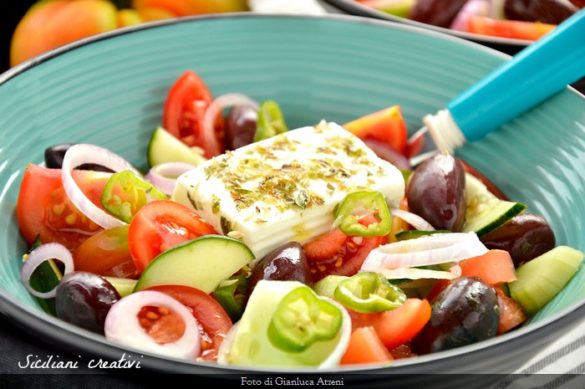 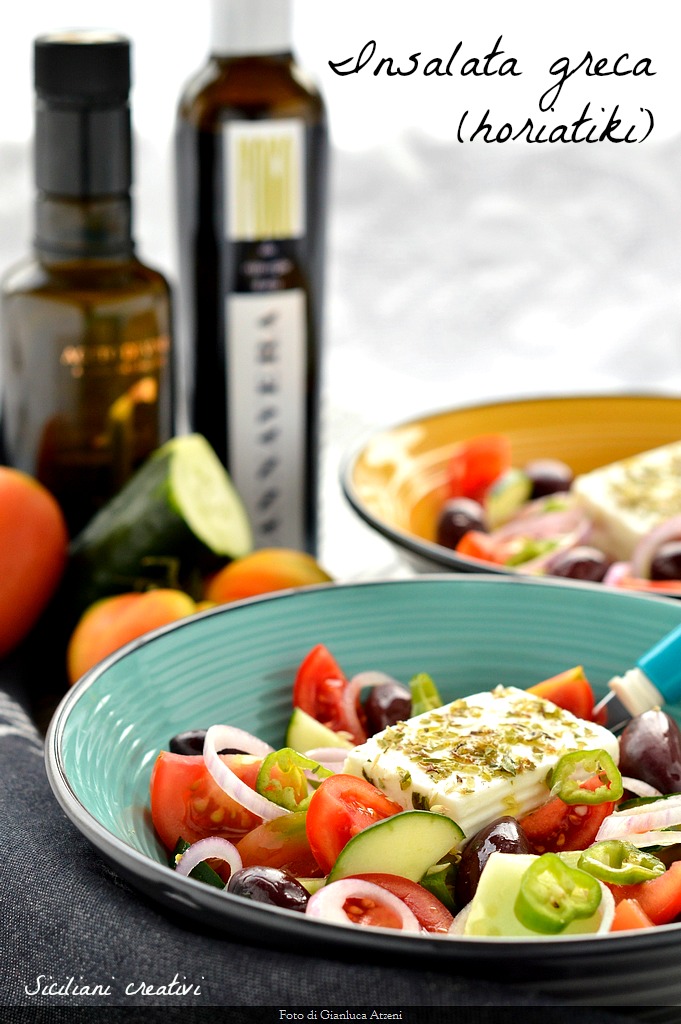 Greek salad is very easy, basically you just wash and peel the vegetables and cut them harmoniously. Let's see how.

Wash the tomatoes, remove the upper part and cut in half and the Pachino Datterini, in half and then into small pieces or the plum tomatoes for salad. Of course you can choose the types of tomatoes that you prefer, one or several, as I did, seen that tomatoes have very different tastes depending on the type.

Wash the cucumbers, remove the peel and cut them in half lengthwise, then at regular slices.

Peel the onion and slice into thin rounds.

Wash the peppers, eliminate the two ends, the seeds and white filaments inside and slice it into washers.

I suggest you put all your salad (Peppers, tomatoes, cucumbers and onions) in a bowl and season with salt, wine vinegar and extra virgin olive oil, stirring with care and long. Then, once the Greek salad is perfectly seasoned, Serve in dishes or in individual holsters. Add to each holster 5-6 black olives and place in the center of each salad of feta a rectangle, cut quite thick. Only on feta deploy abundant fresh or dried oregano and drizzle with another string of extra virgin olive oil. Your Greek salad is ready, Taste it immediately. Bon appétit!

MATCHING: Bresca Beer, to miele, produced by Brewery Terrantiga San Sperate (South Sardinia). An amber beer, with a compact and uniform foam, with a very fresh taste, with sweetish tones balanced by the bitterness of the hops used.

You can prepare you need for the salad in advance and keep everything covered with foil for contact refrigerated foods. You do not have but never, I say never, if it does not dress it ready to serve, otherwise the greek salad will become soft and watery. I recommend.

You can also try this salad without the vinegar. Many use it, but traditionally we don’t add vinegar. Otherwise your recipe is very good! Greetings from Greece!!!

Anna, Thank you so much! I will try absolutely it without vinegar! I love Greece, I studied ancient greek at university and visited Athens and other places, so beautiful!

What a delicious salad …..l'ho I have done and as always very good.
I thank you very much for this wonderful recipe
Hello and see you soon
Alexander :)

Hi Alessandro, I'm glad that the recipe is managed well and I'm happy that I always follow.
A greeting and… See you soon.
ADA