Cold fregula salad with celery tuna and bottarga. Good and simple. Summer, time of cold salads, You can prepare before and representing a tasty dish. This is a nice alternative to rice salads or other cereals: Sardinian fregula is salad topped with tuna belly in olive oil (always sardo), celery, corn, black olives, Sun-dried tomatoes and bottarga. This salad is highly scented, Thanks to the fresh basil, and it's a great dish.

Fregula gives a special touch, to this salad, but I'm biased because I love it. In my opinion it lends itself perfectly to summer salad recipes because it remains al dente and well grained. Like l’saffron fregula salad, tomatoes and almonds, which is also vegan. If you can't find the fregula, you can replace it with rice (both basmati is integral), spelt, barley or even pasta if you prefer. If you don't know what’ it's the Sardinian fregula, you can take a look at the Video preparation of Sardinian fregula on my YouTube channel. And maybe even learn how to prepare it at home.

If you love Sardinian cuisine, have a look at all my SARDINIAN RECIPES, from seadas to macaroons and my RECIPES WITH SARDINIAN FREGULA. Have a good day! 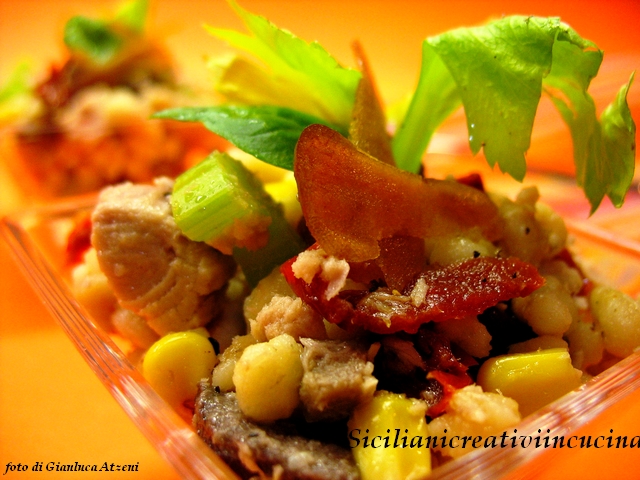 Boil the fregula in boiling salted water according to the cooking time indicated by the pack. Drain, season it with a little olive oil so that it remains well grained and let it cool.

Meanwhile, drip the tuna in oil, stone and chop the olives, drain the corn and flush it under running water, clean the celery from all filaments and cut into thick slices about 3-5 mm and thinly slice bottarga. Slice into strips dried tomatoes.

Once the fregula has cooled, combine the tuna, corn, the olives, dried tomatoes, the celery and Basil chopped up (by hand, I recommend). Drizzle with olive oil and with lots of black pepper. Serve the fregula salad garnished with a few slices of bottarga, a leaf of Basil and celery.

MATCHING: Blend of Syrah and Vermentino, two indigenous grapes in Sardinia, the Karmīs the Contini Winery (in Cabras Oristano), is the wine that we recommend for this fresh and savory dish. Delicate aromas of peach and white flowers, its taste is mellow, fruity and persistent, with almond aftertaste.

Peppers stuffed with tuna and Mint

Cold pasta with fresh salmon with...

And you're always… too kind! I embrace you strong!

This looks so good. Great presentation!

Welcome to my blog and thanks!

O Gnamm….. I had in mind an unusual version of fregola, But first I think I will prepare an inspired to your! Great!!

And I will wait to see your to take inspiration! ada kisses

Gracias!I'm so happy that you like my recipe! Welcome in my blog,I agree,Kid's crativity,imagination and ingredients well balanced is the secrets of the cuisin!

What a beautiful creation! Sometimes I am still amazed of the variety of ingredients and combinations that our kitchen offers us. And when these ingredients meet the fantasy. ….

You're right! Our kitchen has an infinite possibility of combinations! Really you could eat every day of your life a different dish…you just need to have some’ fancy! A hug! ADA

This is the second recipe I see with fregola today…that desire you're making me come!!! See you soon!

We see that the fregola is calling you! And you can't not respond!!! A hug, ADA