The ragù alla Genovese, one of Neapolitan recipes (Yes, ragù alla Genovese is Naples) for me the most delicious ever. With the VIDEO RECIPE step by step. The meat sauce Genovese is easy to prepare and with very few ingredients: Meat, a flood of onion, aromas, spices and much, but so much patience because the cooking is very long, at least 5 hours. I will not dwell on the assumptions that explain why one of the symbol of Neapolitan cuisine is called 'Genovese', but the most likely hypothesis is that it was invented by the many Genoese cooks who exercised in the port of Naples. If you like, then I suggest you also try the TUNA GENOVESE, truly extraordinary.

What I do not understand is why this sweet sauce, wonderful, unique taste, It is almost impossible to find in Naples restaurants, unlike the classic 'Rau”, ie the TRADITIONAL SAUCE’ NEAPOLITAN. The meat sauce Genovese is great: The meat cooks for hours until it becomes soft, the onions turn into a kind of sweet and savory cream. I use it mainly for pasta, and frayed the meat to use it as a condiment, but the flesh of the Genoese sauce is also a great second plate.

In this very short VIDEO TUTORIAL on my YouTube channel you can also see how to make the Genoese using meat cut into pieces: a trick in case you want to shorten a little’ cooking.

My tips for a perfect sauce to Genoa

We come to suggestions: the ONIONS must be copper, and the best is the coppery onion of Montoro (Mountain), perfect for preparing the Genoese. In the alternative it is granted onion. The amount of onions will seem huge, but trust: the weight of the onions must be twice that of the flesh. Get ready to weep a lot. The MEAT: I used the lacerto, but they are fine the scamone or the real. In addition to beef, the other meat allowed is veal and cutting the so-called ‘clouds‘: I do not eat veal and beef so always and in any case.

The COOKING must be long and performed over very low heat: ragù alla Genovese must 'pippiare’ as the traditional sauce. The POT more suitable is that of COCCIO or that of GHISA, but there again curse if you use a regular pot. How flavorings, every family has its secrets: since I am not Neapolitan, I humbly chose the spices they prefer, bay leaves and black peppercorns.

Finally, the PASTA: the Neapolitans are rightly purists and therefore candles or broken ziti. That in Rome are hard to find. But the paccheri, paccheri means, i pennoni, i rigatoni. And anyway short pasta, large and strictly Gragnano IGP. I seem to have told you everything. So I recommend: prepared for the Easter lunch meat sauce Genovese and good day!

one kilogram of lacerto, chump or real beef

a stalk of celery

a few grains of black pepper

320 grams of paccheri, ziti a candle 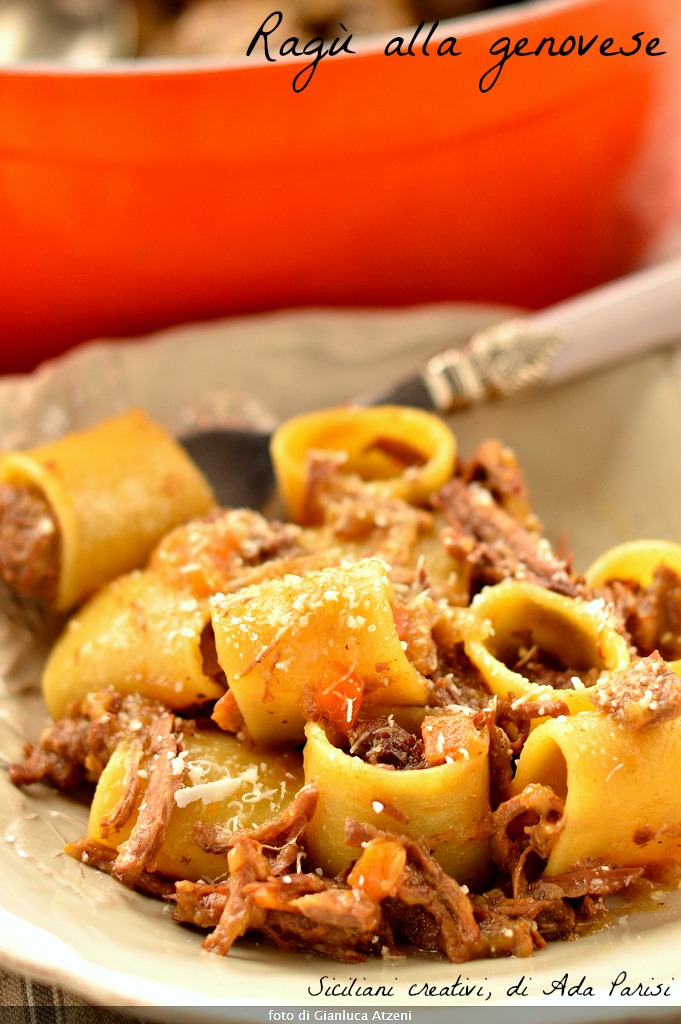 The preparation of the meat sauce Genovese is easy, look at the VIDEO RECIPE step by step. But you have to be ready to cry a lot because you will have to peel and slice two kilos of onions. So courage: peel onions, wash and finely slice.

Cut the meat into pieces rather large. The meat sauce Genovese is not a stew, considered pieces of about 150 grams each.

Peel the carrot and remove the strings from the celery. Chop the vegetables finely.

Put in an earthenware pot or cast iron abundant extra virgin olive oil, heat and brown the meat, little at a time, until it is lightly browned on both sides. Set aside the meat and add the chopped celery and carrot to the oil. Add a little salt and brown for a few minutes. Then place the meat in the pan and add the onions all. Add salt again, combine the peppercorns, a little fresh ground black pepper and bay. Add a glass of meat stock or hot water and cover.

The Genoese sauce should cook over very low heat: I bake it on the coffee fire, by using a funnel to get more even cooking. Stir occasionally, turning pieces of meat. The cooking should be long, least three hours. But the cooking time basically depend on the cut of meat and the amount of collagen that has to melt to get a soft meat, It cuts with a fork. My Genovese sauce has cooked more than five hours. Halfway through cooking taste to adjust salt if necessary.

For the dough with the Genoese, boil the pasta in salted water, drain it al dente and toss with the sauce of onions and meat. Personally servant pasta alla Genovese with grated pecorino, because the meat sauce Genovese has a sweet note very strong and tangy pecorino the balances, but it is widely conceded Parmigiano Reggiano. In the unlikely event that leftover meat, You can serve the meat to the Genoese as a second plate with a lavish and rich mashed potatoes. Bon appétit!

MATCHING: Fiano di Avellino DOCG, white wine produced by macchia dei Briganti. a small and young winery with vineyards in the hills of Irpinia, Montefalcione, in Campania. This Fiano smells of dried fruits and white flowers, the palate is dry, elegant and slightly tangy, of mediumThe genoese ragù: Neapolitan original recipe of one of the most good sauce ever. Perfect for pasta and as a second plate. body. Serve cool with this traditional Neapolitan recipe will give the best, giving a great balance to the plate.

Super delicious
Thanks
A big kiss