Pomegranate in the kitchen: Property, benefits and use

Rich in anti-oxidants and vitamin C, has a proven anti-tumor action and is also good. It's pomegranate, or rather the pomegranate, fruit of the Punica Granatum plant, Punicaceae family. The pomegranate is a fruit to which, Since antiquity, taumaturgical powers have been given for its natural properties and today it is considered a "super food" and its consumption is trendy. But how to use pomegranate in the kitchen, to take advantage of all the benefits it can offer us? First let's talk about seasonality: the fruits of pomegranate ripen in autumn, between the end of October and November.

The pomegranate origins and types

The plant pomegranate is of Asian descent and China are cultivated 110 thousand hectares, but he found in the Mediterranean shores, from Turkey to Iran up to Israel and Spain, a habitat in which to grow comfortable. Over ocean, is California to cultivate pomegranate intensively, followed by Mexico and Arizona. In Italy the pomegranate is cultivated mainly in the southern regions, Puglia, Calabria and Basilicata in the first place but also Sicily and Lazio (source Edagricole).

Most cultivated varieties are Israeli Ako and Wonderful One. However, there are varieties of Italian, from different regions. From Sicily comes the horse tooth, le Neirana (variety Messina), the Prophet Partanna (variety Trapani) and Selinunte (variety of Agrigento). From Cesena instead they get several varieties including pomegranate Beautiful Bertinoro, Furore Rosso, Dolce San Giorgio and Belgrappolo. There is also the pomegranate Florence (that collects advance, between September and October), plus cultivar not Italian but throughout the area such as the Giant of Albania, The Giant of the convent and the green Round. 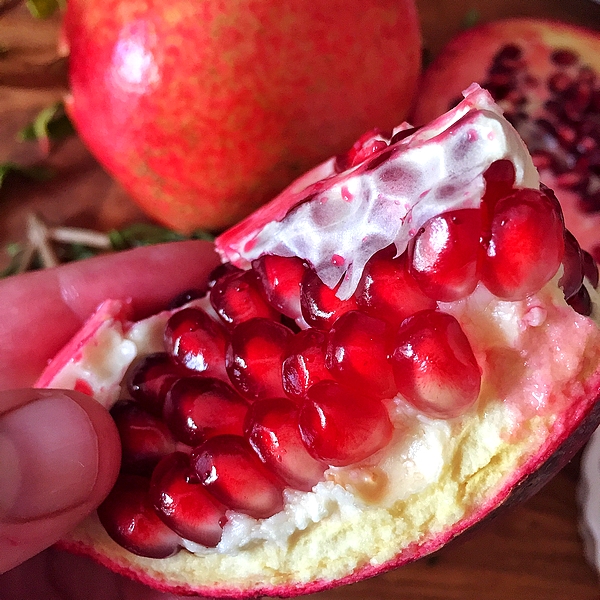 The result: the pomegranate

The pomegranate, fruit of the pomegranate, It is a rare beauty: within the berry, bright red, concealed by a highly tannic white membrane (this "CICA"), hide the "arils". The arils are woody seeds covered with a bright red pulp and translucent, almost transparent at the root. Fresh and crispy, They have a variable between the sour taste and the sweet according to the variety. The pomegranate comes from the Latin "malum granatum" or "apple with seeds", because the fruit apparently remembers an apple.

The nutritional properties of the pomegranate

The pomegranate is low in calories (about 80 calories per 100 grams). It has a high water content (78%), a fat and low in protein and sugar and then an average of carbohydrates (13,5% circa). Rich in mineral salts (potassium, zinc, copper, manganese, phosphorus, magnesium, selenium and calcium), the pomegranate fruit is an important source of vitamins of group C (in a pomegranate is 20% of the daily requirement of vitamin C), of the group B, In addition to vitamin E and vitamin K. If even this is not enough, the pomegranate is both grapes one of the richest fruits in anti oxidants, tannins and flavonoids, including ellagic acid, calligo acid and quercetin (source Fimmg). 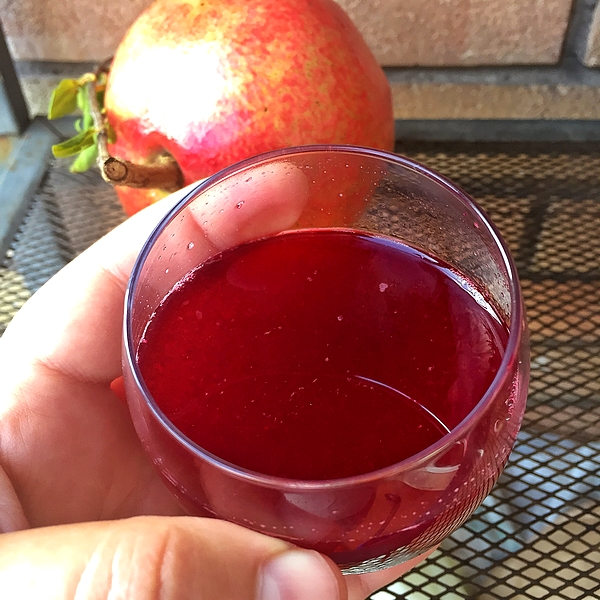 Precisely these substances make the pomegranate a powerful anti-tumor, especially with regard to prostate cancer, of the skin, breast and lung. Also known are its astringent properties in gastrointestinal level (It is useful against diarrhea) and vermifughe (tapeworm). Because the pomegranate also contains many fibers (the woody parts of the seeds), also it has beneficial effects in the intestine.

A pomegranate make a true super food, There are also its stimulating action on serotonin receptors, which makes it a mood regulator, that of regulator of blood pressure and cholesterol (It reduces the risk of atherosclerosis and supports cardiac function) and that of testosterone stimulus, thanks to which the pomegranate has been called "natural Viagra". Finally, the pomegranate juice has diuretic properties due to potassium, antiviral and antibacterial properties and is able to combat infections triggered by bacteria and parasites such as Salmonella, Escherichia coli and Staphylococcus aureus. 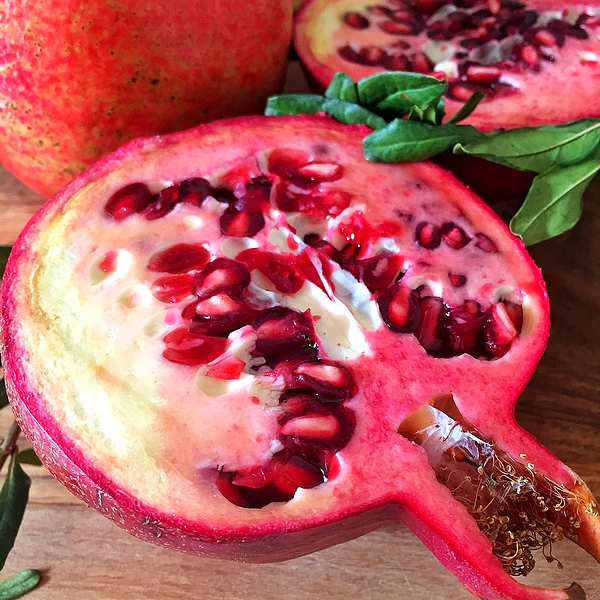 How to choose and store the pomegranate

As for the uses in the kitchen, to be able to enjoy all the beneficial properties of pomegranate, you need to consume raw fruits. Its main use is in the form of juice, to consume preferably freshly squeezed. In the bars we often find an appliance that is just to press the pomegranates, but at home you can just use a regular juicer, then filtering the juice obtained in a colander. But how to choose the perfect pomegranate to eat? First you have to choose the heaviest pomegranates, because it means they are rich in juice. The skin should be soft so that it can be scratched, and do not draw from fruits uniform deep red color, because it means they are too mature and the beans inside may already be unmade. Do you prefer red fruits but pinkish. Yet, the skin should be free of bruises and soft parts.

Remove the seeds from the pomegranate is not difficult, but be careful because the juice stain indelibly. The seeds are enclosed in a white part and strongly tannic. To extract, I suggest you cut the pomegranate in 4 parts, immersing the fruit in cold water and sgranarlo with fingers. The pomegranate should be stored in a cool, dry place, when stored in the refrigerator, can last a whole month if. As for the beans already shelled, it is good to consume immediately.

The pomegranate in the kitchen

In the kitchen, the ruby-red pomegranate immediately remembers the Christmas atmosphere. The beans can be used in delicious and elegant pasta dishes perfect for holiday menu, as the RISOTTO WITH CHAMPAGNE AND POMEGRANATE and the PAPPARDELLE WITH ARTICHOKES CREAM, MONK AND POMEGRANATE. Among the appetizers made with pomegranate, the AUBERGINE CREAM AND YOGURT, to serve with toast or buns or Flans CIME DI RAPA AND COTTAGE CHEESE WITH POMEGRANATE.

The pomegranate is able to enrich, with its sour taste and its also crunchy salads, like’CHICKEN SALAD, POMEGRANATE AND SALSA VERDE. And do not forget that with red grains of pomegranate can also decorate cakes, ice cream and puddings.

Pasta with cauliflower in red Sicilian

Made in Italy. The robiola of...