At Easter the tradition on the table 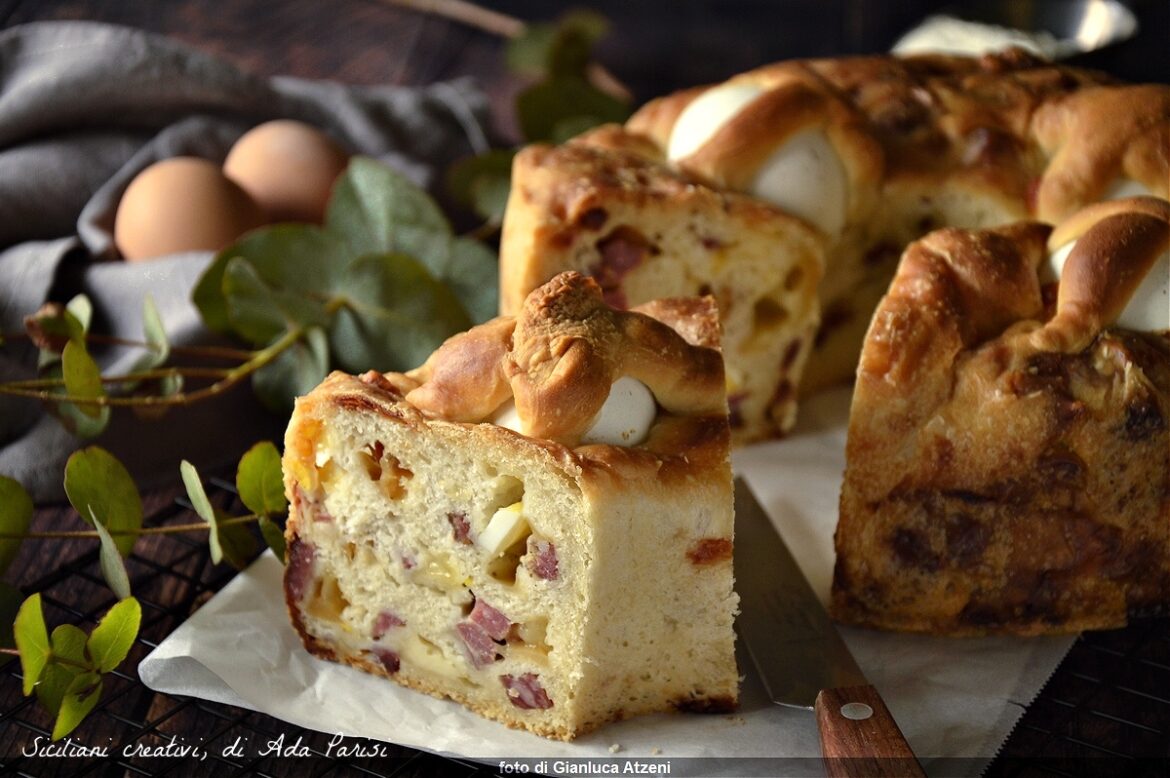 One of the Easter recipes par excellence: the Neapolitan casatiello. In essence it is a stuffed bread: but the filling is something extraordinary. Boiled eggs, cheese, mixed cold cuts trapped in a dough that smells of black pepper and lard. Is’ difficult to describe its goodness to those who have never tasted it. I know that, reading the ingredients, the fear will arise that it is a fat and heavy recipe: in fact in the mouth you do not have any unpleasant sensation of fat or grease, but that of a very pleasant softness. I think looking at this VIDEO RECIPE on my YouTube channel will make you want to try it.

The Neapolitan casatiello, together with PASTIERA NAPOLETANA, at CUDDURE MESSINESI, AI CU PUPPETS’ THE OVA and to the UMBRIAN PIZZA WITH CHEESE it is part of those unmissable Easter recipes that I try to prepare every year. To keep tradition and memory alive.

And if you have not yet found the right idea for the Easter and Easter Monday menus, or 25 April, have a look at 18 SPRING DISHES NOT TO BE MISSED AT EASTER, to TRADITIONAL EASTER APPETIZERS, at EASTER RECIPES NOT TO BE MISSED WITH ASPARAGUS. Is, for those who do not renounce tradition, here are the 10 BEST RECIPES WITH LAMB OR KID.

The word “casatiello - Wikipedia” it would derive from the Latin “caseus”, cheese, ingredient that is found in abundance within this recipe. The preparation of this extraordinary leavened product is not complicated but it is a bit’ long. The dough is that of bread, but enriched by the presence of lard (irreplaceable) and a lot of black pepper. You can use brewer's yeast, is dry is cool, but the traditional recipe involves the use of “criscito”, sourdough.

Inside a riot of salami, Ham, provolone, mozzarella cheese, boiled eggs and pecorino cheese. Is’ the richest filling I've ever made. To complete the casatiello, the eggs arranged on the dough by raw and stopped with strips of cross-shaped dough, symbol of Christ's death on the cross, of the Resurrection and therefore of Easter. Remember that casatiello must be prepared one or two days in advance and left to rest, like the pastiera. So try to resist. Among other things, given the high amount of fat, keeps soft and fresh for a long time. And now run to prepare it. Have a good day! 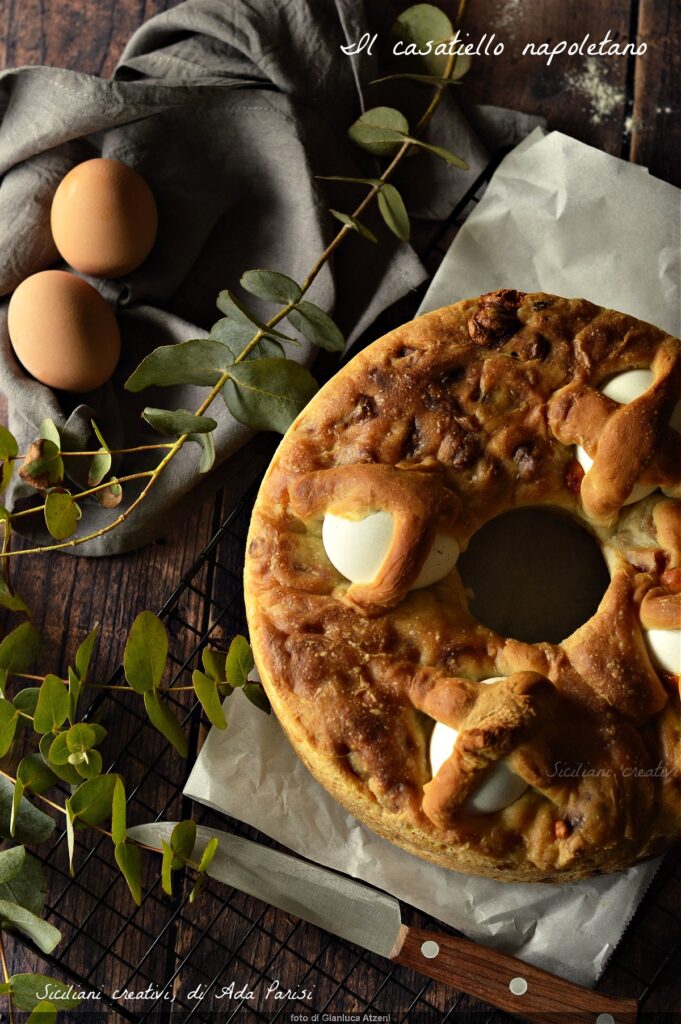 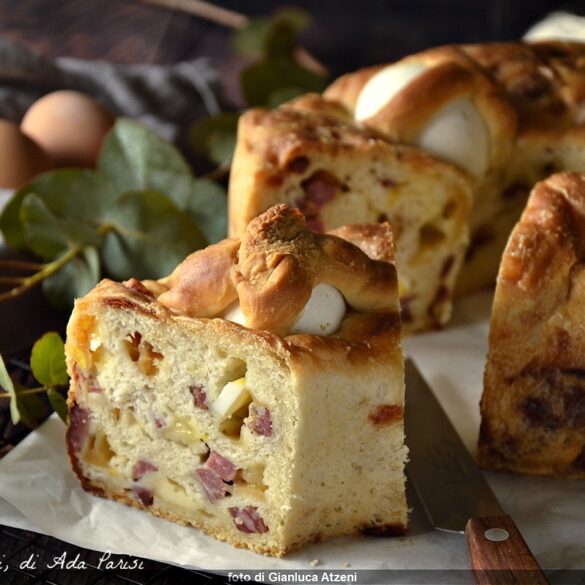 Doses for a ring mould of 26 cm in diameter

2 grams of dry brewer's yeast or 80 grams of sourdough

300 milliliters of water at room temperature 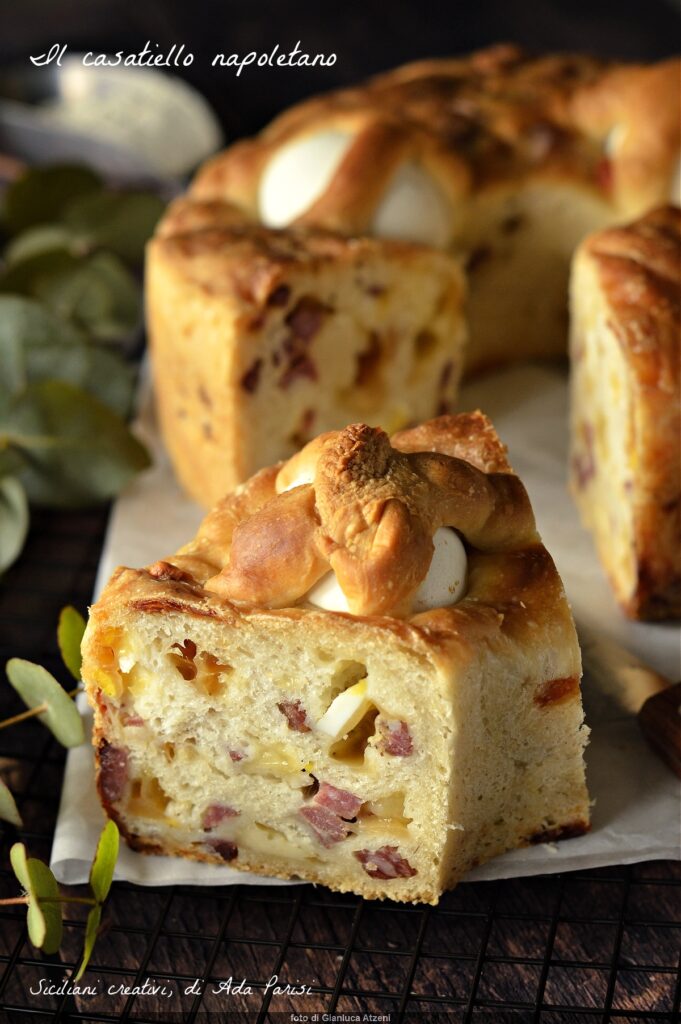 FOR THE DOUGH. The preparation of the Neapolitan casatiello begins with the dough, that you can do in the planetary or, with a little more patience, by hand. Put the sifted flour in the bowl of the mixer, the dry brewer's yeast and half the water and start kneading.

If you use the sourdough or fresh brewer's yeast, the process varies slightly: you must first dissolve the yeast in half the water at room temperature, then add the flour and start kneading, only after adding the salt.

When you have obtained kept a coarse dough, and rather dry, add the salt dissolved in the rest of the water and, when the flour has absorbed the liquid, add lard several times. I recommend, do not add lard all at once but slowly, letting the mixer work until absorbed. Work by hand or in a planetary mixer alternating low-medium speed until you get a soft but stringed dough, smooth and homogeneous.

Incorporate plenty of freshly ground black pepper at the end, then transfer the dough to the lightly floured work surface and knead it by hand for a few minutes. Form a dough with the dough, put it in a bowl lightly greased with lard and cover with plastic wrap. Store in the refrigerator overnight.

The following day bring the dough to room temperature and let rise until doubled in the oven with the light on or at a temperature not lower than 28 degrees. Leavening times depend on temperature and humidity and can vary greatly.

FILLING AND FORMING OF CASATIELLO. While the bread rises, boil the eggs, cut the scamorza cheese and provolone into small pieces and dice the salami and ham. How much the dough will be doubled, roll it out by pulling it with slightly moistened hands until it forms a rectangle, as you see in VIDEO TUTORIAL. Leave aside a small piece of dough that you will need to form the crosses over the eggs.

Spread all the ingredients on the dough: salami, the ham cut into cubes, cheeses in small pieces, coarsely chopped boiled eggs. Sprinkle with grated pecorino cheese and plenty of black pepper. Roll the dough on itself gently, forming a donut.

Grease a donut mold with a little lard and sprinkle with breadcrumbs. Gently insert the dough into the mold. Lay the raw whole eggs with the shell in four places on the surface of the casatiello, as you see in VIDEO TUTORIAL and stop them with thin cords made with the dough you have kept aside. Cover the casatiello with plastic wrap and let it rise again in the oven lit with a light or at least at 28 degrees until doubled (it will take at least 2-3 hours).

Brush the casatiello with beaten egg yolk with two tablespoons of milk. Bake in a preheated oven at 190 degrees for 10 minutes and then at 170 degrees for another 45 minutes. Remove from oven and allow to cool completely. I advise you to wait at least a day before cutting and enjoy the Neapolitan casatiello. Bon appétit!

For Easter lunch and...