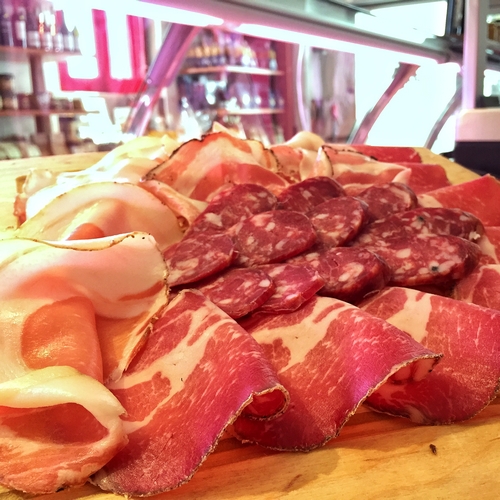 Capocollo di Martina Franca, Slow Food. You've never heard of it and, especially, you've never tasted? This particular sausage is produced by seven small businesses joined together in a Association, which protects the neck thanks to application of a strict disciplinary. To be able to understand the little touches that lie behind a production still this handicraft, I chose one of the butchers of Martina Franca, the Macelleria Romanelli, that carries on this tradition. The video you see below and you can also look on my You Tube Channel, clearly shows the craftsmanship of the whole manufacturing process, but it can't make you fully understand the care put into the preparation, as well as cannot make you breathe the scents of this cured meat and perceive the key ingredient. the time. Today, These manufacturers are working on a new product specification, prohibiting the use of any kind of preservative, making of capocollo entirely natural a salami. This is a first step in getting protected designation of origin (DOP).

Already in 1700, According to some sources, capocollo was produced in Murgia plateau, one of the few places of Puglia where historically they bred pigs. Capocollo was produced from a noble piece of the animal: the beam of the cervical muscles, worked in full, weighing between 2,5 and 4 kg, Unlike the other capocolli (as Northern Italy Cup or Loin of Center Italy). The meat is shaped and clean, then is massaged with almond shell with local wood smoked salt and grated ' fragno ', a particular oak tree found only in Murge. Is then mixed with spices and herbs of the Mediterranean: Rosa marina, Thyme, Sage, Myrtle. Then, dry the meat rests for about eight days, then again, massaged and flavored with salt and put back to sleep for another eight days or so. 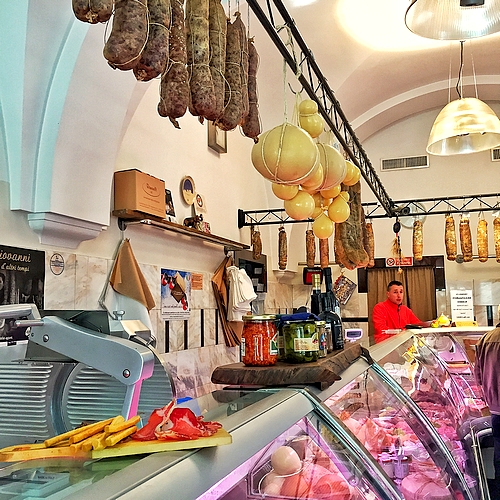 After the brine, the capocollo is done to marinate for a few hours in vin cotto, a dry white wine preparation ' Martina ' or ' Locorotondo ', with the addition of blue shark and Bianco d'alessano cooked and concentrated, flavored with herbs of the Murgia. A fundamental phase, because the vin cotto brings to capocollo that sweet and spicy note that talking is key feature.

We proceed to sack of capocollo in a natural casing, also marinated in vin cotto. With a hatpin, capocollo gets drilled lightly to remove any air bubbles. The capocollo is enveloped in a natural cotton canvas and gets tied. Tethering is the only non-manual process but mechanic run at the butcher shop Romanelli. At the end of this stage, the capocollo is hung and dried at room temperature, and in premises ventilated, for about 15 days. 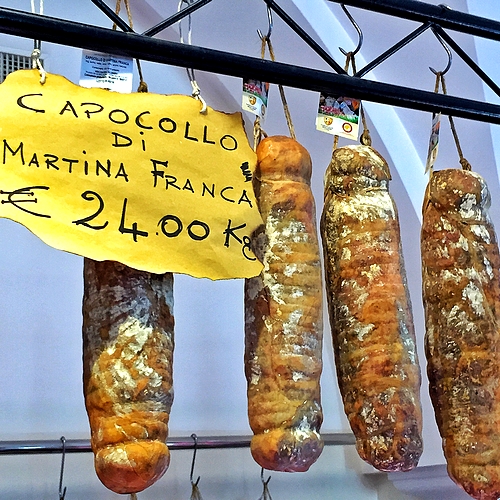 Then you get to another critical phase: the smoking, made with natural burning the same elements with which it had been smoked salt. You use, then, Macedonian oak wood, almond bark and plants of the Mediterranean. The last phase of natural drying lasts three to four months and occurs at a temperature of about 12 degrees, with a humidity of 60%. The seven companies belonging to the Association produce just two thousand pieces a year and the production area is limited to the hilly area which includes the ' Murgia dei trulli ': Martina Franca in the Centre and the municipalities of Locorotondo and Cisternino, overlooking the Itria Valley. In practice, the work center coincides with that of existence of fragno, Botanical remnant of the last ice age, present in Italy only in this part of Apulia and crucial for smoking of capocollo of Martina Franca.

Made in Italy. The art of processing...

Made in Italy. are Filindeu, the...

Anchovies and anchovies: how to cook them and...