One of the most famous desserts in the world If the cassata is the queen of the Sicilian pastry, Sicilian cannoli are definitely the king of what, in the world, It is considered one of the richest cuisines, varied and tasty ever. Inevitable on Sundays, at Christmas, at Easter and on every possible and imaginable holiday. Finally I also shot the VIDEO RECIPE STEP BY STEP so here's the recipe for this cake that is also included among the Pat, the traditional food products of Sicily Region. And on my Instagram profile you will find a short 30-second net video in which I celebrate the poetry of Sicilian cannoli.

The variants of the Sicilian cannoli

How many Sicilian recipes, by Sicilian arancini the Cassata, through buns, Rice pancakes, pasta alla Norma, Also cannoli undergo numerous local variations: the sweet (that the story wants to be born in Caltanissetta during the Arab domination) It is traditionally composed of a zest and a cream of ricotta, but really the variations are endless. The rind (scorcia or scuoccia in Sicilian) It is a fried wafer and can be more or less dark, depending on whether there is contained cocoa powder or coffee or less. In Messina, For example,, the rind is very clear, because it is made without cocoa or coffee and I will leave just the recipe Messina zest.

Here you will find the VIDEO RECIPE STEP BY STEP to prepare perfect Sicilian cannoli. It is essential to lard, the wine MARSALA and a little’ by vinegar of wine: all three serve to form in cooking those bubbles that make the rind of the cannoli so crumbly and light. In addition to Marsala, or instead of Marsala, often adds a little’ of white wine in the dough, which must be compact and elastic. After a rest, the dough is then stretched thin, we are talking about millimeters, wrapped in the reeds (a real time river reeds, today stainless steel rods) and fried, once in lard, Today you can also use peanut oil.

The filling is based on SHEEP'S COTTAGE CHEESE (some use the ricotta cheese when that sheep is not available) and sugar: the cream cheese can be enriched with pieces of candied (orange or pumpkin) or with a little’ cinnamon (I do not put), although now there are cannoli filled with chocolate cream, Pistachio, custard. The exterior of the cannoli, that originally were preparing for Carnival, It is garnished with powdered sugar on the peel and candied orange or cherries or hazelnuts, chopped pistachios or dark chocolate flakes on cottage cheese.

FUNDAMENTAL stuff the cannoli with ricotta cream only ready to serve, otherwise the moisture of the ricotta make springs zest: for years are all the rage so-called 'Travel cannoli', with brushed rind with dark chocolate inside to protect it from moisture ricotta. If you have to travel you have no choice, but if you prepare them even do not try this at home: the taste of Sicilian cannoli is completely altered from that of chocolate. I recommend, if you prepare them for Carnival take a look at all my CARNIVAL RECIPES, and have a good day! 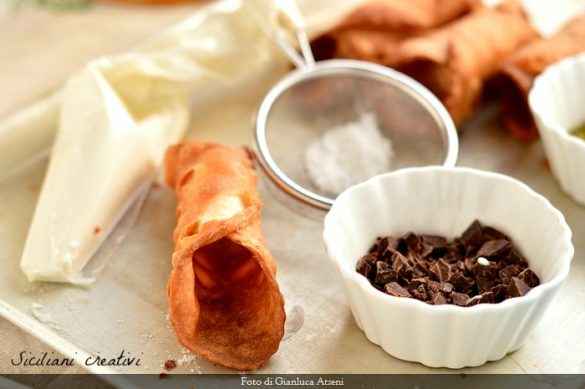 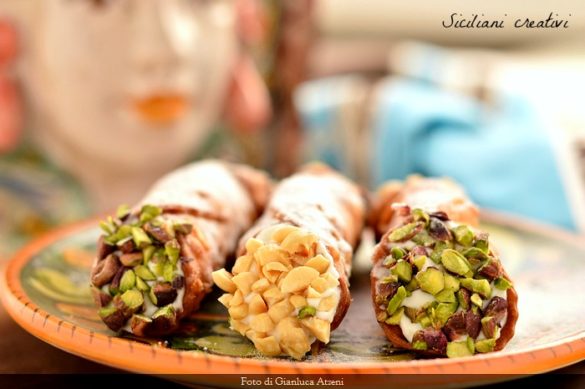 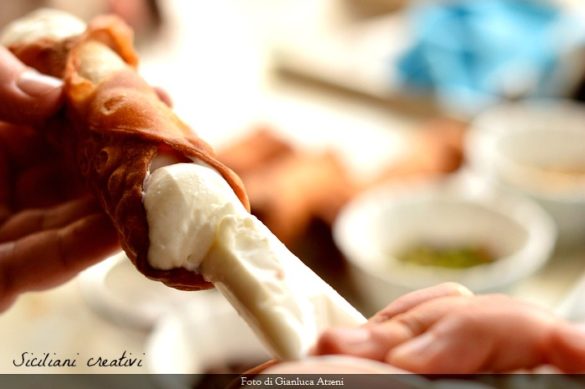 a teaspoon of vinegar

grated rind of one lemon organic

peanut oil, or lard, for frying, to taste

lard to grease the steel rods, to taste

little egg white to seal the rind of the cannoli

FOR THE STUFFING:
1 kilo of ricotta cheese

TO DECORATE:
hazelnuts or pistachios, to taste 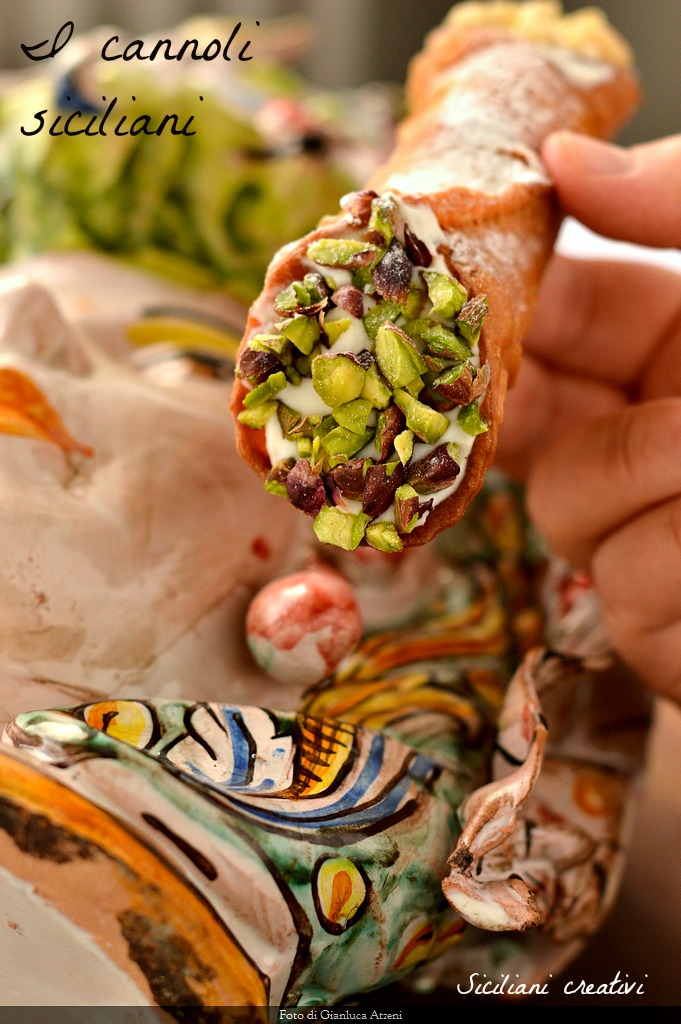 Before preparing cannoli look carefully VIDEO RECIPE STEP BY STEP I made for you. I recommend, if the cottage cheese was too watery, i suggest you let her drain in a colander for a couple of hours in the refrigerator. Then, the ricotta with a spatula and add sugar. If the ricotta is the right one, creamy, You will not need to sift because it easily reduce cream. If, however, you saw lumps, then you'll have to sift the ricotta with a fine meshed strainer to obtain a velvety cream. Cover the cream cheese (which if you want you can add a pinch of cinnamon and a few finely chopped candied) with food film and store in the refrigerator until it is used.

For the zest of Sicilian cannoli: pour the flour on the work surface, sugar, Salt, the yolks and lard. Mix with your fingertips until the mixture is blasted mixture composed of crumbs. Add the Marsala with the wine vinegar and grated lemon zest. Continue to knead for a long time, until you have a smooth dough, compact, homogeneous, as you see in VIDEO RECIPE STEP BY STEP. Wrap the dough for the zest of Sicilian cannoli in plastic wrap and let stand in the refrigerator for two hours.

After resting in a refrigerator, you will see that the dough will have become elastic and smooth. At this point, take a small part of the dough and spread it with the rolling pin (or with the sheeter) to a thickness of 2 mm at the most. The sheet must be stretched very thin otherwise it will not form bubbles in cooking and, swelling, It will become too thick. Grease of lard barrels. Place the barrel on the pastry and, with a wheel, draw an oval of about 10-12 centimeters in diameter (as you see in VIDEO RECIPE ). Brush a little egg white on one end of the dough, then overlap the flaps so that the one without the albumen rests on the steel barrel. Pressing slightly overlapped edges so that the cannoli in cooking do not open. I suggest not to prepare cannoli and then fry, but to fry them as you prepare them because if the pasta waiting dries, the bubbles will not grow properly.

Fry the cannoli in peanut seed oil at 165-170 degrees (use the indispensable kitchen thermometer): you will see that the bubbles will immediately form, as in VIDEO RECIPE. When the cannoli are golden (it will take a few seconds), turn them over and then remove them from the oil using a perforated ladle. Drain the excess oil zest and place on the absorbent paper. When they have cooled peel, remove the canes making a slight twist: this is a delicate phase, because if the peels are done well, They are fragile and very light, so excessive pressure may break. Remember to grease the rods again with lard before preparing new peel.

Stuff the cannoli with ricotta cream, using a pocket bag without tip, a moment before bringing the cannoli in table (I bring everything i need to the table, both the ricotta and the various seals, farcisco cannoli, I garnish them and serve them to my guests, I assure you that they will rarely forget the experience), sprinkle the zest of Sicilian cannoli with icing sugar, then garnish the cream cheese as Favorite: chopped nuts, candied fruit or chocolate chips. Bon appétit!

How wonderful !!!…Thanks Ada.
a greeting from alessandro :)

Practically perfect. How like me. Santa do you. Immediately.

I butterebbero out of heaven in five minutes. But thanks ❤️

I love them are sweet favorite
Thanks
A big kiss

On this you are in good company! One kiss, ADA