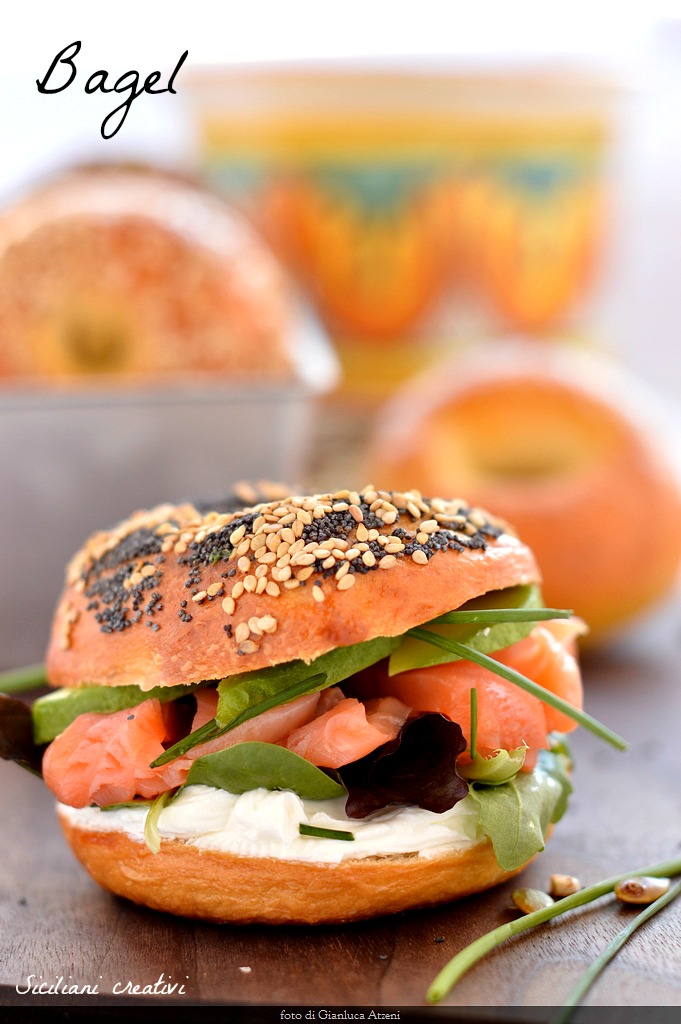 Today, the original recipe of bagels. A recipe delicous, Although to try them touches you knead a little: the bagels are soft rolls and covered with various seeds, become famous for being one of the favorite foods by New Yorkers. Actually originated in Northern Europe, and in particular of Poland: were Polish Jews emigrated to Usa to carry and then spread these sandwiches that have been adopted successfully in all United States. On my youTube channel you will also find a VIDEO TUTORIAL ON FORMING AND BOILING BAGEL.

How to stuff the bagel

. Of course you eat stuffed and the classical filling, the same recipe I, is the one with cream cheese (the ' soft cheese’ which in fact corresponds to our Robiola or Philadelphia), smoked salmon, avocado. I also added a little’ of fresh salad and a few strands of chives. Clearly set: I tried also with ham and mozzarella, capocollo di Agnone and caciocavallo, Prosciutto and taleggio. Let us look at the bagel.

My tips for the perfect bagel

I prepared with dried Brewer's yeast, but I am posting even doses with fresh yeast. Is’ the dough is very very simple to make and are not long proving times times: I make mature the dough in the fridge for at least 12 hours, But if you want you can proceed with the leavening at room temperature, and then restrict the times about 2 hours in total. The fundamental step in the recipe of bagels is boiling, as with the pretzels or taralli pugliesi: BREW times determine the thickness of the crust of the bagel, I testify of a total of 40 seconds, to have a thin crust and a soft crumb and dense.

You can sprinkle with Sesame, poppy seeds, sunflower oil, pumpkin, or coarse salt. Will be great. Obviously bagels are best when eaten freshly made. But if you already cooked frozen, thaw them in the refrigerator and let stand for a few minutes in the oven at 100 degrees return fragrant. 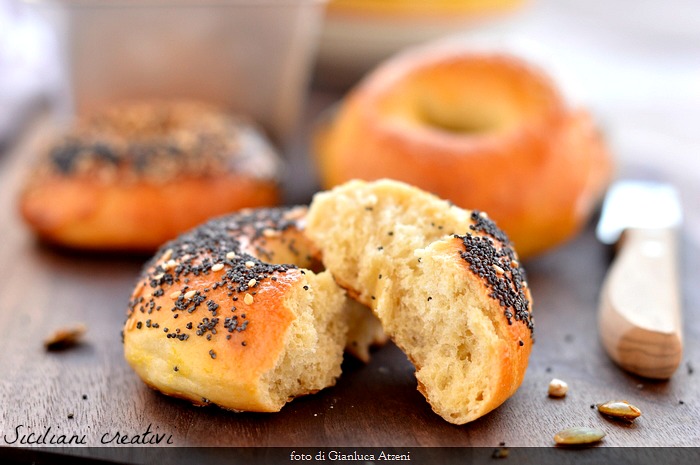 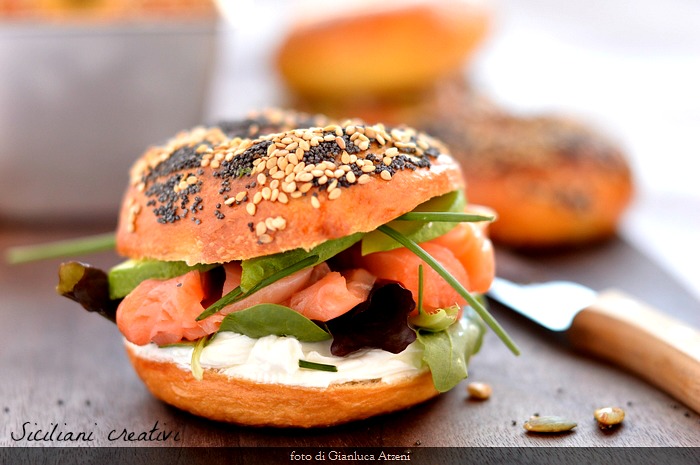 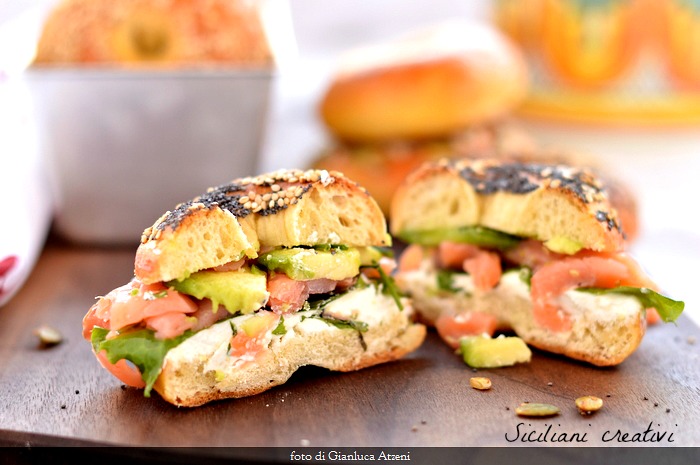 50 grams of butter at room temperature

one egg yolk and a little 'milk for brushing bagels 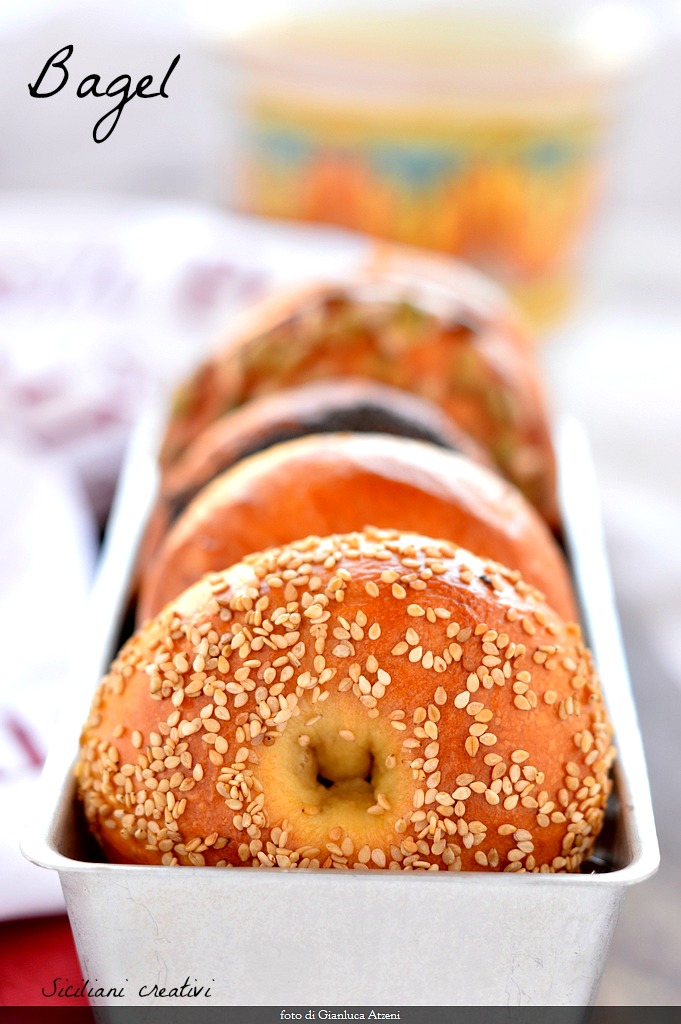 Before you start preparing bagels, look at my VIDEO TUTORIAL ON FORMING AND BOILING BAGEL. First you have to sift the flours and pour them into the bowl of the kneading machine. Heat as soon as the milk (must be warm, absolutely not warm) and dissolve the yeast (is dry is cool, nothing changes). Pour the liquid into the kneading machine and knead for a minute, so that it is absorbed: you don't have to get a, Okay even if part of the flour is not wet. Let it sit for 15 minutes.

After this time, Add two whole eggs, the diced butter, honey and salt. Knead with the kneaders until you obtain a homogeneous mixture, then transfer it onto lightly greased work surface of extra virgin olive oil and knead by hand until a glossy dough, smooth and homogeneous, that comes off perfectly by the work plan. Put the dough in a bowl (always oiled) and cover with plastic wrap (or with a shower Cap, of course new, I'm telling you the absolute best method).

At this point, you have two alternatives: or let the bagel dough rise for an hour and proceed immediately to make your own bagels, or you do mature for 12-15 hours in the fridge: I would recommend that you follow the second path. Slowing rising due to cold, the dough has time to mature: gluten softens, bagel once formed will be lighter and, Once cooked, easier to digest. In any case, or immediately after kneaded or after maturity, the dough should rise until double at room temperature (best if around 26-27 degrees). 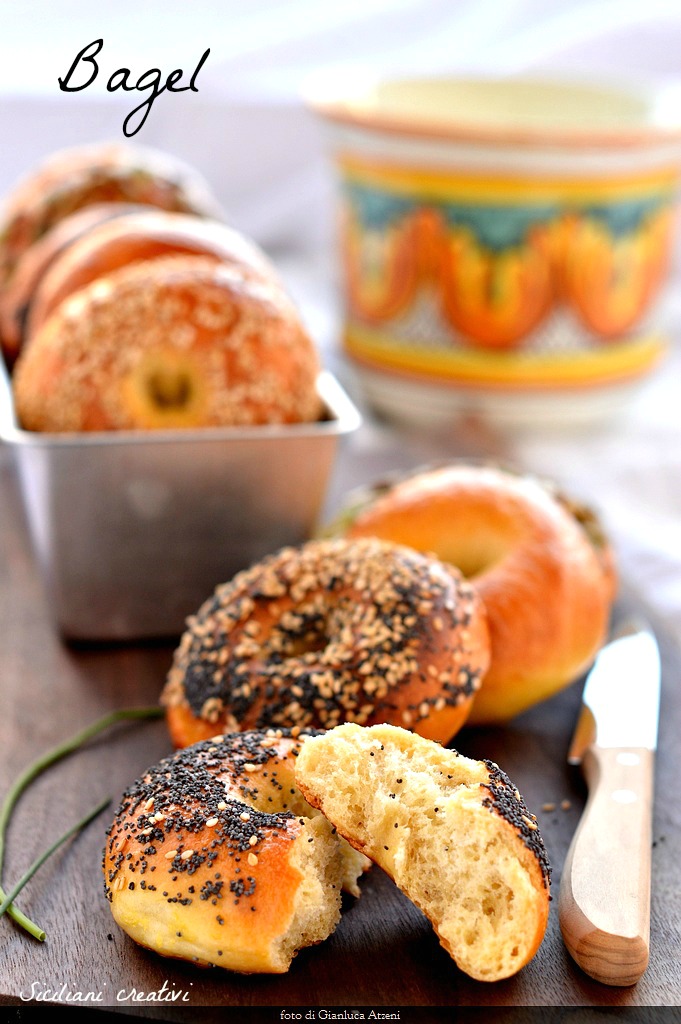 Because the dough has doubled in volume, put it on the floured work surface and divide it into equal parts 18-20. Roll up each piece until you have a ball, crush it slightly with the palms of your hands and put all the pieces of dough to rise on a cloth sprinkled with flour and covered with a cotton cloth dampened.

When the balls are doubled again in volume (about 30 minutes), make a hole in the center of each ball: I just do it with your fingers as you can see in my VIDEO TUTORIAL ON FORMING AND BOILING BAGEL. Try to make a large hole about 2 centimeters in diameter, because then they will tend to close again. Put the Donuts back onto the cloth to rise for 10-15 minutes.

While the bagels rise, bring the water to a boil with the rest of the ingredients (If you don't have glucose doubled the amount of sugar). When the water boils, Dip the bagels (a few at a time) and cook stirring occasionally for about 40-50 seconds, as I do in VIDEO TUTORIAL ON FORMING AND BOILING BAGEL. Boiling gels the starch present in the flour and create a crust that will more or less thick depending on cooking time: don't go past the minute. Drain well bagels and place them on a baking sheet lined with parchment paper.

Mix the egg yolk with milk and uniformly coat the surface of the bagel, then sprinkle with seeds that you prefer. Cover with a cloth and leave to rise again 10 minutes.

Preheat oven to 190 degrees and bake the bagels for 20 minutes or until they are golden. Allow to cool. Once cooked you can also freeze them. Cannoli as Favorites: the classic New Yorker's cream cheese, salmon and avocado, but bagels are also delicious italian-language, with mortadella, salami or ham. Bon appétit!

Crackers with oregano and Maldon salt (with...

Cheese cake without baking, with blackberries...