Have you ever tried eggless potato dumplings? They are soft, delicious and perfect for egg protein intolerants and those following a vegan recipe. Dumplings are one of my favorite stress recipes, and they are one of the symbols of Italian cuisine. As you know, of dumplings there are so many, not only potatoes (with or without eggs) : there are the REGROUND SEMOLA DUMPLINGS, those RICOTTA, those of water and flour. On Instagram you can take a look at the quick recipe in 30 seconds.

Making potato dumplings without eggs is risky, I admit: you only have one way to get a perfect result. Finding suitable potatoes: they have to be floury, so that they can replace with their starch the binder that is normally offered by the egg. The taste, though, it is great: because they really only know about potatoes, and remain soft and fluffy. The recipe shows the doses for 5 people: don't be surprised if you talk about over a kilo of dumplings, because they're heavy and make little and the average dose is about 250 grams per person. Are also low in calories compared to a traditional pasta, with just 150 calories per 100 grams.

Remember that potatoes peel while they are still boiling, otherwise they become hard and crush them will make it difficult for you. You can freeze them, putting them first on a tray in the freezer and then, when they are frozen, putting them in a well-closed frost bag, and keep them for up to a month. There is no need to thaw them before cooking them, you can dive them directly into boiling, slightly salty water. As you know, the dumplings are ready after 2 minutes that rise to the surface. On the seasoning of potato dumplings without eggs you can have fun: butter and Sage, tomato, but also sauces based on vegetables or fish, like the GNOCCHI WITH PALAMITA SAUCE AND PUMPKIN. For example, try the GORGONZOLA PUMPKIN DUMPLINGS or those CACIO AND PEPPER WITH BEANS. Have a good day! 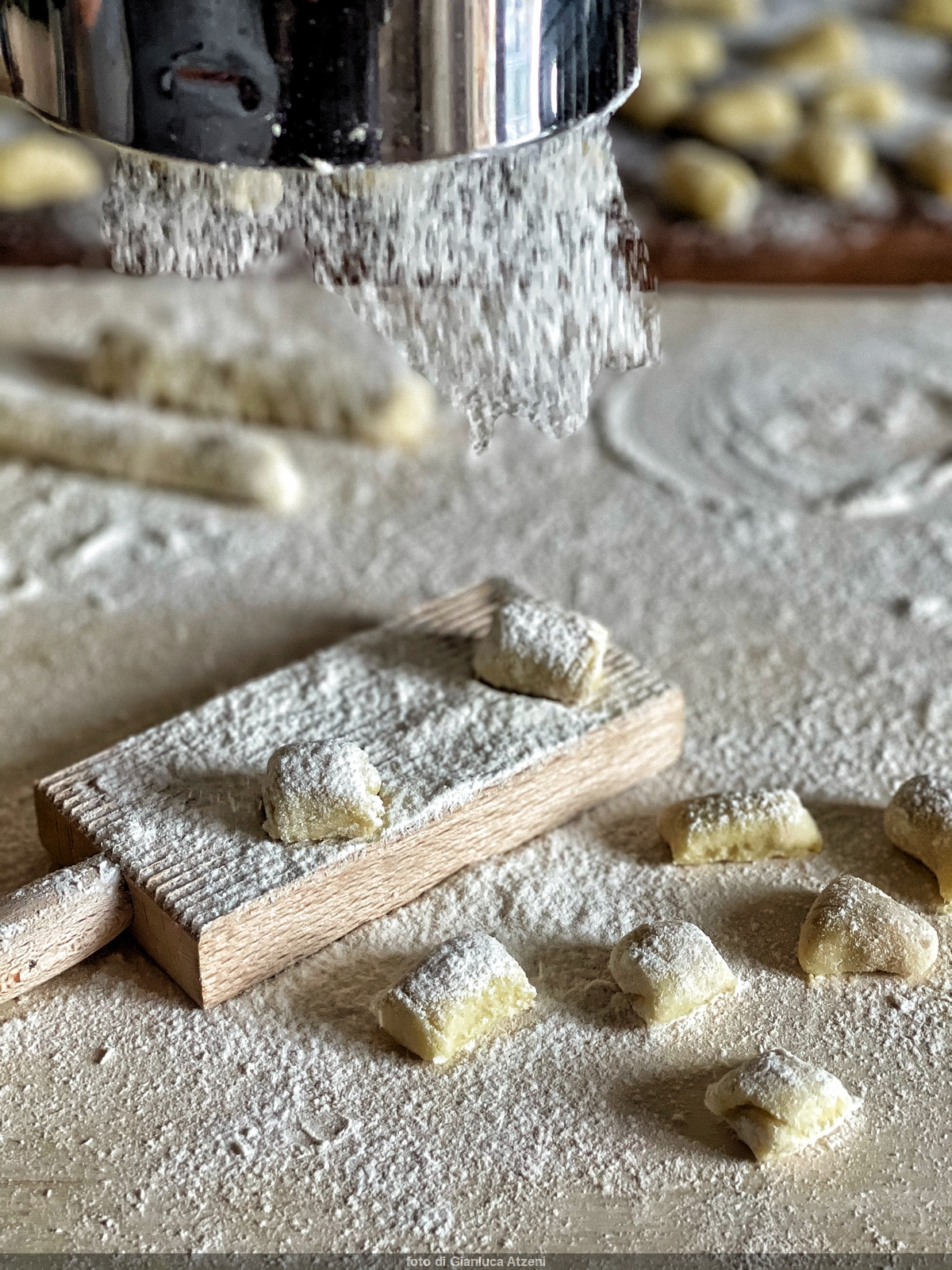 DOSE 1,5 KG OF DUMPLINGS:
1 kilo of floury potatoes
300 grams of flour 00
nutmeg, to taste
salt and pepper, to taste

Potato dumplings are very simple to prepare. First you have to cook the potatoes. I suggest you cook, with Peel, steamed. This way the potatoes will not soak with water and you will not have to add too much flour in the dumplings.

When the potatoes are cooked (stick a fork in the center, will have to enter easily), peel them while they are still hot and crush them with a potato crusher. Don't let them cool down, otherwise they will become hard and crush them will be difficult, strenuous and lumpy result.

Put the obtained potato puree on the work top and add the flour and salt. If you like, you can also add black pepper and a pinch of nutmeg. Or some grated lemon zest. Knead while the potatoes are still warm, to obtain a homogeneous mixture, a bit sticky but firm.

The amount of flour must be sufficient to obtain a dough that is soft in the mouth, but during cooking it does not melt. Once the dough has been prepared, you can cover it with food film and let it rest for about 30 minutes so that it becomes firmer. If it seems too wet to you, adding another 50 grams of flour: as I told you, much depends on the quality of the potatoes.

Cut pieces of dough and, on a slightly floured plane, derive elongated cylinders about one and a half to two centimeters in diameter. Cut the cylinders into pieces of about 2 centimeters. If you want to make the classic 'stripes' you can roll them on a fork or on the appropriate tool to make dumplings. Boil potato dumplings without eggs in plenty of salted water: saranno pronti uno o due minuti dopo essere saliti a galla. I recommend: once cooked the dumplings go "Caught" con una schiumarola e adagiati nel sugo o direttamente nel piatto, e non messi in uno scolapasta: sono delicatissimi. Bon appétit!

Risotto with borage and gorgonzola Dop

Fried eggs with asparagus and rosti...