Fregula saffron risotto made in chicken broth and Rosemary 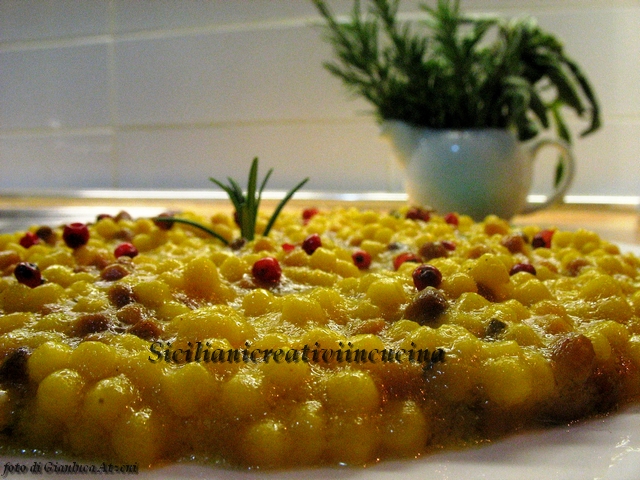 Sardinian fregula but cooked as risotto, in a real chicken broth flavored with saffron, Rosemary and red pepper. The fregula has as its characteristic to have a peculiar aroma, very intense grain and sells part of this aroma to dishes. Baked in a nice chicken stock and saffron becomes irresistible Golden. for that, When you make the stew, double the dose of water during cooking: the broth you can freeze, We will always keep in the freezer ready to be used as background or for a nice risotto. Of course don't forget to stir the pot with lots of Parmesan cheese….

For the recipe of chicken soup, If you haven't already in the freezer portion of that put forward by chicken soup and fresh vegetables, Click on this link. For fregula risottata: put the oil in a large saucepan and Brown the chopped onion, Saute until the onion becomes transparent by adding, If necessary, little hot water. Join the fregula and let it toast for two minutes stirring constantly. Add the chopped Rosemary to dust and then, floor plan, the broth.

The procedure is the same as the risotto: therefore absorb the liquid before you pour the other. If the broth is already salty so you don't have to add salt, but the rule is ' try always and often '. When the fregula is cooked and creamy, add the butter and stir in a generous helping of grated Parmesan. Decorate the plate with pink pepper and a sprig of Rosemary.

THE PAIRING: we suggest – to remain on the territory – a white wine of Sardinia, produced by Wineries Saddle & Moscow. The Torbato brut, with its hints of fruit, yeast and bread crust goes well with this dish, because it combines the ability to degrease the palate (Thanks to a very fine perlage) with toasted notes, always very persistent, the fregola sarda. A beautiful wedding.

Hi Ada :) Here I am! But how good you are?! I'm speechless, my compliments! From today I follow you here with immense pleasure :) I'm glad I met you, I embrace you strong! :**

Hi Valentina!!! A great big hug, If understood in Rome I recommend, you're already booked by me at dinner!! PS. you maybe take the cake!