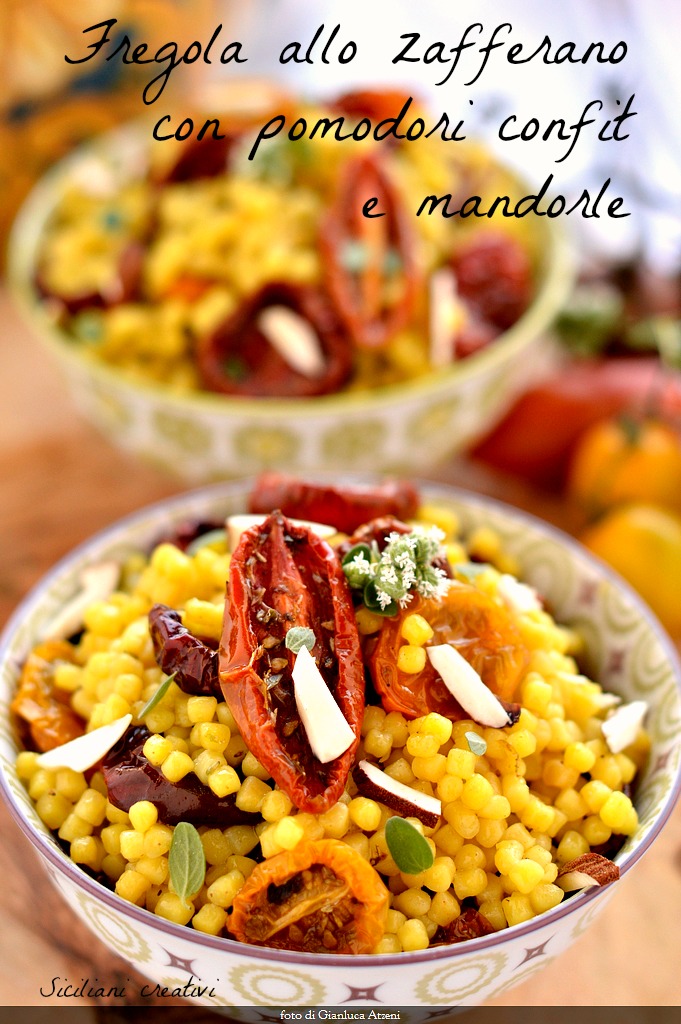 Saffron fregula salad with confit tomatoes and almonds. A simple vegan recipe, Mediterranea, vegetarian and coloured, with very few ingredients, where everything is played on colors and on the taste of the different types of tomatoes. Obviously l’fregula salad serves cold.

Is’ a kind of pasta salad a little’ different from the usual, that I often do because I like this Sardinian pasta very much and I find it a good alternative to rice or cereals, especially in summer dishes. Here I gave to Sardinian fregula (many in Italian they call ' fregola ') a taste and a bolder color through the use of Saffron. If you don't know what’it's the fregula take a look at the Video preparation of Sardinian fregula, shot in a beautiful bakery in Settimo San Pietro, in Sardegna.

Tomatoes, what types to use

But the real difference, in this recipe, make tomatoes: more types you will use, This dish will be tasty. Each tomato has its own characteristics. There are the Yellow corbarini which are very sweet (I've used even to make a with mozzarella). The camone that have an accentuated flavor, the cherry tomatoes with a marked and unmistakable taste, the tomatoes soft and sweet. In short, more varieties of tomatoes you will use more this salad of fregula is good.

Very few other ingredients: extra virgin olive oil, fresh herbs (the kind you prefer, I used thyme and Marjoram) and toasted almonds. Deliberately I used almonds with the outer fur, for a more intense and interesting.

Obviously, you can add to the fregula salad with saffron and tomato confit lots of other ingredients, to make it even more complete dish: cubes of feta cheese or primo sale, Ventresca of tuna in oil, some black olive. If you love Sardinian cuisine, have a look at all my SARDINIAN RECIPES, from seadas to macaroons and my RECIPES WITH SARDINIAN FREGULA. Now I wish you good day and leave you to your creativity. 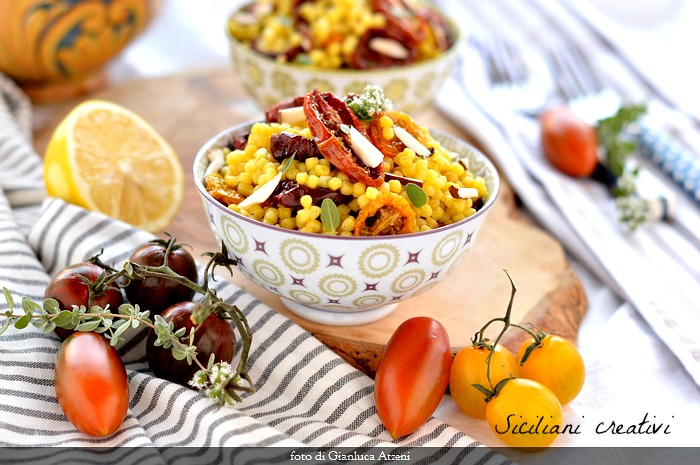 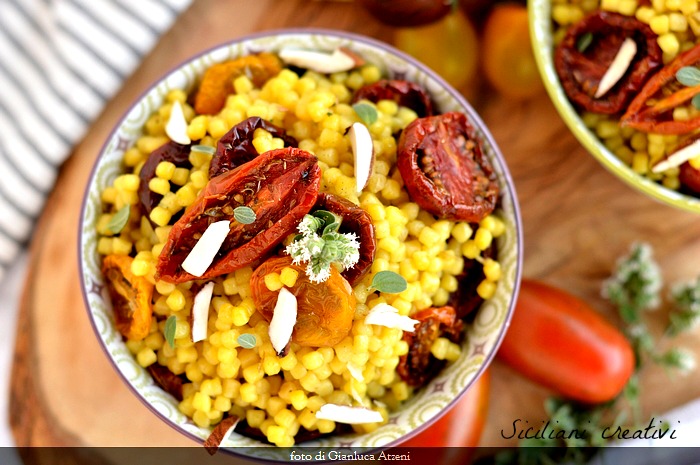 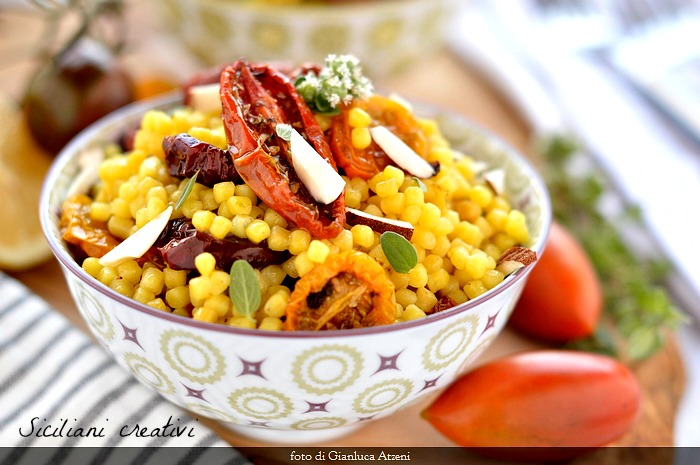 some pistils of Saffron (I used that of Navelli)

fresh thyme and Marjoram, to taste

almonds, not roasted, to taste

the zest and a little organic lemon juice 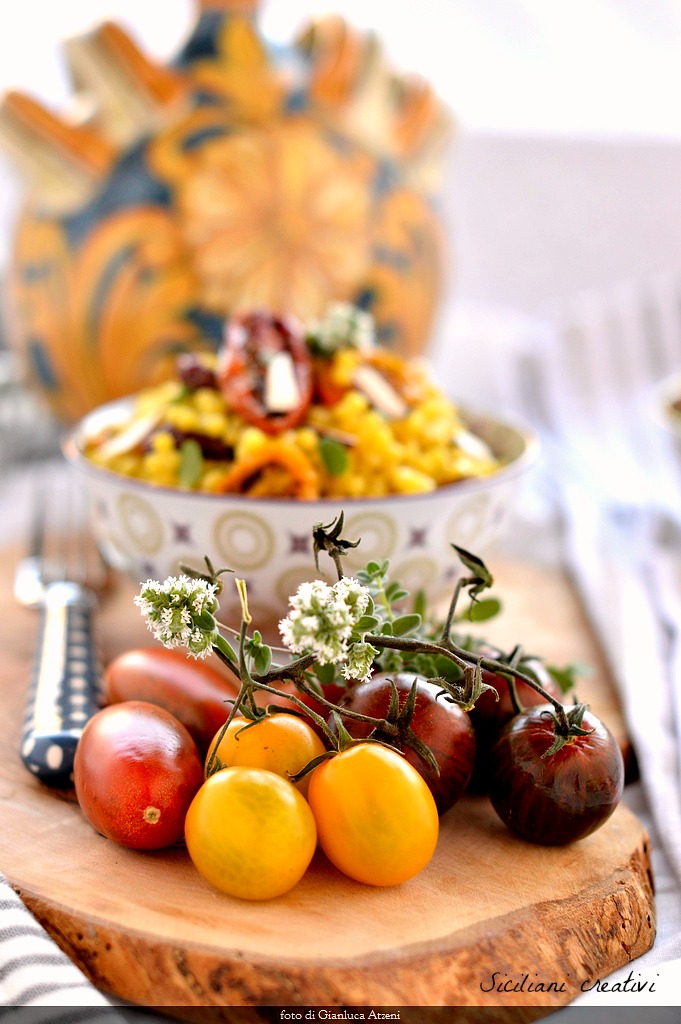 For tomato confit follow this VIDEORECIPE , season the tomatoes with thyme, Marjoram, salt and sugar. Dry the tomatoes at 100 degrees for a couple of hours: you only care about using tomatoes of different types and colors, not just for aesthetics but also a matter of taste. The yellow corbarini, For example,, they're very sweet, the Green Cadillac savoury biscuits, the tomatoes slightly acidic. Like this, your salad will taste different nursery in every bite.

Boiling salted water, to which you will have combined the pistils (or half a bag) of Saffron. Boil the fregula and drain it al dente. Put it in a bowl and season with olive oil, the lemon zest and a few drops of lemon juice, a few sprigs of thyme and Marjoram and black pepper. Once the spawning will be slightly cooled, Add the tomato confit.

Cover with food film and let the fregula rest with confit tomatoes for a couple of hours, so that it soaks up. You can leave it at room temperature, If you plan to eat it within two hours, otherwise I recommend you store it in the refrigerator for at least 30 minutes before her temper to taste it.

Before serving the fregula with tomato confit, Sprinkle with coarsely chopped almonds (I use those in their skins because they have a stronger taste and particular), drizzle with extra virgin olive oil, a little fresh ground black pepper and decorate with a little fresh herbs. Bon appétit!

MATCHING: The Strait of Messina is the wine we chose to accompany this dish. "Houses White" is a white wine, savory, with intense aromas of fresh fruit, with tropical notes, and is produced with Zibibbo grapes harvested generally in late August, which wort is partly fermented and matured in barrique. Produces the Seal Jelmar La Fauci, It has vineyards in front of Capo Peloro. In this recipe, Saffron, tomatoes, almonds, the toasted flavor of the fregola gives a complexity that this wine, just as complex and nuanced (between the savory and sweet) able to support and accompany to perfection.

Risotto cake with cherries at Alkermes