Made in Italy. Cheese from Sardinia: Pecorino di Osilo 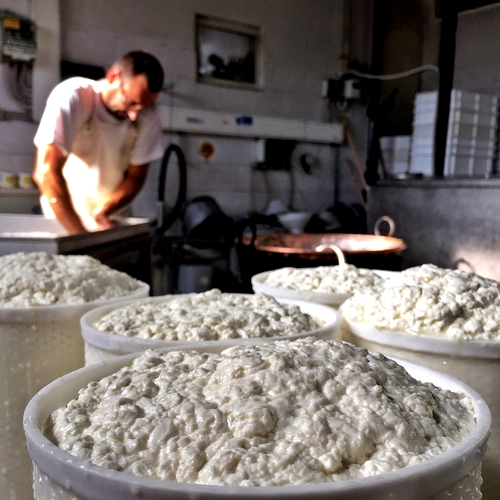 Pecorino di Osilo is one of the most distinctive cheeses pastoral tradition of Sardinia. A sheep's raw milk cheese, produced in five countries of the province of Sassari: Osilo, Ploaghe, Nulvi, Codrongianos and Tergu. The name Sardinia is “Carol fattu in fogu” (cheese made by fire). Is’ the classic Shepherd's cheese, handcrafted in sheepfolds or in homes of the pastors themselves, using tinned copper boilers that turned the milk from two milkings separated: the evening and morning, by cooking the curd, After the break up, up to a temperature of 46 degrees, to give it more strength and flavor. To learn more about this traditional food product of Sardinia (Pat) We went straight to Osilo, in one of the seven companies that produces, to turn our video: the farm “Truvunittu“. Managed by Gavino Pulinas and Giuliano Pulinas (father and son) This small family business, with five hundred Sardinian breed sheep, can work 120,000 litres of milk every year, to get doggy style, fresh ricotta cheese and salted ricotta cheese (smoked salt). Every morning at sunrise, to work the milk for cheese is Giuliano, 36 years old: the gestures are automatic, but not without passion. There is the ability of those who now knows his work, of those who know that to make cheese not only milk and rennet, but those hands who know temperatures and textures in some sort of tactile memory.

THE PRODUCT SPECIFICATION – Pecorino di Osilo is done using identical methods and coded for at least a century, following a specification which has been written down by the Slow food Foundation, that made it a garrison agribusiness. Materials and equipment allowed to produce pecorino di Osilo are different: tinned copper boilers, dairy table on, wooden chiova (in Sardinian: “mòriga”), tinplate and plastic molds, cotton sheeting, flax or synthetic fibre, mechanical press, cassone stewing. 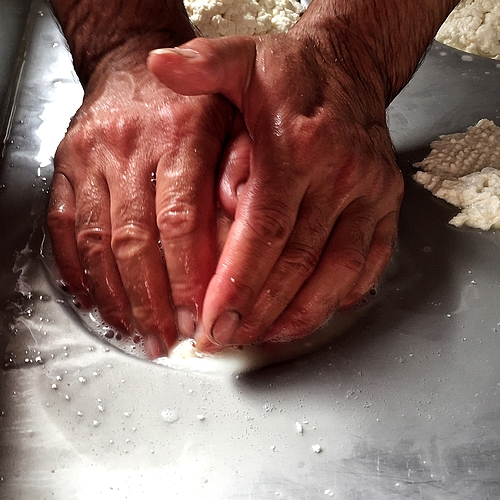 The cattle are grazing, except in the hottest months of summer when the sheep are fed with corn flour, and soybean hulls, dried hay, beans and barley: and in this summer 2017, particularly hot and arid, even the sheep have suffered. The company Truvunittu is one of the few to produce the cheese throughout the year, contrary to what makes the majority of breeders, which give the milk to other large dairies except in August, When the animals are left at rest (dry period). 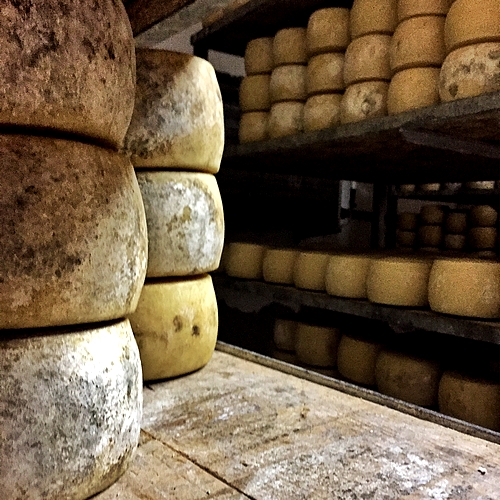 DOUBLE FIRING – To make a pound of cheese pecorino di Osilo it takes seven liters of milk. The milk is collected the night before, refrigerated at 4 degrees centigrade and together with that collected the next morning. Tinned copper boilers shall be paid from about 240 litres: copper has the advantage of being a material that conducts heat quickly and evenly, and also to lose heat very quickly. The boiler (who in the company Truvunittu has over a century of life) It is heated with a flame gas powered, Although at one time it was used the wood. The milk is brought to a temperature of 35 degrees, you add calf rennet, mixes, turns off the fire and expects mass cooling and the formation of curd, It takes around 30 minutes. Afterwards, the pastor break the curd using first spin and then the metal wooden chiova (the “mòriga”), until the tiny granules. The fire is lit a second time to bring the cheese mass at a temperature between 43 and 46 degrees. Sometimes breaking the curd is done simultaneously with the cooking stage. Following a rest period (stock) approximately 20 minutes. At that point, the pastor brings out of the bottom of the boiler the curd and deposited on the dairy table on to drain the whey. From this serum you get two other products: fresh ricotta cheese, soft, oily and intense flavor and delicate at the same time, and salted ricotta cheese, that is wrapped in special sheets, crushed in wooden molds and, Finally, smoked. Its color is amber, you eat fresh or lightly seasoned. Is’ a delight to watch the ricotta made in fascelle, and small Golden puddles that remain in the cauldron amid small soft mounds of cheese. 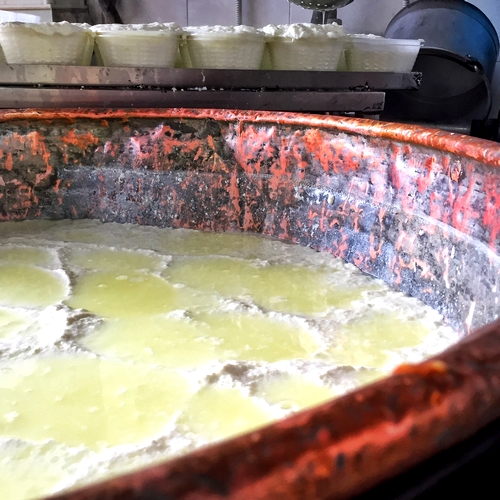 FORMING – The curd of Pecorino di Osilo is picked up and placed on plastic cylindrical molds, that are pressed with hands. Following a rest period in moulds, in which shapes are subjected to pressing for approximately five hours. Alternatively, the specification provides stewing in a chest for 4-5 hours at 38 degrees. This treatment in hot room allows the whey to go out more easily and reduces the risk of swelling and cracks in the crust. Afterwards, the cheese is dried at room temperature for about six hours and made to stand at 15 degrees temperature over night. The next day, the shapes are removed from the moulds and are soaked in brine for 24 hours, time they are turned once after the first 12 hours, by adding a little’ of salt on the surface that emerges from the water. 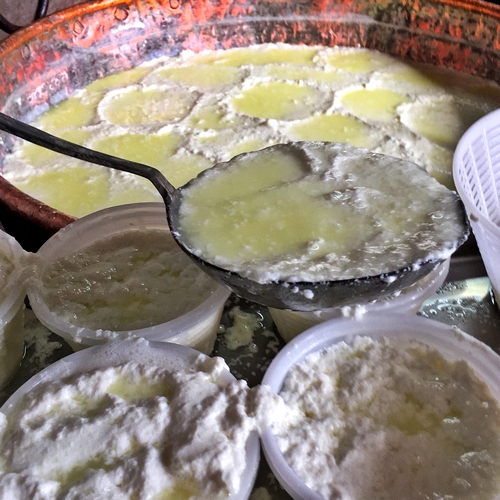 THE SEASONING – Follows the stage of maturation of Pecorino di Osilo, where the cheese is turned every day by hand, washed with water and brine to the surface, and sprinkled with a mixture of oil and vinegar to prevent the proliferation of molds. The minimum aging is 25 days for the pecorino from roast, by 30-40 days to table a fresh pecorino, of 70 days for cheese, more than 120 days for a seasoned. Initially the forms weigh around two kg, but after seasoning the weight drops to 1,7 kg. 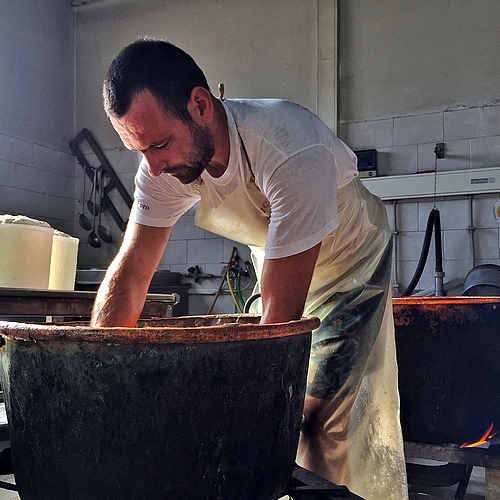 AROMA AND TASTE – The crust of Pecorino di Osilo is thin, light straw yellow in short cheese seasoning. In the case of hard cheese is tough, big, Unctuous, tending to Brown. Unlike Pecorino Sardo Dop, Pecorino di Osilo is smaller and higher. In addition, pressing that undergoes allows the Pecorino di Osilo have a softness more pronounced compared to Pecorino Sardo Dop. The aromas and perfumes of Pecorino di Osilo range from wood with herbs; the palate is soft, fudge, with notes of hazelnut. With the long maturation can be spicy. As explained by Julian Pulinas, the peculiarity of the cheese of Osilo is given by land and grass which they nourish the sheep. Osilo holds a primacy: in the entire Mediterranean basin, is the country higher (650 metres above sea level, with a Summit at 780 metres) and at the same time closer to the sea. The soils in this area are high in salt but the weather is typically mountainous. A special microclimate that allows the Pecorino di Osilo have a taste unlike any other cheeses of this type. 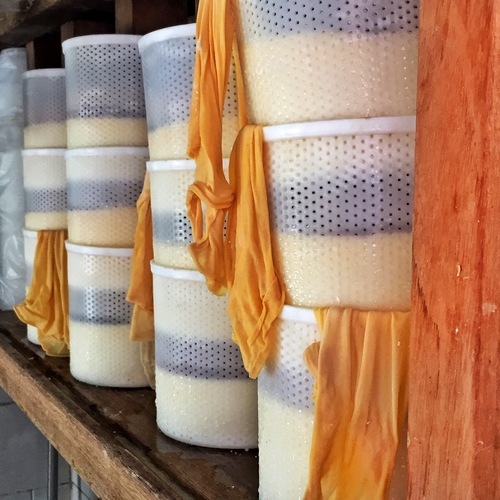 Made in Italy. Messina and the...