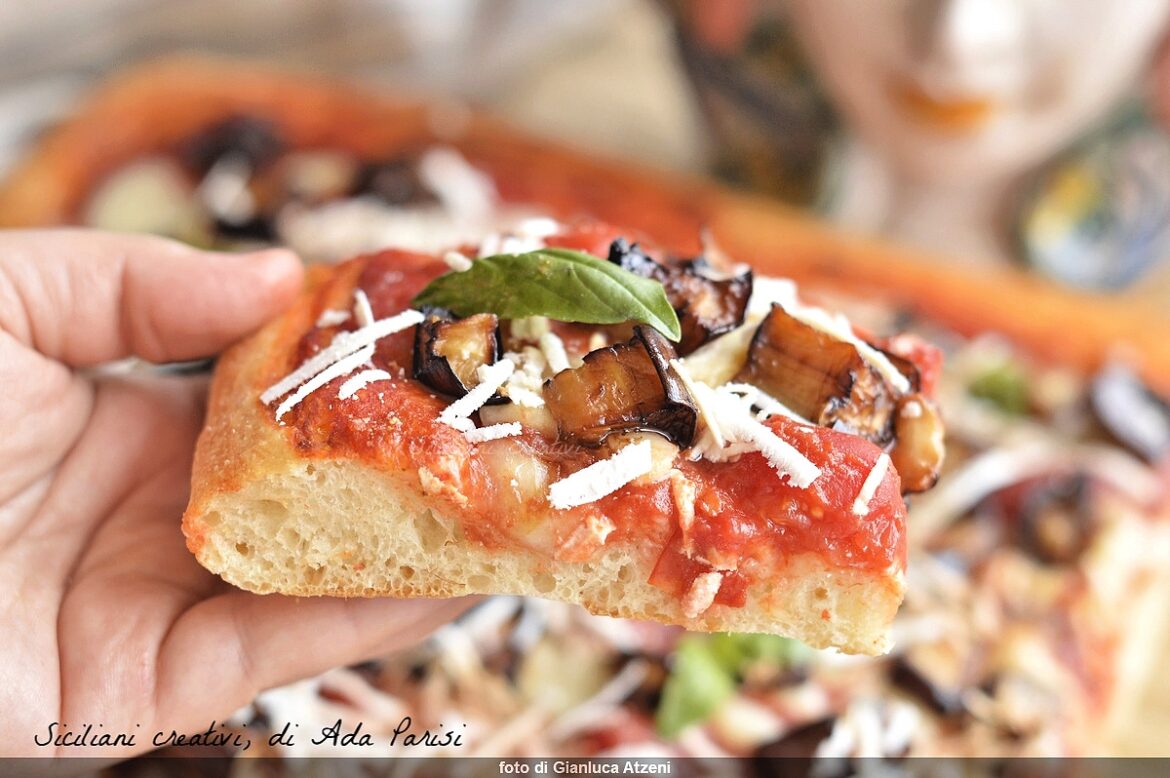 What could be richer, greedy, flavorful and Sicilian of a wonderful PASTA WITH STANDARD? Try the Norma focaccia and then you'll tell me. A light dough made from hard wheat semoth and double-zero flour, little yeast, crispy at the base, soft and well-received inside. Seasoned with traditional Catalonia sauce made with tomato sauce, fried eggplant, salted ricotta and fresh basil. Is, Obviously, a high-quality milk mozzarella. The aubergines, in September, they're still in season but for a short time. Then, you really have to hurry if you want to try this recipe.

Always, For me, Norma focaccia was the focaccia of the summer, the one to eat with friends along with a fresh beer listening to the sound of the waves. Norma focaccia is one of the most popular and traditional products of Sicilian rotisserie, together with Focaccia MESSINESE, AI calmly, to ARANCINI. Is, Obviously, along with all the rustics prepared with the’SICILIAN DIAL DOUGH.

The Norma focaccia: what flours and how to cut aubergines

For the base of the cake (the basic recipe is that of my HOME-MADE PIZZA ON THE TRAY) I used the rhyme seed of hard wheat and the double zero flour. The hard wheat semola, which in Sicily is mainly used to make bread and pasta, gives the dough a more interesting taste and texture. In particular, if it's a semola of ancient Sicilian grains scented like wheat “perciasacchi” or wheat “russello”.

As for the Eggplant, I chose to cut them into pretty big pieces, so that it enhances its taste. Obviously, I fried the aubergines in extra virgin olive oil. I reduced the tomato purée on the heat by adding salt, basil and extra virgin olive oil, to get a similar sauce, in taste, traditional standard.

As for salted ricotta, which is essential to recreate the taste of real pasta at The Standard, if you don't find it you can use baked ricotta (in full Mexican style). Or, if you don't find either, grated parmesan or pecorino cheese. You'll get a focaccia more like Parmesan and less like the Norma, but it will be equally good.

How to spread the flatbread? The video tutorial

Using 4 grams of dry beer yeast on 500 grams of flour you can make both a day leavening and a ripening in the refrigerator overnight. For dayning, kneading around 9 o's you'll have the focaccia ready for dinner, as long as you leave the dough at a temperature of about 27-28 degrees (in summer at room temperature, in winter oven with light on). If you want to make a longer leavening, more than 24 hours, you can use two grams of dry beer yeast for 500 grams of flour. For the drafting of the focaccia at the Norma I refer you to this short VIDEO TUTORIAL on my Instagram profile, but you'll see that it's very simple to perform. Now I'll leave you, fall in love with this focaccia and let me know. Have a good day. 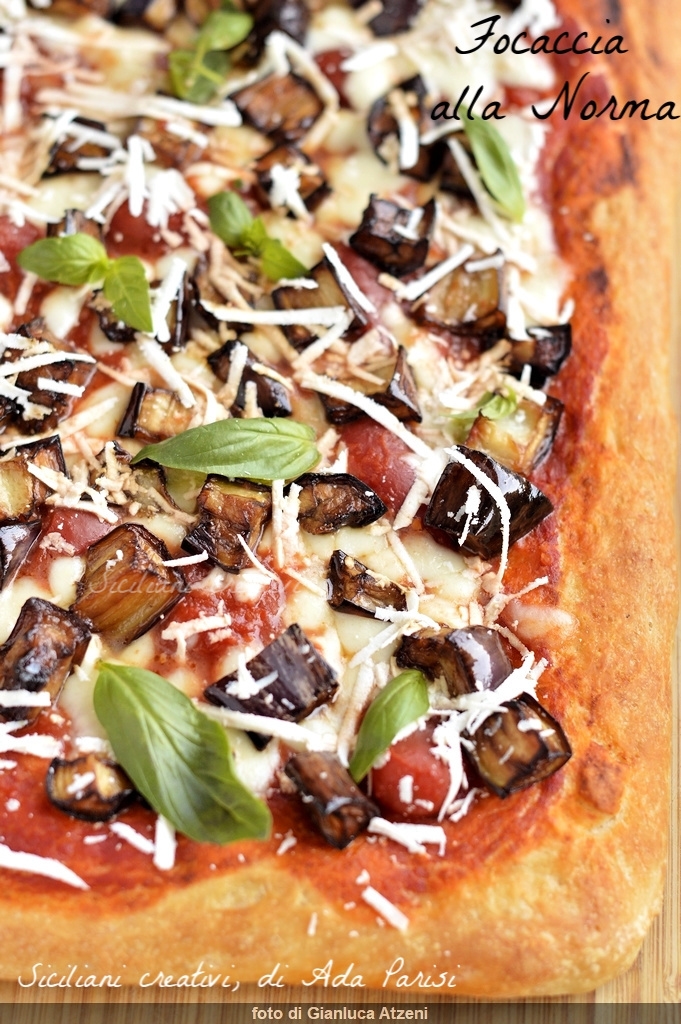 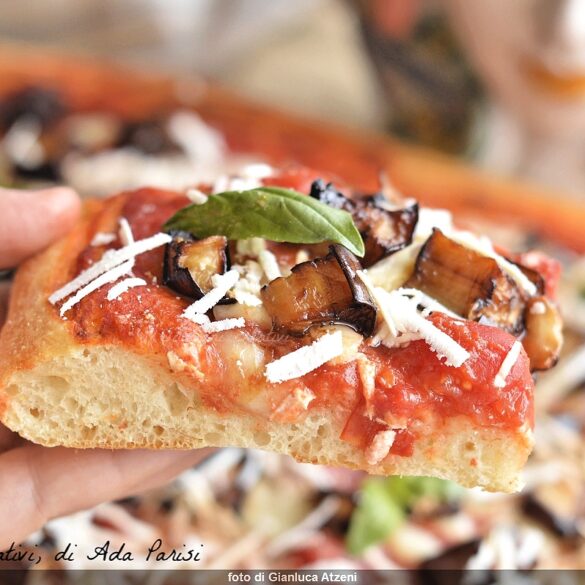 FOCACCIA TO THE NORM 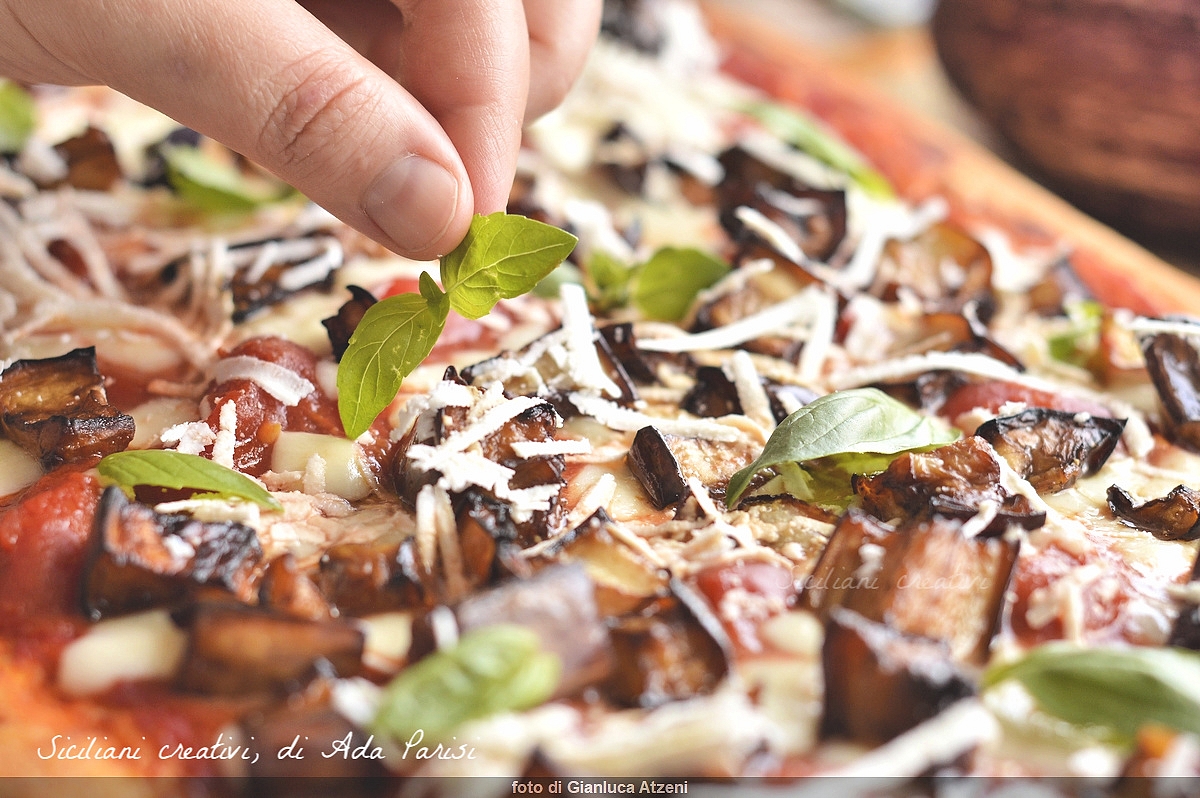 Sift the flour and put it in a bowl. Add the water and the dry brewer's yeast. Mix with a wooden spoon, making circular movements, until you get a coarse dough. Add the salt and extra virgin olive oil. Knead by hand for about 5 minutes, until you get a homogeneous and consistent compound. On the worktop lightly floured, round the dough, cover with food film. Leave to rest for ten minutes.

WITH SOURDOUGH OR FRESH BREWER'S YEAST

Both types of yeast must be dissolved in a little water before being inserted into the dough. Then proceed with the recipe as described above.

After ten minutes of rest of the dough, form an oval-shaped loaf and put in a plastic container. Cover with contact food film, so that it doesn't pass the air. At this point, you can choose the path of the long rise, I recommend, leaving the dough in the refrigerator, at a temperature of 4 degrees for at least 12 hours. Or, you can let the dough rise directly in the day, at room temperature (preferably between 27 and 28 degrees) until it doubles in volume. If you choose this route, when the dough is doubled in volume, proceed with the drafting as described below.

If you chose the long leavening, after at least 12 hours you must remove the focaccia container from the refrigerator and leave the dough at room temperature (22-25 degrees) for two hours, inside the container. 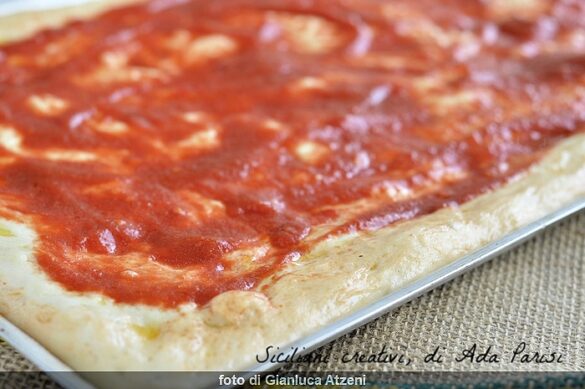 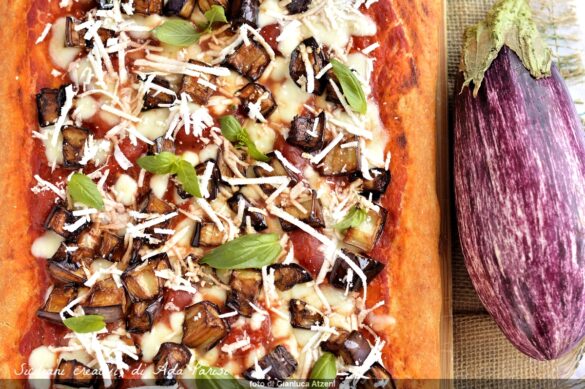 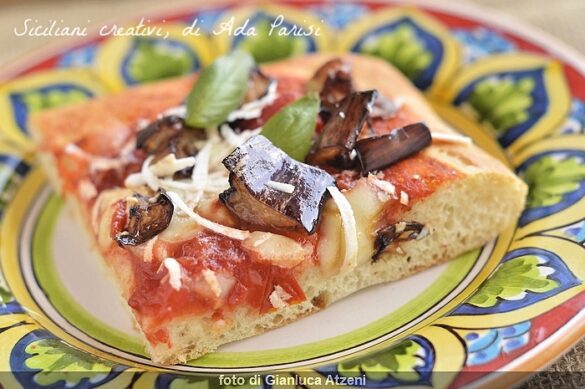 THE SEASONING OF THE FOCACCIA TO THE NORM

Prepare the seasoning for the focaccia to the Norma: cook the tomato sauce with salt, extra virgin olive oil and fresh basil until the sauce is slightly narrowed, so you get a more strong taste and similar to the seasoning of pasta at The Standard. You can also add a clove of garlic, for a more intense scent.

Wash the eggplants, remove the ends and cut them into slices about 3 centimeters thick. Then, cut the aubergines into strips and then make cubes. During frying, the cubes become dehydrated and smaller. Add salt to the aubergines and fry them in extra virgin olive oil until golden brown. Remove the aubergines from the oil and put them on a sheet of absorbent paper, with a little black pepper and fresh basil.

Slice the milk flower, put it in a schoolboy so that it loses some of its government liquid. I suggest you gently squeeze the slices of milk flower, to prevent them from release too much water on the flatbread. Grate the salted ricotta. 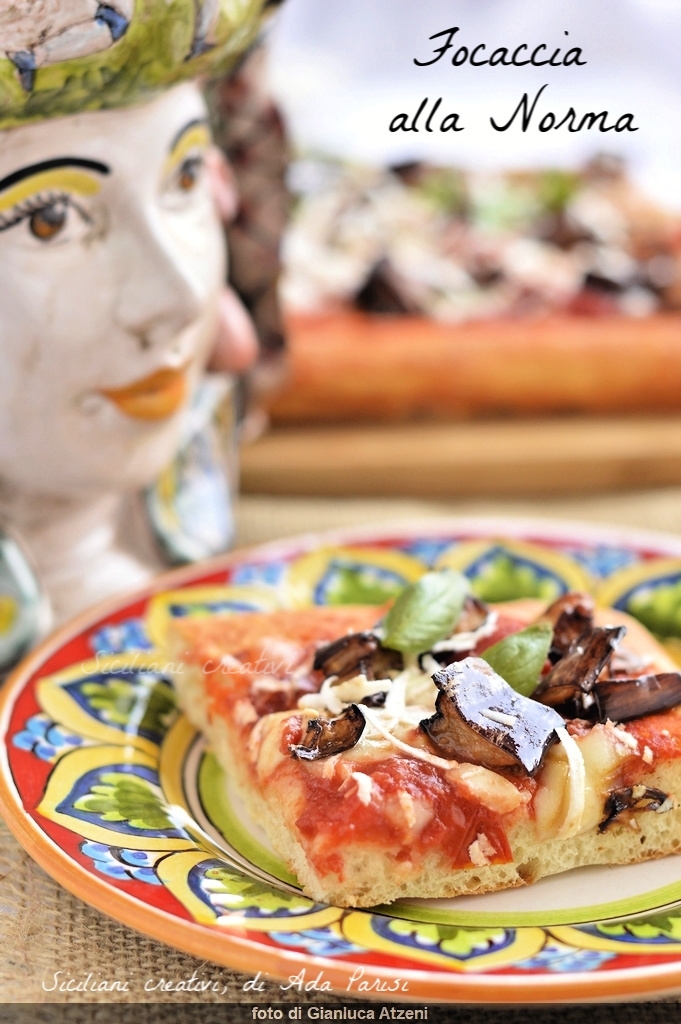 DRAFTING AND COOKING THE FOCACCIA TO THE NORM

Sprinkle the worktop with flour. Flip the dough over the worktop. Spread the dough gently, using the fingertips until it gives it a rectangular shape, great when the baking tray. Take one oven tray the size of 30 centimeters by 40 centimeters per side (30x40 cm). Grease the baking tray with extra virgin olive oil and gently deposit the dough in the baking tray, widening its sides so that they coincide with the edges. Cover the focaccia with the tomato sauce you have prepared before. With a brush soaked in water, moisten the edges of the dough. Let the dough rise at room temperature until the volume doubles. The advice is to let him rest an hour at a temperature between 27 and 30 degrees. You can put in the oven and turn on the light for the leavening.

Rabbit with red wine with le...