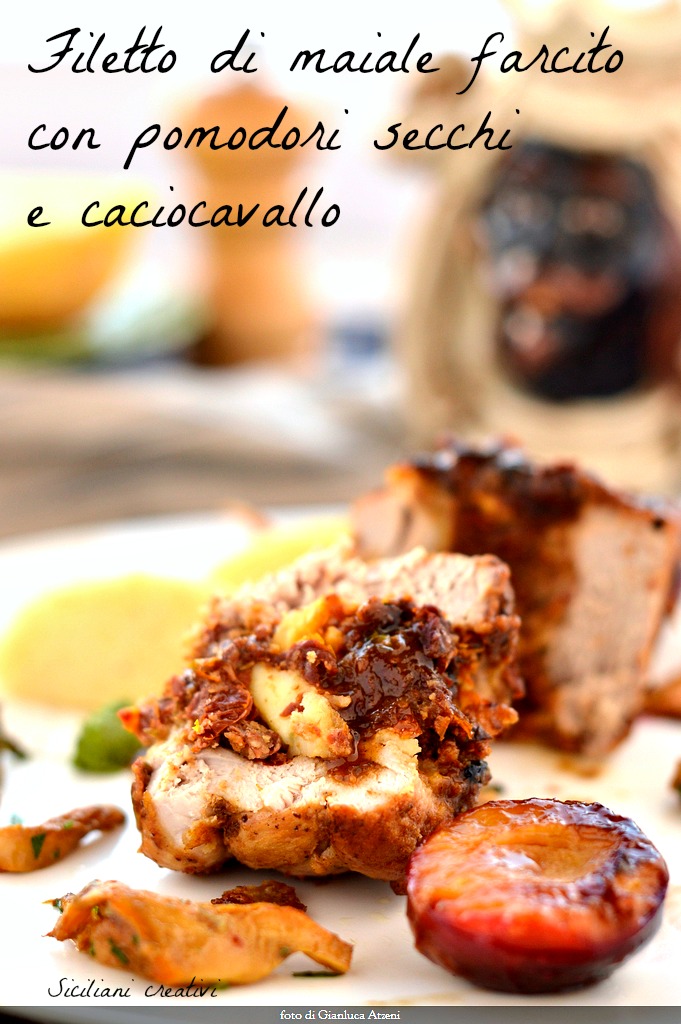 Sicilian stuffed pork tenderloin, with cheese and dried tomatoes. Today a Sicilian-inspired dish, who cooked my grandmother and I ate after so long in #8217; #8217; cottages on & & Etna Winery Baron of Villagrande, prepared by the young chef Wayne Cannon. Is’ a fairly simple dish, which can be done a day in advance, then cook it a few hours before serving, but elegant and choreography, intense and fruity: the tenderloin is stuffed with chopped Sun-dried tomatoes, Caciocavallo and capers, then browned and baked in a pan, served with sauce, creamy and rich. In short, a greedy and rich dish, like all Sicilian dishes (have a look all of my SICILIAN RECIPES to find many other ideas).

You can accompany the stuffed pork tenderloin with a side dish of your choice: I had a dinner a little’ formal and so I wanted to abound and I chose mashed potatoes, porcini mushrooms and sautéed chanterelles and some late plums grilled.. If you want to make little effort and stay in tradition, in Sicily the pork (usually a black piglet dei Nebrodi) is often accompanied by simple baked potatoes, crispy and Golden or only with a soft and rich mashed potatoes.

The taste of this stuffed pork tenderloin is very decided and recommended for those who love meat and dishes rich and intense: If you want a dish that impressions your guests, now in anticipation of the holiday season, This would be a good choice. Is, since I am a great admirer of this type of meat, I suggest you also look at all my RECIPES WITH PORK: simple recipes, as the traditional PORK LOIN WITH MILK (even on my YouTube channel VIDEORECIPE), but also creative with PORK WITH PLUM. Have a good day! 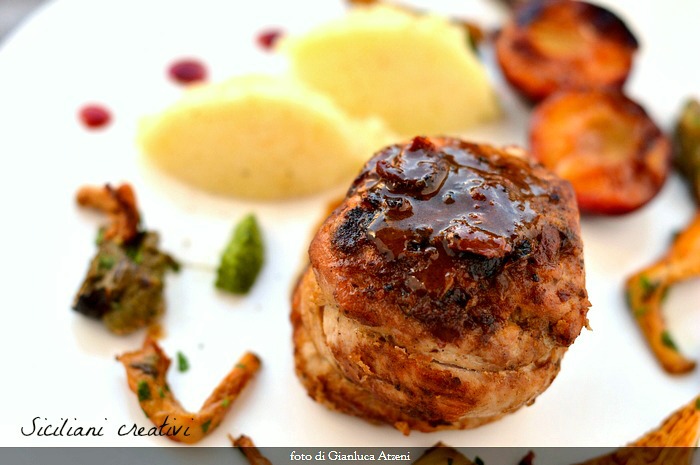 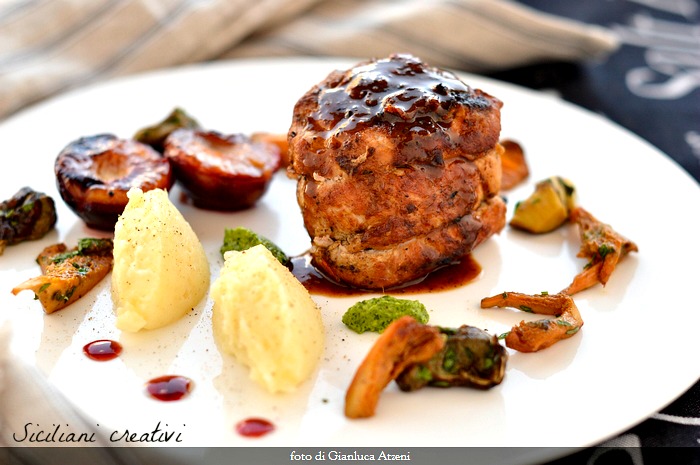 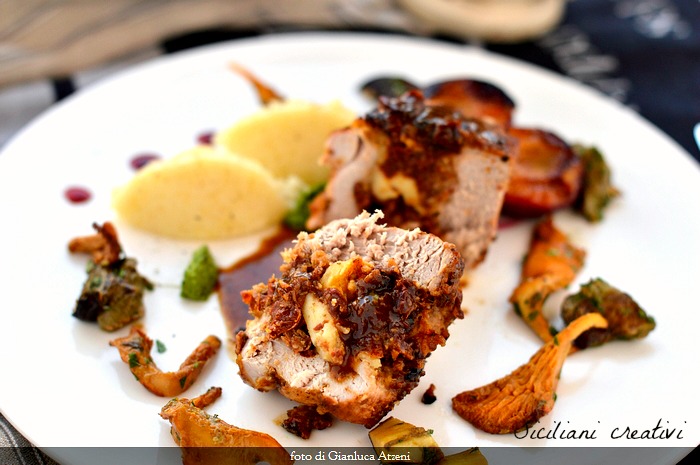 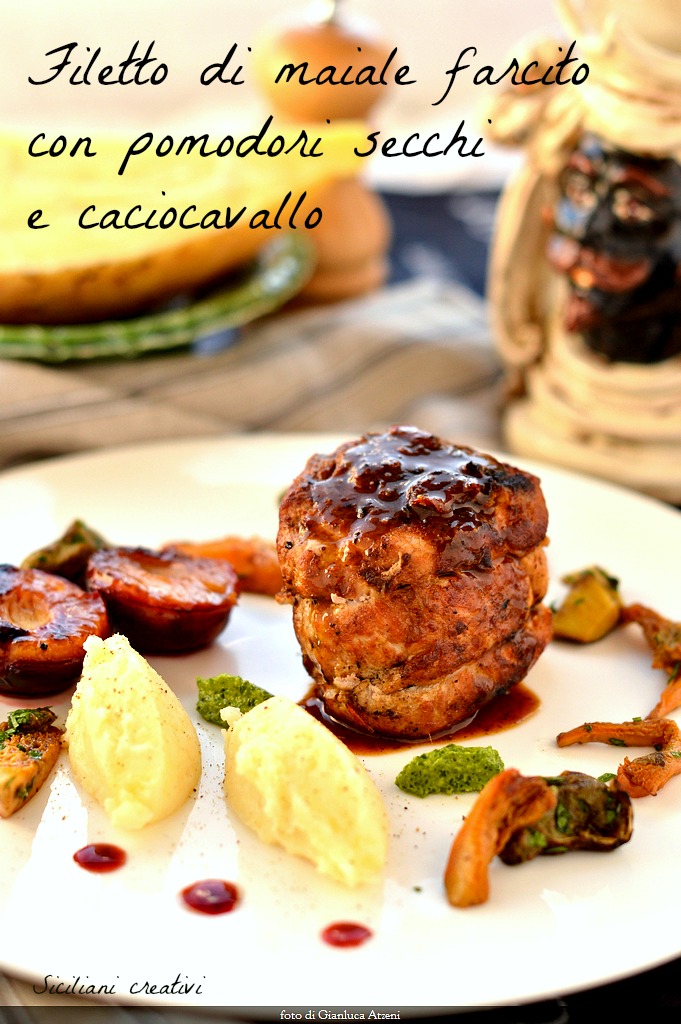 Cut the Pork fillet in the Center with a sharp knife and remove a segment in order to obtain a hole right through to be able to stuff the meat.

Coarsely chop the sun-dried tomatoes, the capers and caciocavallo. Put the topping in a bowl and season with a drizzle of extra virgin olive oil. Stuff the pork tenderloin with the chopped tomatoes, capers and cheese, pressing down firmly to compact the stuffing. Tie the tenderloin with kitchen Twine so that, in baking, keep the shape. Salt and pepper the pork. Refrigerate until ready to bake.

Finely chop the shallot. Put in a pan with a drizzle of extra virgin olive oil, heat and Brown the pork fillets, turning them until they are golden on all sides. Add the chopped shallots and sauté, adding a tablespoon of broth so that the onion does not burn. When the shallots will be withered, Deglaze with white wine and add herbs. Once evaporated the alcoholic part, salt lightly and add a little broth. Bake covered for 20 minutes.

Remove the stuffed pork tenderloin from the Pan, strain the gravy into a colander to mesh netting to remove herbs and shallot. Mix the butter with the flour and add to the meat sauce, then cook over low heat until thick and glossy glaze.

Delete the string with which you had tied the fillets of pork and serve them, accompanied by their gravy, along with the outline you have chosen. Bon appétit!

Rabbit with red wine with le...

Lovely recipe.,But if you pit does not escape the filling?

Hello Laura! No the filling doesn't come out, use a cheese very seasoned so it doesn't melt too; just close well and liqueurs first on sides and then on both sides with holes and, once it browned on the last side not longer touches. You will be the same as mine, There are no more secrets. Let me know, ADA