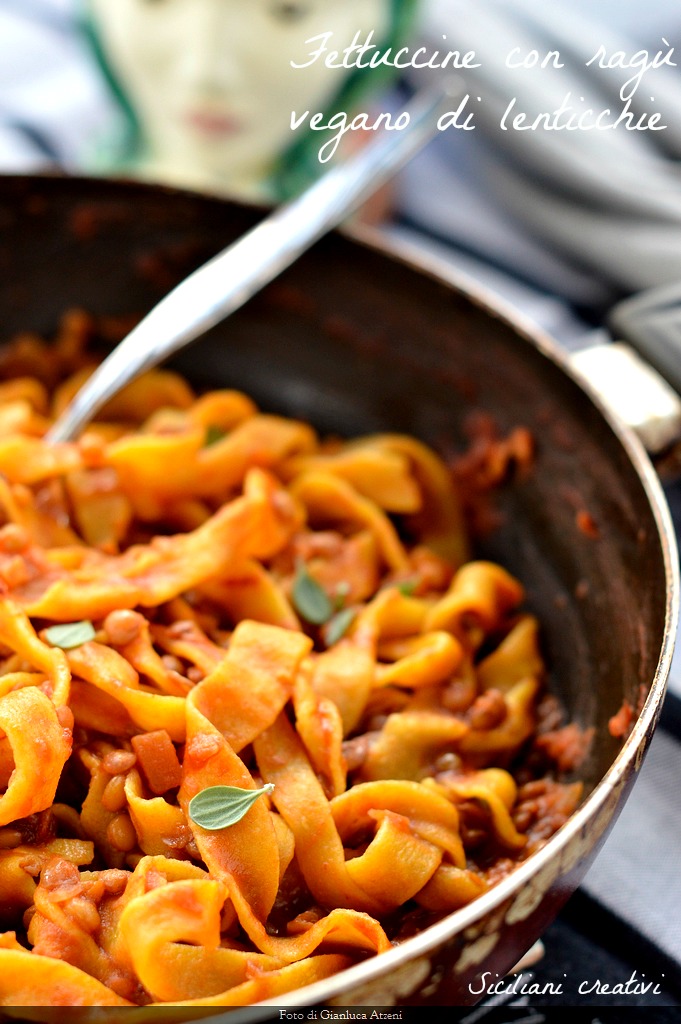 Fettuccine with vegan lentil sauce: a recipe for ragout meatless and without animal derivatives that you will fall in love with. Can a sauce without the meat to have the taste of real meat sauce? This is the dilemma. But I have to admit I went from skepticism to trust because these fettuccine with vegan lentil ragout are really amazing.. You know I'm not a lover of red meat, few exceptions: the sauce is one of them. I intend my sauce, not the bolognese which deserves a separate chapter: I make up a very small sauce, spicy, Saber. Then, after seeing several lentil sauces on Instagram, prepared especially abroad, I decided to make my own version of lentil sauce. Which for me has become a great alternative to PASTA AND LENTILS traditional.

I used lentils the same way I use meat, except for a brief initial boiling to soften slightly. Then, My vegan lentil sauce has a nice fried, a robust browning, the tomato paste and the gravy, red wine and many spices and herbs (Laurel, Juniper, clove, Sage, rosemary and marjoram), in addition to a long cooking, u'ora of about thirty. The result you see in the photographs: with vegan lentil ragout I seasoned egg fettuccine homemade, thick and al dente.

I only say that my partner, that the lentils loves them and is carnivore, told me that, if he had not been able to, the first bite would have been hard to tell the difference. Certain, the consistency of lentils is different from that of meat, but I assure you that this sauce will be an extremely pleasant surprise even for non-vegans, because lentils are an important source of protein and are a very good substitute for meat, which must not abuse.

I, who are not vegan, I used egg pasta and I seasoned the dish with Parmigiano Reggiano. The lentil ragout can also be used to prepare lasagna or baked pasta, and you can also freeze in an airtight glass jar, just as you do with traditional meat sauce. At this point, have a look at all my VEGAN RECIPES and my RELATED LINKS and have a good day! 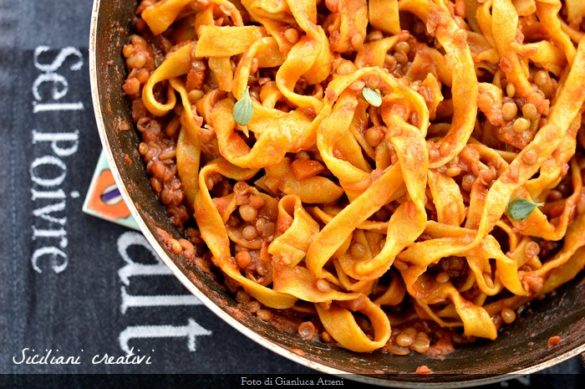 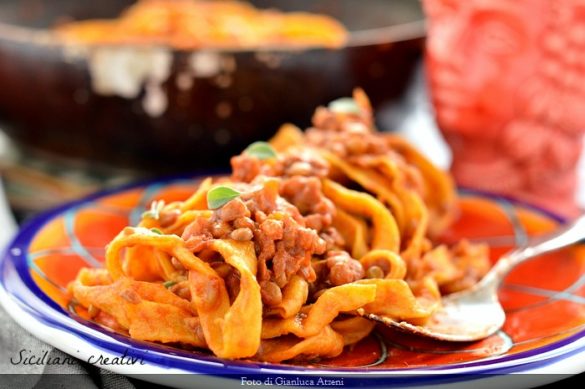 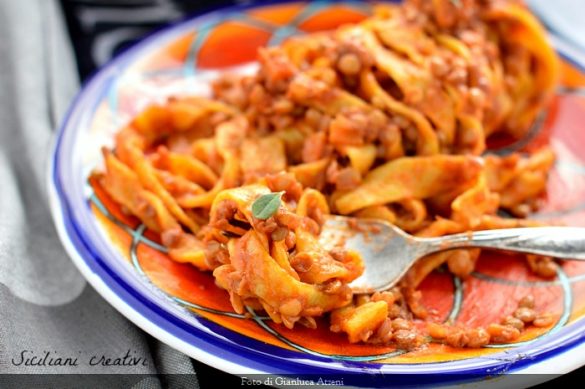 a stalk of celery

half an onion or green onion

a piece of Leek 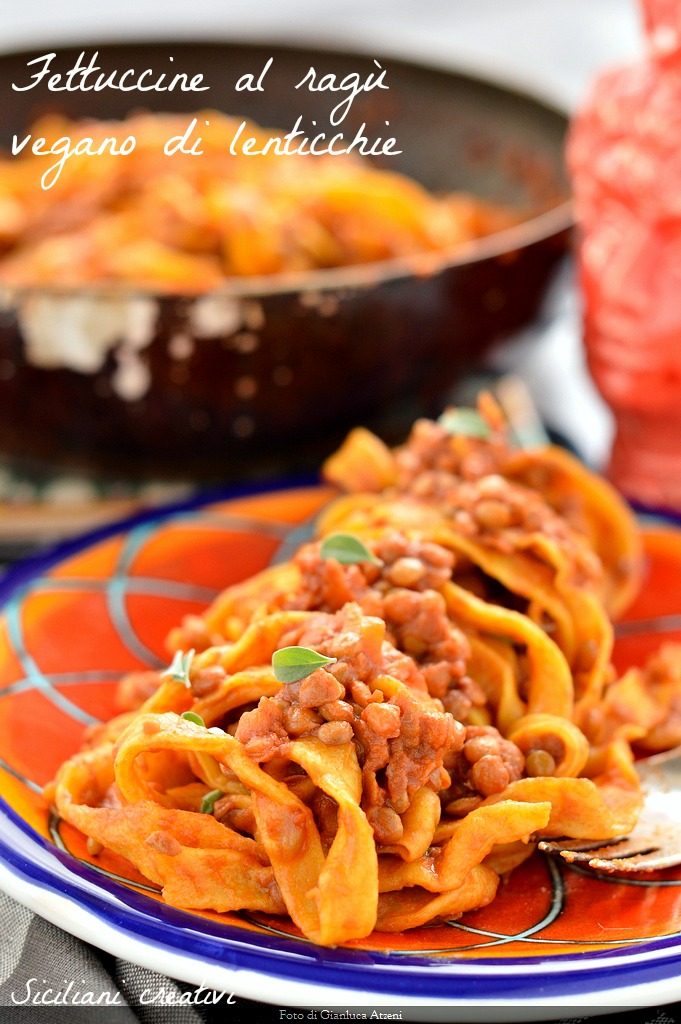 To prepare the vegan lentil sauce, you have to boil the lentils for 20 minutes in salted water, then drain and set aside. Finely chop the onion, celery and carrot, just as when preparing for a sauté the chopped vegetables.

Sauté in olive oil (do not hold back, lentils do not contain the fat that is contained in the flesh instead) and low heat the chopped vegetables and a bit of chilli (If you like), adding hot water and very little salt: When the vegetables are translucent (it will take about 10-15 minutes, do not rush), add the boiled lentils earlier and fry for a few minutes.

When the lentils are browned, combine the tomato concentrate, stir and deglaze with red wine. When alcohol has evaporated, add to sauce vegan spicy lentils and herbs: Laurel, Juniper, clove, sage and marjoram. Finally, combine with meat sauce tomato sauce, a little hot vegetable broth and some salt. Cook the vegan lentil ragout for at least an hour, stirring occasionally for sampling and salt to taste.

Boil the fettuccine al dente, I got them in the house and you can follow my RECIPE FOR EGG PASTA, and drain them by storing some cooking water. Skip the noodles in a pan with the vegan lentil sauce, adding some cooking water to get the desired sauce density, and some raw extra virgin olive oil. Serve immediately fettuccine vegan lentil sauce (a little Parmesan Cheese After grated there is great) and Bon Appetit!

If you are vegan and use a paste of semolina (without eggs) I would suggest a short pasta type pipe rigate or half sleeves rigate. Do not use a smooth paste because lentils prefer the roughness. Yet, if you want to freeze the vegan lentil sauce, it is sufficient to put it into glass jars hermetically closing and consume it within one month.

You can use pre-cooked lentils you can buy in the can? Thank you very much for your answer :)

hello Victory, Yes. Rinse them under running water and of course skip the boiling. The only thing we do not know is if you reduce the total times for the cooking sauce. Taste often not overcook, so that the lentils mamtengano consistency. Let me know, ADA

LE I tested with lentils canned. The cooking was shorter, in fact, but the truly incomparable taste.
Is’ Everyone loved my diners. Thanks again Ada! You are a guarantee!

hello Victory! I'm happy, I am quite proud of this recipe, then a warm greeting and thank you, ADA

Super good as usual your recipes
Thanks
A big kiss

And you super nice as always. Kisses, ADA

and’ the same with green lentils? And without precooking?

And here I find myself unprepared. They peeled lentils?