Today I'll throw you a delicious idea: Here's ten recipes for a lunch of Ferragosto all Sicilian. If you like, this year I invite you to spend an August 15th with all the flavors and scents of my island, bringing to the table the most delicious and well-known summer specialties of Sicily. To triumph are the most traditional recipes and there is one for every taste. from pasta alla Norma to that with sardines, passing through the arancini of various types and the different types of pork chops (spring rolls) and the classic reinforcing contours, as the Eggplant caponata. To conclude with the inevitable Watermelon Frost. Many of these dishes are perfect even if you are planning a picnic or a trip out of town both at the sea and in the mountains.

Most of these ten recipes for an all-Sicilian Lunch in August are easy to execute. Indeed, some needs to be prepared in advance, because good things need time to become even better. And that way you'll have more time to get organized and do everything calmly, in case of very hot days.

Obviously, Sicily at the table is as rich as it varies from province to province. Indeed, often within the same province there are very different culinary traditions.

ARANCINI OR BAKED PASTA, A CLASSIC OF SICILIAN AUGUST

On some things, though, let's all get along: like arancini or arancine, depending on the area. Season in a variety of ways: by ARANCINI Messina bologna in the filling, to the traditional arancine of Palermo RED WITH RAGU’ or WHITE WITH BUTTER. Without forgetting the amazing ARANCINI CATANESI WITH PISTACHIO.

Yet, classic baked pasta triumphs on Sicilian tables, which in Palermo is traditionally the classic TIMBALLO OF SICILIAN ANELLETTI, wrapped in fried aubergines and with one of the most curious pasta formats ever. In The Mexican, this dish is transformed into INCASCIATA PASTA, much loved by Commissioner Montalbano by Andrea Camilleri, with a meat sauce, salami, hard boiled eggs, fried eggplant, peas and cheese. A real bomb of taste and calories. In Catalonia, on the other hand, there is a need for PASTA WITH STANDARD, now world famous. A traditional Sicilian recipe much loved in Messina, in the variant with baked ricotta instead of salted ricotta. 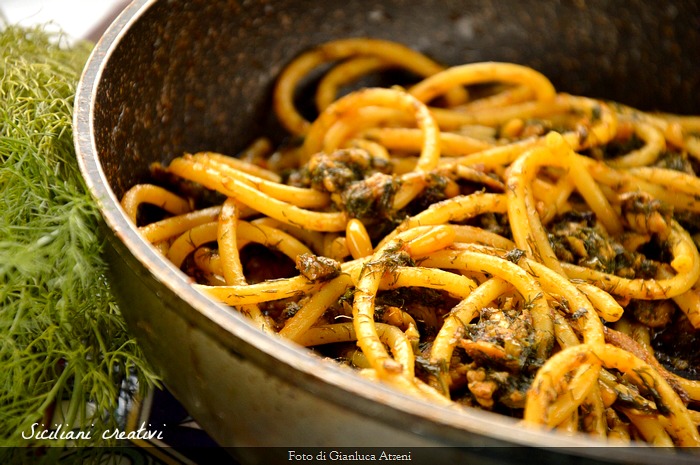 For seafood lovers, The choice is obligatory: Lunch in August sicilian is the name of PASTA WITH SARDINES, with its unforgettable wild fennel aroma. Maybe followed by the traditional SARDE A BECCAFICO as a main dish. Or from the ANCHOVIES IN PIE TO SICILY, easy and tasty, also perfect to take on a picnic.

Actually, Sicilian August has a strong preference for land dishes over sea dishes, perhaps also because of the widespread custom of celebrating the August with an out-of-town trip. Among the latter is the classic grilling of castrato and black pork sprouts of the Nebrodi.

But my favorite dish is definitely the MEAT CUTLETS ALLA MESSINESE DI CARNE (the most loved, with beef, veal or pork), both of SWORDFISH or Spatula(fish flag).

THE CONTOURS OF AUGUST WITH HIS MAJESTY’ THE AUBERGINE

As at Christmas in Campania, prepare the reinforcement salad, even in Sicily there are the typical contours of August, that help to raise the calorie tax of lunch even further. All are based on the queen of the Sicilian summer vegetable: eggplant. Here's, then, the EGGPLANT CAPONATA, the Parmigiana and the gluttonous EGGPLANT MEATBALLS, to try also in the delicious version WITH TOMATO SAUCE. Three dishes to prepare in advance, comfortable even if you have decided to organize a picnic with family or friends.. 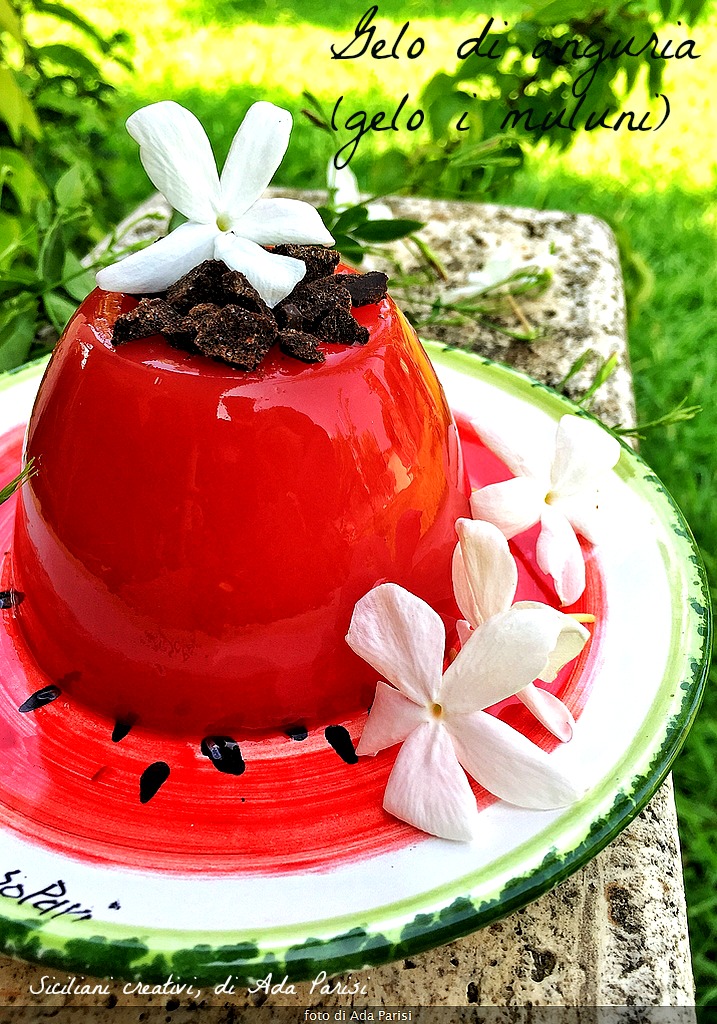 THE DOLCE OF AUGUST, NOT ONLY CANNOLI

If you have decided to prepare a menu based on Sicilian recipes for August, Now you just have to think about the sweet. The most traditional dessert, Refreshing, light that I can suggest is definitely the WATERMELON FROST. A traditional recipe palermitana, very good even in the version “transportable”, that's the one TART TO COVER WATERMELON FROST. Alternatively, try the aromatic and romantic FROST CINNAMON.

I know that many of you will be surprised at the failure to close the Sicilian lunch in August with the traditional SICILIAN CANNOLI. But you must know that sheep's cottage cheese, prince ingredient of Sicilian cannoli, in the summer it is not frequently found, because the sheep are dry (resting phase where no milk is produced). It is replaced by vaccinated cottage cheese, which is less flavorful. In any case, if you want to prepare the cannoli anyway, you can also follow my VIDEO RECIPE STEP BY STEP. 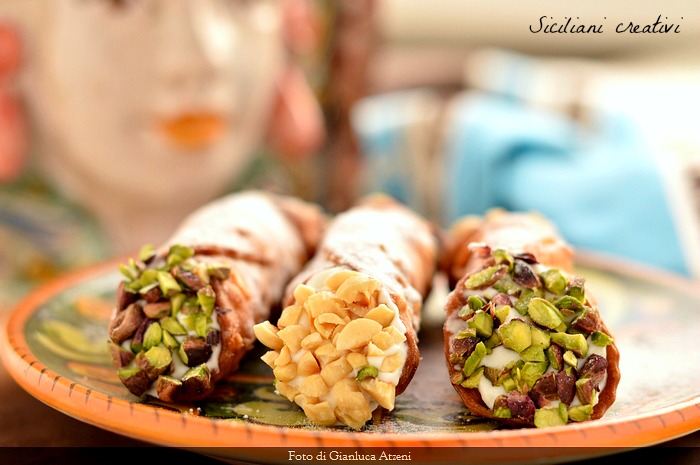 WINE OR BEER? WHAT TO DRINK IN SICILIAN AUGUST

What to drink in combination with these ten recipes for an all Sicilian Lunch of August? Beer, served very fresh, is our first choice of pairing for these traditional recipes, especially in the case of picnics. Also because, compared to wine, beers often have a lower alcohol content. Great solution when there is a big heat. The “Straits Beer”, produced by the Brewery Messina, is the one we suggest to try with the arancini to the Mexican.

For the eggplant meatballs we choose the Beer Messina Salt Crystals, was created by an agreement between Heineken and the Messina Brewery: fresh and drinkable. To accompany eggplant parmigiana we suggest “Typhon”, a sturdy Belgian ale brewery Epica by Sinagra. The perfect beer for Pasta Norma is Tari Oncia, a double malt of the Tarì brewery di Modica. For the caponata, Finally, we suggest “Himera, A. Himera”, a handcrafted lager of the Semedorato brewery Caltanissetta.

Let's come to the wine. For the timballo of anelletti we recommend the Donnafugata brut rosé, fruity scents, spicy and elegant. For swordfish chops and spatula fish, the Grillo vine is the most suitable: our choice is “Aegades, 1st Engades”, Doc Erice's Winery Fazio, in the province of Trapani. And if white wine matches fish, with the mexican meat chops we combine Chiaramonte, an elegant Black of Avola winery Firriato.

Pasta with sardines seems born to be accompanied by “Pietramarina”, a upper white Etna Doc's Wineries Benanti, elegant and complex wine, produced by a historic sicilian volcano company. With the pasta we couldn't help but choose Mexican wine: a Doc Lighthouse of the Seal Jelmar La Fauci, Messina's own (contrada Sparcity). Finally, With the watermelon frost, treat yourself to the luxury of a pass by Pantelleria Doc. From the black stone of this island enchanted and lashed by the wind is born “NES”, produced by Carlo Pellegrino wineries, great value for money.