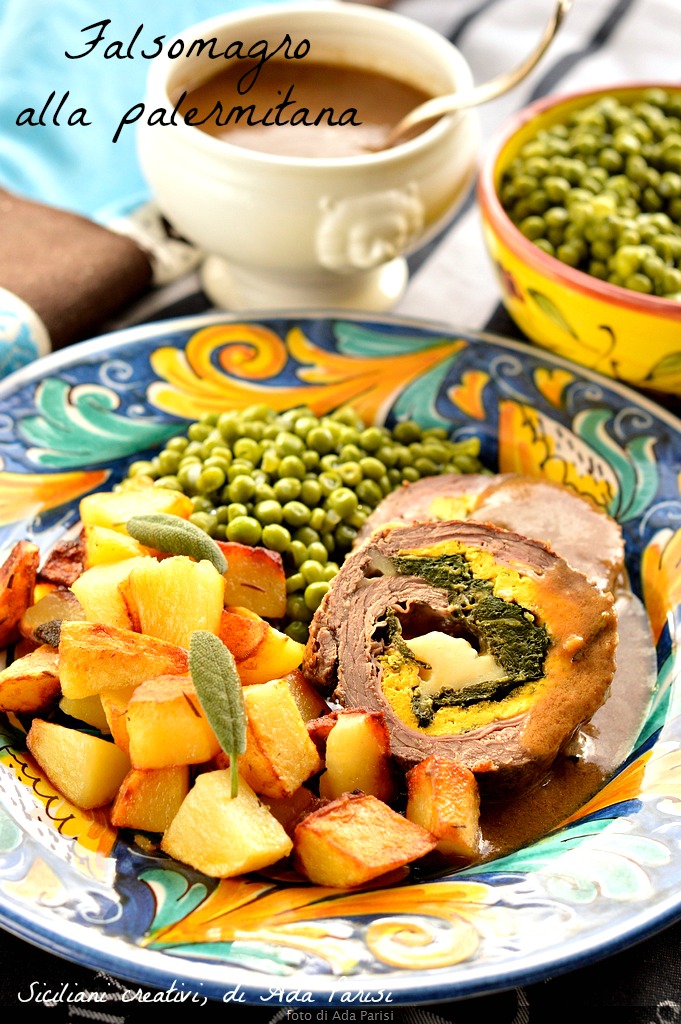 Today His Majesty the falsomagro to Palermo, one of the meat seconds more typical of Sicilian cuisine and widespread with different variations more or less throughout the island. In Messina is called “farsumagru” and it is preferably cooked in a tomato sauce, while Palermo is called “bruciuluni” and prepares more often agglassato, “aggrasciato”, that is cooked in a sauce made with wine and onions. What I present is just the falsomagro Palermo style, and you can also found the VIDEO RECIPE on my YouTube channel.

The origins of the Sicilian falsomagro

The word falsomagro (well written, all attacked) It has controversial origins: it could result from the appearance of a simple meat touch 'falsely lean'’ because in reality it is stuffed with a lot of good things. Or it could be a Frenchism from “fairce lean” ie stuffing thin. In any case, the stuffed with falsomagro are many and all different: boiled eggs or omelette, cheese, spinach or chard, cold cuts such as mortadella, ham or bacon. Some spread on a layer of ground meat seasoned: I do not love. If you want to prepare a meal made in Sicily, I recommend to combine this dish to INCASCIATA PASTA Messina, the one made famous by Montalbano and maestro Andrea Camilleri.

The cut of meat

The cut of meat for the false lean is the cover below, but it also goes well the topside. I do not recommend the walker, too thin and dry. Much it depends on the skill of the butcher, which should be able to derive a fairly thin slice and homogeneous dimension. The meat in the pictures and VIDEO RECIPE STEP BY STEP on my YouTube channel, for me is not thin enough, but in Rome they were not able to do better. In any case, I suggest you beat the meat with a meat mallet to sfibrarla and it thin as possible, so that it becomes more tender as possible.

Traditionally the falsomagro slowly cooked is served with baked potatoes cut into large pieces and flavored with rosemary and peas stewed, but I also broke a lance in favor of a nice mashed potatoes. Thel falsomagro is a traditional dish also of Sicilian Christmas, then save the recipe. Obviously take a look at all my SICILIAN RECIPES and my MEAT RECIPES. Have a good day! 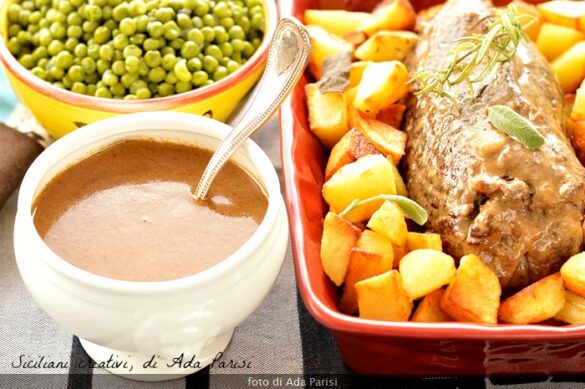 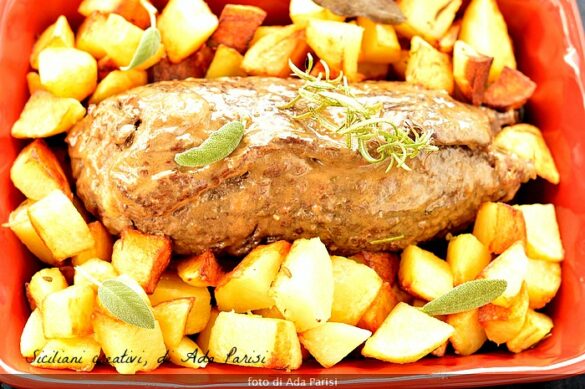 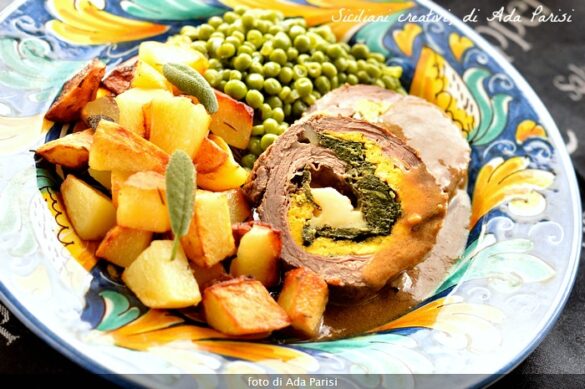 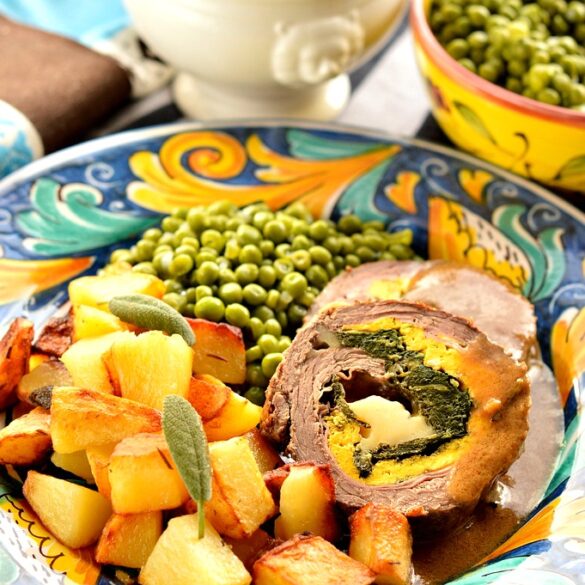 200 grams of mortadella sliced ​​half a centimeter thick

sage and fresh rosemary, to taste

2 medium onions or one large onion

twine to tie the falsomagro 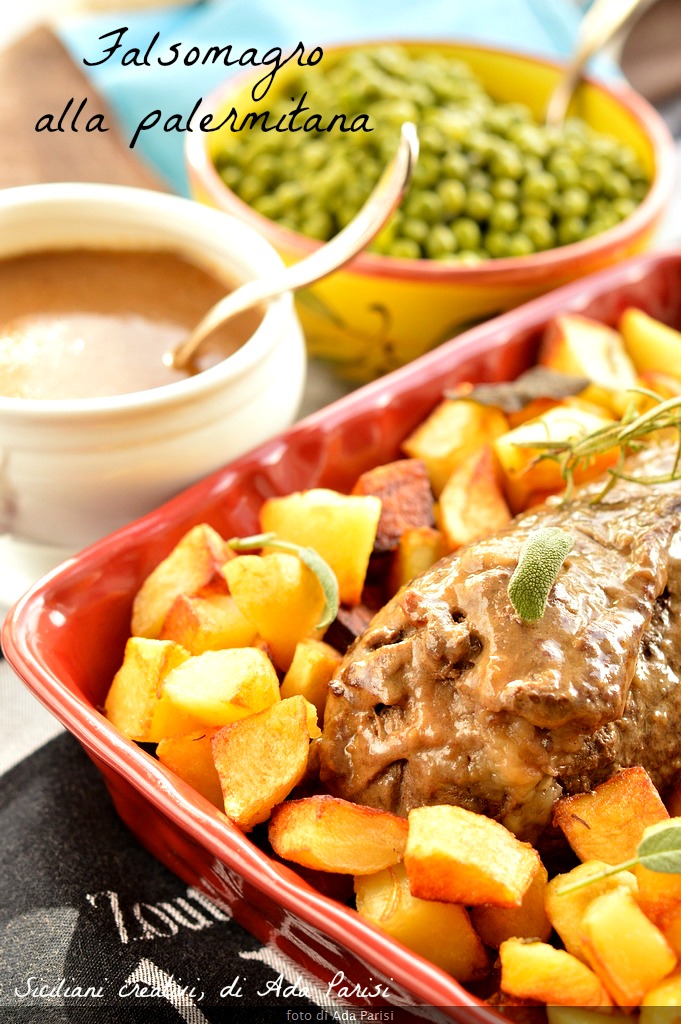 The preparation of the falsemagro is a bit laborious, but it is not anything particularly complex. We start from the flesh: place that the slice of meat should be of regular size (tending to rectangular shape) and of equal thickness, I advise you to beat and sfibrarla with a meat mallet to make it more tender. Remember also that the meat will then be rolled up in the direction of fiber, otherwise it will be tough.

Once you beat the meat as you have seen me do in VIDEO RECIPE step by step (subscribe to my YouTube Channel), cover with plastic wrap and set aside.

Wash the spinach, drain them well and cook them in a pan with a little butter and little salt. Cook the spinach and covered over low heat until they are tender. Drain the spinach and leave them in a colander to lose water vegetation: the spinach must be dry, otherwise dampen the falsomagro.

Prepare the omelette beating eggs with parsley, the Parmesan, salt and pepper. Try to make sure that the omelet has the size of the slice of meat that you will use to make the falsomagro.

It is good that the cheese is in one block, because the larger less will melt during cooking (but it's normal for some cheese to come out of the fakemagro in cooking, do not worry because the sauce further insaporirà).

Lay the meat on the work surface, cover the meat with slices of mortadella, have on the omelet mortadella, cover with boiled spinach and well squeezed and, Finally falsomagro place on the cheese as you see in VIDEO RECIPE on my YouTube channel. 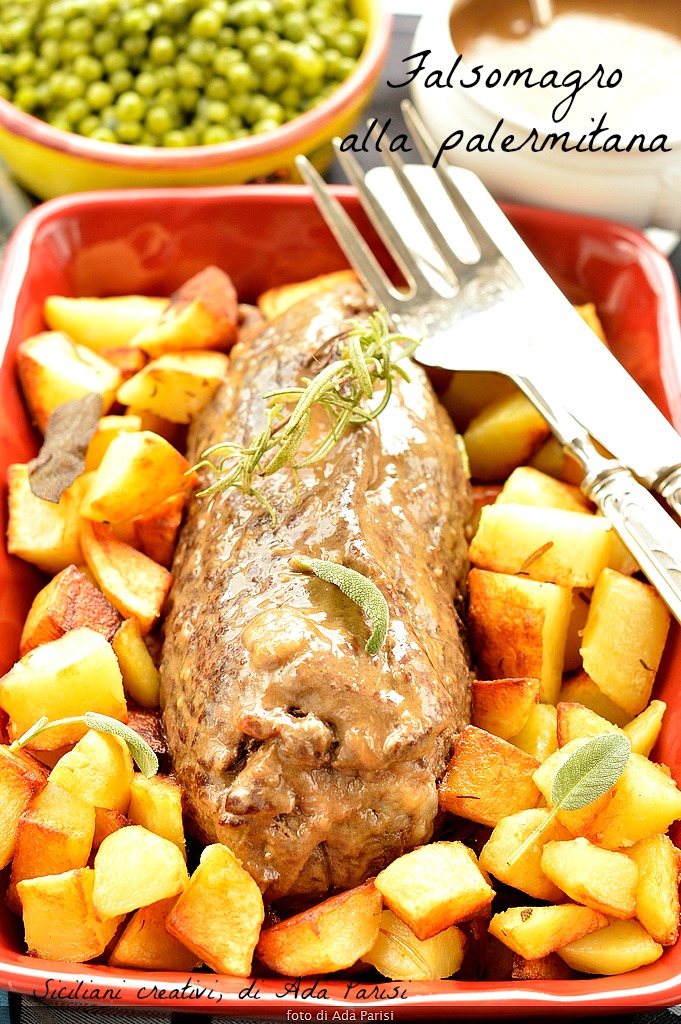 Roll the falsemagro on itself trying to fold the flaps of the short sides inwards, so as not to spill the filling. Stopping the short sides with wooden skewers, that will remove after cooking. At this point, falsomagro you have to tie with kitchen string, so that it is firmly.

Having tied the falsomagro, sprinkle with salt and massage it on the whole surface, so add salt evenly. Slice the onion into slices not too thin.

Put in a pan abundant olive oil and brown the falsomagro medium heat on all sides, so that it is evenly golden. Add the onion and saute. Blend with white wine and let the alcohol evaporate. Once the alcohol is nuanced, add a pinch of salt and spices: the tradition is to use fresh sage and rosemary. Cover and cook the forgery for an hour.

Finish cooking, remove the falsomagro from the pan and set it aside. I advise you to let it rest for several hours falsomagro, so that it is compact and insaporisca. Blend the sauce in a blender, so as to obtain a compound omegeneos. Put the sauce in the Pan. Mix a little butter with a teaspoon of cornstarch, manipulating them with his hands and put the butter mixed with the cornstarch in the sauce. Like this, cornstarch will not make lumps. Cook the sauce over high heat until it reaches the desired density.

Slicing falsomagro thick slices one centimeter. The traditional contour of falsomagro agglassato (farsumagru aggrasciatu) They are baked potatoes with rosemary and peas stewed. Serve the meat sprinkled with hot sauce and the contours. Bon appétit!

MATCHING: Cerasuolo di Vittoria Docg. We chose Amaranto, a Sicilian red wine produced by the company Tenuta Santo Spirito, to victory in the province of Ragusa. A blend of Frappato and Nero d'Avola grapes. Fermentation and aging take place in steel. This allows you to keep intact as much as possible the varietal characteristics: nose of red fruit (cherry, currants and flowers), very fresh taste, elegant. From serve around 16 degrees of temperature.

The falsomagro you can safely prepare a day in advance and refrigerate for two to three days.

Vegetarian pasta with eggplant and tomatoes...