Phyllo pie with leeks and potatoes 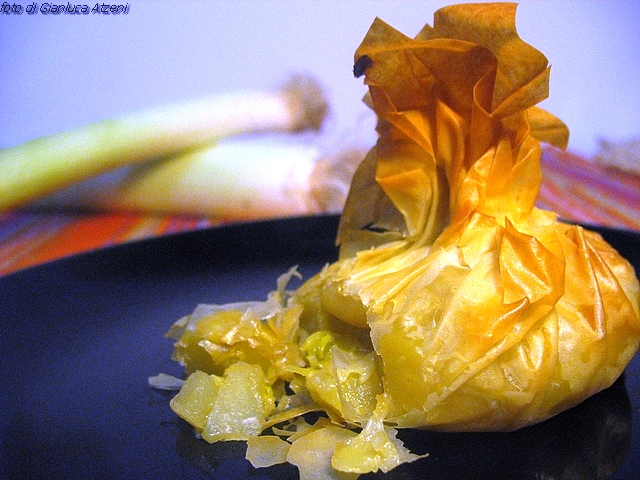 Phyllo pie with leeks and potatoes. A delicious appetizer and quick to do. I'm in love with phyllo dough, its versatility and crispiness: according to me with vegetables gives the best of itself. The result is a strudel but shaped bundle, crispy and tasty… You can of course stuff according to your tastes: Here you will find potatoes, leeks, provolone and the inevitable raisins and pine nuts.

Wash, clean and cut into pieces about one centimeter potatoes and sliced not too thin leeks. Put olive oil in a frying pan, heat over low heat and add the potatoes and leeks, then the pine nuts and raisins. Season with salt and pepper and cook it all, gradually adding a little hot water, until the vegetables become soft, about 15-20 minutes. Preheat oven to 200 degrees static.

Cut into small pieces and add the provolone, fire off, with vegetables. Take a sheet of phyllo dough and brush with a little oil, use another and paint that too, and finally a third: put in the Middle a little stuffing and close forming a bundle: the Phyllo Dough, tight with your hands with a ' twist ', will be closed. Brush around the bundle with a little oil and follow the same procedure with the other three. Bake for about 10-12 minutes and then for 2 minutes in a convection oven, until the Phyllo Dough becomes crisp and Golden. Served piping hot.

THE PAIRING: a wine Trebbiano d'Abruzzo is our suggestion for this tasty dish. We chose the’Winery Tiberius, located between the Majella and Gran Sasso of Italy: a wine with intense floral aromas and fruity and dry taste.

Hi Christian!!! The pleasure was mine! The traditional blog already arancini…But tonight I've prepared two other types that come out soon…I know I shouldn't indulge, But how do you cook and eat!!??? I hope to see you soon! ADA

how beautiful ... I never use the phyllo so know nn nn then you'll wonder how you ever uses more layers,because it is very thin??do you think the Phyllo Dough you can make at home??GRZ in advance,a hug

Hi Elena! The phyllo dough is so thin that it is impossible to use a single layer, they always recommend at least three. I have a recipe to make it at home, but I've never tried, It seems to me impossible to achieve that subtlety…

Hello!!!! Good to see you on my blog. Hola, What a lovely surprise to see you also in my blog! Thanks, and if you try this let mw know the results!!! ADA