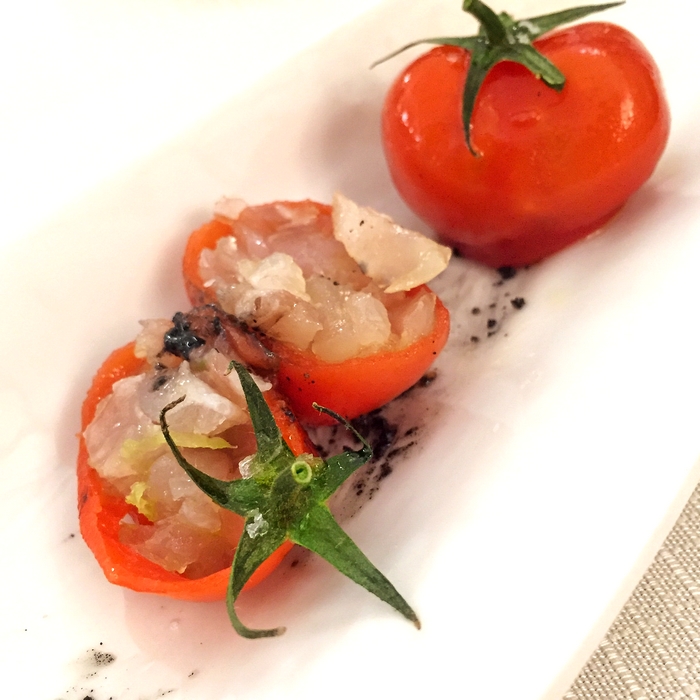 At least 4 years, every time you exit the new edition of the Michelin Guide, I look forward to reading assignments of new stars. And I always look for a name: to Stephen Dang, Sardinian young chef at the helm of the family restaurant in Cagliari, Dal Corsaro. A name that still, in that guide, Starry not. And frankly every year I wonder how it is possible that the Michelin inspectors lack systematically recognize this guy bruno serious gaze and passionate one of the chefs not only sardi, but Italians, of greatest interest. Stephen Dan is no longer a promise, How could it be in 2010 when he won the award for best emerging chefs for the Sun 24 Hours and Touring Club: is a certainty. Graduated from Alma, where now teaches, Dan is what you would call a “Geek”: the passion for cooking combines a passion for study and research, for reading and testing. Those who know him imagine with facility closed in the kitchen at three in the morning trying to balance a plate still not perfect, to remove an ingredient to make it stark and minimal, watching it rise bread peeled with saffron and raisins while he reads technical manuals of the kitchen. My visit in late July has done nothing but confirm what I already knew: Dan (that is part of the JRE) is a champion and, as he has done before him Roberto Petza, has now become a chef that can enhance with intelligence and balance the Sardinian territory in his dishes. Enhance the work of Stefano would encourage not just him, but the whole new generation of chefs who are working on the Sardinian territory to continue on its path. It would mean valuing Sardinia, It deserves more than a single star allotted to Roberto Petza (and even Roberto at this point of his career deserves more). 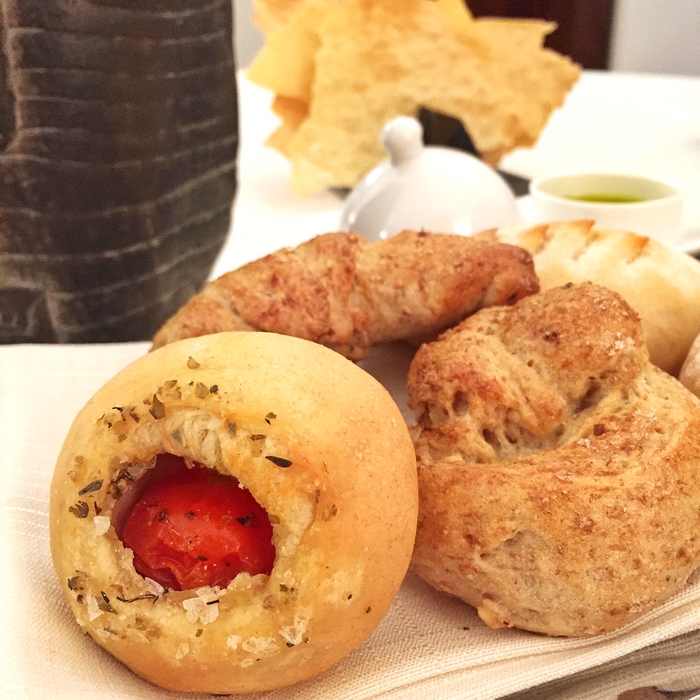 We come to my tasting. By Dan in August are two tasting menus: one to 65 euro (My Sardinia) and one to 80 euro (Cuisine in motion). I chose the second, by adding one of the dishes of the Sardinian menu. The restaurant is divided into two parts, a dedicated to Fork, the bistro devised a few years ago by Dan (highly recommended) and a haute cuisine: the service is prompt and friendly and there is also the mother of Stephen, sommelier. The wine list has a prevalence of Sardinian wines, Although there are also Italian and international labels, with a decent selection of bubbles. Markups average. Obviously homemade bread with sourdough and prepared in different types. Three appetizers offered by chef, starting from an amazing (and very technical) fake tomato stuffed with sea bass tartare. 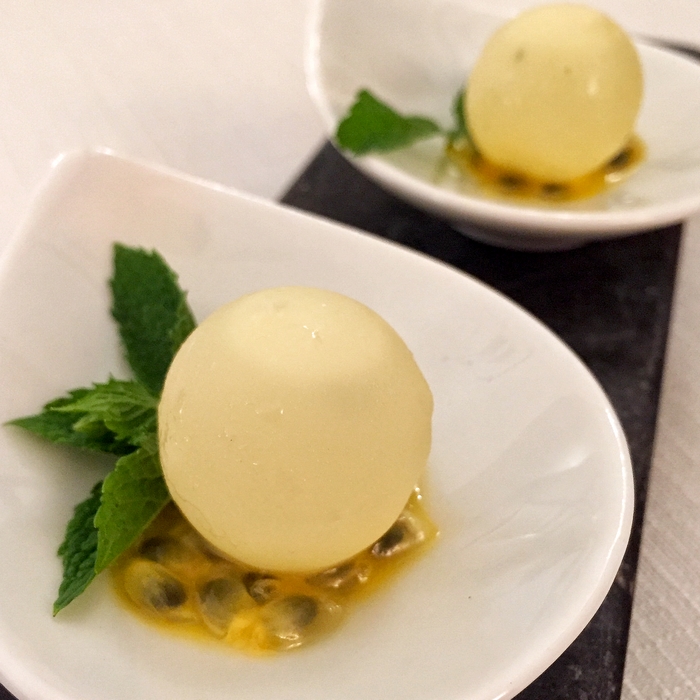 Then a ball of mohito and passion fruit: the shell of cocoa butter mint leaves room for the neutral scent and oiliness is immediately deleted by the acidity of passion fruit. 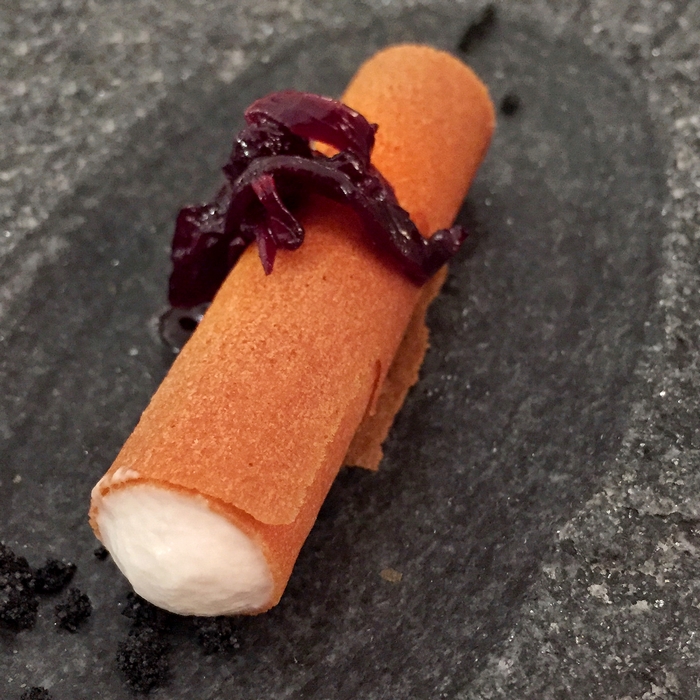 The third aperitif offered by the chef was a crispy wafer and friabilissima stuffed with goat cheese cream and served with caramelized onions. All accompanied by a Sardinian bubble. 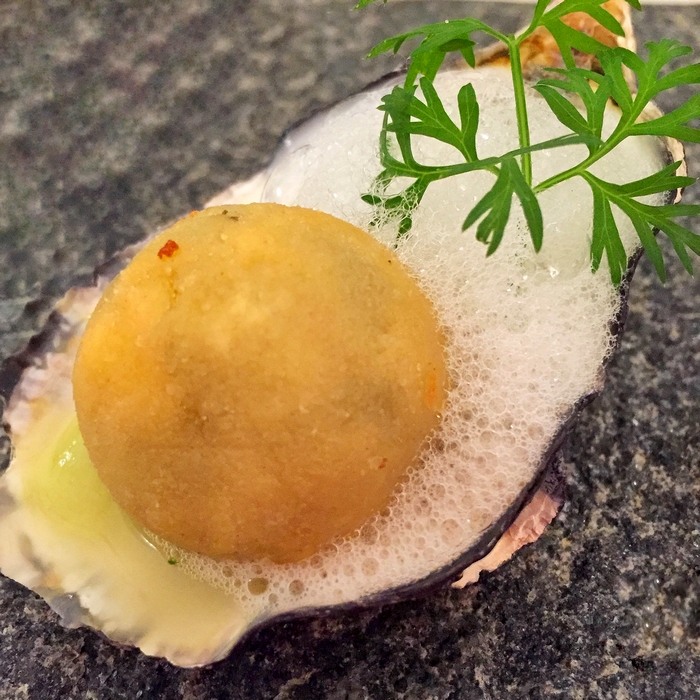 The first appetizer is called ' oyster ': Here too simplicity and technique are perfectly fused into a froth of oyster, the cream of Zucchini and especially in the sphere of raw oysters. The oysters are fresh and savory inside, While the exterior is crisp and hot waffle. 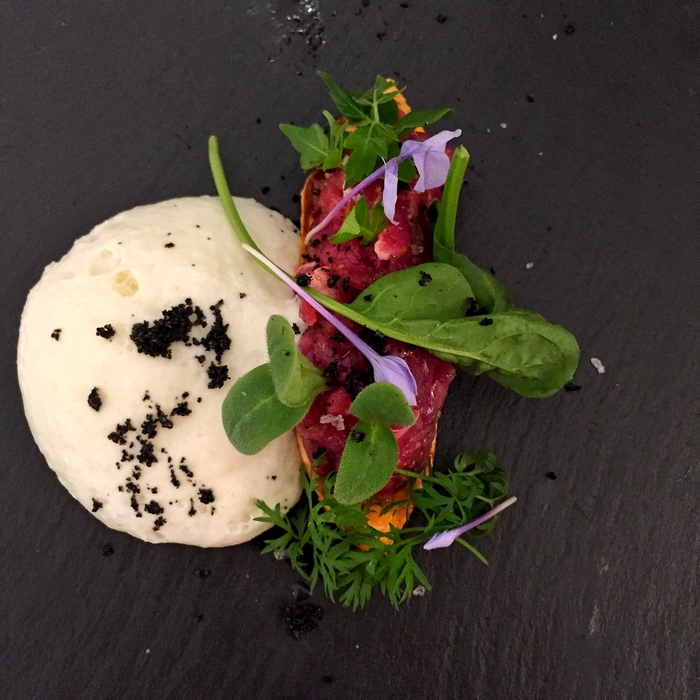 The second appetizer was a tartare of mutton (even here the Sardinian tradition) with crispy potato peels potatoes and tip cream. To mention the excellent local olive oil served with Tartar: Masoni Becciu Villacidro the company produces a top quality organic olive oil with Black cultivars of Villacidro and Gonnosfanadiga. 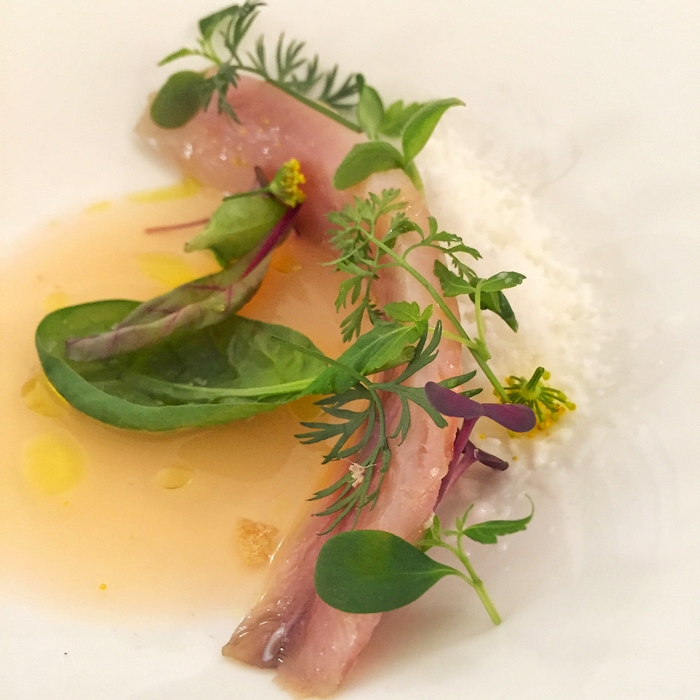 The tasting continued with a mullet fillet (one of the most commonly used fish in Sardinia) from the hint smoked, accompanied by tomato water and snow of yogurt, garnished from wild herbs and fennel flowers. 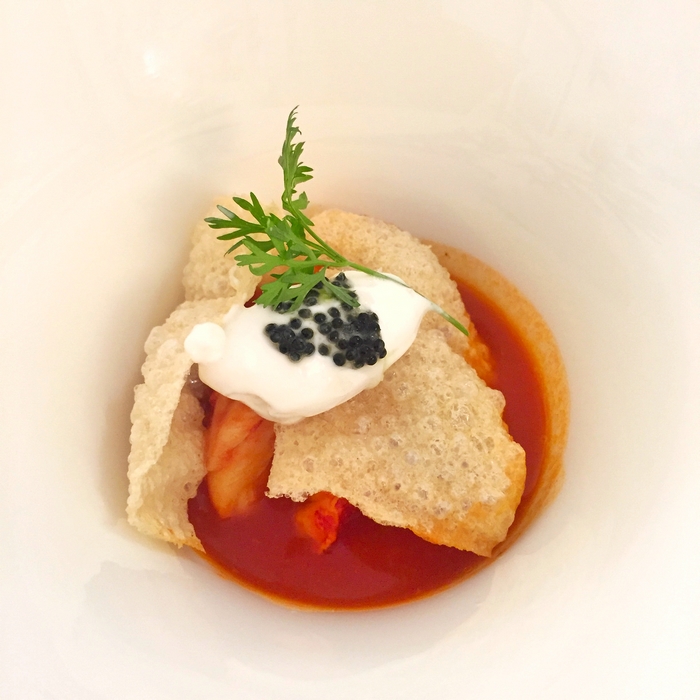 Intense flavor the soup of shellfish and blue lobster, with waffles blow of bread and a surprising ice cream to cauliflower, delicate but unmistakable, well balanced in the amount of sugar that is tied in with the sweetness of the soup. 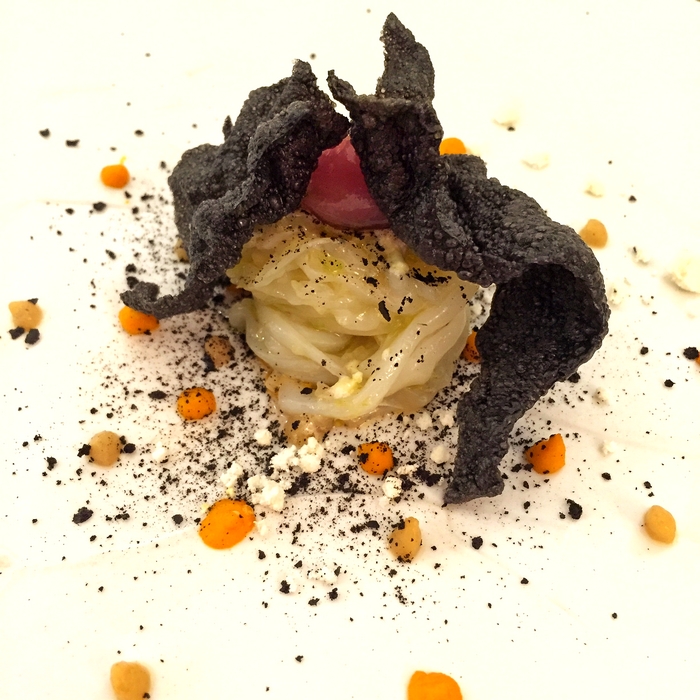 Then one of the dishes that currently represent the kitchen of Dan that, in the interpretation of fish, give the best of himself: the raw squid on the grill. Noodles of raw squid to which the hint of smoke is transmitted by a cream of carrot and a grilled Eggplant, Chef's choice waffle makers blow with squid ink, accompanied by a mild Sweet Onion liquid ravioli. 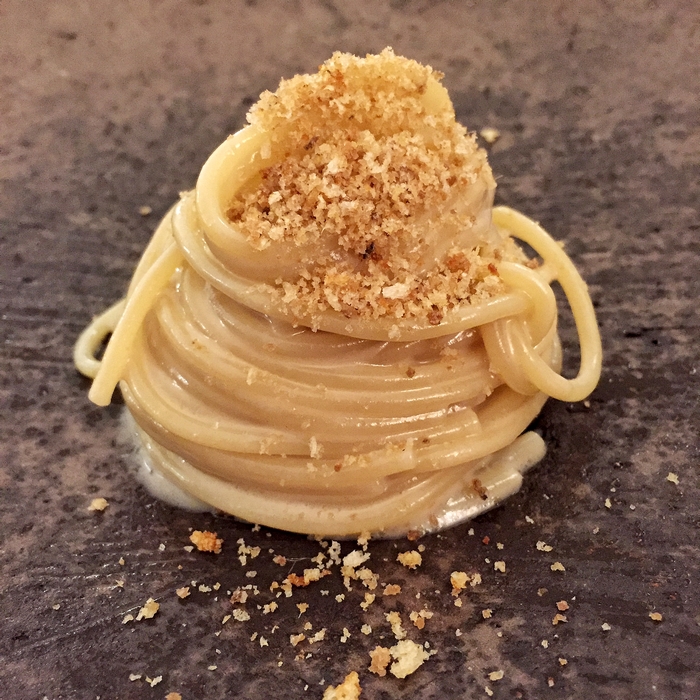 The first, from the description, seemed risky: spaghetti with anchovies and the fortissimo kid rennet. The risk of excessive salinity was lurking. Invece no: the dish has a strong taste and savory, but it is in balance. Nice then the contrast in texture between the cream of anchovies, Crispy bread crumbs and butter and curd to garnish. Minimal even lacquered sole with smoked Aubergine glaze and a delicate cream of rice: very few ingredients and a great technique performed behind another dish where Dan expresses his philosophy of Chef. The plate has echoes Orientals and soft textures that link all to exalt the contrast between perfumes: decided and smoked eggplant, delicate and almost floral one that rice. A very original and suitable for refined palates. 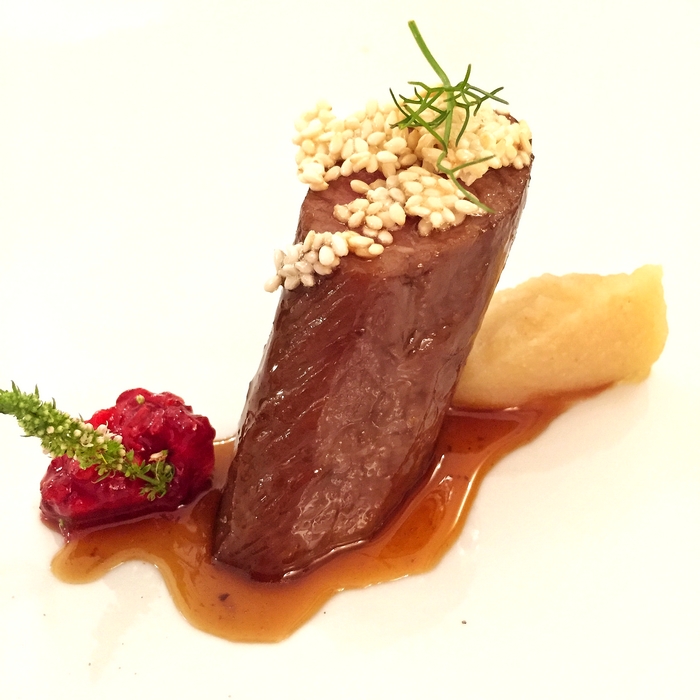 The main meat is surprising for Central European inspiration: a fillet of Lamb with its jus, from the perfect cooking, accompanied by mashed celery root, a White Sesame wafer and a mixture of raspberries to lend acidity to the collection. 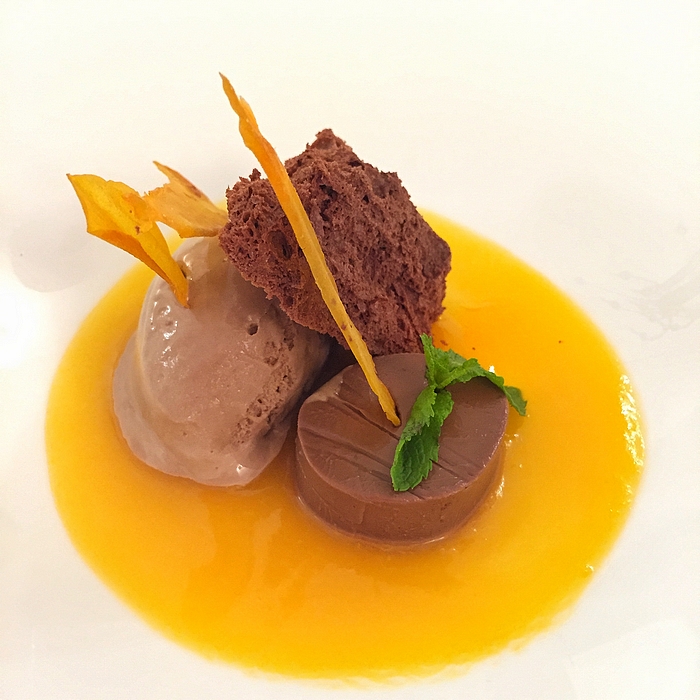 Finally the sweet, a sumptuous combination of dark chocolate in different textures and the acidity of apricot, submitted to natural as DrawString and then dried in the oven as Peel. The dark chocolate was in the form of ice cream, ganache and aerated, with textures and different temperatures. A dessert that, from a classic combination and made immortal by SacherTorte combining chocolate and apricot jam, come to a modern interpretation and light from perfect balance sweet-tart. While it is true that the cake is the extent that more remember a dinner, This dinner don't forget her. Look and read the name of Stephen Dang in 2017 Edition of Michelin, otherwise I get angry in earnest.