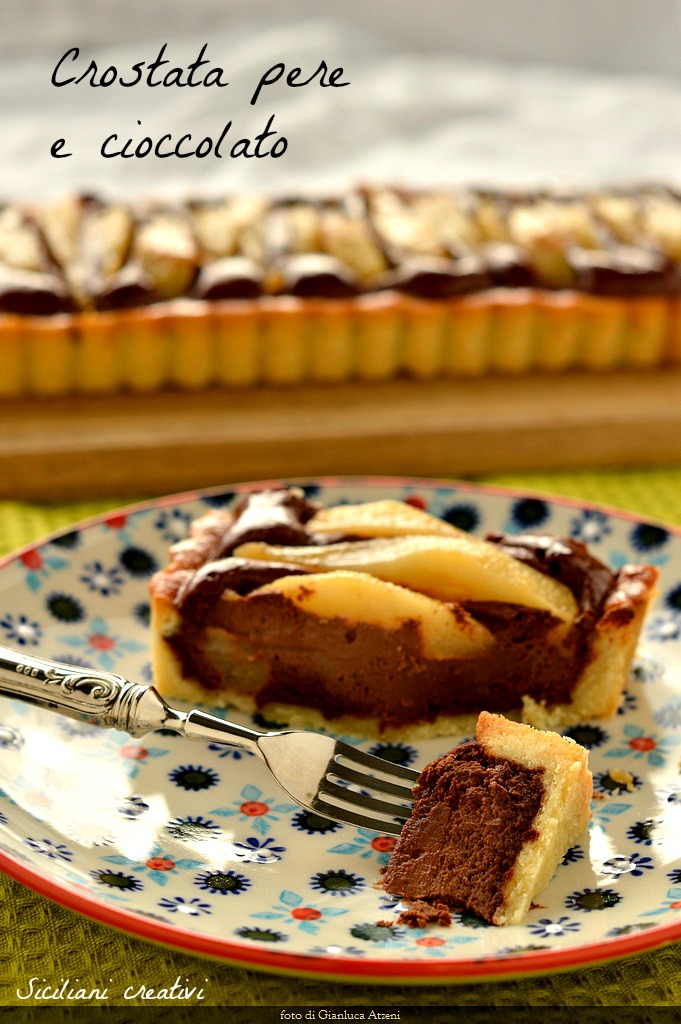 Pears And Chocolate Tart. But not any tart: the pastry is with almonds (Yes, You can also use the normal, No problem). The filling is a luscious cream with dark chocolate, that is baked in the oven becoming dense and scioglievole. The pears are cooked in a white wine-based liquid and spices, and remain firm and sweet, with that slight bit sour that makes the sweet but not cloying. The pear and chocolate tart is a sweet that everyone likes and, in this version, with the soft and spiced pears in chocolate that melts in your mouth, it is even more delicious. Looking at the list of ingredients, you will think that this is a difficult dessert. Instead, No.

This tart is very easy to prepare: I advise you to prepare in advance the basis for the pastry (Also a day before) and bake in advance even the baked pears. I think this pear and chocolate tart is one of the sweet sweet tooth I've ever done. Perfect in its simplicity, creamy, intense. must try, give me that satisfaction. And also try the soft, sinful and intense CHOCOLATE CAKE WITH PEARS AND CINNAMON, the CROSTATA COVERAGE WITH PERE AND CIOCCOLATO, with a beautiful weave cover that you can make thanks to the VIDEO TUTORIAL on my YouTube channel and the PUDDING PANETTONE, CIOCCOLATO AND PERE, a great way to recycle panettone leftovers, pandoro and doves. And have a nice day! 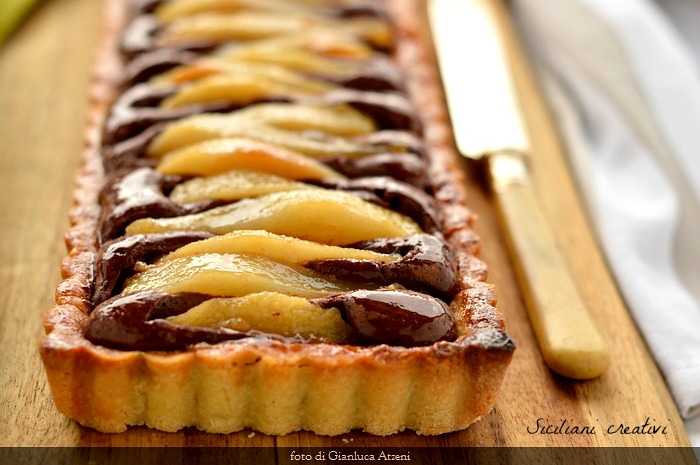 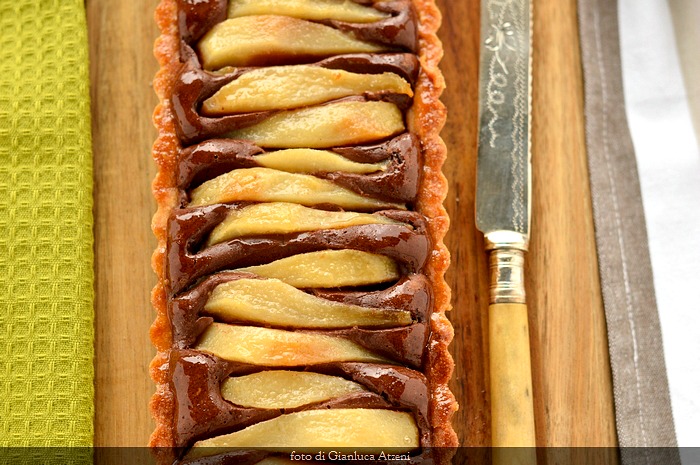 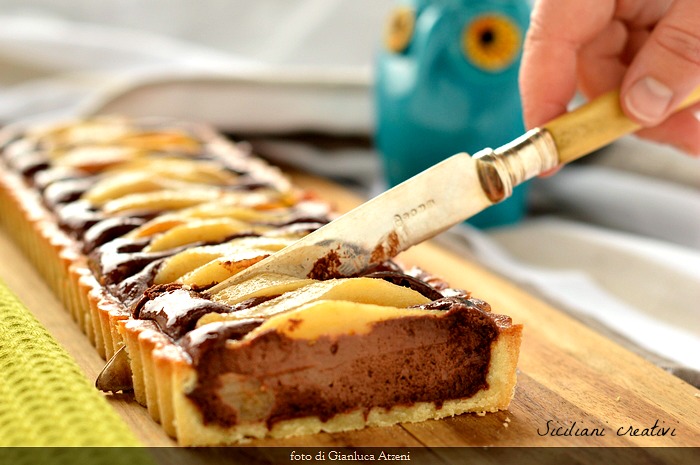 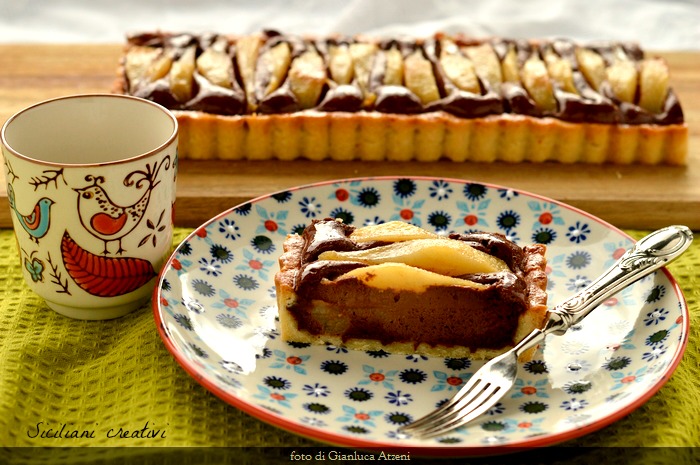 PEARS AND CHOCOLATE TART (doses for a mold of 22 cm)

FOR SHORT PASTRY ALMOND : (if you prefer to use a regular shortbread found here the recipe) :

a large pinch of salt

250 grams of dark chocolate to 72% minimum of cocoa

the grated rind of one orange

orange peel and lemon, to taste

a small piece of cinnamon 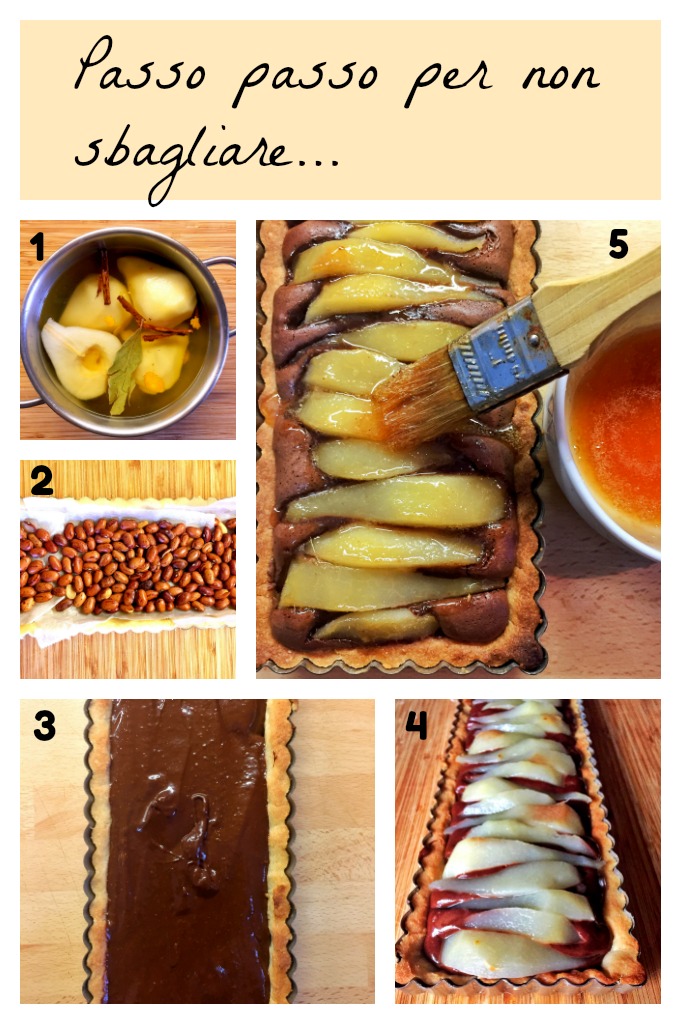 For the pastry. Put flour on the work surface 00 (double zero) and the almond. Add salt, cinnamon, sugar and cold butter cut into cubes. Begin to knead to a compound in large crumbs. Add the egg and continue kneading, to mix all the ingredients. You will need to obtain a smooth and homogenous. Wrap the dough in plastic wrap. Store in the refrigerator for at least an hour. I recommend you prepare the shortcrust pastry dough necessary to make pear and chocolate tart the night before, so as to find it ready.

Preheat the oven to 180 degrees static. Grease and flour the cake Pan you have chosen. Coat the bottom and edges of the cake maker with dough, taking care to spread to a thickness of between 3 and 5 mm. Prick the pastry base and bake for 20 minutes in white (i.e., covered with baking paper and some legumes inside, as you see in picture 2). After 20 minutes, remove from oven and allow to cool.

For baked pears. Peel the pears, cut them in half and place in a pan (photo 1). Cover with white wine. Add sugar, the cinnamon stick, the bay leaf, orange zest and lemon. Cook over medium heat for 10 minutes. Remove pears. Strain the cooking liquid and cook until the mixture is syrupy liquid tight, that will serve you for brushing the cake before serving.

Cut the pears into slices not too thin. Distribute them on the dough, making sure that sink slightly in the cream of chocolate (4 photos). Cook the pear tart and chocolate in oven at 180 degrees for 20 minutes. Let the cake cool. Brush the cake with the syrup of pears previously prepared (5 photos). Serve the tart with pears and warm or cold chocolate. Bon appétit!

MATCHING: Marsala Fine Rubino produced by Charles Cellars Pilgrim Marsala wine. A sweet wine that is fortified with brandy aged, that in combination with chocolate gives the best of itself, Thanks to intense aromas of ripe red fruit, like plum and cherry, united to warm sensations, soft, and a final round with light tannins that accompany the best tasting.

Good morning Ada I just can't believe it! How you prefer risottos, fish and sweets by the spoon but, I don't cook sweets because I prefer salty. Thinks I made my first tart The other day because L specifically asked me my daughter who is 18 years old . Well, your desserts made me want to try my hand at this category of recipes too. . I'll definitely try them. I also like the fact that you use dark chocolate I particularly love it even if the line does not allow me to eat it. A hug and see you soon. Ps congratulations for your site

Hello Gerardina, meanwhile thank you very much. I'm glad I made you want to make sweets.. I'm not my passion as a food but I really like to make them: I studied to succeed well and today create a beautiful and good dessert gives me a lot of satisfaction, I confess to you. I'm sure it will be the same for you.. A warm greeting, ADA

Dear Ada, Yesterday I made this tart nothing short of sumptuous. I was a guest of some friends that I made double dose: a delicacy. The pastry with perfect almonds in combination with the chocolate cream and pears, which are boiled and scented: in short, a triumph!
Again thank you and a hug from Padua
Luciana

I am very happy! Is’ one of my favorite tarts! And thank you so much for telling me, I need these messages and know that everything works well. Best wishes to the wonderful Padova. ADA

Beautiful your recipe, congratulations, revised gustosamente. Allow me a suggestion for any pastry: just kneaded put it to rest in the fridge already lying in the chosen mold: a step less and a great achievement, especially shortbread that must be cooked before in white like this.
Luciana

Hello Luciana, I always think I left it in the fridge before to be able to manipulate with ease dough and roll it out well. Then I also do a rest in the fridge once stretched the dough into the mold, sometimes they suggest in recipes when it is essential to, for rich butter dough, sometimes I do not say, but I always do. I will try to do as you say, Thanks!
ADA

HELLO ADA!!
MI HAI intrigued and tantalized..
I'll definitely try THIS TART luscious..
MATCHING I SEE YOU HAVE CHOSEN..
I HAVE TRIED THIS AND REALLY MARSALA AWAKEN THE SENSES..
SIN ONLY THAT I HAVE TO WAIT UNTIL SUMMER HOLIDAYS FOR REDO GALLEY AND HAVE A NEW WINTER GRANADINO.. SIP!!
IN THE LAST WEEK I ventured: PIZZA WITH LONG PROVING ( WHY MY BELOVED MOTHER HE HAS SUPPLIED OF FLOUR RIMACINO) AND it HAS BEEN A TRIUMPH.. SPANIARDS HAVE LIKED!!
E .. I HAVE TRIED EVEN crumbled WITH VARIATION OF COOKED CREAM – WHY DO I FIND HERE NN CHEESE MAY CONSIDER THIS IS QUE..
WITH REGARD TO THE PASTA crumbled I found a little DIFFICULTY BECAUSE MI RESULT TOO DRY.. I HAVE ADDED A YOLK IN MORE.. AND I HAVE THE LARD rose slightly..
It WAS ALSO A VERSION FRUCTOSE WHY MY STEPFATHER It DIABETIC AND I HAVE RECOMMENDED THIS TYPE OF REPLACEMENT AS SWEETENER. YOU SOME TIPS ON THE SUBJECT.. SWEETS FOR DIABETES IS A CHIMERA?
AN AFFECTIONATE GREETINGS
MARTINA

Hello Martina! Meanwhile, I apologize for the display but the site has crashed… the recipe you see however, but the display is a mess. To the crumbled, must be just a little’ dry, to ensure the dough crumbs, but you can add rather than egg yolk and a little lard’ of more liquor. As for sweets for diabetics, of puddings and creams and desserts you should use the liquid sweetener or technical devices such as the use of maltilolo or agave syrup. For leavened is more complicated, because sugar not only sweetens, but with its specific gravity gives consistency to the sweet… There are powders which replace the weight of sugar, Luke uses the very Montersino, I recommend reading one of his books on sweets without sugar, they are illuminating…

Thank you Martina, let me know how you feel! a warm greeting, ADA

Dear Ada! And how can we give this satisfaction? Only to see this tart asking you to be replicated!
Question: the Conference pears are equally well?
A hug and good weekend!
Antonella :-)

Hello Antonella! Thank you very much! It certainly is good, cuocile maybe a few minutes less because they are softer. Let me know! ADA

I think it's clear, classic pastry but with 240 grams of flour 00, 145 grams of cold butter and 30 grams of cocoa. Understand I realized, the result does not guarantee ;-)) but I'll let you know. Thanks as always!

The result will be perfect. Leave in the refrigerator so long stabilizes and the cold can work better. Be quiet and let me know!

Hello dear Ada that nice cake! Tomorrow I have to make a dinner for chocolaty people (in short, those who only eat chocolate cakes, lucky them…): you think I can add to this chocolate shortbread? and how much? Thanks! Silvia

Hello Silvia, then if you want to make a pastry with chocolate, I advise you not to prepare this almond but the traditional one that you find it BASES, removing 10 grams of flour and adding 30 and 20 of bitter cocoa butter. Let me know if everything is clear? ADA