Tart covered with pears and chocolate 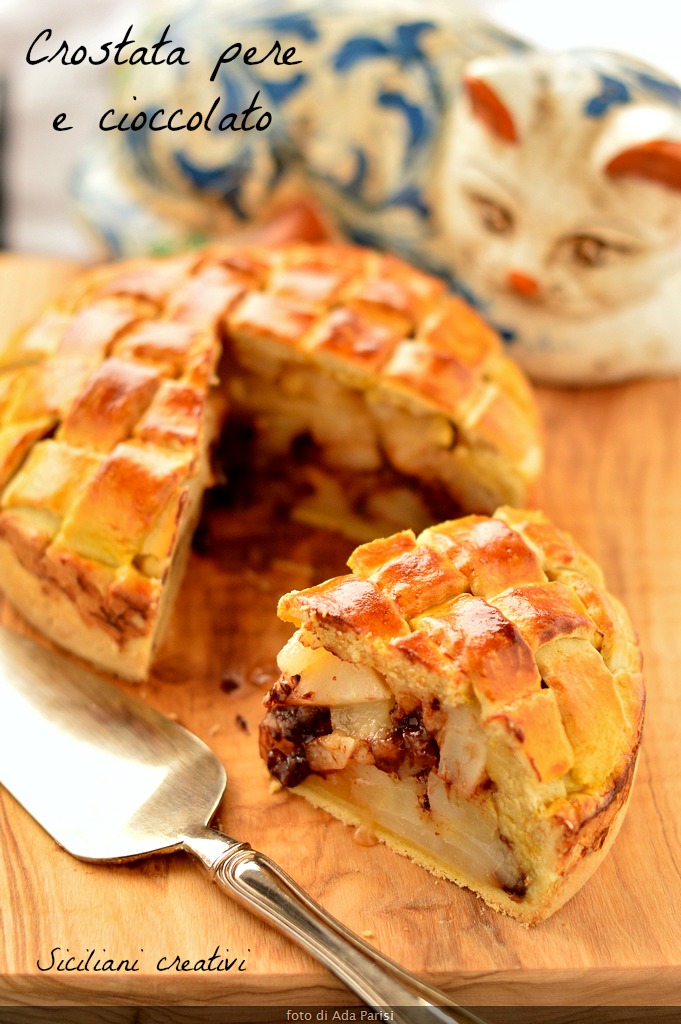 Tart covered with pears and chocolate: fruit is the real protagonist of this rich tart with an elegant basket cover. The basis is a sweet brisèe dough, the filling is composed only of pears first roasted in a pan, cut into large pieces so as to maintain a consistency sustained, almost crisp, cinnamon and lots of dark chocolate. Paramount, for a perfect pear and chocolate blanket tart, the variety of pears: must be pears tasty and consistent, not too ripe, like Williams. Do not use soft pears come apart, because you certainly do not want to end up in the pot loose and watery fruit! MI recommend, choose a tablet of high quality dark chocolate and with a minimum of 70% cocoa, so that it makes a nice contrast with lla sweetness of pears.

If the basket braided cover scare you, although it should not because on my YouTube Channel (subscribe, It is free and there are so many interesting content) You can find the VIDEO TUTORIAL FOR DECORATING THE PIES A STRAW, you can make traditional striped or smooth coverage: in this way you will prepare this dessert in no time, even in the case in which you would like to use the short pastry in place of the pastry crust. The pear tart and chocolate is a delicious sweet breakfast but, especially if the elegantly decorated, It is a perfect dessert after a meal if accompanied with vanilla ice cream or vanilla. In the cold months you can serve it warm, in summer cold. And also try all the other RECIPES DESSERT WITH PEARS. Have a good day! 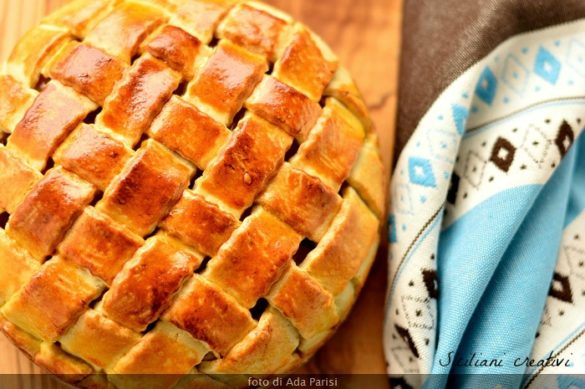 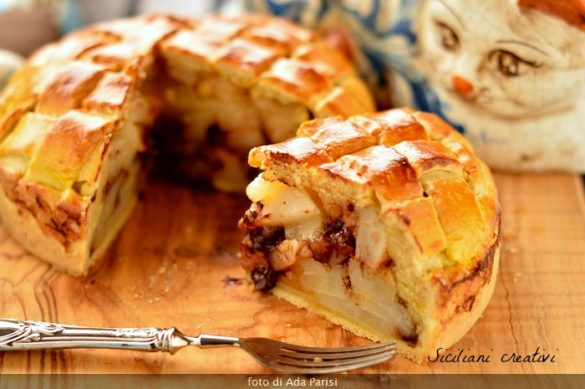 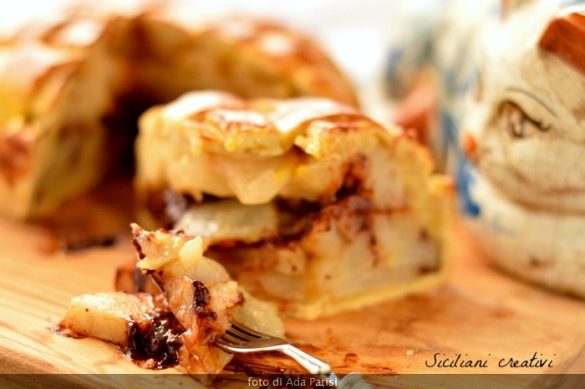 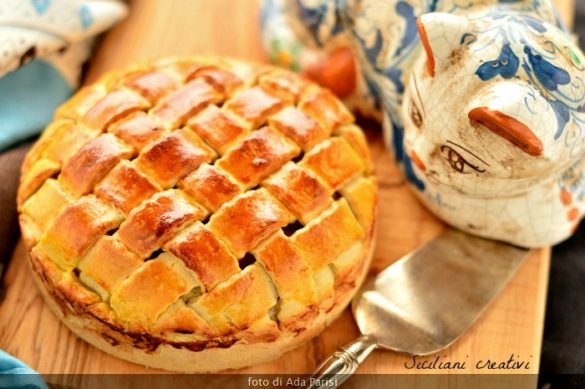 Doses for a cake of 18-20 centimeters in diameter

a tablespoon of apple cider vinegar or white wine

butter and flour for the cake Pan, to taste

the juice of half a lemon

an egg yolk and a little milk for brushing the cake 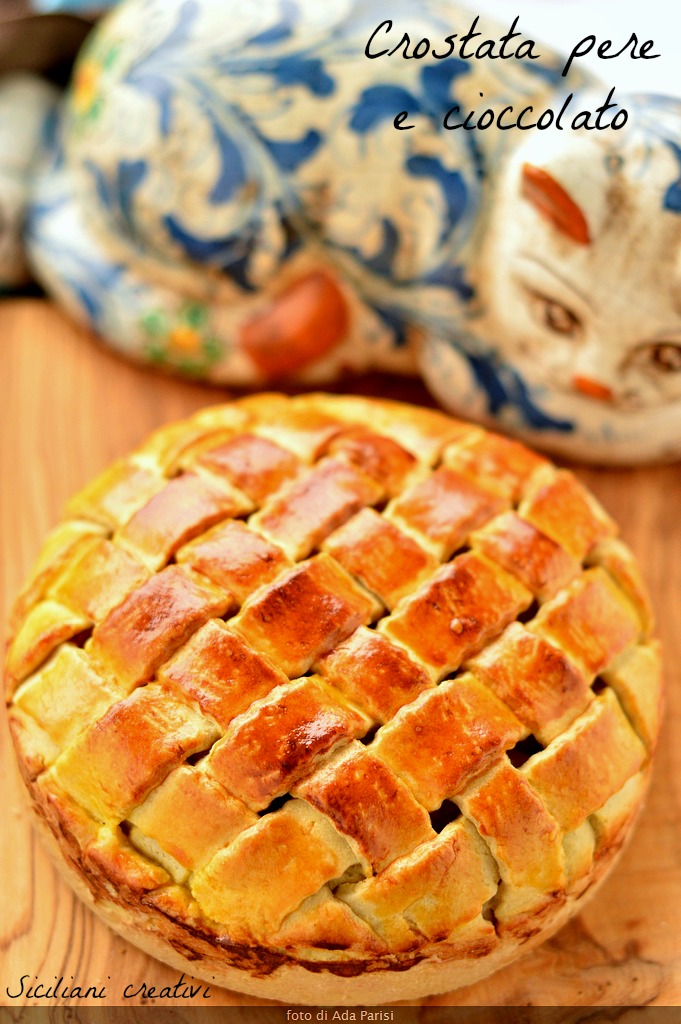 For the dough of the tart pears and chocolate, we start preparing the dough for the base of the tart: put the flour on the work surface, cold butter, diced, a pinch of cinnamon and a generous pinch of salt. Mix with your fingertips until the mixture is a large crumbs. Add vinegar and plenty of water as much as you need to get a consistent, smooth dough. Pour the water flush and knead and put no more unless absolutely essential, because the amount of water required varies with the flour used. Once you got your dough, wrap it in food film and store it in the refrigerator for at least an hour.

While the dough for the tart of pears and chocolate rests in the refrigerator, prepare the stuffing: Wash pears, Peel, cut-and-half and eliminate the central part and the seeds. Cut pears in not too small pieces. Melt the butter in a pan, join the pears cut into pieces and cinnamon and fry over high heat. When the pears are golden, add sugar and cook covered for 10 minutes. Finally, Dissolve the cornstarch in lemon juice and add this mixture to the pears. Mix carefully and continue cooking for another two minutes or until the possible cooking liquid of the peres has thickened. Put the pears in a bowl and let cool.

The pears are cold, grease and flour the cake tin, spread the tart dough on the work top in a thin pastry and coat the bottom and sides of the cake maker with dough. Prick the bottom with a fork and pour half of pears. Coarsely chop the chocolate and spread it over the pears. Cover with the remaining pears. For the tart coverage, if you want to make a canister cover as I did, watch the VIDEO TUTORIAL ON HOW to DO THE INTRECCI TO THE CROSTATE (and subscribe to my YOU TUBE CHANNEL).

If you prefer to cover the pie with a puff smooth, spread out the rest of the thin dough, rest it on the surface of the tart and tuck the flaps inside to seal them. Mix a yolk with two tablespoons of whole milk and brush with this mixture the entire surface of the tart.

Preheat the oven to 180 degrees and, When it is hot, Bake the tart for 45-50 minutes. Remove from oven and allow to cool tart pears and chocolate: this tart is very good both lukewarm both cold. I suggest you taste the pear tart and chocolate for breakfast, but also to accompanying dinner with ice cream, whipped cream or cream English. Bon appétit!

A treasure chest of goodness
Thanks
A big kiss

Thanks Elizabeth. This is one of the cakes for special occasions, especially if you want to go with it some good grappa of Trentino.