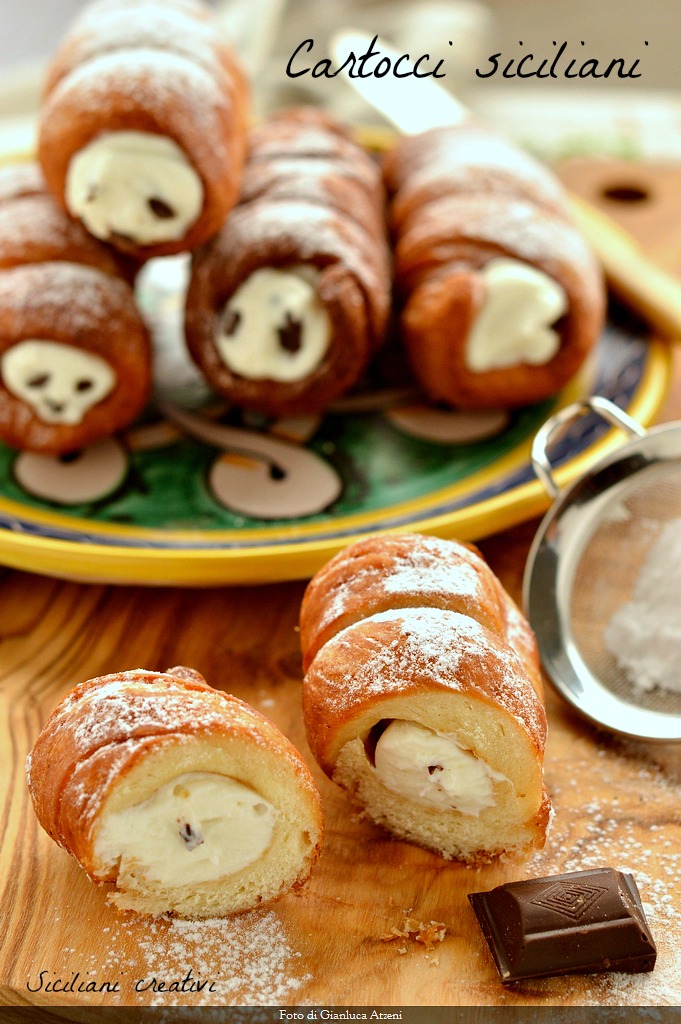 Fried Sicilian postcards with ricotta cheese, original recipe of the ancient Corsino pastry shop in Palazzolo Acreide. Probably, without seeing the photo, Sicilian who is not feeling only the name does not completely understand what it is. For those Sicilian, instead, i cartocci, also known as “Kalle” in Syracuse, I have a piece of the heart. This is yet another sweet Sicilian Baroque, obviously fried, like a sculpture and stuffed with ricotta cream, typical of the Carnival period. The Sicilian pastry is rich in fried and stuffed cakes in various ways, but especially with the ricotta (dates so a look at all my CAKES WITH CHEESE), such as buonissime Sfinci SAINT JOSEPH, which traditionally prepare for the festivities and dad in the Carnival period.

Each Sicilian province developed, next to traditional salt rotisserie, its own sweet rotisserie where there, other names, sweet like: in Palermo there are the parcels, a Siracusa i makallè, Messina these sweets are not shaped cannoli but PYTHON (which it is a typical of the messinese salt preparation), Fried, stuffed with ricotta and call “change”.

The recipe for the pastry cones of Corsino

The recipe that I present today is a real treat, because the original recipe Corsino Pasticceria Palazzolo Acreide, who will prepare the parcels for over 180 years. The dough is leavened, with lard (irreplaceable), milk, Brewer's yeast, sugar. Once you make the first rising, the dough is twisted on the same rods that are used to make cannoli. After a new rising, the sea you fry in oil seeds Peanut (once used lard, let us not miss anything) and, When cold, It is stuffing it with the cream cheese and sprinkle with granulated sugar, or it is covered with icing sugar.

In Sicily, the cones are a typical sweet breakfast, some’ come i krapfen. But this does not preclude you do snack mid-morning with a ARANCINO and that you eat a nice lunch PASTA WITH STANDARD. In short, Life in Sicily is really hard. Is, If you prepare the Sicilians cones for Carnival, have a look at all my REGIONAL DESSERT RECIPES FOR CARNIVAL, and have a good day! Have a good day! 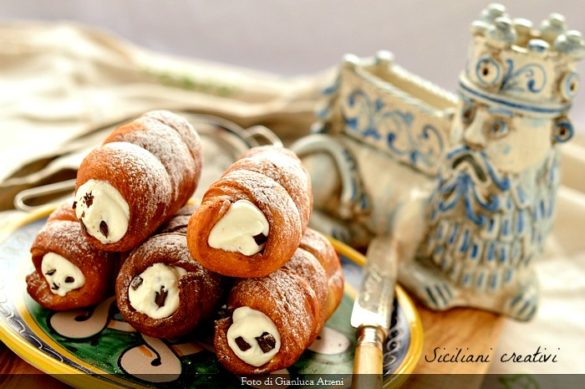 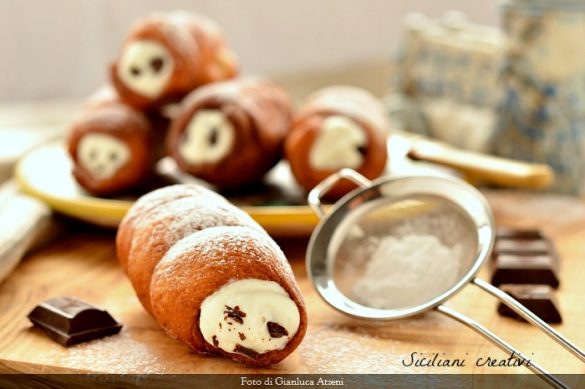 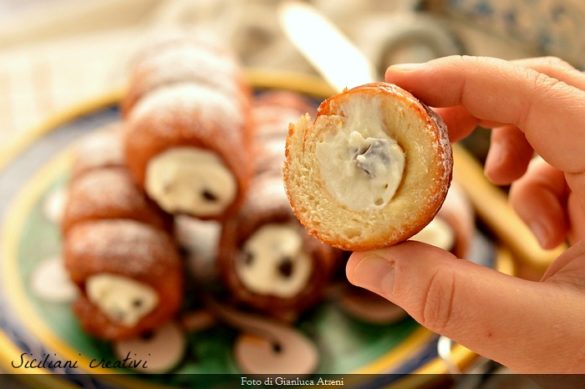 FOR MIXING OF BLASTING: 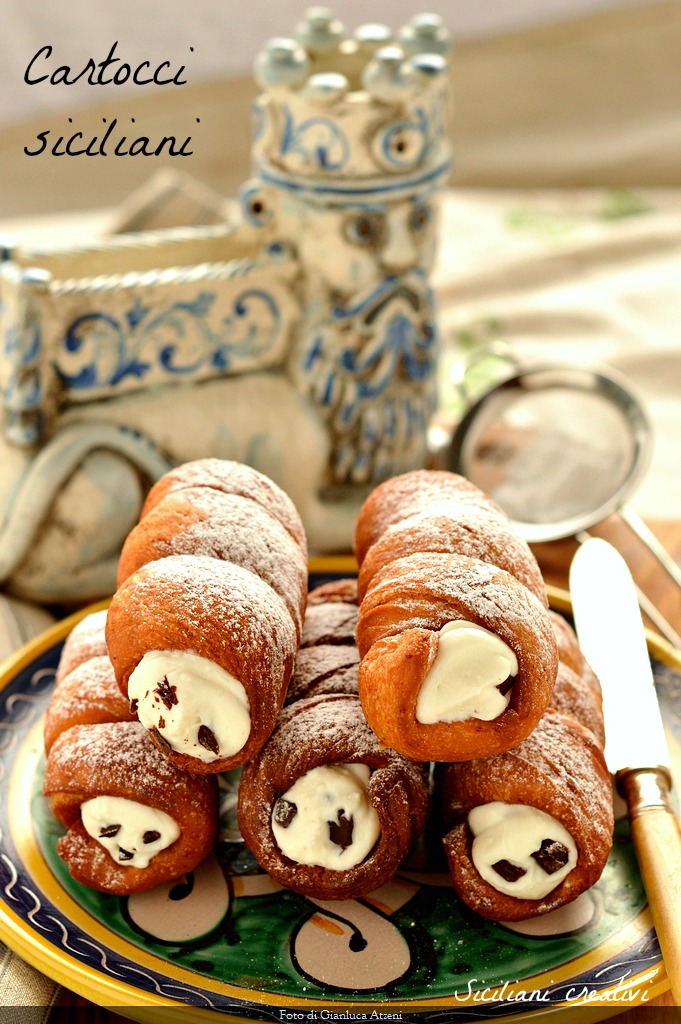 The dough for Sicilian postcards can be prepared by hand or with the use of the planetarium. Because it is a very hard and not sticky dough. Gently heat the milk: to be warm. The work plan, put the flour, the dry yeast (or the fresh crumbled), sugar, salt and lard. Begin to knead, slowly adding the warm milk, to encompass all the liquid to the dry ingredients.

You must work the sicilian postcard dough vigorously for at least 10-15 minutes. Work up to obtain a smooth dough, soft and smooth. Grease a bowl with lard. Put the dough inside the bowl. Cover with plastic wrap (in contact) and let rise in a warm environment, at a temperature of at least 28 degrees, for at least three hours or until the dough has doubled its volume. You can put the bowl in the oven with the light turned on, and 28 builds.

When the dough has doubled, divide it into portions of about 50 grams. From each portion, obtain cords (as you see in the picture). Take the metal rods that are used to make cannoli, grease the rods with a little lard. Roll up the dough portions on the rods, taking care to slightly overlap the flaps of the dough (otherwise you could pull in cooking). This way you format the cones. Cover with plastic wrap. Place the cones in the oven to rise (with the light, 26-28 and Builds), until it doubles in volume. 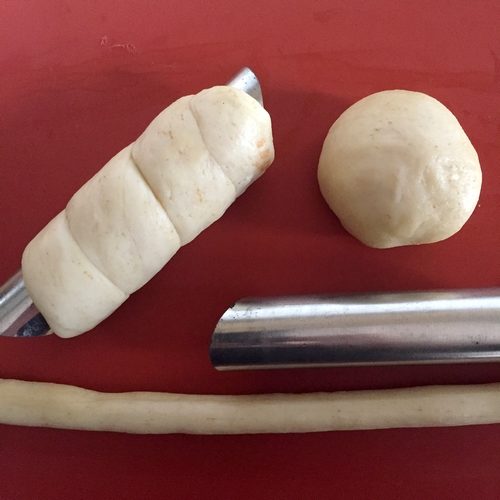 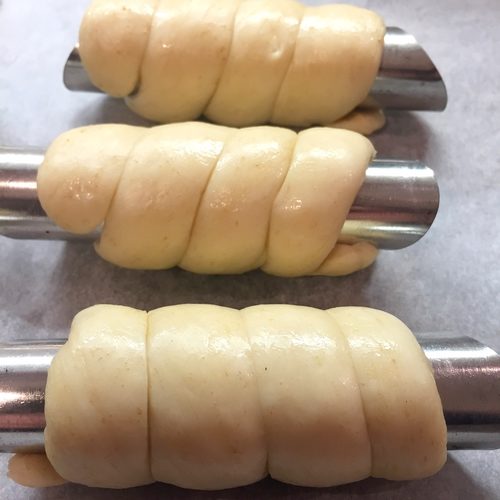 During the rise of the cones, prepare the cream cheese. If the cheese is not quite dry, We have to leave a few hours in the refrigerator, in a colander, so that you lose the excess liquid. Mix the ricotta with a spoon. Pass the ricotta through a sieve twice, up to obtain a cream without lumps. Add the granulated sugar and mix well. Combine the chocolate chips or chopped chocolate. Place the cream cheese and chocolate in the refrigerator.

When the dough for the postcards is doubled, you have to fry the parcels. They go fried one or two at a time. Use peanut oil for frying, which it must be made in a broad and deep pan (it's good wok) at a temperature of 165 degrees. The cones will be puffy and golden brown on both sides. Remove the postcards from the boiling oil and put them to cool on the absorbent paper. When they are tepid, gently pull it out from the barrels. Fill the inside of the cones with the ricotta cream, using a pastry bag. Sprinkle with icing sugar. If you prefer a sweeter taste, you can pass the Sicilian cones in granulated sugar and then stuff them with cream cheese. And now enjoy your meal!

MATCHING: Marsala top Gold, produced by Cantine Pellegrino. For this recipe made with ricotta, the character around Sicily, We suggest you combine a historical wine of this island: Marsala wine. Le Cantine Pellegrino are among the leading exponents of this tradition. This Marsala, obtained from grapes Grillo, Catarratto e Inzolia, refines more than two years in oak barrels and four months in bottle. It is produced with the addition of aquavite, aged for at least five years. It smells like honey, Melon and medlar; its taste is soft, sweet, with dried apricot notes. Serve chilled, at a temperature of about 12 degrees.

Hi Ada :)
that delizzia!!…absolutely fantastic :)
by chance and possibbile change lard for something else ?…10 months ago’ i became a vegetarian so pultroppo i can't use lard :(
Thanks Ada
Alexander :)

But the butter you can use it?If the answer is yes then we have solved! One kiss, ADA

Perfect, Also I'm curious to know how it is with butter, keep me posted. ADA

Super delicious to replicate definitely
Thanks
A big kiss