Side dish or delicious appetizer 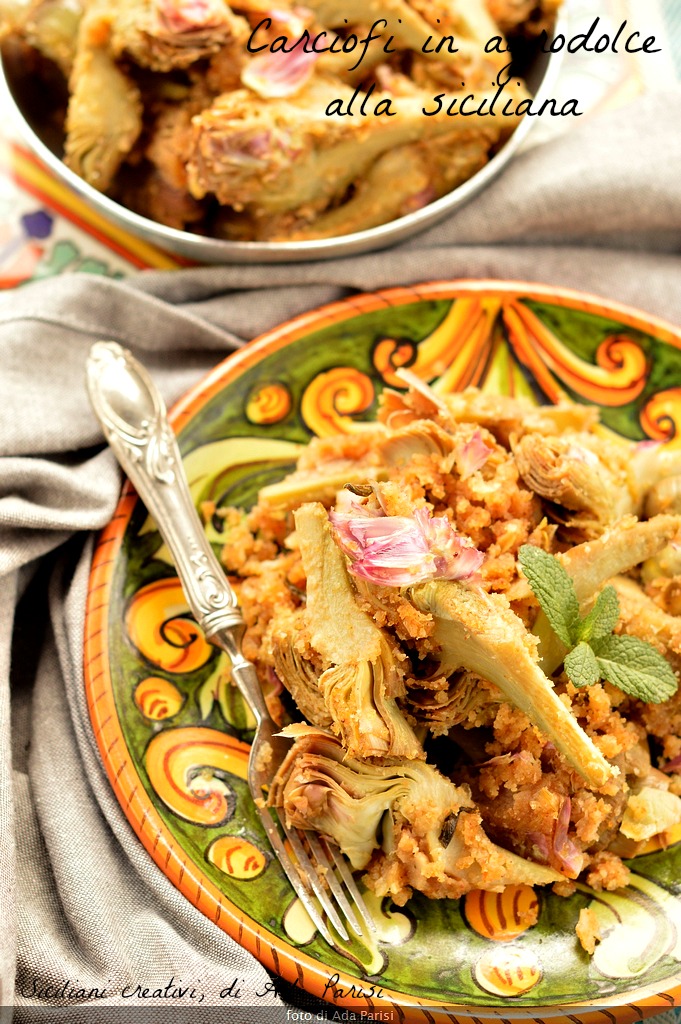 Did you think sweet and sour recipes were over? Absolutely no. Today I leave another family recipe, beloved by me: the artichokes and sour Sicilian. We call them 'ammuddicati' artichokes: means topped with crumbs of stale bread. A poor seasoning typical of Sicilian cuisine (which is also found in Puglia and Calabria) that usually is used in first courses such as PASTA WITH SARDINES or the PASTA WITH CAULIFLOWER IN RED. In this case, the breadcrumbs is used to season the artichokes sweet and sour (you have tried all my RECIPES SOUR?).

The toasted breadcrumbs it tempers the vinegar-based sauce and sugar and softens slightly, assuming an original and intense taste. The artichokes and sour Sicilian style are a perfect side dish both for meat and for fish and should be prepared in advance, like all the dishes sweet and sour, so the flavors have time to blend. I also like to put a little’ fresh mint, I love you with artichokes. My mother, which it is more conservative, do not put. If you want to try somewhere else RECIPE WITH ARTICHOKES, how tempting ARTICHOKES STUFFED IN SICILIEN STYLE, have a look and let groped.

This is a recipe (Vegan) simple and for us it is inevitable over the Christmas and New Year menu: She prepared her grandmother, Palermo. I give you one advice, passed down from generations: attention to cooking the artichokes. Do not cook them too much because they remain crunchy and have a bright color. Now I leave you to browse through all my CHRISTMAS RECIPES and my SICILIAN RECIPES and I wish you good day. 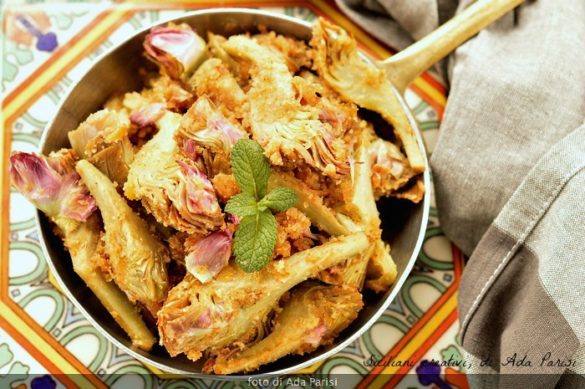 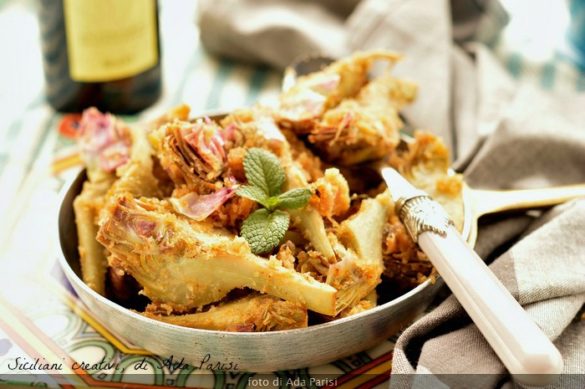 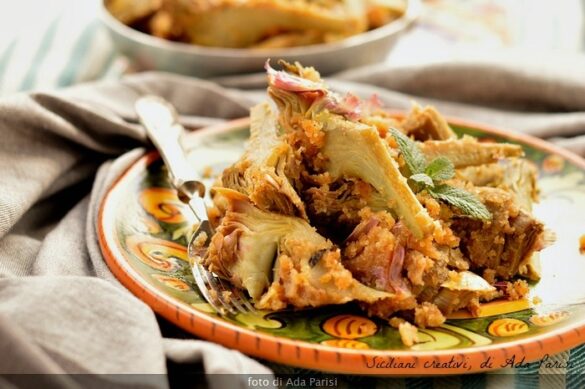 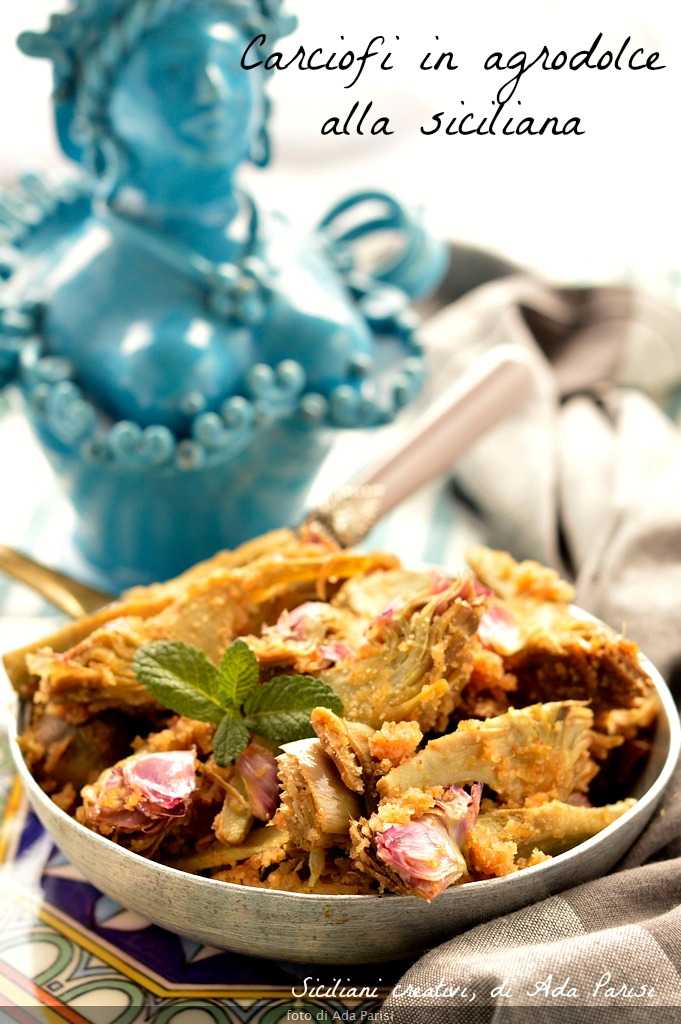 Clean the artichokes by removing the outer leaves, the hardest part of the stem and the internal beard. Put the artichokes to soak in a large bowl with cold water acidulated with the juice of one lemon.

Finely chop the onion. Brown the onion in olive oil and a little hot water until it will become translucent. Cut the artichokes into wedges: if they are small artichokes, slice them into four segments, if they are large artichokes, into six parts.

When the onion is translucent, add the artichokes without drain too. Season with salt and brown carefully so that you soak the artichokes in olive oil. Cover and cook over medium-low heat for 10 minutes, stirring every now and then and making sure that the condensation that forms inside the lid falls on the artichokes, so keep them moist. 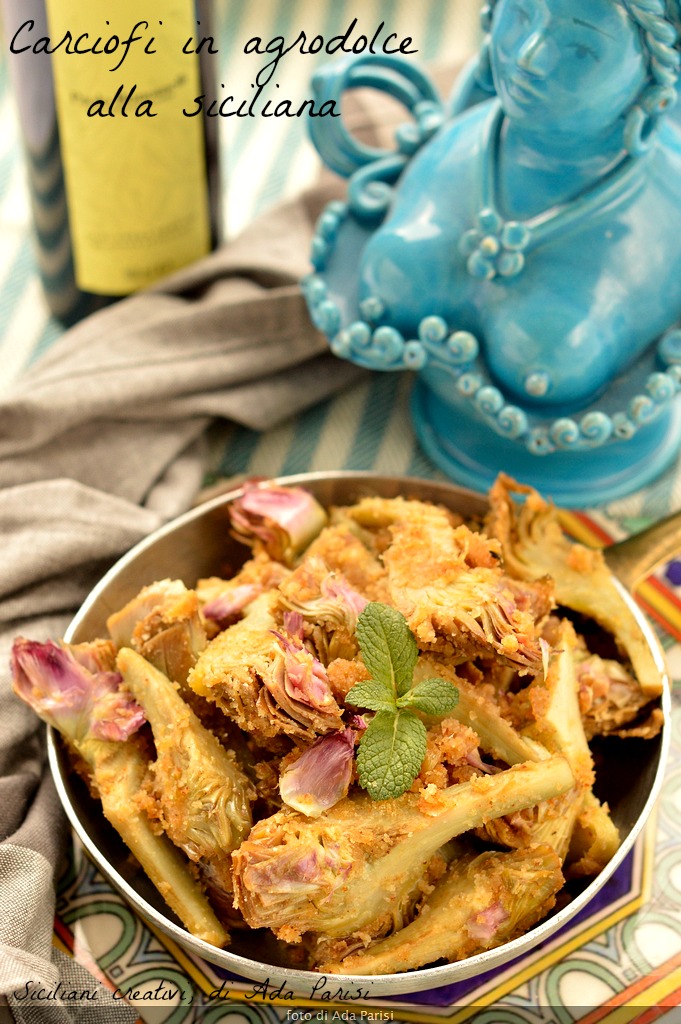 Put the artichokes in a pan and let cool completely. The artichokes and sour Sicilian will serve strictly cold and you have to prepare at least six hours (better a full day) in advance. Bon appétit!

You can keep the artichokes sweet and sour Sicilian refrigerated, covered by for food in contact film, for 3 days.

MATCHING: Birra Messina Salt crystals, produced by the multinational Heineken, after an agreement with the brewery Messina. A lager not filtrada, golden color, with aromas of spices and citrus, persistent and soft foam, enriched by salt crystals of Sicily. From serve around 6 degrees of temperature.