Eggplant caponata with rolls of sea bass and endive 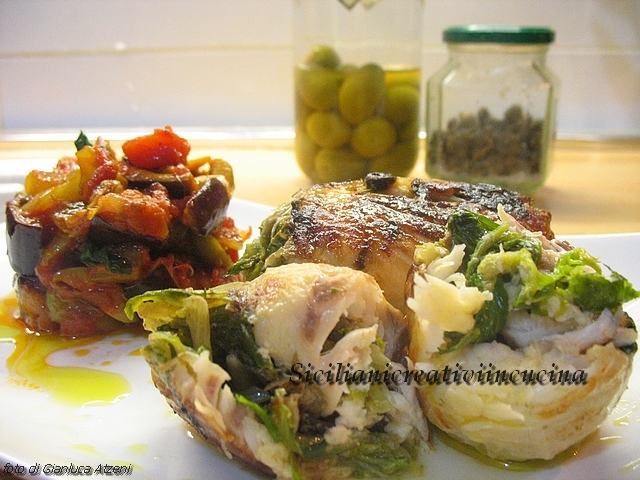 Eggplant caponata with rolls of sea bass and endive. A dish that is half traditional and half invention: the caponata is to family. A different version from the many Ratatouille that are eaten in Sicily and not only: in our there are only onion, Capers, green olives in brine, chopped tomato, celery and fried eggplant. Hearty red vinegar spray indispensable ben sweetened. The spring rolls instead invented them for this recipe: fillets of sea bass (or bream or fish flag…) stuffed with a filling absolutely siciliano. Escarole, pine nuts, capers and raisins.

for the fish rolls

First prepare the caponata: wash the eggplants and remove the tail, and the initial. Cut into slices about one centimeter and a half and then into cubes of about one centimeter. Season with salt and FRY in abundant boiling oil over medium heat, taking care to turn them every now and then: When are fries put them on paper towels to remove excess oil. Slice the onion and chopped coarse of about half a centimetre celery. Put celery and onion in a pan with 6 tablespoons oil and Cook, over medium heat, until the vegetables become translucent, for approximately 7-10 minutes. Add olives and capers and then the tomato. Season with salt. Cook 5 minutes. In a glass mix vinegar and sugar, so that it melts completely: turn up the heat in the vegetables and pour the vinegar sweetened. Leave Deglaze and add the fried eggplant. Put on a plate and allow to cool. While the caponata bakes, prepare the rolls: wash the Escarole and discard the outer leaves, the tail and the green parts of the Summit. Leave to simmer in a pan with a little oil, the raisins, the chopped capers and pine nuts. Should cook over low heat for about 5 minutes, time to wilt slightly. Grease with very little oil the fillets of sea bass and set them on a sheet of parchment paper: put on each fillet and roll it a little on himself. Then wrap it in wax paper by turning the ends to seal the fish until the ' candy ' effect. Put in a pan a little oil and fish rolls wrapped in parchment paper: Cook, turning them from time to time, for approximately 5-7 minutes. Serve the rolls of sea bass with Eggplant caponata.

THE PAIRING: this dish with extremely complex flavors deserves a white wine. We chose a Sauvignon Colli Piacentini of Tenuta la Torretta, history of the place. Is’ a wine with hints of flowers and plants, slightly sparkling, It should be drunk cool (9-10°) and young.

ADA, I thought I had trawled everywhere in your blog but, perhaps lost among the flavors that your dishes evoke and more prosaically among various lists various expenditure for testing of various days of the week (There are those in which there is little time, on Saturday and Sunday, rather than have it in abundance for sweets), I had lost this. And think that I was just going to ask you this one thing.. but a caponata, No?.. ehehe..
And I don't know if now I wait they get seasonal Eggplant…

Silvia we're almost to the Eggplant! Already peek out, wait another two weeks and go quiet!!! A hug, ADA

I saw this recipe about a month ago to Gambero Rosso and try it tomorrow for my husband, instead of bass workin fo me the spatula and without caponata, It's not season!I'll know,
Simona

Hello Simona! The original recipe was right with the spatula, but that day wasn't available in pescheria. And do well not to make the caponata, It's not season. If you want to pair it to something sweet and sour sauce, I would suggest you try the sweet and sour pumpkin, perfectly complements the slight bitterness of Escarole. Let me know! ADA

Excuse me but this is the true copy of the recipe made from a maiden whose name I can't remember, in Francesca Barberini “This I did it” Gambero Rosso.
Excuse me but you haven't invented anything.

Hello!!! Thank you for defending the property of my recipe: It's me, ADA, the maiden who did the red shrimp make the caponata with sea bass rolls…I hope the blog you like and you'll continue to follow us. PS. Since I haven't seen the episode because I have no Sky, out of curiosity, How do you I look? :-)

Wonderful also this dish!!! Brava, I'm also here to invite you to my first contest, I await your recipe!
http://cocomerorosso.blogspot.it/2013/03/di-cucina-in-cucina-sfida-di-marzo.html

Thanks Mariangela!!! As always too good!!! I watch your contest and I gear…a hug….

How I love this recipe! I love the fish though here
in Lombardia miss some’ the tradition….. and we can't compete with you….. but I can always improve following…..
Bye

Thanks!!!! The sea bass is not a typical Sicilian fish much, I'm sure you'll be fine…and then I read…I lived seven years in Milan and I love the Lombard culinary tradition…