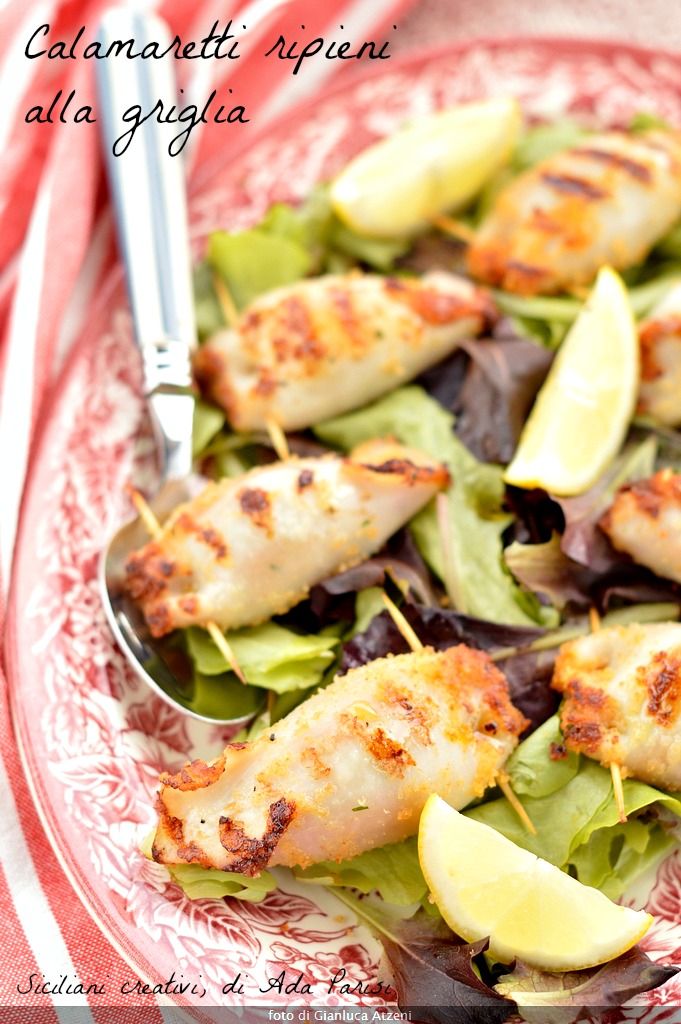 Today's recipe is reserved for seafood lovers: grilled stuffed squid, one of the second most loved fish Sicilian cuisine. And that the recipe is Sicilian, you can tell immediately from the use of pecorino canestrato Dop and capers inside the stuffing, which is made with poor ingredients. The tails of squid fried in a pan, old bread, parsley, some cherry tomatoes, zest of lemon and of course extra virgin olive oil. To prepare grilled stuffed calamari I used the very small squid. And honestly I did a little’ Fatigue in the filling operations, although the taste and softness of small squid are unbeatable.

If you prefer, You can also use larger sized squid, obviously preparing the stuffing and cooking them longer over low heat. In Sicily stuffed calamari is traditionally prepared on the grill, and the taste of cooking over high heat is another thing: if you are lucky enough to have a barbecue, seasonal suggest you try this type of cooking. As an alternative to grid, you can cook the squid stuffed baked, static 200 degrees for 15 minutes and then 5 minutes depending on grill. Serve stuffed squid grilled Sicilian spraying with olive oil and lemon juice and feel the taste of sea. If you like, I hope, Sicilian cuisine, Also have a look at all my RECIPES WITH SQUIDS and in general to SICILIAN RECIPES. Have a good day. 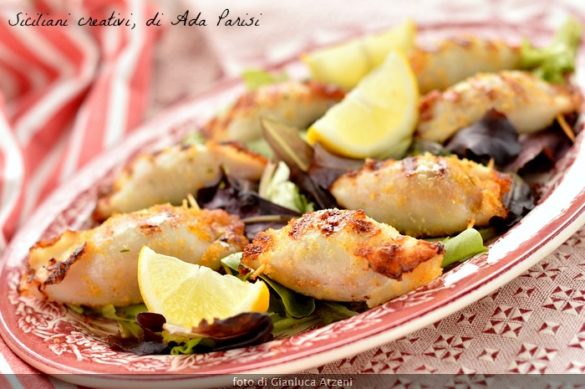 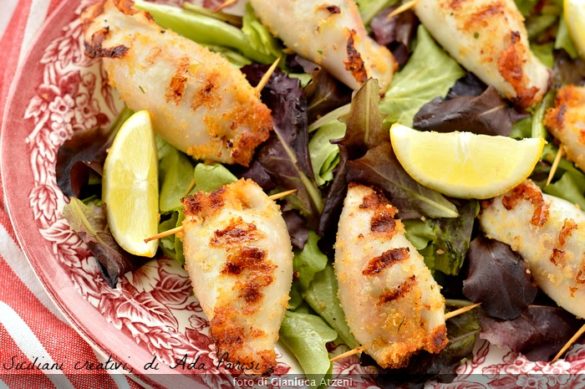 800 grams of squid or a pound of squid, (I refer you to this video as cleaning the squid)
200 grams of bread crumbs
parsley, to taste
a small piece of onion or shallot
4-5 tomatoes Piccadilly
salt and pepper, to taste
extra virgin olive oil, to taste
grated rind of one lemon organic
40 grams of pecorino DOP Sicilian canestrato
a handful of capers 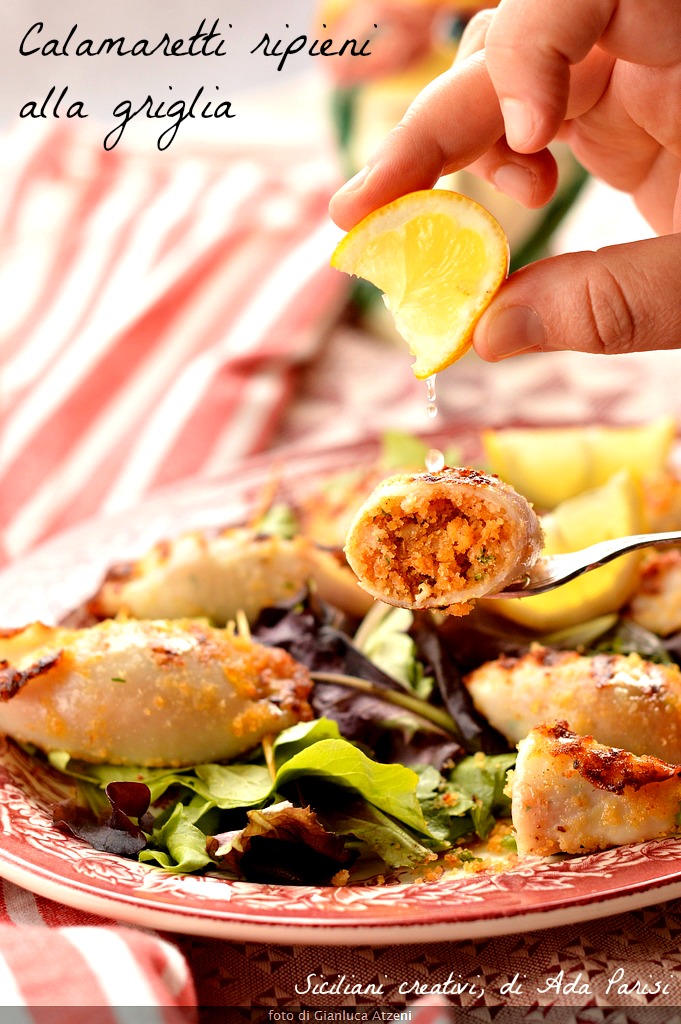 To prepare the stuffed squid to broil need, first of all, clean squid, putting aside the queues that will be needed for the filling. I refer to this video on as cleaning the squid. After cleaning the fish, finely chopped with a knife pigtails. Clean and finely chop the onion or shallot. Brown the onion in a pan in olive oil, then add the chopped tails of squid. Season with salt and cook for 5 minutes. Allow to cool.

Peel the tomatoes and cut them into very small pieces, preserving the water of vegetation. Finely chop the parsley and capers. Place in a bowl the breadcrumbs, pecorino, parsley, Capers, tomatoes with vegetation water, grated lemon rind. Combine the tails of squid, a little salt and black pepper. Add to the mixture as much oil as needed to obtain a soft but grainy filling. I normally use about 50 milliliters of olive oil and add, in addition to the water of tomatoes, even one or two tablespoons of water if I see that the mixture is a little too dry. Try anyway to see if the filling is properly savory. 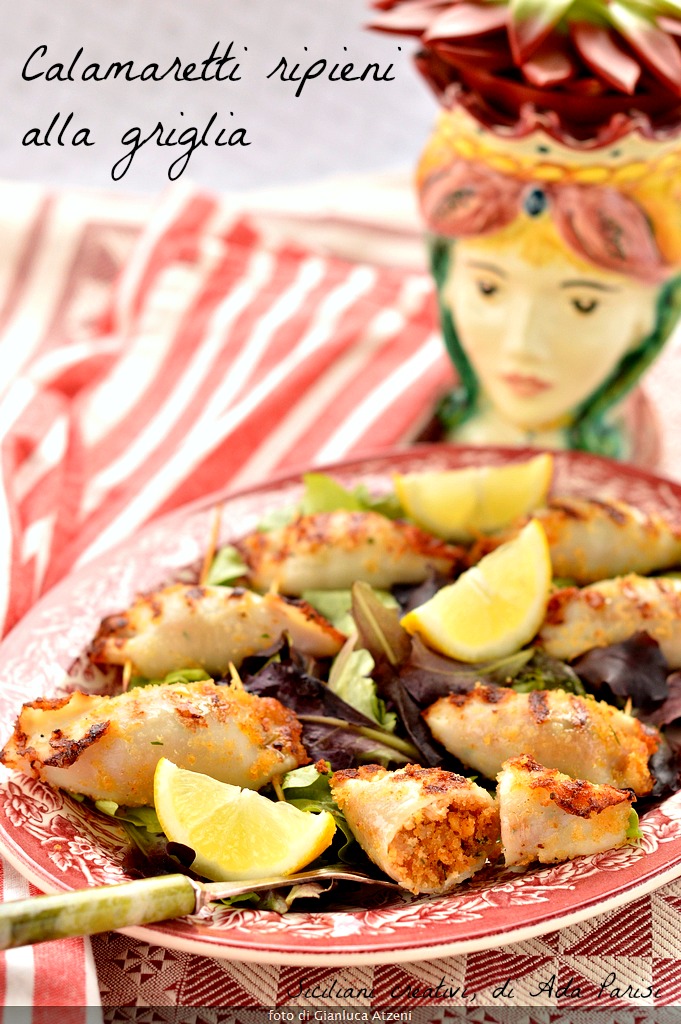 Stuff the squid with the mixture using a spoon: not excessively pressed the filling, otherwise when swell in cooking squid will split, and let about one centimeter of free space to be able to close the flaps of the squid with a skewer, so that they do not open during cooking. Grease squid with olive oil and grigliarli on already hot cast iron grill, over low heat, for a few minutes. Turn the squid and cook them on the other side.

Mushroom soup: the scent that...

They have become the favorite dish of my daughter fish. Hello, ADA

A great honor Ferdinando, Thanks. A hug to you both, ADA

Again thanks Ferdinando, let me know if you try them

Perfect for lunch
Thanks
A big kiss

Let me know if you try it