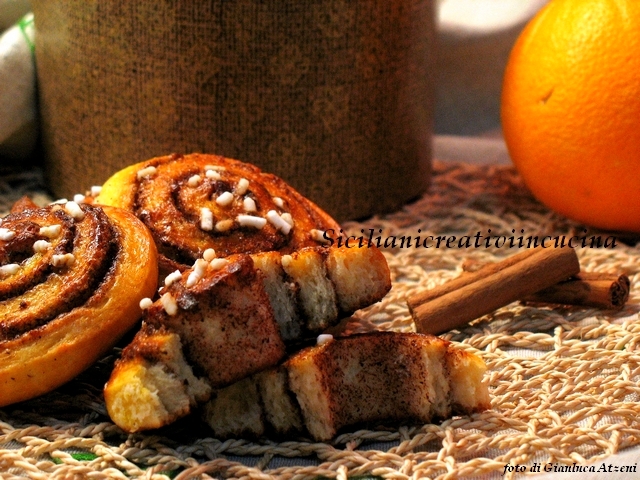 Now the Swedish cinnamon buns have become a global sweet, and because Ikea has made them forcefully enter the homes of all Italians, both for their undoubted goodness. A little’ like the HOT CROSS BUNS, the Anglo-Saxon sweet rolls that are traditionally eaten at Easter.

I leave the original recipe of cinnamon rolls, prepared using, however, a strong flour (manitoba) and very little yeast. So, I left to rise for a long time the dough and also also increased slightly’ the dose of sugar, because I know that at home they love pretty sweet desserts. I decreased slightly the amount of butter in the filling, because I like a little’ less fat and added to stuffing the orange peel in my opinion with the cinnamon and cardamom goes well and gives these pastries an even Christmas aroma. I must admit I am delicious: I made the full dose and frozen breakfast pastries I countless future!

In addition, if you'd want to try your hand with breakfast brioche, I can not advise you to try one of the emblems of Sicily: the BRIOCHES COL Tuppo SICILY. And if you're greedy like me, adorerete the BRIOCHES VENETIAN WITH PASTRY CREAM. Have a good day!

half a teaspoon of salt 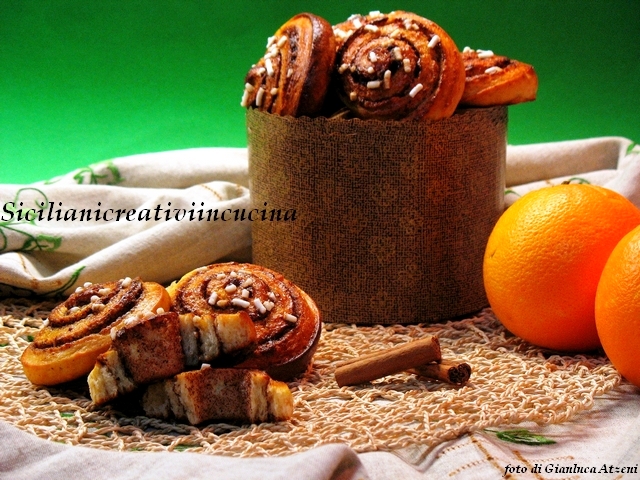 Per preparare i cinnamon rolls, Swedish cinnamon brioche, We must first dissolve the yeast in a little warm milk (not warm!). Put everything in the platenaria using the kneaders, and add the sugar, the malt, the butter, Salt, the cardamom powder and flour, mix everything with the hook until mixture is smooth, smooth, shiny and elastic. It will take about 15 minutes at low speed. Let the dough rest until the volume doubles in a lightly ated bowl of butter and covered with a food film so that it does not crush the dough: I did it rise 5 hours in a room with heating, then at about 25 degrees. When the dough is well leavened, deflate it and spread it out with a rolling pin on a lightly floured surface into two rectangles (I say two because if you follow these doses the dough will be quite) about half a centimeter thick.

Work the butter and sugar in a bowl, cinnamon and orange zest so as to obtain a cream and carefully spread it over the entire surface of the rectangles up to about one centimeter from the edge. Roll them tight on themselves on the long side and cut of 2 cm thick swivels. Coat two or three baking sheets with parchment paper and arrange over the brioche cinnamon. You must have the cinnamon rolls well spaced, because with the increase of volume leavening. Cover with food film and let rise at least an hour (I 2 hours) always in a warm place.

Preheat the oven to 180 degrees static. Whisk the egg yolks in a bowl with the cream mixture and brush with the cinnamon brioche, then garnish with sprinkles and bake for 8 minutes, then move on for 2 minutes at breezy function so that the cinnamon rolls remain clearly golden. Remove from oven and serve still warm brioche cinnamon. The cinnamon rolls you can safely freeze and heat in a 100 degree oven for breakfast. Bon appétit!

And who said that the panettone should necessarily be round?!
ADA, they are spectacularly, only seen is Christmas already! Cinnamon, the orange peel and then cardamom… They'll look everywhere just to try them!
Hello and happy Sunday!
Antonella

Antonella thanks! I adore and really were almost made for Christmas: the scent of cardamom, cinnamon and orange called it just a nice vin Brulee…Will you let me know how to find them? A dear greeting. ADA

Hi Ada…I don't want to seem precisina but in fact named KANEL BULLAR BAKING TIN……I know I have been there 3 years percho in Stockholm . big kiss

Hi Silvana, Yes the Swedish name is what you say. For re-cake we decided to use that English, a language more ' spread ', but of course the original name is kanel bullar baking Tin. Kisses to you, ADA

Where you find the malt?

Hello Daniela, the malt is in specialty stores like Eataly or in large supermarkets. You can easily replace with a teaspoon of honey, that is the same as. ADA

in the chaos of the holidays I had lost your cinnamon rolls, I really like the Orange flavor in the stuffing, see you soon and happy new year

Ciao Miria, Imagine! I'm lost alone between one thing and another! Orange is my sicilian touch :-) happy dear year!

ADA, are beautiful and fragrant… What beautiful photos, As always! A bascione!

Hi Patti! EH, for photos step compliments to Gianluca and, While we are, I'm going to grab a croissant passing through the kitchen! A hug, ADA

That balili, I adoroo! As soon as I get my hands on her in the kitchen and then fionderò me cardamom, SI salvi chi può! Other than line!
Bellisima the idea of orange :D as big and good as ever Ada!

Viviana! Good to see you here, at worst you mention and the cardamom I'm sending I! A big hug! ADA

Bravissima Ada un panettone sui generis ;)
I also find that the peel of the orange with the cinnamon is a combination perfectly timed.
See you soon!!!
Hello, Silvia.

Hello Silvia! The idea of the photo is a little’ to play with the idea of panettone :-) I love orange zest, put it anywhere!

Thanks Serena! I had many advanced panettone molds… from which one understands that the cake is not my forte… :-)

Hi Ada, nice idea the Orange , the next time I try too,because you certainly do are really good.

Hi Anna! You will try the Orange and I on Christmas Hat! A hug, ADA

I really like the orange in the filling!
And beautiful picture!!!!
See you at the next king cake!!!
Hello

Hello Elisa… the photo is not me, the Orange though Yes and in my opinion a more festive note! A hug, ADA