Baron of Villagrande: cellar, Quality Inn and resort in Milo

MILO is a small village on the slopes of Mount Etna and, with its 750 meters, is one of the countries situated higher up around the volcano. In a position overlooking the spectacular Amphitheater of Valle del Bove, MILO is locked between Woods and vineyards and here, Despite the heat overdone this summer 2017 that I will long remember, I found a little’ cool and refreshing. Today we speak of a company here in Milo she grew up watching Etna: the seals “Baron of Villagrande“, old Winery cultivates vineyards from 1727. Ten generations of experience, Today the company is run by Marco Nicolosi, young winemaker and Director of cellar, heir of Nagaraj which almost three hundred years ago obtained the title of Baron of Villagrande by Emperor Charles VI of Austria, then King of Naples. At his side, There is his wife, the tireless Barbara Liuzzo, in the role of head of marketing. Today Baron of Villagrande is a beautiful Winery into one of the Territories most suitable (and the most famous) of Sicily, but not only: It is also wine resort and restaurant, all born recovering ancient structures of family, with a look at the new but without betraying the past. 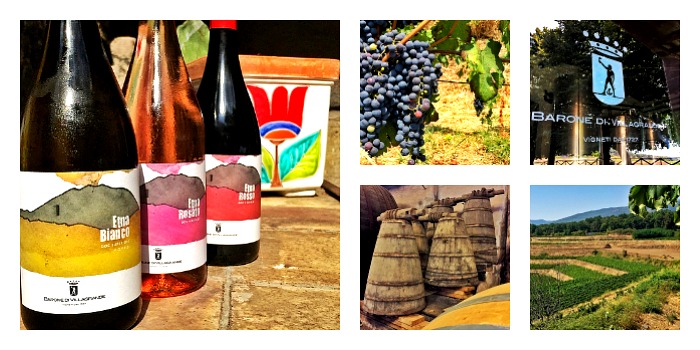 LA CANTINA – The Barone di Villagrande (Villagrande is the name of contrada di Milo) It covers 25 hectares, 18 of which are vineyards. This Sicilian enterprise has made the history of Etna Doc. In 1968, Carlo Nicolosi Asmundo, Marco's father, was among those who wrote the product specification. The company philosophy is to safeguard biodiversity etnea (you know about a hundred different varieties of grapes), through the enhancement of wines from indigenous varieties, like the Nerello Mascalese, Nerello Cappuccio, the Carricante, the Encased, the Minnella. Seven labels produced, two of which come from vineyards on the island of Salina, in the Aeolian archipelago. From 1989, the company is certified under organic management regime. The current rises in the ancient wine cellar.

La cantina, on the old Winery, can be visited by reservation: inside there are still some impressive 22000 liters capacity each barrels, built 200 years ago in chestnut wood etneo, particularly suitable for storing wine and able to confer the unique hints. The barrels were built on site before the construction of the walls of the cellar. Today Marco and Barbara chose to continue along this road and thus also the newer barrels are made of the same wood chestnut of Etna by Sicilian companies (company Li Causi, Marsala). the wood, before being used for wine, outdoor is aged for five years so as to eliminate as much as possible the tannins from wood. Overall, Baron of Villagrande produces on average between 70000 and 80000 bottles every year, of which 4000 produced on the island of Salina. From 1850 to today, the production of wine of this winery has never been interrupted, not even during the two world wars. 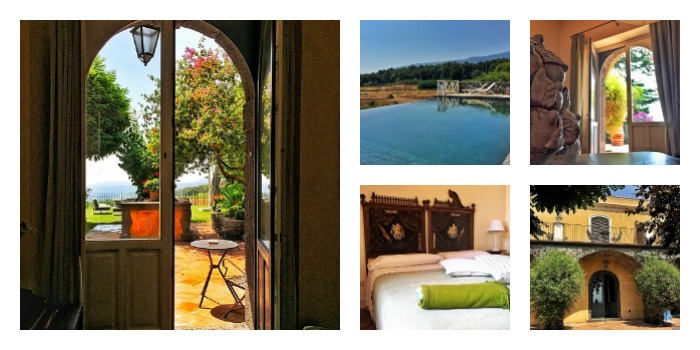 THE WINE RESORT – Baron of Villagrande is also a “wine resort”. Four rooms (from 150 to 195 euros per night per room, Open from April to October), overlooking the vineyards and housed in the old mansion of family, built with bricks made of lava stone. Elegant and furnished in rustic style, rich in Sicilian ceramics, they are surrounded by a garden with a cedar of Lebanon planted in 1904. An infinity pool in lava, completes the picture. Immersed in the waters of this rooftop pool you can see the top of Etna, on the other, the sea and the Gulf of Catania with a view to the tip of Calabria. I wanted to dive and stay there at least for a week. Both the wine resort is the restaurant closed from November to March, in order to leave a mark and Barbara time to dedicate themselves to the commitments of the cellar, adapting to the times of the wine.

The company employs 22 employees, also committed to care for an organic garden and a corner dedicated to herbs (with 25 different types) that allows the company to be virtually self-sufficient. Even the olive oil is produced on the farm, with the varieties Nocellara dell'Etna, as well as the chestnut honey comes from bees in the Woods around the farm. The meats and cheeses come from farms of Etna. All products that are processed by the creative hands of Wayne Cannon. The chef, 24 years of Syracuse, She trained at the hotel Institute of Syracuse; seguto, He worked at the old farmhouse of the Alta Murgia, in Puglia, then another Vissani in Orvieto (Umbria) and, Finally, in Modica at restaurant East Tower. Very young and very related to the Sicilian culinary tradition, Giulia has a hand already secure and able to create meals but tasty with raw materials that chooses (or collecting) personally. 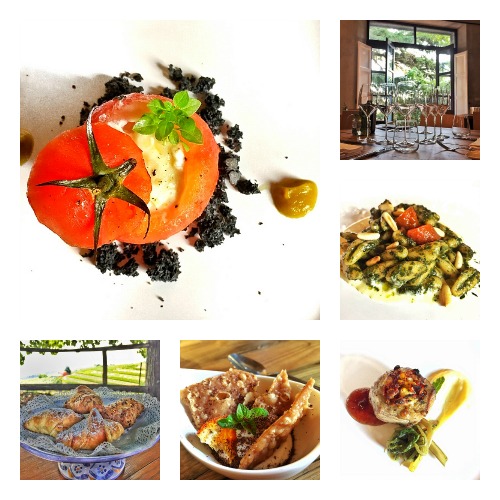 THE TAVERN – Throwing your heart over the obstacle, Marco and Barbara decided to give life to a tavern, serving dishes created to enhance the wines. Don't expect the typical and abundant portions of Sicilian farm houses: Here the tasting menu (at 40 euro) It is composed of four courses and is born in direct connection with the six wines that are served at the table. The environment, the former stable of the Palace, is full of light, with high times and nice tables, made from the wood of some old casks that were in the historic wine cellar, and that have been deleted to make room for the newer ones.

Scenic and well built “the tomato on sciara” (the volcano's lava trail), dish dedicated to mount Etna and its colours: ragusan hoax inside a tasty Vine tomato, land of black bread with activated carbon, cream of peppers and onions. A successful recipe, reinterpreting the caprese di bufala, both in terms of chromatic, and taste. Lightweight and simple the first plate: gnocchi with pesto on cream cheese ragusano, with candied tomatoes (homemade) and toasted pine nuts. The extra gear comes definitely from candied tomatoes, sweet and juicy, that balance together with the savory ragusan cream the slight lack of salt dumplings. The best dish, What to eat again and again, was the pork tenderloin stuffed with dried tomatoes and cheese: a recipe technically without flaws, balanced ingredients, with a high quality pork tenderloin cooked to perfection. Unusual version of a Sicilian cannoli dessert, broken down into its components: ricotta cream, zest of cannoli, chocolate and candied orange. Among the wines, a note of credit goes to the Etna bianco Doc superiore (for the 90% Carricante): an exuberant wine to perfumes (white flowers and fruit) and for clarity of taste, with a perfectly balanced acidity with alcohol. If, then, you want to treat yourself to an exciting time, You can ask the staff at the Inn to open a rare bottle of spumante metodo classico obtained with Nerello Mascalese. The cost is as high as 480 euros per bottle, that opens à la volée (with the special and famous Sabre) directly from Marco Nicolosi. This wine, that can be eaten only in the cellar, comes from an experiment. Twenty-two years ago, Carlo Nicolosi, Marco's dad, He wanted to confront the art sparkling wines, and bottled this Chardonnay that Carlo jealously guards in few and expensive specimens.

Travel itineraries: Along the way...

Reviews: from Plan B to Syracuse...

But what a nice surprise at the slopes, It is certainly not for everyone, the prices are very respectable, but it's nice to know this excellence.
The next time I go over there maybe make a trip just to see.
Nice article, Greetings.
Luciano Bush

hello Luciano! It is a very beautiful place. They are springing up many Mount Etna neighborhood, also because it is becoming very fashionable wine made the volcano. I'm always glad when born seats so because our country has a great need for quality tourism and structures at. Go to visit the winery, the lunch, including six wine pairing, It costs 40 euro and I recommend it. A dear greeting, ADA