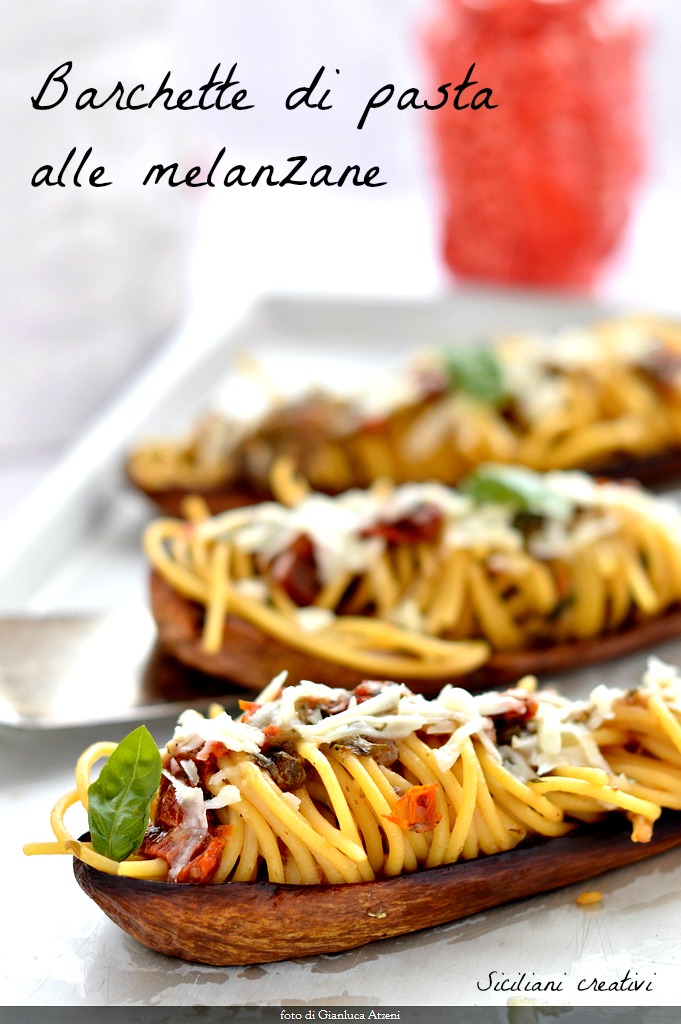 Eggplant boats stuffed with Sicilian pasta. A recipe inspired by the flavors of Sicilian cuisine, in summer, sees its most representative vegetable in the aubergines. And I'll also leave you the VIDEO RECIPE step-by-step of the entire process. Today's recipe is clearly inspired by the use of Sicilian dried tomatoes, Eggplant pulp (I will never understand why the chefs call it “Eggplant caviar”), of capers, anchovies and provola dei Nebrodi. The whole thing is obviously served inside the Eggplant, baked and emptied, so you eat even the container, it becomes slightly crisp.

Pasta boats with Sicilian eggplants are a delicious dish that will make you make a ingurone with your guests. Except for the time it takes to bake the eggplants (about 40 minutes), This recipe can be prepared in 10 minutes flat and has all the perfect Mediterranean flavors to dine on a summer evening with a nice glass of white wine.

Of course you can cook and empty the aubergines in advance (even a day) and I assure you that these boats are very good both hot and cold: in VIDEO RECIPE I'll show you how to empty them without breaking the peel. If you were a true lovers of eggplant, You might prepare for the second plate also CAPONATA AUBERGINES SICILY. What else to say? What you need to have a look at all my SICILIAN RECIPES and at RECIPES WITH EGGPLANT to enjoy all the goodness of my island. Have a good day! 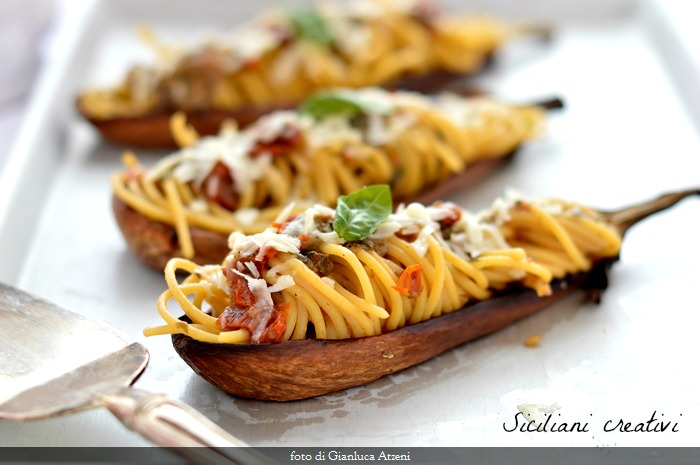 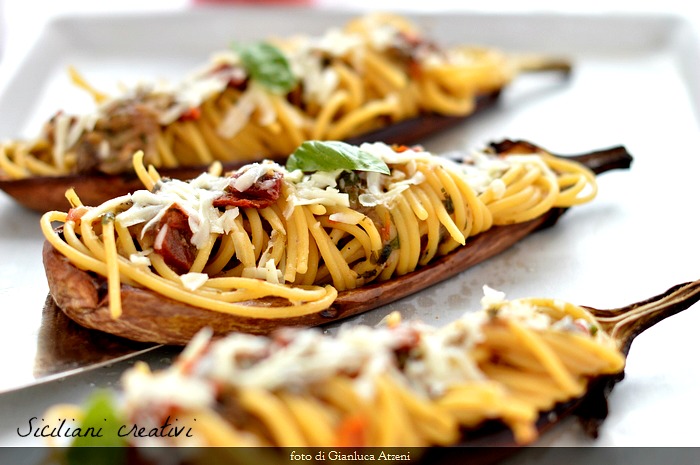 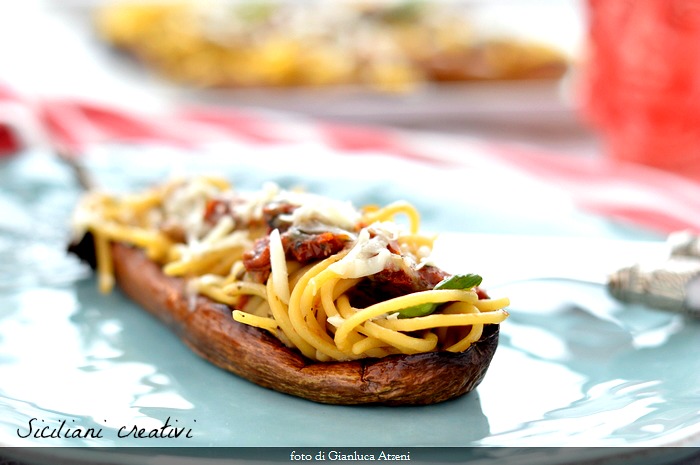 100 grams of dried tomatoes in oil

a handful of capers or Salina

a bit 'of fresh parsley

oregano fresh or dried, to taste 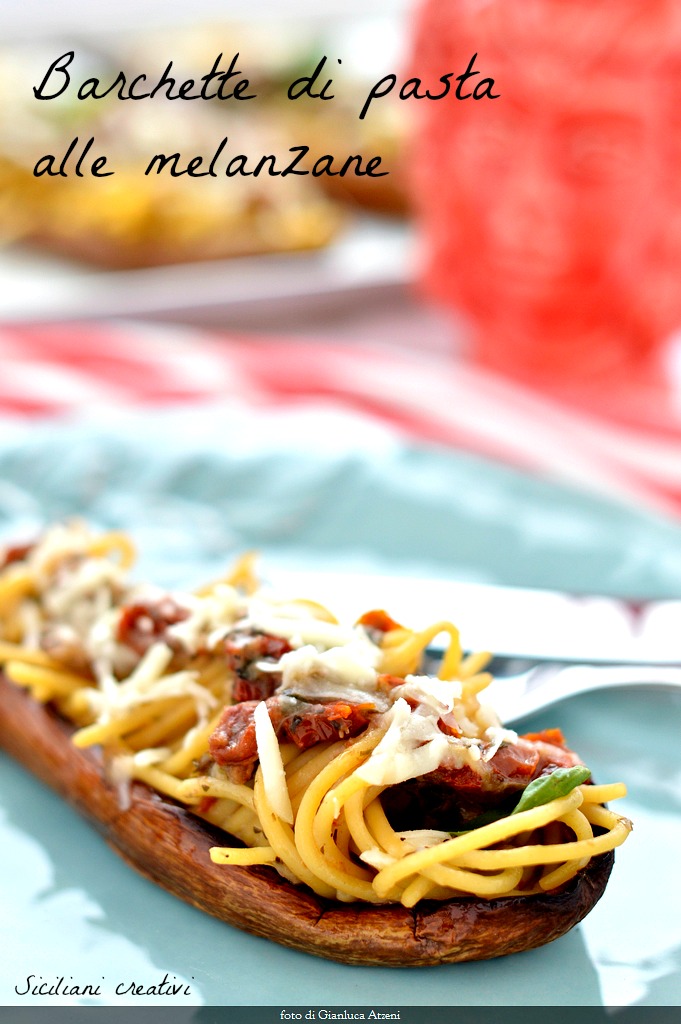 To prepare the boats of pasta with aubergines Sicilian must first preheat the oven to 200 degrees static. Wash the eggplants and cut them in half lengthwise. Cut them deep several times with the tip of a sharp knife, as you see in VIDEO RECIPE. Then season them with extra virgin olive oil, Salt, pepper and oregano. Cook for 30-40 minutes, until the flesh won't be soft and lightly browned. When the Eggplant is cooked, scoop out the pulp with a spoon, being careful not to puncture the shell, to hold the dough. Put the Eggplant pulp aside.

Finely chop the garlic (or if you prefer you can leave it whole and take it off after it is browned), Sun-dried tomatoes and pepper. Brown the garlic and chilli in a pan with extra virgin olive oil, low heat. When garlic is golden, Add the sun-dried tomatoes and the chopped Eggplant and sauté for a few minutes over high heat. Add the capers, then Deglaze with white wine. Evaporate the alcohol part, taste and season with salt. Add the parsley and cook a few minutes, until the sauce won't be narrowed, then turn off the heat and join the hand-broken basil and oregano.

Boil the pasta in salted water, drain it al dente and dress with the sauce of Eggplant. With the help of a fork and a ladle, roll the dough and place it into the Eggplant shells, as you see in VIDEO RECIPE. Complete garnishing the dish with plenty of cheese and bake at 180 degrees for a few minutes, not until the cheese has melted. Bon appétit!

MATCHING: "Dettori white", produced by Spinifex (Sennori, province of Sassari). A white Vermentino (100%), cultivated with ancient vines like small trees in the hills of Sennori, looking over the Gulf of Asinara. The company led by Paolo Dettori follows biodynamic methods, uses no chemical additives or wine filtering techniques, does not use sulfur dioxide and relies entirely on straightforwardness and naturalness of the grapes and the peculiarities of how may offer land and climate.

Swordfish in a Bain Marie Messina