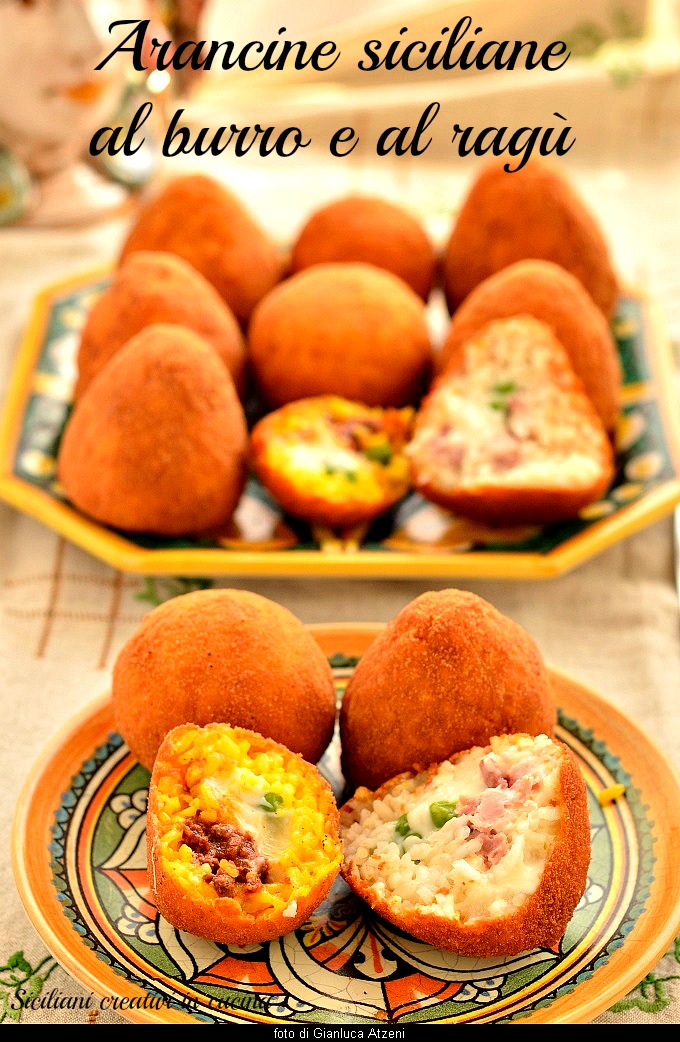 The recipe of Sicilian buttered rice arancine, one of the two most popular versions of this traditional street food, He became one of the symbols of Sicilian cuisine in the world. More delicate than RAGU RICE ARANCINI’, these rice arancines enclose a soft filling made of béchaellae, cheese, peas and ham. My grandmother, Palermo, instead of ham often put meat agglassata (ie cooked with white wine and onions) frayed. Now, as you see I have called this recipe “Sicilian arancini”. But for me that are Messina are and will always “Sicilian arancini”.

The procedure to prepare the arancini you can find in this VIDEO RECIPE.

The sex of this recipe symbol of traditional Sicilian cuisine are fought fierce battles, but I have to live and let live. Half Sicilia calls them and always call one way and the other half in another. In the case of buttered rice arancine, the risotto is a risotto alla parmigiana, well seasoned with butter and plenty of grated Parmesan cheese. Many people call 'white arancine' and Sicily are greatly appreciated. On my channel You Tube, You can find the VIDEO RECIPE step by step traditional rice arancini with ragout with all the procedure to be followed also in the case of butter. I leave the family recipe of the traditional butter arancine.

As always: in the risotto I don't put eggs as Binder, because the Carnaroli (the only type of rice that I recommend you use) releases starch and butter and parmesan tie him perfectly. But if you want to feel more confident, You can add to the risotto two yolks stirring vigorously and then proceed according to the recipe.

To be perfectly “sicilian style” I recommend you also try the sensational TRADITIONAL MESSINA RICE ARANCINI in the typical pyramidal shape, with mortadella in the stuffing and the sauce inside the risotto. And have a look, Obviously, all my SICILIAN RECIPES. Have a good day. 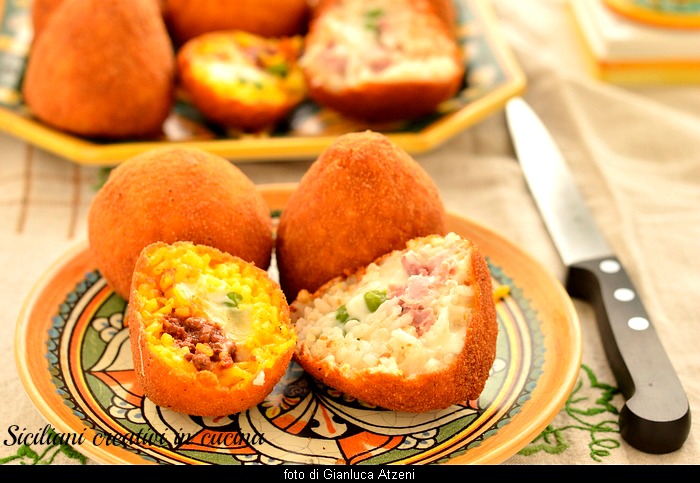 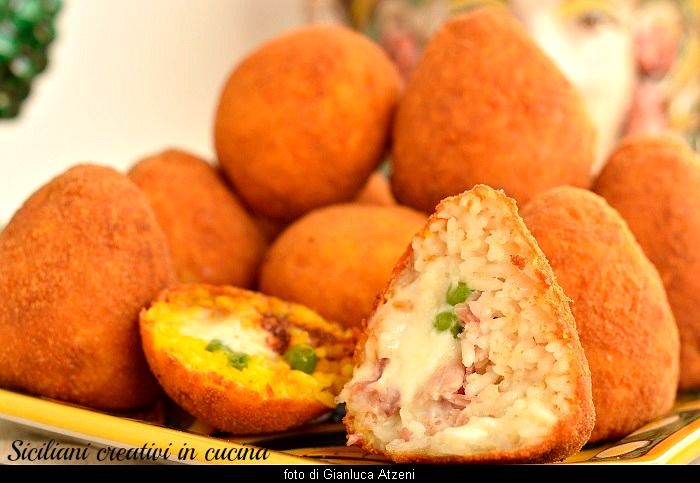 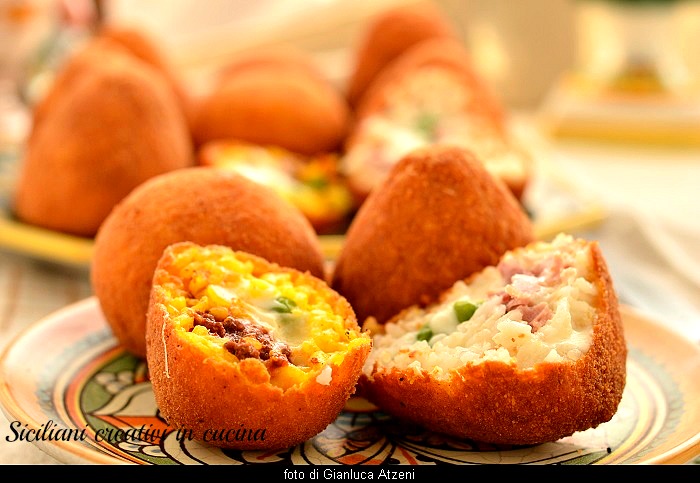 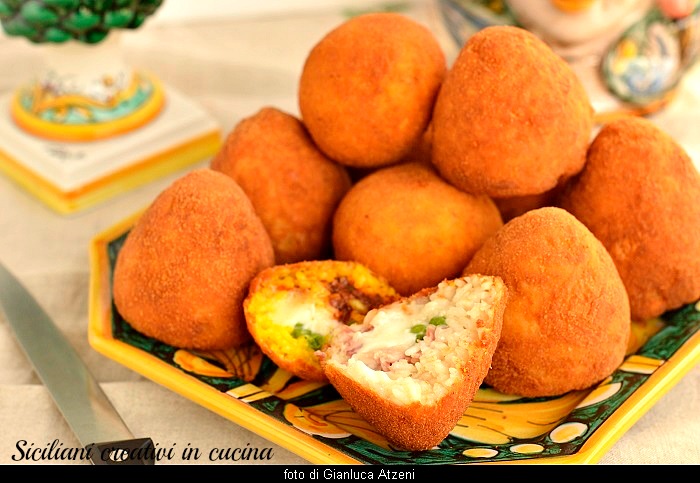 200 grams of scamorza or provolone cheese

150 grams of ham of excellent quality (I use terracotta of culatello, It's awesome)

To prepare the traditional recipe of butter arancini, first of all make risotto: chop the shallot and let it wither in a saucepan with the oil, Add the rice and toast, then Deglaze with white wine and, When the alcohol has evaporated, start cooking by adding hot water or light vegetable broth. The risotto arancini to always be cooked al dente, because it is important that the rice is al dente because then it will have to rest and be fried: then you have to cook it at least 7-9 minutes less than usual.

Stir vigorously with butter and Parmesan, then spread the rice on a platter or a tray in a thin layer and allow to cool completely (at least 3 hours, but all night keeping it in the refrigerator).

Coarsely chop the ham, cut the cheese into cubes.

Composition of the Sicilian arancini butter: take a handful of rice and, holding it in the Palm of your hand, obtain a flat 'conca' about one centimeter thick. Put a generous spoonful of bechamel, Add the peas, cheese and ham. Then take another portion of rice and place it on top of the filling, crushing the arancina in his hands until he forms a ball the size of a tennis ball, adding a little risotto if necessary so you don't let the filling out.

For the Breading of Sicilian arancini according to the traditional recipe to prepare three dishes: one with flour, one with the two egg whites and the whole egg well beaten and slightly salty and one with the bread grated. Pass the arancine first in flour, then in the beaten egg and finally in the grated bread. You can fry them immediately or store in refrigerator: in the second case, then again in bread crumbs before frying them.

Fry Sicilian arancine with butter in abundant peanut oil. If you have a thermometer, fry at 160 degrees. In any case, frying must be done with care to fire not too high, because even though it's already all 'cooked', the heat must be able to melt the cheese inside the arancini but not strong enough to darken the outer crust too much. Considered a cooking time of about 5 minutes per arancina. Bon appétit!

Some use a breading without eggs, made with a batter of flour and water in which is dipped the kumquat before being passed in the breadcrumbs. A me non convince, but it is an excellent solution for those who are allergic to egg protein.

Risotto cake with cherries at Alkermes